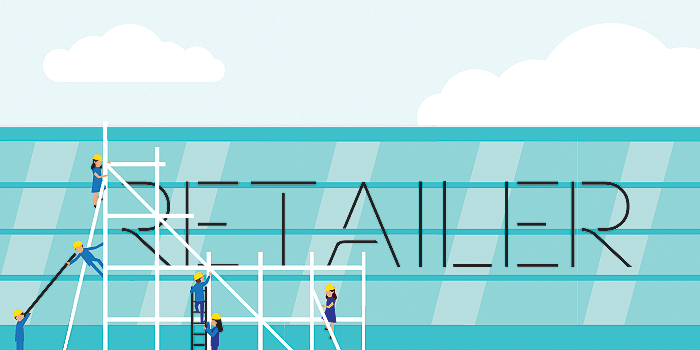 Successfully pulling off a user generated content (UGC) campaign with the use of social media is a golden feather in the cap of any retail marketer. Why? UGC campaigns have proved to be 20% more influential on purchasing decisions than other types of media. More importantly, social media makes it very easy for smart retailers to execute affordable and effective UGC campaigns.

The best part? Not only will your fans’ social media posts (with them using your product of course) be visible to you, they will be visible to all of their friends and followers on social media too. Smart move, considering 84% of people trust opinions and recommendations from people they know over any other form of advertising.

Using UGC to showcase your products, whether it be as part of a specific campaign or hosted on your website, can significantly improve sales performance. One brand discovered customers were 6 times more likely to purchase a product if the page included pictures from social media. With that in mind, we’ve collected some of our favorite social media based approaches to UGC from various retail brands for you to take inspiration from and start maximizing your social ROI.

About 6,000 videos a day are posted to YouTube with ‘GoPro’ in the title, and this ubiquity helped to triple GoPro’s year-on-year views on the platform in 2014. It now posts up to four videos on their own YouTube channel every day, with most of the content being filmed and uploaded originally by customers. This UGC-driven social growth comes alongside the company’s revenue increasing from $234.2 million in 2011 to $987.5 million in 2013.

https://twitter.com/GoPro/status/565253878598631426
Electronic goods company Belkin partnered with LEGO to make a phone case with a lego back that people could build on. First, pause for a second and think how fun that could be. Wow. To share the possibilities, they encouraged customers to use the hashtag #LegoXBelkin to share their myriad of inventive (although perhaps not practical) creations.

Takeaway: Use your customers’ creativity when possible. They may come up with some things that truly astound you, as well as their own followers. Even if you’re not teaming up with Lego, their creativity could be used for suggestions, quotes, or enjoying your product in scenic locations that you’d want to be associated with.

Need a new pair of glasses, but aren’t sure what would look good on you? Warby Parker will send potential customers five pairs to try on for five days with no obligation to buy. It then suggests you post pictures of yourself trying them all out on your social media profiles to see what your friends think. These spectacle selfie are a win-win for both the consumer and the brand. The consumer gets to try out a mix of products for five days with no commitment, Warby Parker gets free advertising as people share their speculative spectacle samples with their friends and followers.

Takeaway: Let people try different versions of your product and see what their friends think. The element of choice sparks interactions which will keep your product placed firmly in peoples’ timelines.

Tieing in with its reputation as a brand for people who want to be seen as someone different, Dr Martens #StandForSomething campaign encouraged customers to be proud about their passions and beliefs. The integrated campaign sought the opinions and stories of real life wearers of their shoes, and used these to represent their brand to the world. The campaign delivered 75,000 film views and contributed to the most successful sales month in the brand’s history.

Takeaway: This campaign let Dr Martens customers showcase a deeper side of their personality, it tied in with something that meant a lot to them and developed a strong sense of brand loyalty.

Ever see someone wearing a whole outfit that you simply must own this second and cannot wait one second longer before ordering it? Fashion retailer LookBook pick an Instagram user who is wearing their clothes and puts them in a gallery on their site with links to where you can get the clothes from. Within seconds a customer could see a look they like that was posted by, then bulk order all the garments from it.

Takeaway: Curate real customers’ content on your site and link to buying pages. Also, by featuring top looks on their site, influential users are encouraged to tag LookBook’s social channels and drive traffic there. 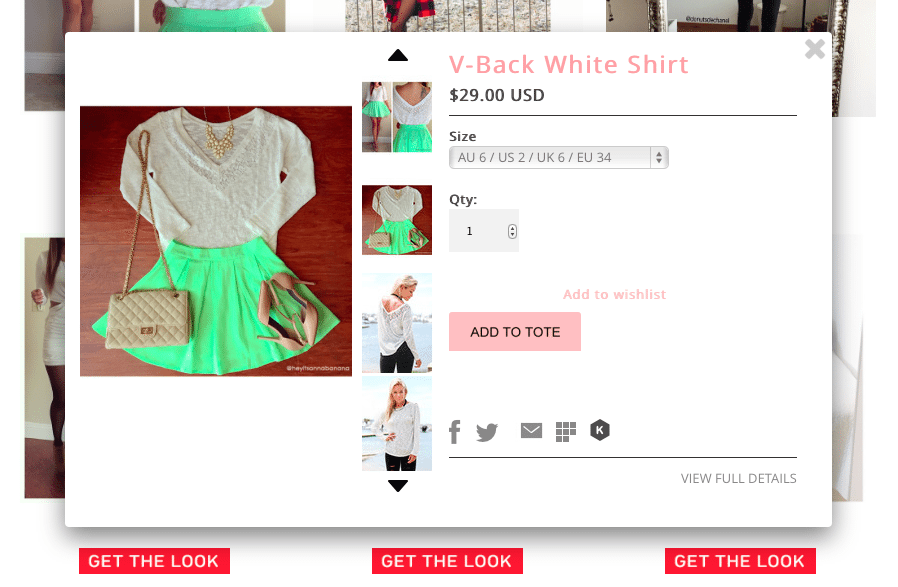 5. Let All Customers Parade The Product

Similar to the technique used above, except it’s for individual items. Black Milk and ASOS host multiple pictures from social media of people wearing the clothes on the buying pages of those individual items. Black Milk will even send hand-written letters and postcards with orders saying they can’t wait to see the pictures, and letting them know what hashtags to use for the specific pieces they’ve bought. This combination of UGC with e-commerce provides a rich media experience for the consumer that goes further than just reviews or comments. It can yield results too, as Dessy.com saw an engagement rate of 30% for the web gallery that it dedicated to UGC.

Takeaway: Share responses for each individual piece to help build brand trust, it shows that the products you are selling are ones that real customers have been enjoying. It also helps to kick start numerous conversations about your products. 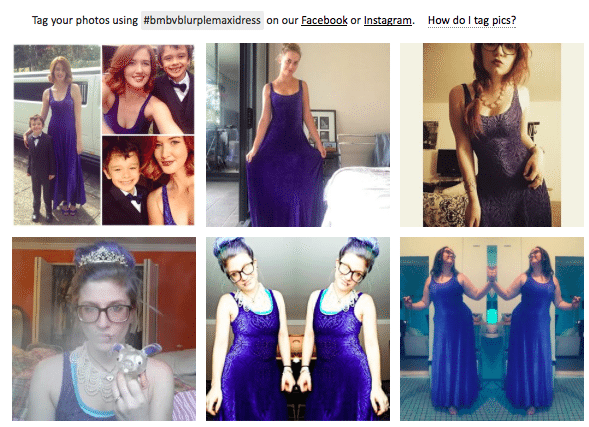 UGC appearing on the purchase pages for Black Milk

The #AsSeenOnMe UGC appearing on the website of ASOS

Whole Foods Market’s #CourageOfOne campaign was a large drive to raise money to help alleviate global poverty, while tying in with the release of the new Hunger Games film. As part of the campaign they asked people to design a shirt that tied in with their campaign’s theme, with the winning design being chosen by the film studio and put on sale with proceeds going to the charity.

Takeaway: Give people an incentive to create content for you. This competition had the dual benefit of the designer’s work being exposed to a large audience, as well as the purpose-driven charitable factor which ties in with the brand’s ethos. This gave budding designers the desire to create high quality visual content that spread the message of the campaign.

To promote their #WeAreTipped campaign, Fred Perry encouraged users to submit pictures of themselves wearing the famous tipped shirts. The entries were all put into a large collage on the site where visitors could vote for their favorite, this also meant that entrants could link to the site from their social profiles while encouraging their followers to vote.

Takeaway: A UGC collage like the one shown below can encompass a wide breadth of people who will all be driving traffic to your site. The competitive element also encouraged influential everyday fashion lovers to post pictures of themselves in the brand’s clothing, placing Fred Perry as a desirable brand at the heart of their target audience’s mindset. 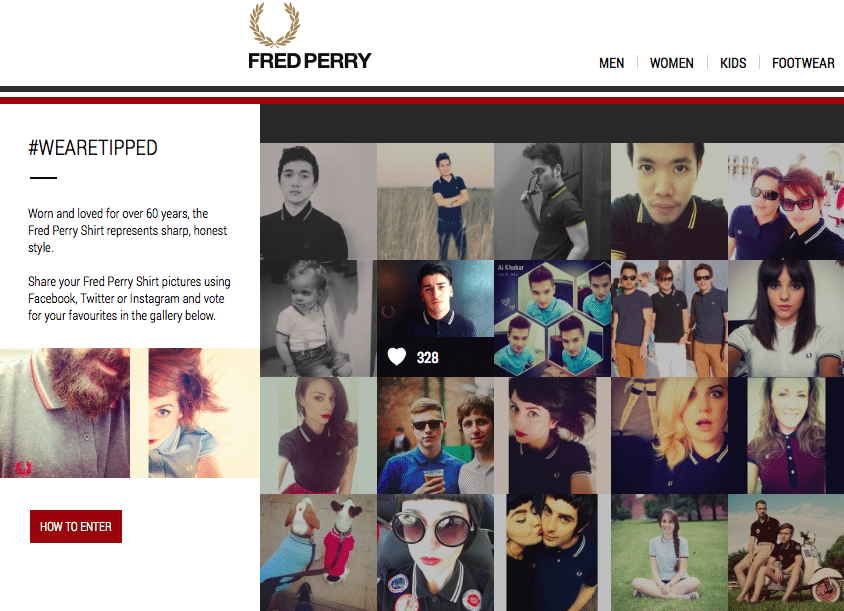 Toys R’ Us lets you browse their site to create boards of all the toys (and jigsaws and games and consoles and candy…) a child big or small could possibly want. These smorgasbords of playtime desires can then be posted to Facebook or Instagram with a link to your boards. This both shows off the products available, and the lists benefit the consumer by keeping all of the things they’d rather like in one handy place that’s easy to share around.

Takeaway: Visual, sharable wishlists can occupy space in timelines and tempt people to look up more of your products. They can also be handy places for people to purchase from for a specific person. 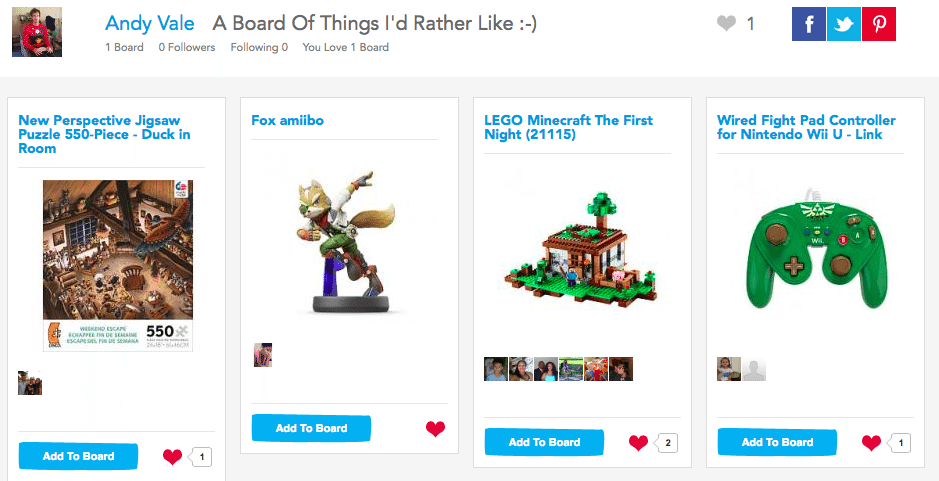 Note the sharing buttons in the top-right corner, now everyone can know what we want!

Doritos’ annual ‘Crash The Superbowl’ campaign asks amatuer video makers to produce a 30 second advert with the winner being shown during half-time of the Superbowl. The videos would be hosted on their site, with visitors voting for their favourite and a $1 million prize for the winner. Submitted ads were watched over 3.7 million times in 2013, while the campaign contributed to a 5.8% year-on-year growth in the period following the 2012 Superbowl.

Takeaway: This approach means that people are looking out for the advert during the Superbowl, and the voting element meant that people were engaging with the adverts and sharing them before they were shown on TV.

These ideas can all be tweaked to fit a variety of different brands, helping to drive sales and awareness via your social channels. What are your favourite UGC campaigns?