[Interview] @leaderswest: ‘Twitter became my favorite social network because of the tools that are available’ 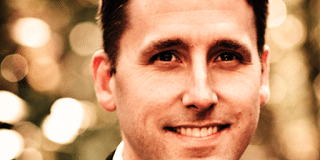 “I entertained the thought to have a career in social media, but I don’t consider that my profession.” “…I’m a professional vagabond”, says
Jim Dougherty , founder of online publication Leaderswest . An interesting character Jim has experienced a diverse range of professions throughout his career: Logistics Military Officer, Pharmaceuticals Sales Assistant and Father of two; just a glimpse of the many.

In this exciting interview Jim shares his insights on effectively using the Twitter tools available to enhance business and customer relations and explains to us just how he got to where he is now. Over the years Jim has successfully grown his Twitter community and built up a significant following. When asked how he built up his influence he says “I don’t know how influential I am, but I imagine that whatever influence I have is a product of the distribution that I have because of content tools...”.

Jim, you are very recognisable in the social media world and especially in Twitter, how did you build your influence?

I was doing some small business consulting work for a couple of companies that weren’t seeing a lot of business growth. So, I stepped out of my comfort zone and started studying how businesses externally grow their customer base. Social media is a hot button topic and I got very interested in it. And there are a lot of parallels between managing people internally and marketing to people on these platforms, especially as it relates to finding inefficiencies.

Twitter became my favorite social network because of the tools that are available. I relied on tools like TweetArchivist , SocialBro , AutoTweeterPro , BufferApp and GrabInbox to interact with people and to publish content, and of course that has evolved through time as some tools have fallen by the wayside.
I don’t know how influential I am, but I imagine that whatever influence I have is a product of the distribution that I have because of content tools like Triberr and the quality of content that I produce. To clarify “quality” I simply mean that I write about topics that people want to read about – in my instance I write about different research that companies do around social media and digital marketing.

Could you give our readers any tips on how to build up their influence?

I think influence is a very opaque concept, despite the business around trying to quantify it.
The best advice I can muster is to know what you have to offer that other people value . I grew my Twitter account to a few thousand followers and was able to leverage that to join quite a few groups on Triberr. My involvement in Triberr grew my site traffic to the point that a backlink or increased distribution would be valuable to people, so I changed my site to a multi-author site. Having a few hundred contributors has made the content much richer, and it requires much less effort on my part to maintain quality content on a daily basis. Any business or person could do what I’ve done.

But if you’re into Klout scores – I raised mine pretty significantly at one point by using SocialBro exporting my “Friends” list to .xlsx, drafting tweets to all of my “friends” in a spreadsheet and importing them to HootSuite, AutoTweeterPro or GrabInbox. Trying to raise your Klout score is kind of a silly exercise without purpose, though.

In your opinion, why and how should small businesses invest in social media?

I think all businesses are different with different needs . That said, in general small businesses need to have an actively growing email list before they do anything social. Social fans should be regularly invited to join an email list, because email consistently outperforms social media for sales conversions.
In terms of social media, small businesses with a local footprint should be relentlessly focused on targeting local users, which is one of the ways that SocialBro is a hugely valuable tool. The SocialBro targeting tools are exceptional. Businesses should also be updating Google Plus and Google Plus Local.

I also caution businesses about buying too much into the “engagement” mythology. A lot of people like to write (and I’m occasionally guilty of this) that “engagement” with social media connections is crucial. While there is some truth to that, the majority of people don’t pine to interact with businesses on social media. They want Social Care (customer service via social media channels) or deals. For a business to put emphasis on social chatter in lieu of what customers truly want in these channels could be counterproductive or hinder the effectiveness of these.

What would you say are the most useful Twitter tools for community managers and businesses on the market?

I use HootSuite, not necessarily because it’s my favorite tool but because they have a very positive track record of working with Twitter, Facebook and Google Plus, so it’s unlikely to go the way of TweetDeck and many other third-party tools that have died an untimely death. I use ManageFlitter and SocialBro to target, follow, purge inactive users. Incidentally, I don’t concentrate too much on who follows me back. I find there are always enough inactive users to unfollow so that I can follow who I’d like to.

I also use SocialBro to export Twitter user data to analyze to Excel , and I love AutoTweeterPro to Tweet directly from said spreadsheets. I use Triberr primarily for content curation. I just watched a preview of BundlePost today and I’m very impressed with the ease of use of their updated app (specifically for content curation although it does much more).

What advice would you give to small businesses starting out on Twitter?

People expect a response from businesses within two hours of a Tweet – so if you’re going to be on Twitter make sure you can accommodate this. Also, pay attention to how Walgreens is doing Social Care – they’re a great example to aspire to.

What are your predictions for the future of Social Media?

I don’t know. I think there is good evidence that Facebook is the biggest network for the foreseeable future (based primarily on Stephen Wolfram's recent research), but the allegiance of the digital native generation (Gen Z) is in question. The recent acquisition of Instagram by Facebook and Tumblr by Yahoo certainly give credence to that. So, I expect that as teenagers go we all shall go sooner or later. But I don’t see any social network significantly changing their prospects without a consensus shift by teenagers and college students to the platform.

What was the idea behind the creation of Leaderswest?

The name itself was nonsense. I secured a bunch of domain names on a whim many years ago and that was the one that appealed to me most when I was starting my consulting business. I stylize the title “leaderswest” to diminish the fact that the content has little to do with leadership or geography.

It’s morphed from the name of a business (which I’ve since dissolved) to an online publication where I publish quite a bit of information on social and digital media from a variety of sources. And I’m really proud of it – I find a lot of really rich, insightful content that doesn’t get the distribution that it deserves and give it greater reach. Hopefully people are introduced to great points of view and insights that they otherwise wouldn’t be on my site. Just this week I ran (translated) articles contributed from writers in Spain, Germany and the Netherlands – and those are particularly special to me because English-speaking readers probably haven’t been exposed to these writers.

What’s next for Leaders west?

I enjoy what it is now. I may experiment with it further (and will definitely add more authors), but a multi-author site about digital marketing is very gratifying to manage and read. I love what it has become.

The biggest changes for me will come from unrelated ventures. Having anything remain stable in this world of digital flux is a luxury, so I’m fortunate.

Previous Story
← SocialBro integrates with Salesforce and Nimble to become a key part of your sales process
Next Story
Introducing Mention Helper, making it easier to connect with your Twitter community →