The first Spider-Man movie produced by the Marvel Cinematic Universe as a result of an agreement between Sony Pictures, Marvel Studios and Disney was recently premiered and released throughout the world. Here at Audiense we knew we had to do what we do best and analyse the #SpiderManHomecoming audience* in effort to disclose and deliver consumer insights to the entertainment sector.

The relationship between the audience and the brands

It was fascinating to uncover the affinities between the new Spider-Man movie and the large brands involved. These affinities are particularly interesting when viewed from a sponsorship and partnerships perspective. This social data is usually a good indicator of whether association with a brand will result in a lucrative relationship. 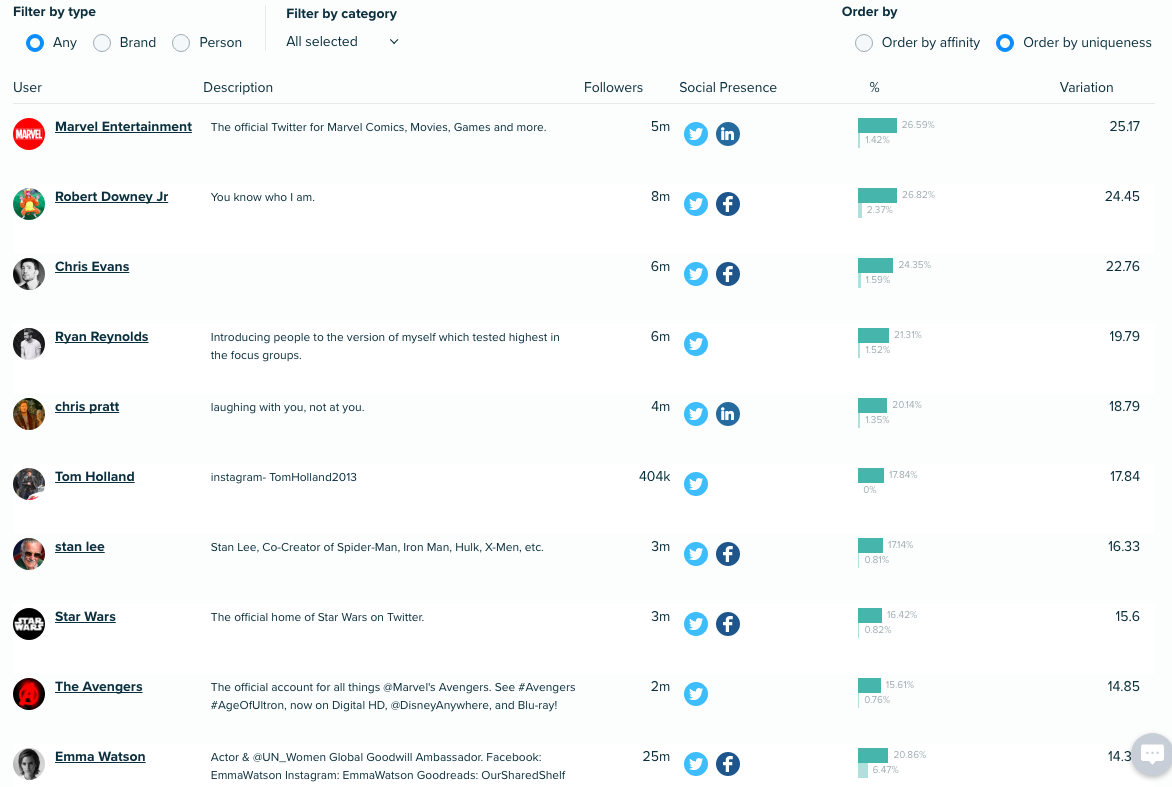 Understanding the audience and its segments

Having analysed the Spider-Man movie audience we were able to reveal several common interests amongst the demographic in question in comparison to the global population. For example, we identified a segment to be more interested in cinema, television and literature, whilst being inclined towards video games in comparison to the rest of the population. As for specific television genres, the audience showed a higher affinity towards cinema and science fiction compared to Twitter’s global audience. They also demonstrated a lower interest in sports, business and fashion.

With regards to the question surrounding the general age of the audience, there is a clear predominance of millennials joining in on the #SpiderManHomecoming conversation. Almost 80% of this audience was identified to fall between 21-34 years.


Interested in segment personalities, interests or even consumption habits? Why not explore sample reports by signing up to an insights trial!

Have you ever wondered… What would be the best way to reach your audience? What is their buying mindset? The Audience Intelligence report categorises the buying mindset based on the probability of influence demonstrated by brand names, product utility, online advertising, social media exposure and word of mouth.

For instance if you are a car brand or a brand in any other sector that is interested in promoting a new product to the audience of the new Spider-Man movie, it is evident from the data below that this specific audience places a greater importance on what is said about a product or service on social media over all other aspects.


The Insights report based on Spider-Man Homecoming audience has revealed a variety of interesting facts in addition to those mentioned above. To have an in depth look at this report or any others click on the image below.

* The #SpiderManHomecoming insights report was based on interactions between July 4 and 9, 2017.

** Within each segment there are a number of accounts which are considered to be the most unique (or most relevant) for a particular segment.