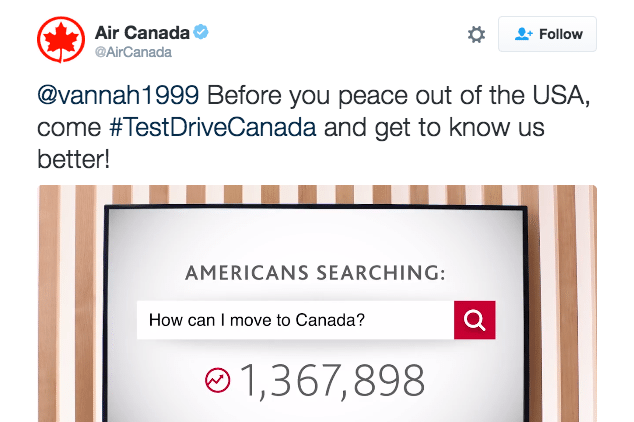 It’s been busy in the world of social media. Cannes Lions may be in full swing, but we’re making sure our eyes are peeled for the best campaigns currently underway on social and beyond. To kick off, we have Air Canada asking Americans to #TestDriveCanada before they decide to move in, Disney Pixar has launched campaigns worldwide for #FindingDory, Dominos is making gamers go ga-ga while Pepsi has recreated their old spot with Cindy Crawford, this time featuring her as an emoji.

All this, plus other Social Trends that Team Audiense have been reading about.

We are absolutely in love with this campaign, and want to thank the American public so exasperated by Trump’s success for the inspiration. JWT Canada have launched a new digital campaign for Air Canada called #TestDriveCanada. They are asking Americans who have pledged to move to the country if Trump wins the presidential election to first get a taste of Canada and head to their country by flying Air Canada (of course).

The Twitter videos are in ‘reply’ to those Twitter users who at some point have shown an interest in moving to their neighbouring country, including celebrities like Lena Dunham and Ariel Winter.

Talk about riding the wave, JWT and Air Canada!


Dominos Get A Slice Of The E3 Action

With #E32016 - gaming's biggest annual event - in full swing and dominating the trends, Dominos have made note of the long-understood bond between pizza and gaming.

With some expert design and a touch of humour, their Promoted posts have driven thousands of Retweets from gamers who respect the effort they've made to deliver high-quality, relevant content about two of their favourite passions.

With Final Fantasy, Pokémon, and Call Of Duty games already pizzafied, we're looking forward to seeing what comes next!

Disney Pixar's #FindingDory campaign is taking the world by storm. Quizzes, paper craft tutorials and Google searches is resulting in lots of engagement on Twitter.

Meanwhile in other countries like Spain, we enjoyed the perfect mix of offline and online marketing tactics in Utopia, a Spanish music festival. Disney Spain decided to sponsor the "meeting point" for people who got lost, allowing them to upload a photo via Instagram and Twitter with the hashtag #buscandoADory - including a customised logo of the movie.


Pepsi ask you to #SayitwithPepsi and invites you to BBFBarcelona

As a part of their campaign #SayitwithPepsi, the soft drinks brand has surprised us this week with a remake of their iconic 1992 Super Bowl commercial with Cindy Crawford. In the remake, she features as an emoji! Pepsi has done a great job of inserting their legacy into today's social media generation with #PepsiMoji. In the US, the brand has been asking people to take part in the campaign to be featured on the Pepsi Times Square Billboard.

While in Spain, to celebrate the Barcelo Beach Festival this summer, Pepsi Espana is asking people to follow them on Twitter and use the hashtag #MAXVERANO to win tickets plus 500 Euros.


What Team Audiense Is Reading -

Instagram’s users grow from 300M to 500M, with 80% of the users living outside the United States.

Michelle Obama is officially on Snapchat, and will be snapchatting all her travels to Liberia, Morocco and Spain for the Let Girls Learn trip.

The famous six seconds championed by Vine is soon going to be changed to 140 seconds. Vine has now introduced longer videos with #BeyondTheVines.