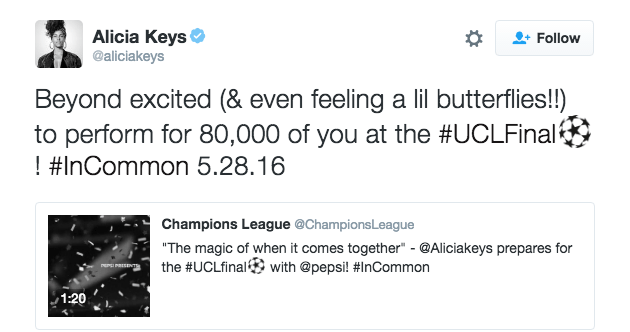 Alicia Keys is all set to be the first ever musical headliner at the world’s most watched sporting event. She’s going to perform at the opening ceremony of the UEFA Champions’ League. We talk about her #InCommon campaign with Pepsi. Meanwhile, you can grab a bar of snickers for a low price if Twitter gets angry, and we bring you the best brand Tweets for #TowelDay. We also have the charity Missing People using Twitter to #FindEveryChild. All the Twitter Trends, plus what team Audiense is reading in this week’s round up of the best social campaigns.

Look at the video below to see what inspired her to write the song, and how music and sports can be so closely linked together.

The three have taken to Twitter to spread the message of #InCommon, and no doubt, promote the opening ceremony which will be watched by fans all over the world.


One For Snickers Fans

Want to buy a Snickers bar for as low as 80% of its original price? Just use caps lock and angry emojis on Twitter! Snickers are using an algorithm by Massachusetts Institute of Technology called "Hungerithm” that monitors the online mood and changes the price of the bar accordingly. The advertising campaign that is focussed in Australia also ensures that the algorithm picks up on Aussie slang and sarcasm.

Fans all over the world celebrated Towel Day on 25th May, in honour of novelist Douglas Adams, the author of Hitchhiker's Guide To The Galaxy. And brands, of course, had their say on Twitter.

Registered charity Missing People have launched a heartfelt campaign on Twitter to spread the message of the many missing children in the UK. Calling it the Big Tweet 2016, the charity joined hands with celebrities such as J.K Rowling and Simon Cowell on International Missing Children’s Day, which fell on 25th May.

For 24 hours on Wednesday, the charity Tweeted a single missing person every half hour, and encouraged #TeamBigTweet to retweet it.


Coral Makes An Offer You Can Refuse…

The Premier League season wound to a close recently, as Manchester United faced Bournemouth in the final game of the season. United were put in a bit of a tricky spot, as they needed to win the game 19-0 in order to leapfrog 4th placed Manchester City in and snatch a spot in next season’s Champion’s League.

Given that Leicester’s 5000-1 title win had produced some substantial windfalls for a few lucky individuals, all eyes were on the bookies to see what odds they would put on Manchester United pulling off a record shattering feat (the current highest Premier League win was 9-0). The team at Coral thought about what they would be willing to pay out in such an event, and this Tweet earned them thousands of retweets, and undoubtedly a few hopeful flutters.


What Team Audiense Is Reading:

Twitter have announced some new changes to the content that will count in your Tweet. No more worrying too much about how to get your thoughts in 140 characters!

- Oh dear! An emoji Bible is going to be here.
The Memo

You read that right. The Bible told only in the language of emojis is going to be officially launched on May 29th. The title of the emoji Bible is ‘‘Scripture 4 Millenials’.

As the use of social networks increases, so does the richness of information about an audience down to the individual. Is it really effective to categorize people by something as vague as “millennials” when social data makes incredible insights possible?

The Drum's June edition is set to be edited by IBM Watson, one of the most advanced pieces of artificial intelligence on the planet. A big feature will be an interview with David Ogilvy, using IBM Watson's technology to provide his answers. What would you ask?

- The Top 30 Social Media Articles You Need To Read
Wishpond