ARRGGGHHH! 4 Frustrating Social Media Marketing Problems, and How To Solve Them 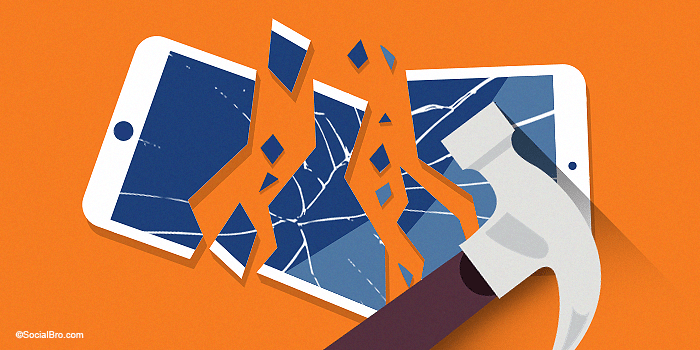 We’ve asked Social Media Marketing professionals, as well as taken stock of some of the things we’ve heard or experienced down the years and come up with a list of common obstacles. Once we’d wrung out the tears, taken a deep breath, and recovered from some shuddering flashbacks we wondered what to do with this information instead of initiating a monstrous whining session, we wondered how these frustrating social media marketing issues could be solved.

My Client Is Obsessed With Follower Counts

Well, the obvious remedy for this is to please them by getting them a truckload of followers. How do you do that? That’s another post...

But an overemphasis on social media numbers can be counter-productive. Your follower count is important, but solely focusing on it can have an adverse affect on your core audience who are most likely to part with their hard-earned cash. This is something you need to express to your client. Those 100 followers they could gain from all over the globe with a topical meme post? No interest in your client’s product. Well, not necessarily, but they’re less useful than ten followers who are interested in the product and may be keen to make a purchase. It’s nice to get the former, but you can’t afford to alienate the latter.

“Social media follower counts are absolutely, positively empty. They mean less than nothing. Engagement, in my opinion, is everything.” - @KnowltonThomas of Techvibes

Strong words. His comment comes from a piece on paid-for followers, who we can all agree aren’t as valuable as real followers so the context is different. But his words about engagement being more important still ring true. What good is it having all of Twitter following you if nobody on Twitter cares about you? Not very. The question remains, how do you make your client aware of this?

Try the classic covert persuasive technique of making them feel like it was their idea. Find and compliment what makes them unique, use this to highlight how they should be attracting people interested in their quirk or niche. Get them to engage with those individuals rather than chasing the tail of every Twitter birdie that flies past their digital window. Make sure they notice the benefits of meaningful engagement with people who have an interest in their product over simply gaming the numbers.

On top of this, you could help them make their tweets more effective. Simple tips like not starting a publicly intended tweet with an @ tag can make a lot of difference to someone who isn’t aware of it. They can also improve their click through rates by having links 25% of the way through a tweet, using more verbs, and limiting the number of links they tweet per hour.

Or, learn from them to improve your own drab headlines. Upworthy’s co-founder Eli Pariser has responded to criticism of their emotionally tugging, overly hyperbolic headlines:

“What special virtue is there in letting great videos, articles, and images fall into the Internet’s abyss simply because nobody thought of the right combination of words to unlock its audience?”

He has a point, if your content is so much more (up) worthy than someone else’s trashy blog about celebrity sweat patches then why on earth isn’t your content getting anywhere near as much attention? If you’re smart enough to write an incisive 2000 word piece but not smart enough to think of a headline that will grab people’s attention then maybe your smarts are partially wasted.

Do you need to end every headline with “You’ll Never Guess What Happened Next”? No. Do we need the most rampantly exaggerated headlines OF ALL TIME? Again, no. But understand how curiosity is what drives these clicks. Most either suggest a gap in your knowledge, which you suddenly have an itch to fill, or they reference something related to the reader in some way like this one appealing to Americans and Brits. By using these tricks, along with your own exquisite content, we can create high quality pieces that also drive traffic.

Unrealistic Expectations From My Unglamourous Client

Let’s say your client is a local paperclip retailer in Nowheresville, Nevada. No offence to any remote paperclip salespeople out there, but realistically your target market isn’t spiralling off into the billions. But they still want a sudden flood of sales because they took fifteen minutes to start a Twitter profile. They’ve taken a joyous leap from optimism into fantasy, and they want you to be the wizard.

We need to look at expectation management. If they want Bieber numbers, gently remind them that they’re not Bieber. Look at similar brands in their field, look at other businesses at their industry. Find someone who slightly further along the path that they’re on, do some research to show how that’s an achievable target and a beneficial one. By showing your research and being transparent, they will have a greater understanding of the task that's ahead of you.

With a decent, realistic goal in mind you can get on with achieving it in a way that’s beneficial to the brand in the long term. Using the similar example as a muse, find the similarities your client shares and what can be learnt from them, then think about how the differences can be used to its advantage.

It’s always good to have excellent content shared, whether it’s an insightful piece of analysis or just a lighter piece highlighting something we can all learn from. But one bugbear that can crop up in timelines is self-titled social media ‘gurus’ who constantly chuck blog posts and articles up with no comment or obvious reason other than “this is something on social media”.

If you’re guilty of this, stop and think how this positions you. Does it make you a thought leader in any way? No, because you’re showing no thought. Imagine being in school and handing in a book report that simply said “I read this.” That is what you are doing on Twitter, it’s impressing nobody.

Add some insight, or comment. Why did you like it? Did you disagree with anything? Maybe their lack of an oxford comma made you scream, shout and let it all out. Even if you only have 140 characters to play with, that’s still enough to inject an opinion or a question. Interesting content is one of the top 3 reasons people follow brands on social media, make sure your personal brand adds a succinct slab of your own wisdom rather than reheating someone else's headline.

If you’re the creator of content, give these people a hand. A closing query or other call for comment not only increases the engagement on your own piece, but it will also nudge sharers to add something to the conversation.

Have we missed out your most infuriating and frustrating social media marketing problem? Perhaps you've come up with an ingenious solution to a common problem? If so, we'd love to hear from you.

Chatbot use cases that will improve your customers’ user experience