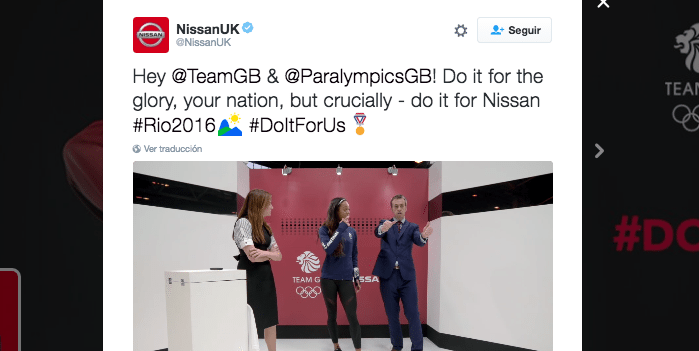 That’s it, here we go! The world's biggest sporting competition has finally started and it has dominated the conversation across all social networks. Brands everywhere are sharing their support for the athletes, who are by far the stars of the show. Keep reading to find out how Nissan pranked Team GB with #DoItForUs, get inspired with #DeffyLabels from Mini and watch as Adidas put the focus back on the game with #FirstNeverFollows.

We also have what team Audiense is reading. Look out for this, and more social trends in this week’s round up!

Nissan has been having some fun with the nation’s potential gold medalists in #DoItForUs. Their new campaign asks Team GB athletes to promote the brand in ridiculous ways during the games.

These videos are a must watch - even if it’s just to laugh at their hilarious reactions, well done guys!

Be inspired by Mini’s #DeffyLabels

Rejecting derogatory labels and refusing to let prejudice hobble your success is the theme of BMW Mini's Olympics push. With #DeffyLabels, the automotive group celebrates diversity and individuality by introducing us to eight U.S. athletes heading to Rio.

With the campaign they have also launched athlete interviews where we can hear very emotional and inspiring stories from each of them. We really enjoyed listening to Serena Williams!

Spanish yoghurt brand, Danone, has been surprising some of the Spanish athletes during their workouts. Connecting them with family and friends across the globe and sharing supportive messages from different celebrities Danone take team spirit to the next level.

Athletes like gymnast Rayderley Zapata, and hockey player Bosco Perez-Pla  have been involved in #siganatuganas campaign (which translates to if they win you win). The campaign aims to reward their hard work and perseverance over the past four years. Good job you guys!

Adidas sets the focus on the game

As a part of their campaign #FirstNeverFollows Adidas asks all of us to stop the speculation and gossip around football to let the players do the talking instead.

Well said Adidas, we are behind you!

What Team Audiense Is Reading:

Twitter, Vine and Periscope get ready for the Olympics

Emojis, moments, periscope accounts… Everything is ready for you to enjoy the Games!

Instagram takes on Snapchat with its very own Stories offering

Team GB smashes it when it comes to supporting their athletes. Share the love with hashtag #BringOnTheGreat or write a message in their website!