Hot Stuff! How NOT To Go Up In Flames During A Social Media Crisis

You left your desk for 5 minutes to grab some lunch and you come back to find that the entire internet hates you. Well well well, it looks like we have a social media crisis. That sucks. Maybe you deserved it, maybe you didn’t. Maybe it’s funny and you’re the laughing stock of the net, maybe it’s not and your company’s reputation has been deeply jeopardised. Whatever happened, it’s your job to do something about it. Time for some social media crisis management!

British companies lose an average of £46,815 a year due to negative comments online, including posts on Social Media. But you’re not the average company, you’re better than that and you’re going to get them out of this mess! Here’s a selection of important things to help you prepare for a social media crisis before it happens, respond effectively to one when it does, and learn from it afterwards. If you have any experiences you’d like to add then we’d love to hear from you.

Firstly, who has the authority to decide on the response? Who should be posting updates, and from what platform? Establish who should do what in a social media crisis so that there’s one consistent message coming. This will depend on what sort of a crisis it is, some will be suitable for the Social Media team to sort but others may require input from higher up to assess the situation first. Usually it’s someone senior in your PR/Comms team. Get a second and third in command too, just in case one is away. Following this, arrange who can tweet support and help to individuals asking questions.

Rules! Everyone loves rules! They’re there to help. Getting guidelines and rules established for your social media team in advance of a crisis means that everyone is ready to fulfill their role and minimise confusion. There will always be human error, but if certain rules were already in place and followed then some gaffes and controversies could be avoided altogether.

Common things to include in your social media guidelines include:

One rule that Fox29 could’ve had in place would be “don’t try to make tacky puns around shootings”. Guidelines to that effect, if followed, would’ve meant that newsreader Joyce Evans would not have come under fire for what many believed was an insensitive Tweet when she compared a shooting to Breaking Bad.

Your response to the furore created by a slightly unfortunate typo by an intern should be different from your response to an unforgivably offensive post by management. So have plans in place for different types of outcome, and build a flowchart to decide which one to use. Was it something that’s happened before? Was it something that was directly the company/individual’s fault? Was it internal or external? Were people harmed? Was it serious? Can you respond with humor? If you have a plan of action and an idea of how to respond to each of these you can help to minimise your response time and confusion.

It’s bad enough when you have a mocking public tweeting about you, but those problems can be amplified when a disgruntled employee tells the world that they have only just discovered some catastrophic post from their company via Twitter. Also, your frontline social media and support staff may have to deal with every wannabe comedian, grammar pedant, or social warrior who happens to be passing by. Misinformation or poor responses from your team will only make the problem worse. Attention to detail is key in making sure your team give out a consistent message.

Have you got a PR team or agency ready to explode with a real time marketing campaign? You might want to tell them to hold fire on that for now. Is any of your social media outsourced? They’re going to need to know what’s happened as well.

The longer you keep quiet, the longer the rumour mill spills out of control and the more you lose your grip over the situation. In 2009 a prank video of two Dominos employees committing vom-worthily unhygienic acts went viral, with over 29,000 views on YouTube within hours of posting. It took three days for the company to open a Twitter account to address the matter, but in that time 65% of people who had eaten at Dominos before were less likely to do so again after seeing the video. Can you blame them? As a result of this controversy, and not already being on the platform, this will forevermore be Dominos first tweet.

Acknowledge the issue and keep posting transparent updates, starting with the social network that the crisis originated from. Following on from this, show what a decisive star you are by telling people how you’re fixing the problem or looking into what happened. If you don’t address what’s happening then whispers can spread out across the Internet, and beyond your reach. When Buffer experienced a problem in 2013, they were praised for how honestly, and quickly they addressed the issue. This meant that their users knew what was happening, and the public reaction was nowhere near as bad as it could’ve been. Well done Buffer.

Get a cup, hold it against the wall, and keep quiet. If the conversation isn’t in the room next door, fear not for there are other ways of seeing what people are saying about you. You won’t always be tagged, so it’s still worth keeping tabs on your brand all across social media and not just the direct mentions. Hootsuite is a great tool for this, it allows you to add streams and monitor keywords and directly responded where necessary. SocialBro’s tools can help you keep track of what’s being said about your brand and give you in-depth feedback about who was talking about the crisis at hand, from there you’re able to add these users to a list, continue to monitor them and eventually rebuild your relationship with them.

Use Twitter’s new feature to help keep the ravenous mob at bay. A tweet noting the incident and apologizing (if necessary) is a great place to start on Twitter. By having it pinned there for a day you’re showing a level of honesty and contrition which could help you look less like a villain and more like a good person who made an honest mistake. It can also contain important information, or a link to a longer statement on your site if necessary.

“We know we’ve been bad and we’re truly sorry for the trouble and offence we’ve caused, BUT WE’VE GOT 5% OFF IN OUR SALE” Whoah there. As far as the world is concerned, you’re still on the naughty step. If you or your workers want to set up shop in our timelines again then we need to feel like you mean that mea culpa. This is another time when you might want to check those scheduled tweets before your sincere response to a tragedy is interrupted by something innapprop/“These Summer prices are TO DIE FOR!”

Check Your Past, Present, And Future Posts

Did you post something dumb? Depending on the severity of the post it may be worth deleting it, although it should still be acknowledged. It means more people won’t see it, but also highlights the point that you do not stand by whatever was posted. It’s then worth looking out for posts that may be inappropriate given the current climate, a breezy topic change minutes after a major incident could look like you’re not caring about the matter at hand and can only inflame the situation. Check your scheduled tweets, you’ll probably want to delete or postpone some of them.

It’s also worth keeping abreast of what is happening elsewhere in the news and be careful how you tread around it. In the midst of last year’s Boston bombings the food site Epicurious decided that it would be a great occurrence to piggyback onto and share recipes. 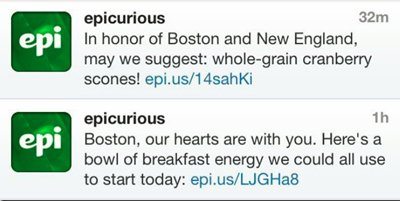 The first was bad enough, but they followed it up with a similar one half an hour later. In that time did nobody get the memo that this was a very very bad idea? Gah! Can you imagine how the Internet felt about that one? Not good.

Go To Your Room And Think About What You’ve Done

It may have been your fault, it may not. But it’s not time to relax just yet. It may still be painful to look at, but turn around and evaluate what happened. Why did it happen in the first place? How did you respond? What could be improved? Did you have a plan in place? Did your plan work? Does it need changing? Do you think you followed the right plan? Why did you do what you did? Answer these questions as honestly as you can, make changes to your plans if necessary.

What better way to be ready for next time than to practice for it? Come up with a similar situation, then role play with people pretending to be angry trolls, concerned customers, or curious journalists itching for a story. It’s also worth noting that this doesn’t need to be done after your social media crisis, get yourself extra bonus points by doing a trial run before one happens to you.

Get Back To Normal

At some point you have to move on. If you keep harping on about it you keep reminding people about it. Once you’ve made your heartfelt apology and the fuss has died down you can begin returning to regular posting. The difficult point is wondering when ‘normal’ can begin again, this depends on the severity of the issue and should be factored into your response plan… which we hope you’ve made by now.

We hope you never have to use these tips, but if you do then we hope they’re helpful. Got any social media crisis horror stories? We’d love to hear them.

Previous Story
← SMASH! These 7 Brands Aced Wimbledon On Twitter
Next Story
How To Delete Lists On Twitter →