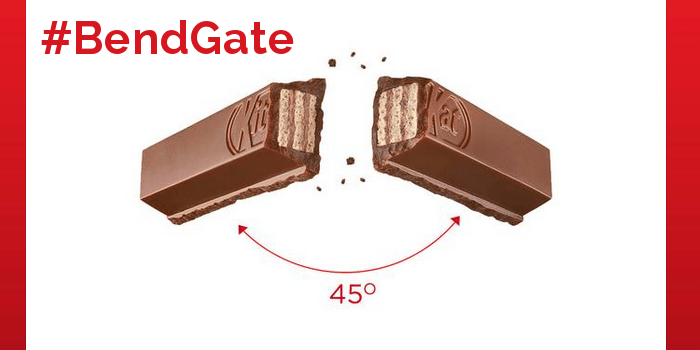 And now you’ll be singing Rebecca Black all weekend. We’re sorry, here’s our weekly round-up of the best on social media to make up for it. Happy Friday!

American Express have managed to get a mention as our brand of the week for a second time, with their latest campaign for film lovers everywhere. Alongside the BFI London Film Festival, American Express are using Vine to share snippets of obscure film trivia… on the London Underground.

Commuters on some of busiest routes will be shown these Vine videos, and the campaign will also make use of Facebook, Buzzfeed and Twitter with the hashtag #BritFilmTrivia to promote the videos. Film buffs everywhere will enjoy trivia snippets from British films such as Love Actually, The Full Monty, and Shakespeare In Love. If you want to brush up on your movie trivia, check out their Twitter!

In the wake of Apple’s #bendgate, brands are jumping in on this ample opportunity for a bit of banter. #Bendgate is the result of iPhone 6 owners Tweeting about how their phone has started to bend if kept in the pocket of tight jeans - oh dear. Of course, competing tech brands dived in with Tweets to show off their own products and enjoy Apple’s red-face. But beloved confectionery companies Kit Kat decided to #TakeABreak from the negativity and stole the show with this wonderful Tweet, proudly showing off their product. They don’t bend, they break. KitKat have overthrown Oreo as King of Real-Time, with over 27,000 retweets and 13,000 favorites - blowing Oreo's opportune Superbowl 'you can still dunk in the dark' Tweet right out of the water. KitKat are now reigning champions of real-time, who will be next?


Burberry Is More Popular Than Coca-Cola, According To Twitter

It’s been a great couple of weeks on social for Burberry, with their success during London Fashion Week. This week, the Telegraph highlighted that not only do Burberry have 6 times more followers than their closest fashion competitor, Marks & Spencers, but they’ve reached 3 million followers - beating big brand Coca-Cola who currently have 2.6 million. Perhaps it’s something to do with their fantastic use of rich media in Tweets? The battle of the Brit brands continues.

YouTube have been hard at work lately with their first ever campaign which aims to woo brands to work with their network of fantastic vloggers. They’re showing off their best YouTube stars and most engaging content to seduce brands into more collaborative work with established video bloggers. The campaign focuses on a digital push, with video and rich media placements, as well as running ads on TV, in print, and on YouTube’s homepage. YouTube’s partnerships director, Ben McOwen Wilson, claims that around the world people are watching “more than 6 billion hours of video each month”, and believes that YouTube stars are not only a source of entertainment, but build “long lasting relationships with their fans”, giving brands a unique opportunity to connect with their target audience through their favorite video stars.

Seen anything else brilliant on social media this week? Share it with us in the comments.