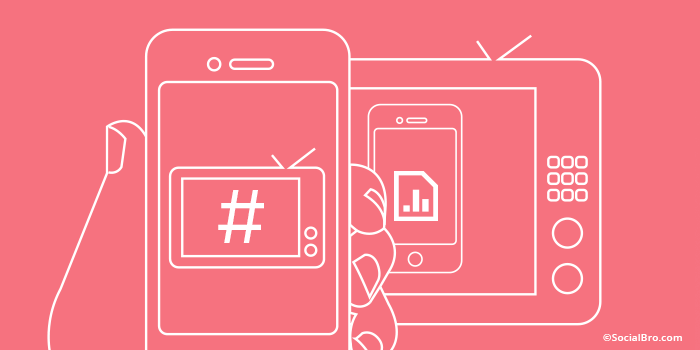 In 2015, the word ‘binge-watch’ was announced as the Collins dictionary’s word of the year. This should alert digital marketing teams to the importance of the second screen experience, especially as Twitter discovered that 70% of users share Tweets about TV shows they are watching and 11% say they cannot watch TV without Twitter. Whether it is traditional TV or streaming, mobile devices allow a social conversation with a Twitter audience that can extend the awareness of a show, and give viewers a richer experience.

As well as social marketers at brands, the TV channels themselves can also greatly benefit from an intelligent plan for Twitter activity around their shows. To give you a full picture, we’re looking how you can optimise your analysis of conversations of TV shows, both from the perspective of TV channels and brands looking to target the show’s viewers.

Number of Tweets, Tweets per minute, number of users participating in the conversation… all of this data is now available pretty much immediately to marketers with the right tools. It’s useful as a barometer of how much conversation a show is generating, and still has a place at the table when it comes to your data.

But beyond the quantitative information of the hashtag analysis and twitter trends analysis of the show, there are twitter audience insights to be gained from the data generated by the Twitter audience that have immense value. What other shows are they Tweeting about? What is the public perception of a program and its protagonists? What brands have a crossover with a show’s audience? You can even use cognitive computing to uncover the personality traits of people who are Tweeting about the show, or even individual characters and episodes. All of this information can be highly useful for brands who are considering marketing to the shows fans on social or via advertising slots.

The challenge with a large volume of Tweets is being able to instigate these qualitative listening actions, which cannot be reliably (or realistically) performed manually. The right monitoring tools can help take advantage of all this information and turn it into insights to make informed decisions. By tracking hashtags, keywords, profiles, and other aspects of the show, marketers can build an accurate large scale picture of the social audience of a show.

Before advertisers spend money on ad slots or sponsorship for shows, they want to ensure the show’s audience will be a true fit. Once an episode has aired, it’s worth capturing as much Twitter data as possible about those users so that the audience can be accurately researched. For example, a sports brand may be more tempted to advertise in a show’s slot if they find out they have a particularly large number of viewers who also follow sports teams, compared to another show which has less reliable information on how well they are connecting with this demographic

Another defining feature of Twitter is its immediacy. Social conversation will be at its most active during the show’s broadcast and a reactive approach will yield the best results. Content, topics, and other planned Tweets will be important, but an ability to respond to the audience’s reactions will help to elevate the social activity around the show. Therefore it is important to have a monitoring tool that provides marketers with live data and allows them to interact with operational information that can influence decision making.

Stay in the conversation and minds of consumers.

Your social activity shouldn’t end when the credits roll, and if broadcasters or advertisers want to truly reap the rewards of a solid Twitter strategy then they need to have an ‘off-air’ plan too. Campaign tracking on Twitter can help achieve the desired continuity in social conversation. You can select all users who participated in the conversation during the broadcast and segment them to create Tailored Audiences that you can advertise to with Promoted Tweets. Users who showed preference to one character may respond better to promoted content featuring that character.

Insights from Twitter data aren’t just useful for the marketing teams associated with the show, brands and media buyers looking to target TV audiences or advertise with the channel can benefit too. Knowledge of who shows are attracting will provide important data points that can be considered when looking at where to allocate twitter advertising budget. It will also mean that social campaigns can be made more precise if you are looking to target the viewers of a particular show. Using advanced analytical tools will allow marketers to know the individual Twitter users Tweeting about a show.

But how can you ensure that your social campaigns around a show perform as well as possible? Again the answer lies in the relevance and personalization of messages, creating different custom audiences based on the content. For example, a kitchen brand could execute a brand awareness campaign to users who have Tweeted the profile of well-known cookery or DIY shows. A piece of content such as ‘10 Steps To Getting The Perfect Kitchen’ could be used to drive relevant traffic to your site or to be sign up for more tips using Twitter cards.

In addition, analysing the crossover intersections of audiences can help brands to choose which show may be ideal for targeting. Which shows are their fans already fans of? What are their competitor’s followers Tweeting about? Which shows have an audience that they should be connecting with, but aren’t? This data can be ascertained, and will assist brands in building smart strategies for conquering the TV audience.

Do you think that the qualitative analysis of Twitter data is an untapped asset for chains and producers of television content? How else do you look to use the data offered by this social channel? We’d be interested to hear from you in the comment section below.

[VIDEO] Minute Masterclass: What should you look for when buying a marketing tool?