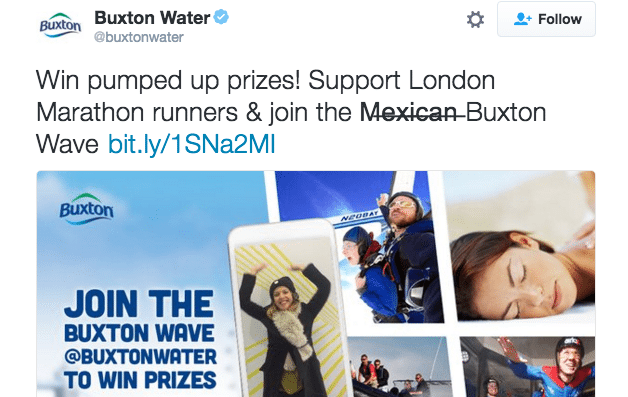 We’re having a rollercoaster of a week on Twitter and Instagram, and can’t wait to dive straight into this weekly round up to give you all the news. We have Buxton Water’s brand new campaign around the London Marathon this weekend. A host of brands Tweeted about the Queen’s 90th big bash and Earth Day. We also have an interesting Instagram campaign we wanted to share with you. This, and more Twitter trends to follow!

We thoroughly enjoy Buxton Water’s campaigns, especially the ones focussed on the London Marathon. In the past, they have changed the name of Canada Water tube station to Buxton Water, which was pretty ingenious of them.

They’re back this year, promoting the marathon’s #NaturalHeroes, and they’re getting all Twitter users involved. They’re asking everyone to Tweet them a video of a ‘Buxton’ Wave, presumably a version of the ‘Mexican Wave’ to win exciting prizes like skydiving and powerboating.

The UK’s reigning monarch turned a glorious 90 years old yesterday, 21st April and brands took the opportunity to wish in many different ways. Have a look:

Incidentally, a Burger King branch in London have changed their name to ‘Burger Queen’ to honour the #QueenAt90. Smart move!

We love a good Instagram campaign, and looks like Persol Sunglasses have nailed it. Recently, the glasses got a modern redesign and to support it, the optical brand has included a ‘choose your own adventure’ style graphic novel which is unfolding on Instagram. The social campaign is an extension of ‘Meet The New Generation’ campaign which stars Scott Eastwood.

The graphic novel proceeds as users ‘like’ each scene, putting them on the driver’s seat on how it should continue. The power of storytelling is definitely strong in this campaign.

We think everyday should be Earth Day, but we hardly have any sway on environmental matters. These brands, however, had interesting things to say!

- Twitter has great things in store for #Shakespeare400. Sir Patrick Stewart will officially launch a Shakespeare emoji on Saturday, 23rd April, to encourage Twitter and Periscope users to recite their own take on a Shakespeare passage with the hashtag #ShakespeareLives. Read about it here.

- In a similar vein, let’s not forget Cervantes, who has sadly been in The Bard’s shadow these 400 years. A fan ran a Twitter bot and published 17,000 Tweets worth of his famous work, Don Quixote, the last of which was tweeted today. It is in Spanish, but we think it’s still pretty cool!

Or maybe you’ll want to participate in this little #400Cervantes challenge instead.

Previous Story
← Why You Need Audiense Enterprise For Customer Intelligence
Next Story
TV & Social: 9 Talking Points From Our #SMBuzzChat →