Calvin Klein Get Racy With Sexting, Doritos Challenges The Lad Bible And The Best Of Brand Tweets Of The Week! 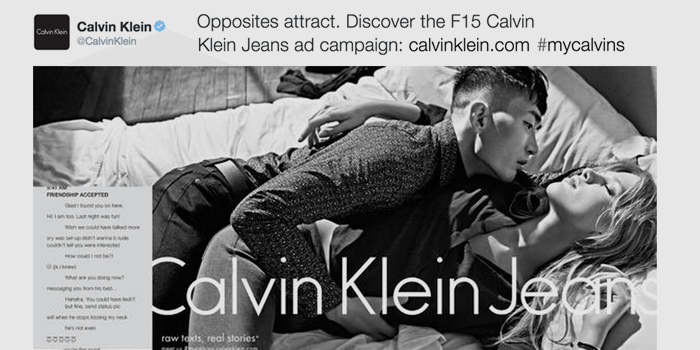 This week on social media, we had a range of exciting, alluring and inspiring campaigns. From Calvin Klein getting it on with the Tinder generation to Doritos and The Lad Bible teaming up for a quick vacation across seas. We also have the best of brand Tweets for hashtags #ILookLikeAnEnginner and #ALevelResults. Read on to see how these campaigns and Twitter trends are playing out on Twitter.

Calvin Klein’s been heating up Twittersphere! Its latest ad campaign introduces the F15 Calvin Klein Jeans and features racy language teamed with the hashtag #MyCalvins. The brand has released a series of print and video ads across the different social networks, including Twitter, showcasing couples in sultry poses overlaid with Tinder style sexting. The tagline reads “Raw Texts, real stories”, with the chats being inspired by real events.

In a bid to attract the digitally savvy generation, Calvin Klein has hit all the right notes. The brand is also partnering up with Tinder in the coming months. It will feature an in-app campaign giving users to swipe right or left.
https://twitter.com/CalvinKlein/status/626424329186754560

The #MyCalvins digital dating campaign is set to hit 27 markets, and will include LED screens in Bangkok and other cities. Will the outdoor campaign be more risqué than the digital ads? We’ll just have to wait and watch.

In a bizarre yet exciting marketing campaign, Doritos challenged the team at The Lad Bible, a content community for men aged 16-30 years, to take a 12-hour vacation sponsored wholly by Doritos. As part of the ‘Summer Bible’, and to encourage people to be more daring and make the most of summer, The Lad Bible team were asked to fly to Ibiza on Monday, complete a few rounds of different challenges and be back at their desks for 9 am the very next day.

Not one to miss out on the fun, the team at The Lad Bible Tweeted and Periscoped their way to Ibiza in a bid to inspire their audience to make the most of the summer season. What followed was a hilarious and completely wacky 12-hour vacation.

See the whole journey here, at your own risk:

Twitter was awash with tears as the cast and crew of British drama, Downtown Abbey wrapped up the filming of their final episodes. They documented the final days of production and shared with fans using the hashtag #LastDaysOfDowntown.

Here are some of our favourites:

Major brands jumped on the hashtag #ILookLikeAnEngineer to shatter gender stereotypes about women in various engineering fields. Some inspiring, some bold, here’s hoping sexism goes out of the window in professional fields all around the world.

The A levels result were announced yesterday and there were congratulatory messages floating across Twitter by students, parents, celebrities and even brands. We rounded a few funny ones!

- Twitter have lifted the 140 DM character limit, and increased it to 1000 characters. The change is currently being rolled out to all Twitter users. Have a read here, and see why it’s great news!

- Singapore celebrated its 50th Anniversary last weekend, and Lego did its bit by asking kids to redesign the city for year 2065. We love a bit of Lego city scapes. Have a look here.

Previous Story
← Twitter Advertising Targeting: How Relevant Are Your Ads?
Next Story
The Three Big Benefits Of Advertising On Twitter →