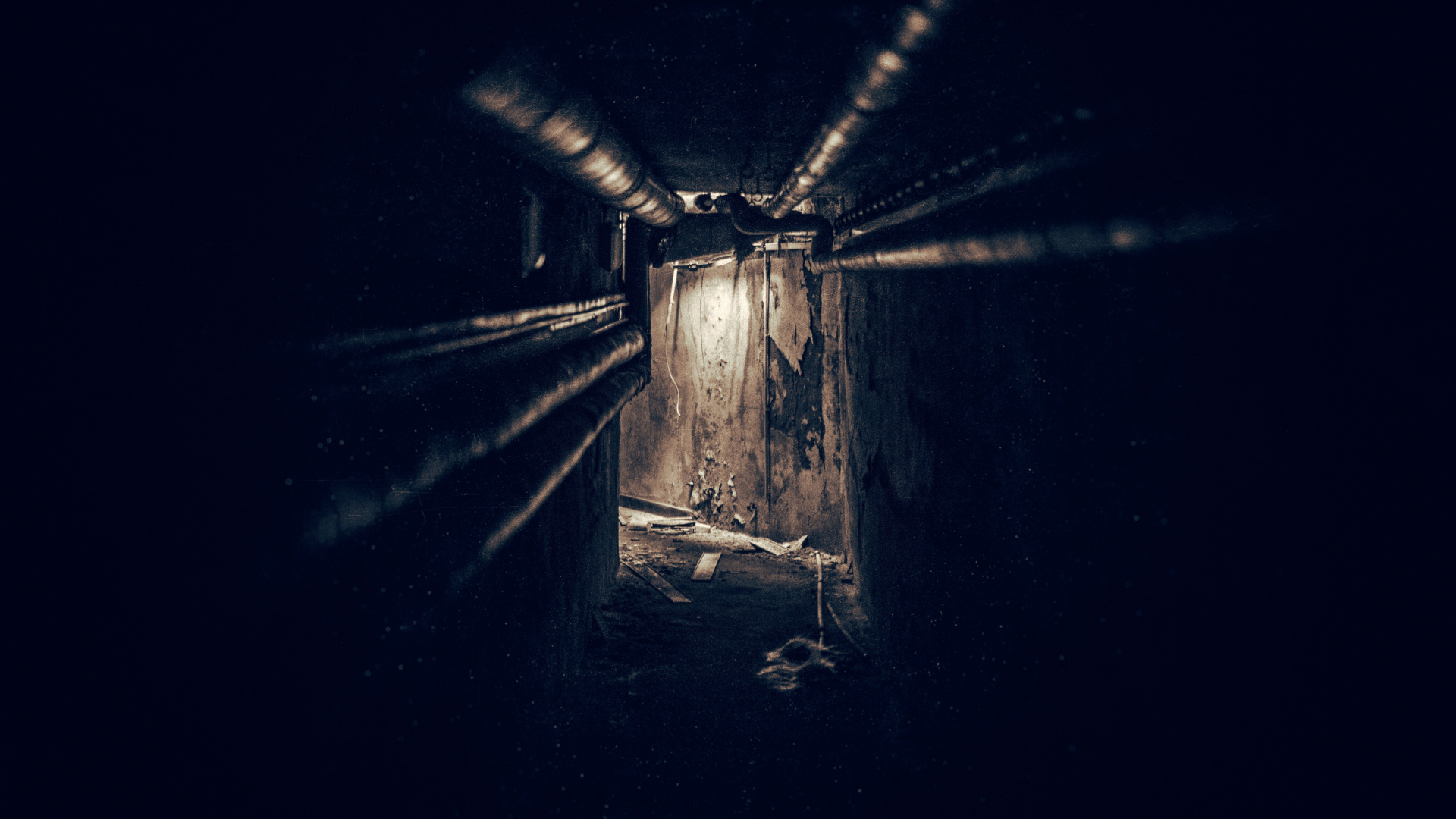 How to prevent intruders from sneaking into your campaigns

One of the most frequent problems of our clients when it comes to creating audiences is that in the audience validation phase they find certain groups or segments that are not relevant to their campaign and do not fit with their target audience. Building precise audiences is key to maximizing the return on any strategy, so being able to identify the fake members of that audience is essential to achieve the maximum ROI of each campaign.

In this post we want to show you how to identify and eliminate the most common cases of "intruders" within an audience: users that generate noise in conversations (hijacking of hashtags), bots, prize-hunters, etc. Within the different phases of a campaign, the validation of the audiences is key within the preliminary stages for the subsequent success of the campaign. Today we are going to share with you how real analysis experiences have been made by different members of our team that describe some of the most common situations.

When you are creating an audience that will be the target audience of your next campaign, or you simply want to know more about the community of a particular brand, person or industry, identifying potential fake followers is one of the first steps that must be taken (audiences validation).

In this example, our CEO Javier Burón (a great fan of the UFC) analyzed, a few months ago, the One Championship audience to see what impact it could have on the UFC. In a first approximation to the Audience Intelligence report that he generated using Audiense Insights, he was struck by the fact that there was a large segment (approximately 20% of the total audience) that was very international and (attention!) had nothing in common with MMA beyond being One Championship fans. 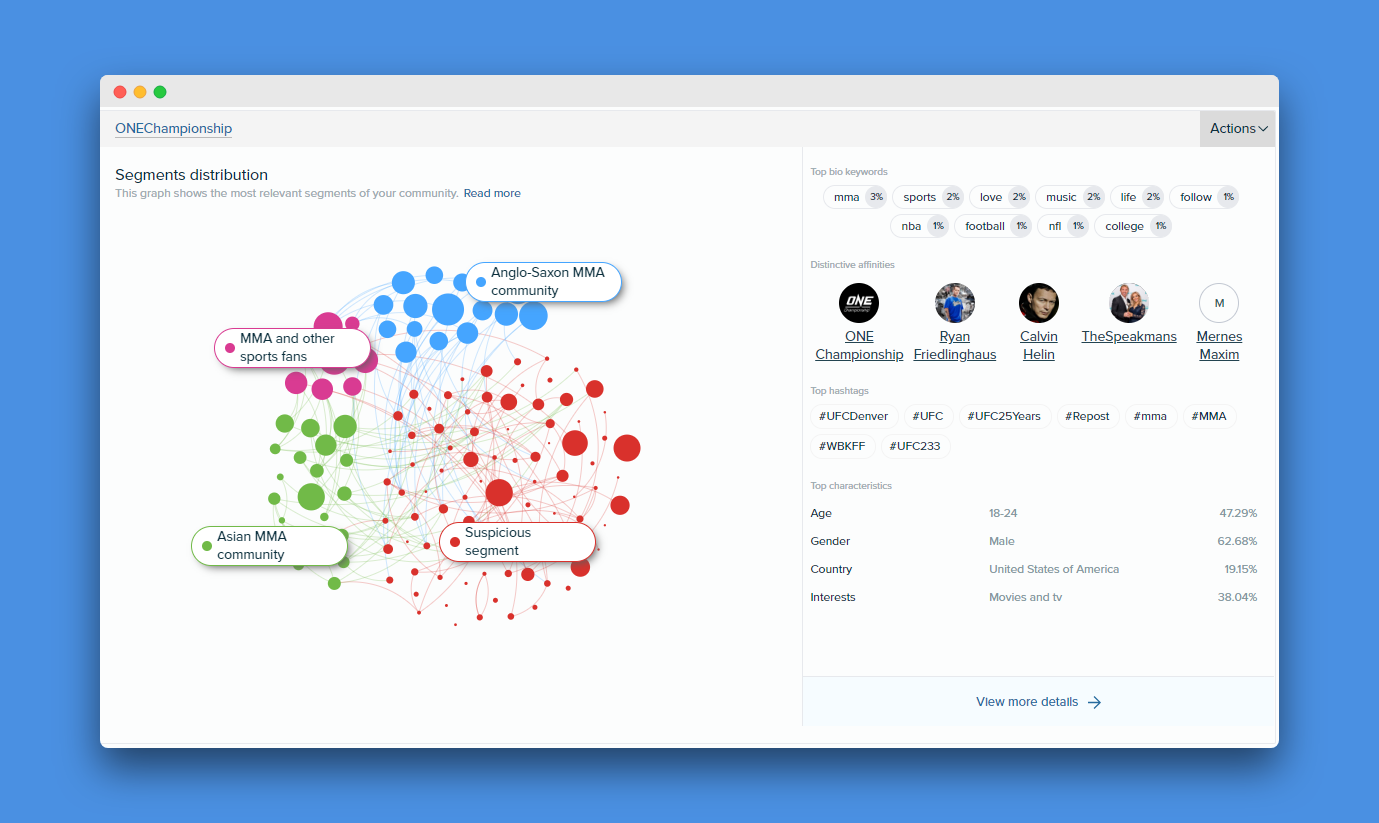 This made him suspect that probably the rest of affinities of this segment have also bought those followers (the ones in that suspicious segment) or that “somehow” they have attracted this same community in the past. 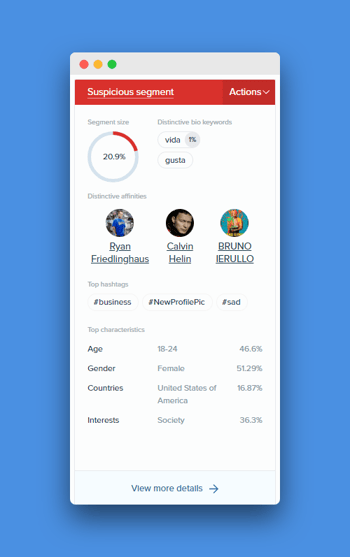 So Javier eliminated this segment in the target audience of his analysis and continued with it, now bringing to light (with the audience "clean") new relevant segments that were really interesting for the purpose he pursued.

If you are interested in the full report on the One Championship audience, you can view it here.

The prize-hunters, the users that participate in all the contests

Sometimes, the segments that have nothing to do with the audience that is the object of your analysis turn out to be prize-hunters: profiles created exclusively for the purpose of participating in contests and draws created by the brands.

One of those situations was lived by Alfredo Artiles, our CTO, who likes to lead a healthy life, practice sports and eat "Real Food". Alfredo explains that "my goal for the report was to reveal something I did not know about the realfooders in Spain" so he created an audience based on the analysis of the social listening of conversations around realfood (publications that include the following keywords: #comidareal, #realfood, #realfooder, #dietapaleo, #paleo) and the audience obtained was filtered by location: Spain.

In this case, the clue was also given based on the influencers of the segment under suspicion. The brands that segment had more affinity with were mostly ultra-processed products brands, and this is a circumstance completely contrary to an audience that is supposed to be 'health' conscious. 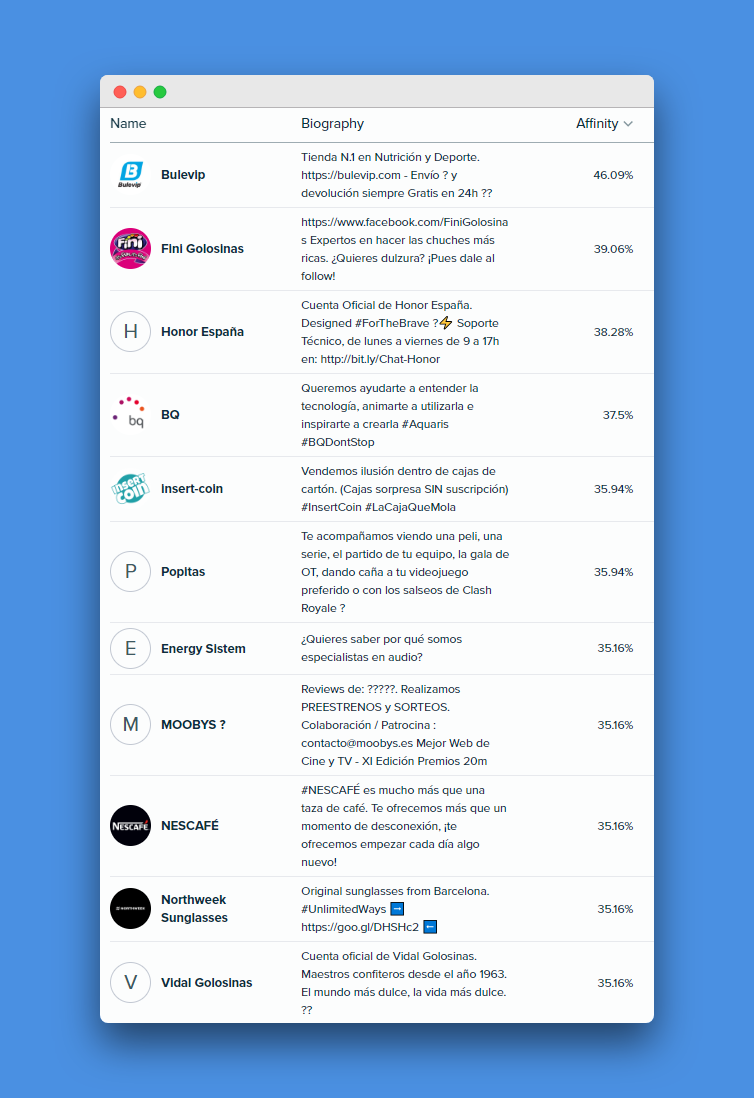 So this led him to qualitatively analyze the profiles that make up this segment and he could see that these profiles are dedicated to RTing all kind of contests, which also included some contests of healthy product brands that contained some of the monitored terms and that motivated the identification of these profiles as part of the audience.

If you want to see the full report about the Real Fooder audience in Spain you can view it here.

Another situation, in which you find unwanted users in the audience you have built, is when performing social listening using a particular hashtag or keyword and the conversation "hijackers" appear: these are profiles that use the high visibility that a certain topic is having (the conversation you are analyzing) and try to take advantage of the wave to give visibility to their own publications, which usually have nothing relevant to add to the actual conversation.

This happened to our colleague Roisin McNamara as she analysed the conversation around a hashtag related to a series of events. Roisin wanted to identify and analyze the audience who talked about that epecific topic to target them in future campaigns. This audience was defined by a simple analysis of the conversation around the hashtag in question. As she explains "As many of you reading this will know the hashtag is used globally throughout social media and heavily by the people attending to these eventos to document and highlight those meet-ups and conferences. Having said this, like most keywords/hashtags they are never exclusive to one conversation. While we found the hashtag was predominately these people owned hashtag, it’s not exclusively the case. This is where with the use of sophisticated segmentation, we were able to refine our analysis of this audience and remove whole segments that weren’t relevant for us to target or understand.” 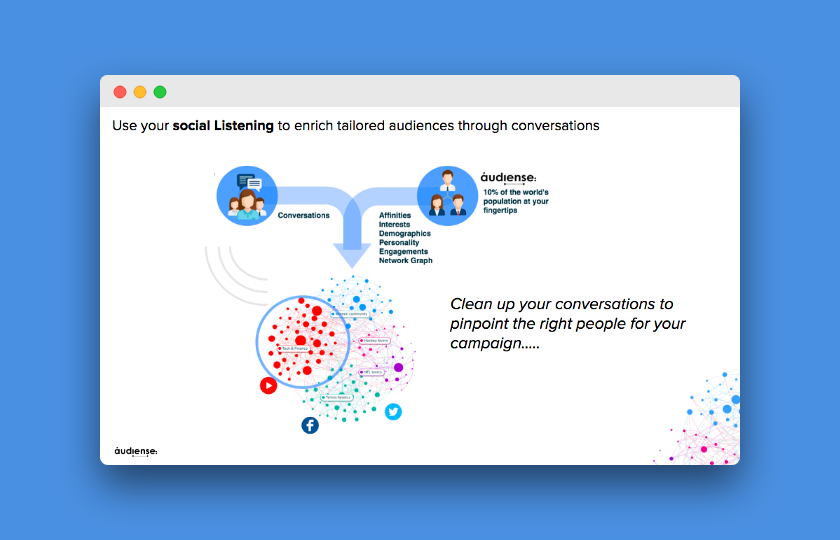 If you also want to declutter your audiences and prevent unwanted users from being part of your target audiences, give Audiense Insights a try. Request a Demo and our team will be happy to show you how to do it!

Photo by Denny Müller on Unsplash.

How to Create Video Ads Based on the Consumer Insights