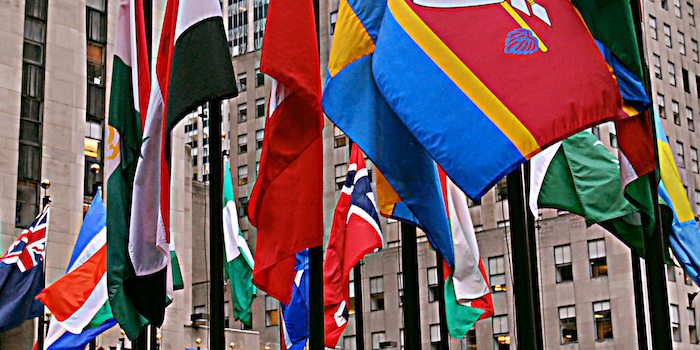 A single link tweeted by the President of the USA generates an average of 84,000 clicks, and a controversial remark might power news cycles for days. But there’s more to governmental social media than Donald Trump, and Burson-Marsteller’s Twiplomacy reports uncover in-depth details in how the globe’s governments, diplomats, and leaders are using social media all across the globe.

We spoke exclusively to Burson-Marsteller’s Matthias Lüfkens, founder of Twiplomacy, to find out more about how world leaders are using Twitter, how their direct messaging communications strategies far outperform email, and why not having a huge following isn’t necessarily a bad thing for a diplomatic office. 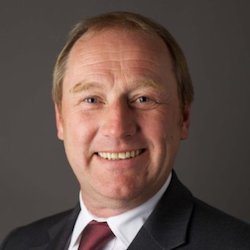 Matthias Lüfkens, Twiplomacy
Audiense: What led to you conducting the Twiplomacy study?

Lüfkens: At the 2008 World Economic Forum, I saw that we had participants using Twitter to share their thoughts and findings with other attendees, and the wider world. I became fascinated with the speed, brevity and effectiveness of this communication tool. When I came to Burson-Marsteller I thought we should study how governments and world leaders use Twitter, and Twiplomacy was born. Now in its sixth year, we’ve opened up the study to monitor their usage on Instagram, Facebook, Snapchat, and others too.

What’s the social strategy for the Twiplomacy account itself?

We exclusively Tweet about the use of social media by world leaders, governments, embassies, diplomats and international organisations; in a broader sense we are looking to engage everyone in the space of diplomacy. We currently have over 50,000 followers across our English, Spanish and French Twitter accounts, but I’m not too fussed about the number. Our following is small compared to other accounts in our space, but we’ve worked hard to amass a higher quality of followers.

For example, I have a private list comprising 208 heads of state and foreign ministers who follow us, as well as many relevant journalists which cover our area. This is important, as our primary goal is to share our findings with these key audiences of government officials that we provide guidance to, and relevant journalists for PR purposes.

How do you ensure this audience is connecting with the content you’re producing?

I use Audiense to send them Direct Messages (DMs) when our new studies come out, and offer journalists embargoed details from which to build stories. Overall, our DMs get a 25% response rate; this is a much higher rate than a press release, and it gets straight to their government’s social team (sometimes the leaders themselves reply too). Going via DM is far more effective than an email to a general government address. This immediate, personal approach is why I find DMs to be the most powerful communications tool that there is.

What was it about Audiense that first solved a problem for you?

It was the DM capabilities that first caught my eye. We had so many people following us that I wanted to communicate with, but it would be far too time-consuming to reach out to them all manually. To be honest, larger scale targeted ‘DM-ing’ was something we were unsure about at first, but people have taken to it and the response has been overwhelmingly positive, so we’ve been using it ever since.

What led to you using Audiense with the Twiplomacy studies?

Many heads of state and foreign ministers use Twitter so, to ensure we have a clear picture of their activity and when we’re connecting with them, we’ve built lists of all of them. These lists are now plugged into Audiense for list management, analysis, and DM campaigns. We now have almost 180 public lists on the Twiplomacy account, and a further 18 private lists. The private lists include journalists, ambassadors, and diplomats following our accounts.

Why is this helpful to you?

One of our lists includes 400 ambassadors who follow us, another is a list of 4000 diplomatic missions, of which 1126 follow us. Finding all of these users, building the list, and messaging them all is simply too much to do manually. Curating this list in Audiense and using the DM capabilities to communicate relevant messages with them all saves us an incredible amount of time.

What do you recommend other brands and organisations think about when conducting a similar strategy?

I advise many key organisations based in Geneva, and I tell them they already have their most important connections on speed dial: you just need to segment and reach out to them via DM. I'm pretty sure that it's the best way to attract attention to a single tweet, and most people we contact are thankful when we highlight something important.

The first step is to segment your followers. If an account has millions of followers, as have many of the ones I speak to, it's an easy argument. You can tailor your communication to fit audiences, see how you’re performing across different segments, and conduct your activities far more efficiently. With large accounts, setting up the segmentation can take a little time at first. But once it's set up and you can connect with the different groups, the benefits greatly outweigh that initial effort.

How important is Twitter for world leaders and governments?

In 2016 we identified 793 Twitter accounts belonging to heads of state and government in 173 countries, representing 90 percent of all UN member states, with a combined audience of 324 million followers. This makes it the social platform of choice for governments and foreign ministries. 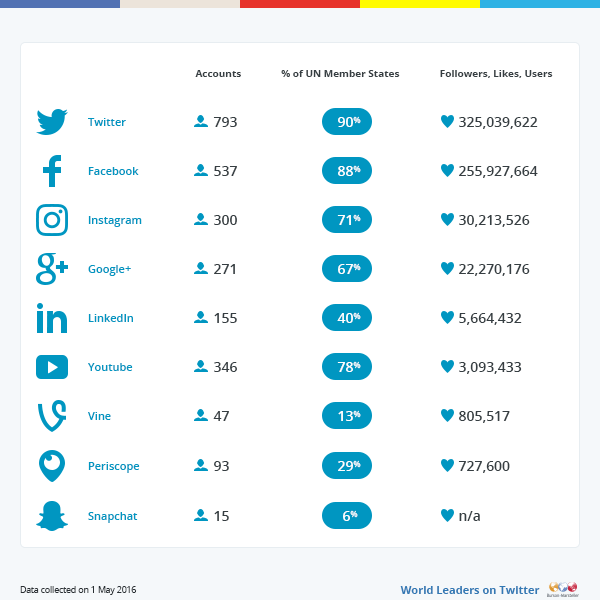 Twitter is the world's digital diplomacy news wire; it’s the most efficient way to broadcast one line statements with links and videos. Look at the effectiveness of US President Donald Trump: whatever you think of him, he's used Twitter for a long time, and journalists and citizens across the world pay attention to his tweets.

The growth of users is not the same as other networks, but it's big for influencers and is the largest open source of your citizens’ conversation. If you want to know what's happening in the world and understand it, it's vital to have a finger on the pulse of Twitter.

What do you think Donald Trump’s frequent use of Twitter?

I'm a big fan of personal engagements by leaders on Twitter, but I think it has to be responsible. It's great when leaders do Q&As or post as themselves, but I don't think they always need to do that. Trump's style is unusual as it’s very frequent and a lot seems to be by himself.

What's the main thing governments and organisations struggle with on Twitter?

It's the storytelling; they’re struggling to write interesting tweets. To put it frankly, too many government accounts are boring. They treat their Twitter feed like a news feed, but forget an important maxim that news must be engaging. Think of a news headline, it has to be enticing or you won’t read the rest of the article. The same philosophy applies to tweets, if it's nicely written and sparks intrigue, you'll watch a video or click a link to read more. It sounds simple, but if you capture their imagination, your people will be curious to see the hard work you’re doing.

They also need to get to a point where every single tweet should have a picture or a native video attached, because that would drive the engagement. Even in direct messages, you can now include multimedia at scale in your DM campaigns, so there’s no excuse for governments not to make their communications visually pleasing.

I think, lastly, that governments need to open up a little on social media. Opportunities for citizens to drive that dialogue between the people and their government is often absent. Institutionalising a Twitter Q&A like you would with a weekly press conference is important.

What was the most unexpected finding in the Twiplomacy study?

Different governments use social media differently, so there’s a lot of things you can compare. We look at several indicators for the study to try build a clear picture of how social is being used, such as their following, their activity etc. I'm interested in who is the best connected, which means discovering who follows who. The reason being that once you're mutually connected, you can do private diplomacy.

In that respect, the European External Action Service is the best connected diplomatic account. Out of 800 world leaders, they have mutual connections with 137 of them. Second is the Russian foreign ministry, followed by the German and British foreign offices. Somewhat surprisingly, the next best connected ones are Norway and Israel. Lithuania, Iceland, and the Dutch are all in the top-10 too. What this tells us is that you don't need a massive account if you have a well-connected small one. Smaller countries can really use these connections to have a seat at the table with bigger countries.

We also looked at how conversational world leaders were. Do they reply to their people? It’s something we encourage if there’s time to do it. We noticed that the African leaders, especially the Rwandan president Paul Kagame, really use Twitter as a tool to directly connect with their constituents, answering questions from followers.

How has the Twiplomacy study affected your social strategies going forward?

The study has helped us optimise our own Twitter strategy, allowing us to advise clients on the best strategy. We’ve found a lot of small things that make a big difference over time, like standing out in a Twitter search by putting emojis and hashtags in your bio. The study keeps us up to date with what's working for accounts associated with governance and diplomacy, ensuring us and our clients to walk the walk. Smart, organised tactics around our use of DMs is also a big part of that.

How do you see social media evolving for world leaders and organisations in the coming years?

I see them becoming live in some way pretty much all the time. For example, take the Argentinian president, Mauricio Macri. His team has a social editor with him all the time, chronicling his daily activities in full, using Snapchat and Instagram Stories. The best clips will then be posted on Facebook, Twitter, and other pages. This is the direction we're going.

Obama had an official photographer with him all the time, Pete Souza, who took over 20,000 photos a week, and this is the next step. Not that they’ll post 20,000 times a week, but that person will constantly feed the leader’s actions to social, and quite often go live. The biggest challenge will be making it curated and manageable for people who wish to follow everything but aren’t able to check their social feeds constantly.

If you want to do it well, you have to be by leader's side all the time.

To get a better idea of how you should be using DMs alongside your marketing strategy, download our free eBook on them, or contact MoreInfo@audiense.com to start a conversation with us about what we offer. If you’d like to hear more on what the world’s top marketing professionals are doing, check out our case studies, or our social media interviews.

Previous Story
← [VIDEO] Minute Masterclass: How does social data power a campaign?
Next Story
You Talk, We Listen: The New Audiense Navigation Rolls Out Today →

The digital marketing trends & ideas to take into 2017, and beyond