Manchester United Release Their New Kit, Kleenex Is Looking For A #HayFeverHero And The Best of #TubeStrike On Twitter! 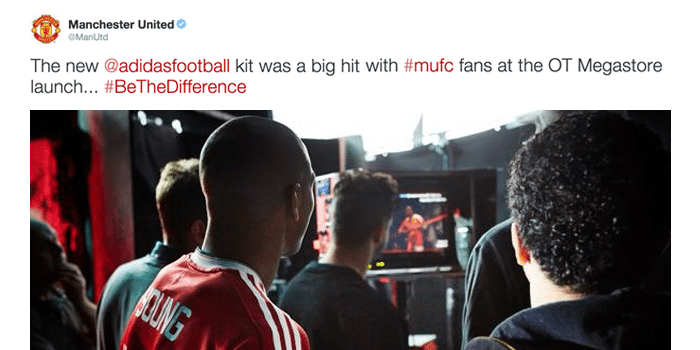 A fresh new month, a fresh new week and a whole lot of interesting campaigns and brand interactions on Twitter! Read up on all the Twitter Trends below, from Manchester United’s new football kit by Adidas, to Kleenex helping hay fever sufferers in the UK and the best Tweets for London’s dreaded tube strike and Rio 2016.

After its release Manchester United’s new Adidas Football kit has generated $2.6 million in social media value for the brand in just three days. The new 2015/16 kit was launched with the hashtag #BeTheDifference, and has generated the same value in three days as Real Madrid’s campaign has since its launch in June.

The campaign kicked off with a video featuring current players, including Ashley Young and Wayne Rooney.

Have a look at the engagement Man U and Adidas Football’s Tweets received on Twitter:

The summer months are dreadful for hay fever sufferers everywhere, and tissue brand, Kleenex saw this as an opportunity to help out those in need. The brand teamed up with social media agency, We Are Social, to produce the summer long campaign on Twitter. Seeing hay fever sufferers expressing their anguish on Twitter, Kleenex spent time monitoring emotions related to the allergic condition. They then reached out to those users and crowned them #HayFeverHero.

The campaign doesn’t stop there. Kleenex made sure that their Hayfever Heroes received a Kleenex goodie bag, complete with, yes, you guessed it - a box of Kleenex Sensitive tissues and a Certificate of Hayfever Heroism. Generating lots of social buzz and engagement from their heroes.

The #HayFeverHero campaign will run all through August, so if any of you out there have a severe bout of hay fever, you know who to Tweet for support!

Another tube strike in London, another set of cheeky, funny and helpful brand Tweets. Here’s a list of the ones we liked best!

Only #1YearToGo for the Rio 2016 Olympic games! Where did the time fly? Brands and sports teams across the world took to Twitter to remind us all that Rio 2016 is almost here, and it’s time for a countdown. Here’s a roundup of the best Tweets.

- Katy Perry launched her new fragrance, Mad Potion, at the first ever social pop-up store. The @KatyPerryPopUp was almost like a physical store, and had Twitter’s new ‘buy now’ button to let her ardent fans (Katy Kats) purchase the perfume before it was launched in the non-virtual world. Read more here.

- To say goodbye to Jon Stewart from The Daily Show, Arby’s took the opportunity to put together a video of all the times the TV host had made fun of them on The Daily Show. A self-deprecating move for sure, but nonetheless made for one funny viewing. Watch it here.