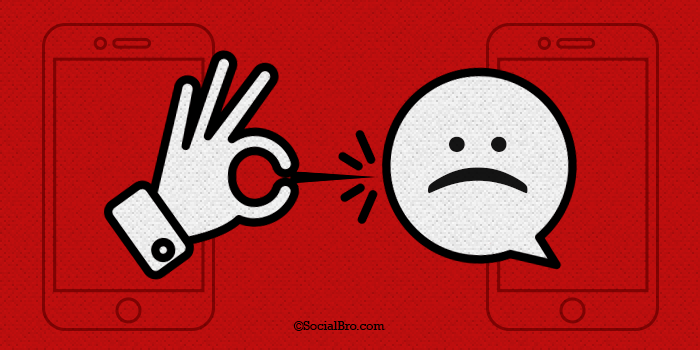 Should you be scared? Of course not, you’re a 21st century marketer who is willing to tackle negative feedback head-on. This is your time to shine, turn those cold and nasties into warm and fuzzies. Need a little inspiration? Here’s 7 tactics you can employ to push out the jive and bring in the love:

Hold on, don’t start penning a witty counter or grovelling apology until you’ve had a think about what sort of negative post it is. This information should help to carve your response. Are they stuck with something, either through the fault of themselves or your product? Is it a justified complaint? Is it someone trying to offer constructive criticism? Is it someone who is just being a troll? If you can’t tell just by looking at the comment then sometimes checking their profile and timeline will give you clues as to what kind of person (and negativity) you’re dealing with.

We all mess up. The more human and sorry you seem, the more likely people are to believe it. Do it quickly, mean it, and outline what you’re going to do about it. Getting this right can be the difference between you being a big, bad business or a cool, caring company.

2. Use It As An Opportunity For Improvement

You know what’s useless? A three-star review. Someone who says you are “great” but not a lot else either has no overwhelming opinion on your product or they’re trying to avoid hurting your feelings. If you want to improve then feedback like that is asking you to guess what people want. Someone with constructive criticism is actually doing the work for you and showing you where you can improve. Thank them for pointing out the issue, ask them what they think would be better, and be sure you give them an idea on when the issue will be resolved.

3. Go The Extra Mile To Make It Better

This approach shows that you’re willing to go over the top to please your customers. This offers an excellent PR opportunity, and puts you in position to come out as major good guys. Tweeting a (justifiably) disgruntled customer and offering them a year’s supply of your product is worth far less than it would cost for all the free advertising and congratulatory press you could potentially get. You don’t even need to give something away. Sainsburys simply changed the name of their product after a letter from a three year old and felt a wave of public warmth on social media as a result.

Are you finding that a problem or complaint is continually arising? It’s all well and good apologizing or saying you’re working hard to fix the problem, but what about showing what you’ve done? For a start, you could blog about all the wonderful things you’ve done to make the situation better. Perhaps you’ve installed something new to deal with the problem?

Maybe a customer has publicly had a bad experience. Remember that extra mile we talked about a second ago? Put that into action and capitalize on it! Post up a picture of them receiving an ultra-deluxe free version of your product as an apology, delivered by The Rock, while on their complimentary trip to Disneyland… That might be a bit much.

5. Fire Back With Humour

The customer is always right, unless they’re acting like a total moron in the eyes of the rest of your audience. If there’s no assistance you can give, and you’re certain that this person and their opinion is not representative of your audience’s perception of you then you can always stick up for yourself in a light-hearted manner.

In 2012, Bodyform received this complaint on their Facebook page. It lamented how tampon adverts always presented an idyllic lifestyle of exciting events and fun times, rather than the less pleasant experience it tends to offer in real life. Poor little man, his world had been shattered but his post was racking up likes. Instead of taking it lying down, Bodyform responded with a well-produced sarcastic apology that generated over five million views and received an overwhelmingly positive response.

Unlike responding with humour or other big public gestures, this one might not get you a major viral WIN. However, it also means you won’t get a massive viral FAIL from publicly dragging out a heated exchange. If the problem isn’t immediately solvable in 140 characters then shifting the conversation over to DMs or emails means your dirty laundry isn’t aired in public. You can also have a more detailed exchange through these channels, hopefully getting a better resolution to the matter.

7. Check Back With Them

If you’ve sorted the issue, don’t forget to pop over a tweet to check in with them a few days later to make sure everything is still good. This shows them that you care about them as a long-term customer, but also publicly shows that you haven’t left them hanging.

You should now be an expert at deflecting sparks of negativity into thunderbolts of awesome goodness! If you have any further tips then we’d love to hear from you.

Previous Story
← What Are Verified Accounts on Twitter?
Next Story
Foolproof Ways To Gain 1000s Of Twitter Followers →