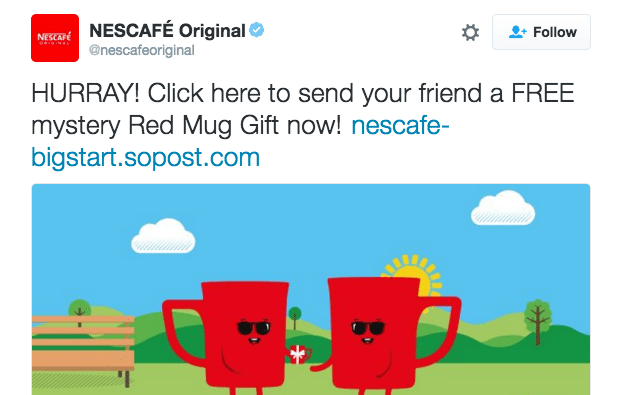 What’s better than sending gifts, getting real-time score alerts in your Twitter inbox and an opportunity to have a quick look into the newest video game? That’s your Friday made! This week, we have Nescafé sending gifts to whoever you want, Southampton FC teaming up with Twitter UK and Xbox UK promoting the brand new Quantum Break in one of the best ways possible. Plus, more Twitter trends to take note of.

Nescafé let out its big reveal for #BigStart, their newest campaign, this week. After launching their TV ad, the coffee brand Tweeted saying that they have something exciting coming up to give a friend a #BigStart.

And a few days ago, Nescafé Original revealed that a Twitter user could send any friend a free ‘mystery’ mug via Twitter. Just click on the link, add your friend’s Twitter username or email and they’ll receive a message with instructions on how to collect the mug. Nescafé partnered with SoPost, a website that lets brands send out samples of their products online.

New age of Twitter marketing and advertising? We think so! What are you waiting for? Send that lucky friend a mystery mug and give them a #BigStart to their weekend.

Yes, you read that right. Southampton FC has teamed up with Twitter UK to bring live scores to their fans’ Twitter inboxes.

An interesting move, #Saints is the first club in England to launch this service. They will work alongside Twitter to deliver key updates to fans from all their Premier League Games. Fans simply have to sign up to receive Direct Messages from #SaintsFC’s Twitter page and they can be assured that they’ll only receive updates on the moments that matter.
https://twitter.com/SouthamptonFC/status/717666832442867712

Having already exclusively heard from the club about their #ShowYourStripes campaign, this is another smart social move from Southampton FC. Will there be other clubs to follow? We think so.

Xbox UK have made the best use of Twitter’s Conversational Ads yet. As a way to promote Quantum Break on Xbox, the console brand decided to give Twitter users a taste of the game. They are letting Twitter users choose different scenarios of the game for a special demo.

Have you played it yet?

- Star Wars released their new teaser trailer for Rogue One: A Star Wars Story on Good Morning America. And unsurprisingly, Twitter made the loudest noise with 13K retweets.