...And Nothing But The Truth: 8 Ways To Build A Trustworthy Brand On Twitter 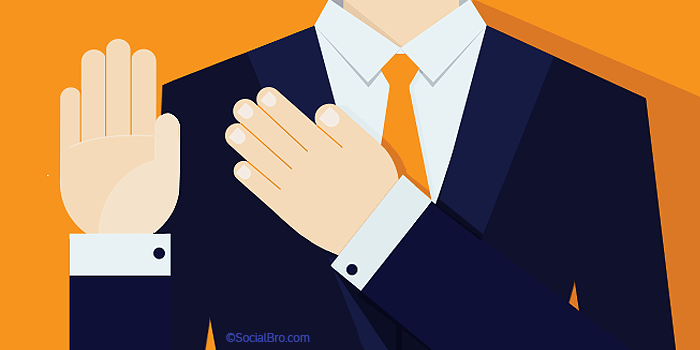 Listen up marketing professionals, your customers are cynical. The last campaign you did: so well-crafted, beautiful, and SO well-received… or was it? Less than 50% of consumers trust ads on the TV, the radio, or in the newspapers they read. Time to get real.

Social networks, like Twitter, have given people a stronger voice. The customer is king, and they’re not afraid to use their voice on social networks if they don’t believe your brand is genuine. Don’t believe us? British companies alone are losing almost £50,000 a year because of negative comments online. To ignore the impact of social media credibility is to put your brand’s financial stability at risk. Brand reputation on Twitter is an issue you need to address and take control of, right now. But how? Here are 8 strategies for building a trustworthy brand on Twitter.

[Tweet "“Trust is the most important thing we can do in everything we want to sell or offer.” - @AriannaHuff"]

Is there a problem with your service? Keep people updated, pause the promotional Tweets until the problem is sorted. Facing a social media crisis? Try and be as honest as possible without further damaging your brand. By showing that you’re aware of the problem and how you’re trying to sort it out, you look far more engaged with your customers’ needs than if you had kept them in the dark.

[Tweet "Nobody has ever criticized a brand for being polite, honest and transparent with their customers."]

What you definitely shouldn’t do, is create fake accounts to show support for your cause because you can look catastrophically silly when someone notices. This is an excerpt of a post on Chick-Fil-A’s wall, when Jim Henson claimed it had pulled its Kids’ Meal toys from a promotional campaign with them in the wake of homophobic comments made by bosses of the fast food chain. Chick-Fil-A said it had actually removed the toys over safety concerns, and people were debating the veracity of the claims. One user posted a series of replies defending the restaurant, only for her to be outed as a fake profile who was using a stock image. BUSTED, although Chick-Fil-A has denied involvement with the profile. Whatever the truth, it highlights how much people value not being hoodwinked by a company. 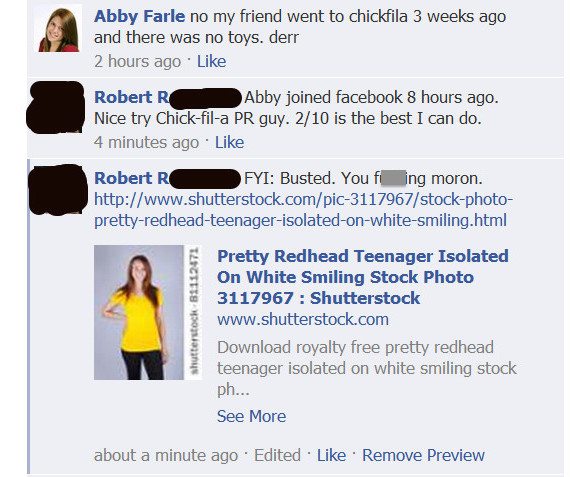 One of the quickest ways to lose trust in the credibility of your brand is for someone to notice that your followers have spiked suddenly with no clear reason, that all the accounts following you look like bots, or that you have very little genuine interactions despite your high follow count. In other words, if it looks like your followers have probably been paid for. Fake followers account for precisely 0% of your sales, they don’t recommend you to friends, and they don’t provide any ROI. The more time and money you waste on them the less you’re spending on attracting those highly sought-after real ones, who have a habit of paying for stuff when they desire it.

[Tweet "Don’t buy followers, get meaningful ones who are interested in your product and are definitely human."]

Buying followers makes you look like a shady brand who can’t attract real ones. If you’re lying about your followers, why would we believe anything you say about people using your product? If someone notices this it can kill their perception of your brand, and put them off investing in you. In the 2012 US election it was revealed that Mitt Romney (or someone trying to sabotage him) had seemingly paid for over 100,000 new followers. We all know how that turned out for him.

Become a thought leader in your industry by producing and sharing your own thought-provoking, useful content. Not only does this show that you have more to say on your area of expertise than 140 characters, but you’ll find people will come to your brand as a source of information on a related topic. A well-researched white paper, eBook or blog post proves you can collect and analyze data, develop ideas, provide opinions and insight. An engaging and insightful blog suggests you can make complex issues simple to understand, due to a deep knowledge on the matter. People coming to you as a fountain of knowledge will increase your brand credibility and show you have something to offer.

We’re always happy when the warm and fuzzies come rolling in. But don’t just feel smug, show appreciation for whoever has decided to spend their online time singing your praises. This will encourage them to do similar in the future. The benefits of building trust with these people are huge as 92% of people trust the suggestions of people they know. This doesn’t just spread happy vibes about your company, it can have a positive impact on your sales. 50% of shoppers have decided to buy something based on a recommendation on social media, so the people choosing to spread the love about your brand are highly valuable in your quest for trustworthiness.

[Tweet "Positive comments from consumers online are trusted by 70% of people, even if they are strangers!"]

With 33% of people discovering brands through social media, your Twitter profile is going to be one of the first things people will see. One of the best ways to build brand credibility and trust on Twitter is also one of the simplest - don’t be an egg. Toss out that default egg avatar, personalize your profile, and make sure people know you’re a real person alive and kicking behind that Twitter profile. A visual presence on Twitter, with a distinctive avatar picture (whether it’s a picture of your logo or your product), will make your brand message stronger as users will be able to recall your Tweets.

[Tweet "A visual presence and a steady stream of chirping is important to build trust in your brand on Twitter."]

With all that being said, you still have to make sure you’re using images legally. Make sure that the images you use are your own, are used with permission of the photographer, or are ones you have the rights to use. Encouraging responsible image sharing shows that your staff have been trained in copyright, it shows professionalism and you also won’t find yourself falling foul of the law. It gives customers confidence that you’re a reliable company who knows what they’re doing.

[Tweet "Just because a picture is on the Internet doesn’t mean copyright laws don’t apply to it."]

A recent example where this went badly was when the band Red Jumpsuit Apparatus cropped and altered a professionally taken picture from one of their live shows before putting it up on their Facebook page without credit or permission. What followed was an ugly, drawn-out spat with the photographer that attracted major criticism. It ended with them having to remove the image, pay the photographer, and make a groveling (very un-Rock N’ Roll) apology. They received no sympathy, damaged their reputation, and were out of pocket.

7. Be Part Of Your Community, Online and Offline.

Community spirit never goes amiss on Twitter. After all, it’s an online community of people engaging with things they’re interested in. If you want people to have positive perceptions of your brand, you need to give something back and show you’re not just about flogging your products on social media. Get involved with a Twitter chat to share some of your industry knowledge to establish your brand as a credible thought leader. Even small acts of kindness, like getting involved with local or industry initiatives (and posting about it on Twitter, of course), can really help build trust in your brand. This is crucial if you’re trying to woo the Millennial market, as 82% claim they have more faith in a company if they have a social media account and are actively using it.

[Tweet "What goes around comes around, spread a little love on Twitter today and reap the rewards tomorrow."]

8. Be Genuine With Your Customer Service

People are to see not just your Tweets, but mentions that people have made about you. If they see a string of upset customers who you haven’t responded to then that does little to fill them with confidence about you. In fact, if your brand isn’t an established one it may even look like you’re running some sort of scam if you don’t address these concerns. By handling these complaints with efficiency and empathy you’re demonstrating that there are real humans behind your account who are dedicated to giving their customers the best care possible. If you’re Twitter feed is heavily inundated with customer queries then setting up a dedicated customer service account may be useful. This shows you’re aware of how your customers are using the service, and that you’re here to serve them and be held accountable to them.

With a Twitter profile that makes you appear as trustworthy as possible, you’re ensuring that people are much more likely to stay loyal to your brand than if you neglected it. We’d love to hear more suggestions for how your Twitter profile can be used to generate more trust for your brand.