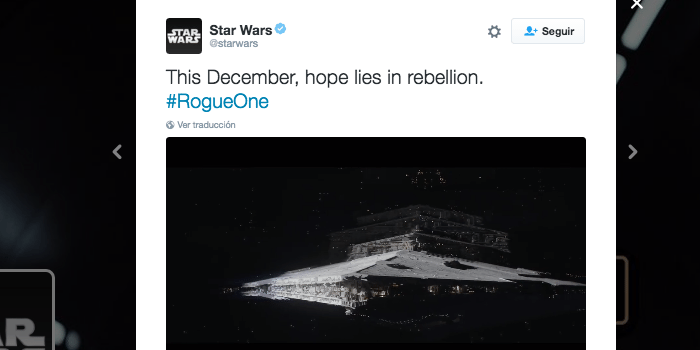 Rio talk continues to pervade social trends, but this week we focus our attention on our favourite film campaigns of the week. We talk about The Shallow, Suicide Squad and the exciting new trailer from the Star Wars franchise Rogue One.  Let’s not forget to mention one of our favourite campaigns this week Uber’s #UberIceCream.

May the Force be with you….

Everyone seems to be talking about the December release of Star Wars: Rogue One.  The Star Wars franchise released its first trailer for Rouge One during the Olympics prime time.

Disney have created quite the conversation, #RogueOne is trending and their tweet with the trailer had 60K likes and 58K retweets.  Star Wars even featured as a Twitter moment.

Don’t forget to see The Shallows...

After the initial release of the film The Shallows back in July. This week, Sony Pictures takes to creating more buzz around the shark horror film and reminds us to see this JAW-dropping film (pun intended) , keeping it on our mind using promoted tweets and the sponsored hashtag #TheShallows.

The film featuring a number of famous faces has dominated conversations this week. Warner Brothers have been promoting their new film Suicide Squad with promoted tweets and making use of Twitter’s GIFs to remind us to squad up.

#UberIceCream: The ‘coolest’ campaign of the week

The taxi company started their campaign in order to promote Uber’s newest app Uber Eats, an on demand food delivery service. It aims to deliver ice cream to thousands of people across 17 cities in the UK, all you have to do is download the Uber Eats app and order.

On this particularly hot day we are very excited, even celebrities, like MIC’s Jamie Laing took to twitter in excitement.

Twitter is full of happy people as everyone is sharing their #UberIceCream experience.  And on that note, I think it is time we ordered ours…

What Team Audiense Is Reading:

Why Under Armour's Michael Phelps Ad is One of The Most Shared Olympics Spots Ever….

Engagement Tactics To Capture A Social High-Value Target Audience: We shared this on Twitter early this week… have a read if you are looking for advice to increase engagement

Previous Story
← Athletes Are The Stars Of The Week In Rio 2016 Olympic Games
Next Story
[Interview] The Story Of The World’s First Global Flight Without Fuel, And How Social Media Helped →