#SaveSmarter With Aviva UK, #UnsuitableJourney With M.J. Bale And Sleep With Sharks Courtesy Of AirBnB 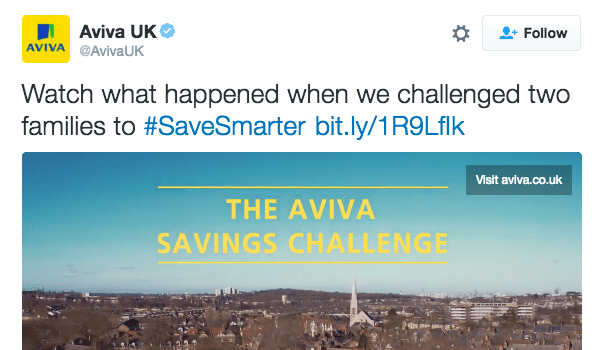 We expect to see many April Fools pranks being played by brands, but in the meantime, we have Aviva UK helping the British public #SaveSmarter, Australia’s topmost tailors and clothiers, M. J. Bale take their model on an #UnsuitableJourney and AirBnB is going to let two lucky people sleep with sharks! Plus, Twitter trends to make your weekend that much sweeter.

The internet is awash with personality tests, and with good reason! Personality Insights is a great way of understanding yourself and a brand’s audience. But Aviva UK has turned that on its head by launching their #SaveSmarter campaign. Take the Save Smarter test to see what financial personality you are - The Turbo Saver? The Time Dueller? Or like me, The Oracle?

The insurance and investments company launched an ad which pits two families against each other to see which family is more thrifty and has a better savings plan. It eventually leads you, the viewer and potential customer to take the ‘financial personality’ test, and questions your current savings plan.

Take the test, and tell us which financial superhero you are!


M. J. Bale and their #UnsuitableJourney

This is one for all those who love being suited and booted and take good care of their suits.

Australian suiters, M.J. Bale, this week, joined hands with The Woolmark company to prove that their merino wool suits can indeed stand the test of time. Taking the challenge of ‘suit vs man’, M.J. Bale asked their model to travel through nine countries in just four days - without sleep, in one suit.

Traversing through the stale air of flights to trains to dusty tuk-tuk rides, the model arrived in London to pose for the brand’s Autumn/Winter line - yes, in the same suit.

Any takers for this one?

AirBnB is back with their #NightAt competitions. After inviting guests to stay a night at one of the Waterstones branches in London in 2014, and the Paris Catacombs in 2015, AirBnB is now inviting everyone to apply to spend night with the sharks! They’ve partnered with the Paris Shark Aquarium and are giving two people the chance to stay in an enclosure surrounded by sharks. Exciting? We think so!

While the venue might be in Paris, AirBnB is making sure that the world is involved. They’ve got all their local markets tweeting the competition so that anyone, anywhere applies for this once in a lifetime opportunity.

Sharkie as a flat mate? Why not!


April Fools' Day Or Not?

Every brand Tweet we see today is going to be seen with caution. Including all of these!

Don’t forget to Tweet us any suspicious posts you see this April Fool’s Day!


And In Other News -

- Twitter is making images accessible to all. Now you can assign ‘alt text’ to the images you share so that the visually impaired have access to the description via their assistive technology. Read more here.