TOUCHDOWN: 4 Quick Ideas For Using The Super Bowl In Your Twitter Marketing Strategy 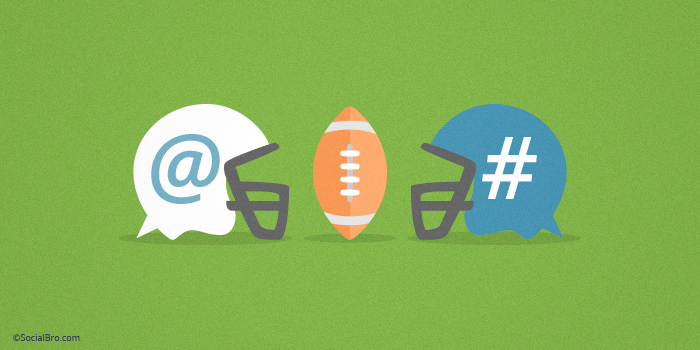 This year’s Super Bowl will be the 50th in the event’s history, with the action on the field being matched with major marketing campaigns alongside it. The clamour to have your brand associated with the annual event is highly contested, with over 114 million TV sets tuned in last year in the US alone. As a result, an ad slot is prohibitively expensive for most brands. A fact that was mocked in Newcastle’s award-winning collaborative Super Bowl campaign from last year, where they got 37 other brands to chip in to buy an advertising slot.

Last year’s spectacle drove 28.4 million Tweets during the game, so if you can’t afford an advertising slot and there’s no plucky ale brand to join up with, Twitter will be your best bet for conducting effective digital marketing around this year’s Super Bowl. With less than a week to go, we thought we’d give you a quick roundup of ideas that you can implement into your Twitter strategy before Sunday.

Decide On A Segment Of The Audience To Connect With

The size of the whole audience will be enormous, and cover a great mix of interests. Trying to please everyone will probably not fit your brand, and you’ll end up getting lost in the noise. So a more precise strategy is needed to ensure you’re focusing your efforts on an audience that matters to you. Some Twitter segmentation strategies you can use on the people who are Tweeting about the Super Bowl include:

Retarget To Relevant Members Of The Super Bowl’s Audience

The huge amount of people Tweeting, combined with audience segmentation, will provide you with ample Twitter users for you to target with future related campaigns. In one search you can find a broad group with shared interests or influences, who may be open to campaigns following up on what they Tweeted during the Super Bowl.

Even if you don’t do anything externally, the Super Bowl is a goldmine of data. Isolating your aforementioned targeted audience will enable you to discover things like their personality, their interests, and their shared affinity with other pages. This can then be compared with your current audience, or a competitor’s audience, to help you identify any differences that could potentially inform future campaigns. The amount of that audience following you, compared to a competitor can be useful for benchmarking purposes.

Look For The Angle Where Your Brand Fits

Tweeting specifically about Gridiron football doesn’t suit every brand, so don’t feel like a play-by-play commentary on the game is needed. But an event this size has many aspects. There’s tailgate parties before the game, the individual players, food eaten at home during the game, the half-time show, the national anthem, the coin-toss, and many other aspects that could be more relevant to your brand.

Last year, Volvo used Twitter in a highly creative way to drive attention to their brand during the Super Bowl using this technique. They realised that car adverts were a major part of the breaks in play, so their ‘Volvo Interception’ campaign was activated every time an ad for a rival car brand was shown. Viewers could Tweet #VolvoContest whenever they saw a car commercial, and win a Volvo. This campaign won a Grand Prix award at Cannes Lions, and rewarded Volvo with a 70% sales increase in the month following the game.

The broad spectrum of audience and action around the Super Bowl means that it’s an unmissable opportunity to raise brand awareness in a tactful manner, and conduct hugely valuable research into your audience.

Previous Story
← Quaker Oats Gives The UK A #SuperStart And Apartments.Com Tells Us To #MoveOnUp
Next Story
Optimise Your Content Marketing Strategy With Twitter Insights →