How To Get Social With Your Next Billion Customers 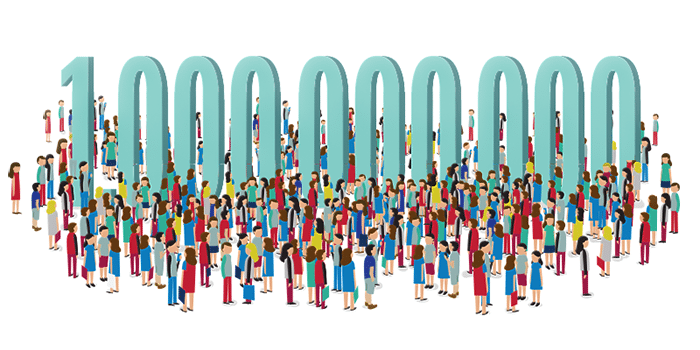 You're Gonna Need A Bigger Shop...

By 2020, it is estimated that the global middle class will have over a billion people more than in 2009. It’s an expansion that’s taking place all over the world, and these billion customers are going to be actively social. Twitter’s fastest growing user bases this year are in countries such as Indonesia, Mexico and Brazil, where middle classes are rapidly expanding. Meanwhile, there are at least 33 Million Twitter accounts in India and over 80% of internet users in China use at least two social networks. Having a social strategy in place for these markets is going to be vital.

If this sounds like an audience that would suit your brand then now is a great time to start including them in your social plans, if you aren’t already. In 2011 rapid-growth markets accounted for 80% of the global population, yet the average S&P 500 company was making only 10% of their income from them. The middle class in the Asia Pacific region alone will be spending almost $TEN TRILLION more in 2020 than they were in 2009. That’s enough to build shiny new Yankee Stadiums for each of your favourite 6,472 people!

Your marketing efforts will need to adapt to capture this audience and social media will be on the front line, here are the key battlegrounds for winning their attention and custom:

See The Bigger Picture And Use It!

Unfortunately, money doesn’t magically appear in people’s pockets. It happens for a reason and it changes things. A smart social media marketer can see these changes and use them to their advantage when necessary. For example, much of the growing middle-class will be urban, if this audience is one that would suit your brand then you could make giant strides by engaging them effectively on your social platforms. According to Deloitte CMO Eamon Kelly, “large urban centers, populated by increasingly well-educated, talented, and ambitious people, are rapidly growing on every continent.” 52% of China, and 85% of Brazil are living in Urban dwellings and both groups are on the rise. Furthermore, Google discovered that 37% of Urban Indian voters are online, which is significantly higher than the (exponentially growing) population average of 12%. Taking the time to get clued up on information like this can help to form an incisive social plan.

You May Have To Sculpt The Market

Common products in one part of the world may seem totally alien in another. Hong Kong and Shanghai Pizza Express owner Justin Kennedy spoke of how “there was not actually a market for us, we had to create one." There was fine dining and fast food, but no consistent brand doing the informal hybrid of casual and fine dining that Pizza Express have made their name with. Depending on your product, you may face a similar hurdle.

You’ll have to do more than simple selling, educating the audience on the concept and necessity for the product may need to form the backbone of your strategy. Ideas that you may not need to explain to long-term audiences could become focal points of your social posting in emerging markets. Getting these messages across to the local populace on social media will go a long way in encouraging this market to give you a go. With 91% of Chinese internet users having Social Media accounts and 38% of users making shopping choices based on recommendations from Social networks, this is an important concept to communicate.

Position Yourself With Your Page

Your new customers’ first impressions of you could be your social media page. You have an exciting opportunity to establish your brand in a way that may not be easy in a territory where there’s a higher awareness of your brand. If you’ll allow us to indulge in our pizza obsession again, we’d like to bring up Pizza Hut. They have been in China since 1990, but the differences between their perception in one part of the world and another can clearly be seen by looking at their Twitter and Weibo pages.

Pizza Hut's Twitter page in late July 2014. What is there lots of?

A giant difference here is that Pizza Hut’s Weibo page has no pizza featured anywhere. There’s steaks, coffee, wine, noodles, cake, folded napkins, knives and forks. But there’s no room for their signature product. Shifting the focus away from fast food shows how they are positioning themselves in China as an upmarket casual dining restaurant. Although the new members of the middle class are not yet particularly high up the wealth ladder, they are still aspirational and will want brands to look up to and be associated with. Pizza Hut have recognized this and are using their social media to emphasize the place in this market where they want their brand to sit.

Make Your Social As Pretty As Can Be

If you weren’t doing this anyway, you need to make extra effort to do it with these new consumers. According to Accenture’s David Sovie: "The phablet [mix of phone and tablet] screen size is hitting a sweet spot for a large percentage of consumers wanting more digitally connected lifestyles.” Two thirds of customers in China and India who are currently considering a smartphone would like one with a bigger screen.

Five to seven inch screen sizes are increasingly desired in these regions, and any flaws in your visual aspect will be magnified. If you’re sharing low-res images, you’ll look like a tramp next to your HD trumpeting competitors. With India already having more mobile phones than toilets, standing out on mobile can open up some giant markets. Layout changes to social networks, screen-size optimization, and profile-viewing habits are all things that need to be checked regularly. This will be another area where a clued-up SME can position themselves among the larger brands to a new audience who is building their perception of you.

Most of the expansion will come in the Asian-Pacific region, with China being a primary growth area. Many social networks are officially banned in China, it’s possible to find ways around to use them (Twitter has 80 million users there), but most people use one of the locally founded ones. As a result, four of the world’s largest social networks are based in China. Get to know them, what they are, and what they do because if you’re serious about capturing this market then you may need to use them soon. Here’s a brief round-up of the main ones:

Get Legally Clued Up

New markets can provide huge new opportunities, but don’t let the excitement get the better of you. You need to spend a bit of time sitting down with the lawyers and making sure you know all of the legal potholes to avoid. Xinhua, a government controlled Chinese media outlet claimed that “...to nurture a healthy Internet, we must thoroughly eradicate the soil in which rumors grow.” Not that we’re calling you liars, but in China there’s a law that a false post with over 500 shares can land you in jail. Yikes! That’s a really bad way to enter a market. Does your advertisement’s message conflict with the host country? Does it make bold claims that perhaps wouldn’t stand up to purely literal scrutiny?

Build Your Presence On LinkedIn

Last year India reached over 20 million LinkedIn users and Brazil broke 10 million the year before that. LinkedIn also launched a simplified Chinese version earlier this year, offering you a link to 5 million professionals in China, who may be able to offer tantalizing opportunities in PR, Media, and Tech that will form a cornerstone of your plans to build social media presence in China. By making the effort to create a stand-out brand on LinkedIn you can get some influential, talented, and in-demand people in new areas wanting to work for or with you.

With an extra billion customers comes a plethora of possibilities. What methods do you think will be key for making the most of this audience?

Previous Story
← 6 SMEs Winning On Social Media [And How You Can Too]
Next Story
Retweeters: Why They’re Important To Your Twitter Marketing Efforts →