UFC vs Boxing: The combat of social media

It was 4:30 am (BST) on what was supposed to be my official day of lazing around (my Sunday) but instead I was awake and ready to watch the biggest fight in combat sporting history: UFC vs Boxing!

As a kickboxing enthusiast, occasional UFC follower and boxing novice the entire experience was entirely new to me. Not only was I committing premium hours of sleep to watching an entire boxing match, I was awake before sunrise to watch it LIVE for the sake of being a part of the international money fight hype! The weeks of promotional campaigns and the curiosity of seeing how McGregor would transition into boxing admittedly broke me.

With an hour to go before the fight even began I made myself comfortable and enjoyed the pre-match drama innate within the world of boxing. Before I knew it I found myself distracted, doing what I knew best; using my Audiense insights solution to setup monitoring of a few popular hashtags (#MayweatherMcGregor, #ConorMcGregor and #FloydMayweather) which I would let run throughout the fight. I know what you’re thinking… who even does that? However, as the CEO of a tech company that is exactly what I do!

Whilst Mayweather’s win left me unsurprised the results of the monitoring left me intrigued. The temporary boxing fan within me was immediately overshadowed by my techy sensibilities. The conversation was maintained by an unusually diverse global audience from a variety of geographical communities and sports enthusiasts to financially motivated segments and avid social media users as reflected in the core segments below:

As we explore the primary affinities of the audience, it becomes clear that social media usage reigns supreme within UFC territory leaving boxing behind. Having attracted this audience boxing is looking to benefit from the recent UFC acquisition by WME as it would only increase their exposure to untapped audiences.

Out of the top 10 audience affinities (as seen below), only two accounts were boxing specific in contrast to the six accounts that were UFC aligned 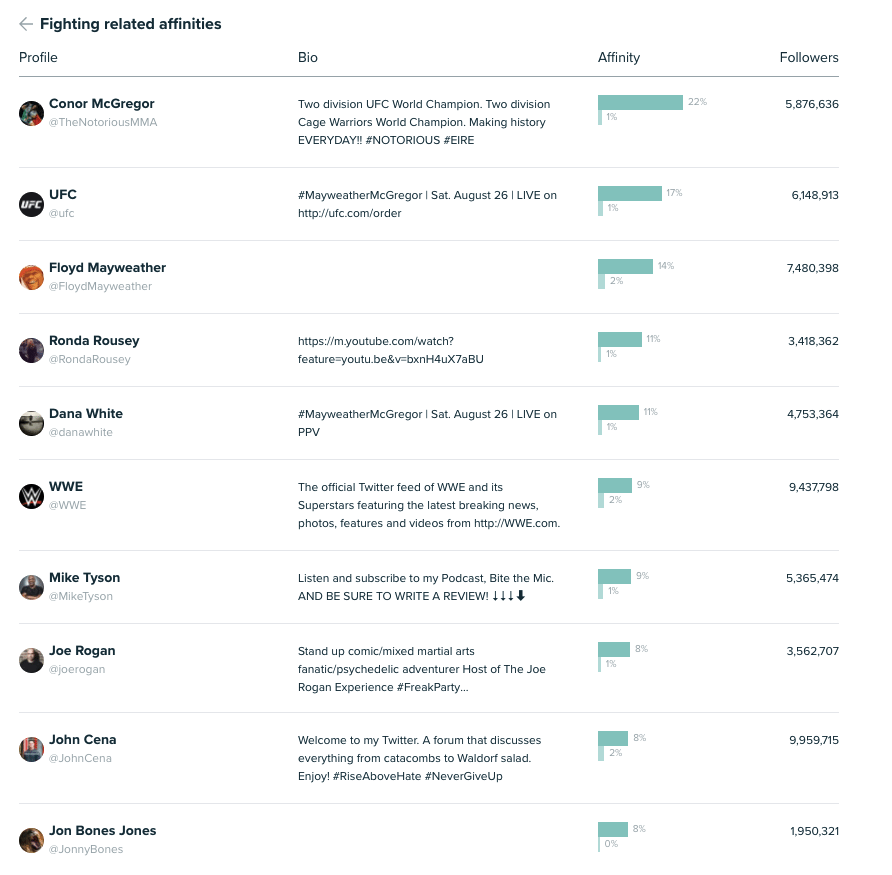 Top hashtags used during the fight:

During the combat, 19% of the hashtag mentions were about McGregor whereas the money man himself only received 16% of the mentions. Although Mayweather was mentioned less it was still a significant win for the world of boxing as they managed to entice an untapped audience that was previously only UFC and WWE inclined. 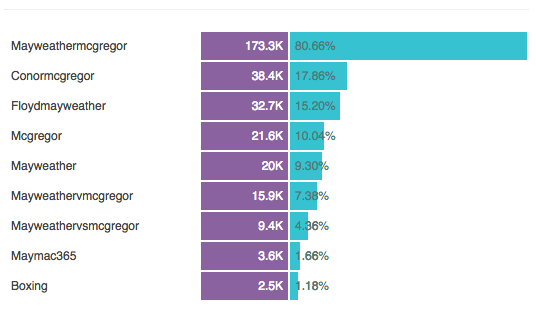 Even when exploring relevant sporting (boxing, MMA or WWE) media channel affinities (as seen below) there is an evident inclination towards the world of MMA rather than boxing. In fact, there was only one media outlet of affinity that focused on boxing (HBOboxing).

The world of boxing could action these insights by promoting similar fights, in turn, captivating an untapped audience. The use of consumer insights has the power to inform strategic decisions regardless of your industry, audience or location. What untapped audience could you uncover? Why not take a look at the FULL insights report to understand how strategic decisions can be made about sponsorships & partnerships, influencer marketing or even creating a media strategy.

Previous Story
← Summer is ending, parents are exhausted, let’s get back to school... Strategically!
Next Story
Twin Peaks 2017: Using the data to create the next big TV sensation →