10 popular social media myths that need to be busted 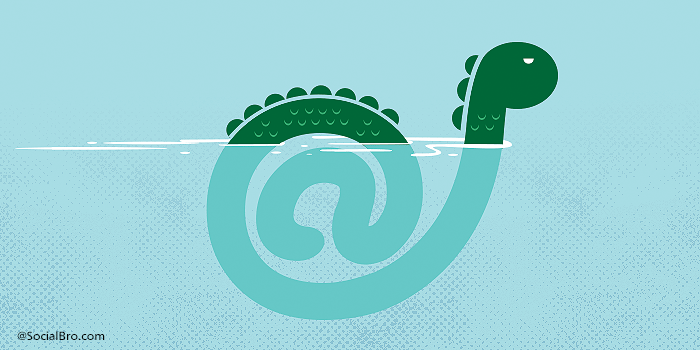 Too many twits tweet twaddle! If you’ve stopped believing in ogres, orcs, and kissing frogs, maybe it’s time to stop believing these social media myths too? Tales of trolls lurking in cyberspace and leads on Twitter being as elusive as the Loch Ness Monster circulate the marketing profession like a game of Chinese whispers. Don’t be afraid, social media can be awesome for your brand (especially if there are cute animal GIFs involved) and give your marketing a fresh spin. Show these myths the door and rid them from your marketing strategies for good.

1. Everybody is on social media

Not necessarily true, but that certainly shouldn’t stop you from making the most of it. A large proportion of your consumers are on social media, even if it’s only to create an account and observe what their friends are up to. Even better, with social media you can target people interested in your business that haven’t found you yet. Twitter has over 200 million active users, with the vast majority opting to use the site on their phones rather than on a desktop. Food for thought if you’re hoping to improve your consumer reach.

Furthermore, research has shown companies using Twitter average two times more leads than those who don’t; and companies with 1,000 or more Twitter followers get six times more traffic to their websites. If you’re savvy with your social media, there’s huge potential to grow your consumer base and generate leads. Which leads us on to the next great myth…

You won’t make your fortune by pushing out bland updates to a community of people you’re not interacting with, taking your brand online is only proven to bring benefits if you’re doing it right. Social media is exactly what it says on the tin - social - so to generate leads it needs to be used as intended. Generating discussion about your brand on social media is a simple way of raising awareness.

The key thing to remember is the success of your brand online depends entirely on the basic principle of ‘you reap what you sow’ - you’ll only generate leads if you’re actively engaging with your audience. Luckily, social networks are entirely free to use (music to your ears if your budget can’t stretch to a costly campaign). The only investment you make is time. There are numerous tools that can help you manage your social accounts: Hootsuite can boost engagement by scheduling tweets for when you can’t be there, Buffer offers similar features and allows you to manage multiple accounts.

3. Social media is too informal for business

With the idea of being more likeable comes the dreaded misconception that social media is far too informal for business. As a modern micro-blog, it does indeed attract people who post about what they ate for breakfast or their favorite member of One Direction.

The beauty of social media for business is that you can be more human. The CIA stormed into the Twitter world last month with a hilarious first tweet that re-invented people’s perceptions... by proving America’s spooks do actually have a sense of humor. The response was overwhelming and currently has over 300,000 retweets, as well as being favorited by 185,000 people. Additionally, their follower count shot up to around 629,000. Amazing really.

We can neither confirm nor deny that this is our first tweet.

A social media presence for business can be daunting if you've never done it before. It becomes downright traumatic if you believe the myth that your accounts need to be monitored all day everyday for constant content and fast responses. Regular posting is important, but too much can be as damaging as too little as it will get on everybody’s nerves. In fact, if you constantly send 140 character blasts into the Twittersphere, you could be suspended for spam or even ‘muted’ by your followers.

As mentioned earlier, there are tools available that can help schedule tweets over evenings and weekends when nobody’s around to manage your social profiles. Immediacy is vital, but even tweeps need sleep. If you’re using social media to deal with consumer queries or have a dedicated customer service account, make it clear when people are available to chat on your social profile information. Managing your consumers’ expectations preempts any frustration if you don’t immediately respond.

5. Only celebrities attract thousands of followers

Not any more. We’ll admit that Justin Bieber and Katy Perry are doing pretty well for themselves, but with the right sort of tweets your business can attract plenty of followers too. In fact, the Telegraph claimed that YouTube and Instagram are in the top ten most followed Twitter accounts, rubbing shoulders with pop megastars Taylor Swift, Britney and Justin Timberlake.

Though nowhere near Perry’s 54 million followers, smoothie entrepreneurs Innocent Drinks have proven a little humor goes a long way. Sporting a humble 195,000 followers on Twitter and almost half a million likes on Facebook, Innocent are a beloved company, thanks to their cheeky approach to marketing. Staying relevant is key to ensure the growth of your social media fan base, as demonstrated by Innocent’s tennis fun. Take a look at what Innocent get up to for tips on how to humanize your business. If you're likeable on social media, you'll become retweetable too.

Realised that 'juice' sounds a lot like 'deuce'. Decided to make a game out of it #innocentjuicefordeuce pic.twitter.com/xfocUVHTdW

6. Social media is a soapbox for my business

This dangerous myth is what causes marketing flops. If you think the purpose of Twitter or a Facebook page is to post things like ‘New yogurt flavor’ or ‘BUY SOAP FROM US WE R GR8’, think again. Treating your social media like a soapbox is inefficient. You’ll have bored people flocking to unfollow, unlike or unfriend you within a few days. Engagement is crucial. Tweets with hashtags (used sparingly, as we’ll discuss in a moment) receive two times more engagement than those without and can stimulate real conversation, rather than you tweeting and nobody responding.

Take a leaf out of @NatGeo’s book (pun intended). Robert Michael Murray told Forbes the reason they’re one of the most engaging social brands is because: “we’re born out of this idea of being a society… we bring people together who are like minded around geography, who want to share and distribute knowledge.” Nourish an online community of people that want to talk to you about your business, rather than you talking at them.

7. Hashtag everything for maximum engagement

No, no, and no again. Too much hashtagging can make you look completely out of touch. Hashtags are important to make sure you’re engaging with your target audience, or to connect with new ones, but peppering posts with every hashtag under the sun is a digital faux pas. The best example of extreme hashtagging comes from everyday users on Instagram, when overly enthusiastic people posts pics of their lunch and proceed to hashtag ‘#food #yum #salad #fork #yummy #chicken #eatclean #lovefood #lunch #lol #hashtags’. Don’t be that guy.

8. Social media is full of trolls

We don’t mean the adorable dolls with crazy-colored hair or the one that lived under a bridge terrorizing goats. In the modern sense of the word, a troll is somebody that takes immense pleasure in irritating others online. Their presence makes it even more important for businesses to think long and hard before posting.

A hideous example of a troll hijacked digital campaign was Waitrose’s somewhat naive #WaitroseReasons campaign, which asked customers why they chose to shop at Waitrose. It spectacularly backfired when trolls gleefully began mocking the brand. Do not feed the trolls.

Fortunately, the internet is also full of rational users genuinely interested in engaging with your brand rather than trying to trip you up, so the likelihood of you dealing with one is slim. But if you do, the best way to deal with trolls is remain calm and have a sense of humor - since there are no billy goats around to toss them in a stream for you. If a troll is particularly aggressive, it’s better to ignore them altogether. In addition to this, careful vetting of hashtags (to avoid misinterpretation) and attention to what you post decreases your chances of being pestered by a troll.

The most successful businesses use a multitude of marketing channels to achieve their goals, and ensure all of their communication is consistent. Incorporating hashtags into marketing campaigns that span TV ads, billboards and so on enables companies to take discussion of their brand and campaigns online.

One of the best examples of clever social media marketing comes from confectionery giant Hershey’s. They encouraged people to tweet the hashtag #CookieHQ, as a means for people to engage with each other, share recipes and discuss the product during the festive season. This simple approach apparently took advantage of the 76 percent of consumers who would be baking cookies over the festive season.

Hershey’s baking experts made themselves available for up to 12 hours a day in the lead-up to Christmas, purely to chat to consumers passionate about baking. As well as this brand engagement, the tag #CookieHQ was also swamped with users interacting with each other. Hershey’s recognised a consumer trend during the festive period and put themselves at the heart of family festivities, by creating cookie recipes featuring their own products. Dedicating staff to chat to consumers about cookies was a master stroke and more than paid off. A crafty but genius way to stay relevant and make sure their consumers kept their product in mind whilst spreading Christmas cheer. Smart cookies.

Bake up this recipe from HERSHEY’S #CookieHQ. It makes the holidays even sweeter. http://t.co/V4naILX7

10. You must be on every social network

Not true and if believed, a total waste of your time. You need to ensure whichever platform(s) you choose are engaging with your audience. It is true that not all of your consumers will use the same social networks and expanding awareness of your brand is, but the key to good marketing strategy is to know your target audience and focus your efforts.

Research into what platforms they use will save you precious time and money that could be spent on better things, like creating integrated marketing campaigns that make the most of your audience’s preferred social media channel. In addition to this, creating a profile on every single social network and failing to maintain them makes you look bad. Especially if your consumers are sending queries to an account you don’t use and as a result, getting angry.

Are there any other myths about social media for business you feel need to be busted for misleading social media marketers everywhere? Let us know.

Previous Story
← Why investing in research, data & insights is more critical than ever
Next Story
[Case study] How WWF used audience intelligence to deliver key messages to relevant stakeholders →