With 70% of marketers looking to increase their investment in social media advertising in 2015 according to Salesforce’s 2015 State of Marketing Report, and media research unit Magna Global reporting that digital advertising spending is set to equal TV by 2019, the future top marketers will be the ones who master the monetization of social media.

But 83% of marketers are still wondering how to find, segment and target their audience on social media. With a bit of ‘know-how’ and the right segmentation tools, Twitter Ads can be used with precision targeting, giving you great ROI. This ability to reach the exact people you want via Twitter tools and its Ads platform is partly why Promoted Tweets are over twice as likely to drive a conversion than organic Tweets, and give you a greater conversion rate than both Facebook and Pinterest. 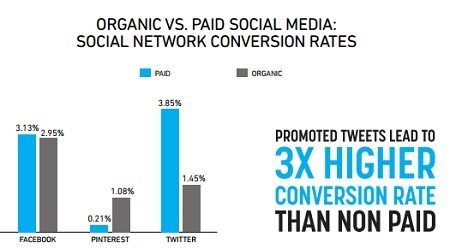 Here are the insights and advanced techniques you need to seriously turn up the revenue dial for your Twitter Ads.

The Tailored Audience Campaign functionality in the Twitter Ads platform is an untapped goldmine and the secret to great ROI. It basically allows brands to define their own groups of existing and potential customers, and connect with them on Twitter with relevant ad messages. In short, you are in 100% control of the list of people/companies you are targeting. As a result, no money is wasted as you only advertise to the precise people you wish to reach, right the way down to the individual.

How do you create the perfect Tailored Audience list for your Twitter Ad campaign? Easy! Twitter marketing platforms with the right segmentation and targeting tools should give you a vast number of filtering options such as: user location, keywords in the user bio, influence rating, competitors followers, language, entity type (i.e business or person), gender, number of followers/following and many more. More importantly, a good Twitter marketing platform should also allow you to create Tailored Audience lists based on content-based filtering. For example; Twitter users mentioning a particular event your company will be at or users mentioning one of your competitors. Here’s the best part. Once you’ve done your content-based filtering you can refine your search with demographic-based filtering.

For example, imagine an national cider brand wanting to target specific attendees of a large rock festival with Twitter Ad campaigns. The company could simply target all the people who have mentioned the rock festival on Twitter in the last 6 months. But that’s not their target audience, so without taking into account the demographics of that audience, the cider brand could be wasting a lot of money on creative ads to the wrong audience. Let’s face it, cider is great but everyone is not a cider drinker. Instead, they could use both content-based filtering (i.e the users who have mentioned the festival in the last 6 months) as well as demographic-filtering (gender, keywords in the user bio, location etc) to create a whole range of lists for different subsegments of their target audience.

The Twitter Ads platform helps you optimize campaigns by allowing you to select a primary advertising objective, such as followers, leads generated, or Tweet engagements, and pay only for actions that help you work toward that objective. This will ensure you only pay for what matters to you. 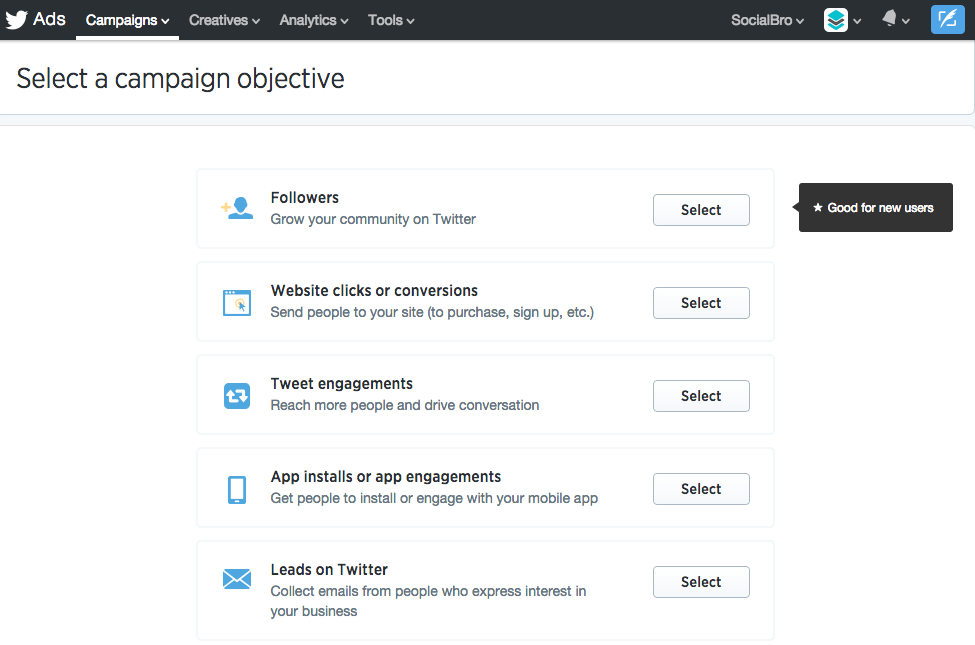 Twitter’s new Transaction Values feature allows you to see precisely how much was spent when someone clicked on your ad and made a purchase, helping to give you a precise amount of the direct ROI from your campaign. Experiment with which product, or combination of images is driving the highest amount of sales to get the maximum return on your investment. During the testing of this feature, LiveNation found that it provided useful insights on the business results that Twitter Ads were providing. They ran Promoted Tweet campaigns to boost ticket sales and their analytics revealed that they achieved a ROI of 819% with it. 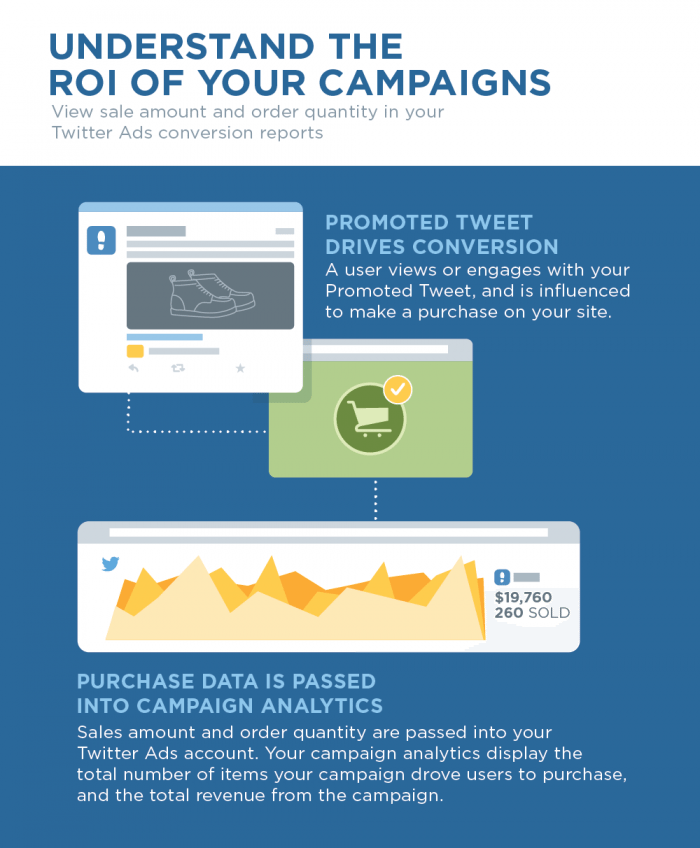 4. Experiment With Your Bid Price

When setting up your campaign, you will need to enter what you’re willing to bid for each completed objective (such as a new follower, an app download or a click). The higher the bid, the more likely it will be that your Promoted Post is seen whenever someone who fits your campaign’s criteria is due to see an ad. Twitter will suggest a bid price to get you the best results, but you may find that you want to deviate from this suggestion depending on the importance of the campaign.

According to Microsoft, marketers integrating their email and social media marketing efforts are experiencing improvements in CTRs of up to 158%. How can you work these channels in synchronicity? If you have a mailing list, match that audience up with their Twitter account by using an email integration tool. A cross-channel approach allows you to amplify your brand’s message across multiple channels, strengthen relationships with potential customers, and re-establish a connection with audience groups who are no longer engaging with your emails.

The way people consume media is constantly changing, adapt to your audiences preferences - email may still be the point of call for some customers but others may spend their time on social media. Take advantage of this by making a list of all the emails who didn’t open your latest email marketing campaign. Then use an email integration tool to marry up those contacts with their Twitter account, then execute a tailored audience campaign targeting them with a tailored message or an offer to catch their attention (such as 40% off).

Is your website not optimized for mobile? You could be wasting money on clicks that don’t convert. Only target desktop users until you have a mobile version of your site ready to take advantage of Twitter’s mobile audience. Alternatively, if you’re promoting something that is best consumed on mobile or is aimed at people on the move, then removing the desktop option may increase the rate at which people follow your calls to action. 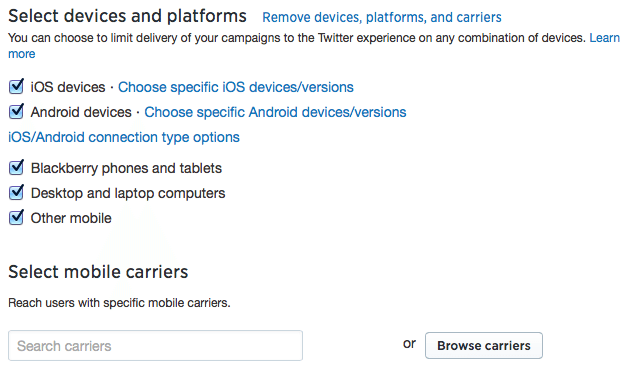 You can include multiple Tweets in your campaign (they recommend a minimum of three) to see which ones perform the best, and then use your best ones. Experiment with images, your wording, different offers, and possibly the precise piece of content you’re sharing. Twitter will identify which ads are performing the best and begin to only show those ones to ensure that people are seeing the ones most likely to convert them. The more you test, the better the winning result will be!

These are some of the ways that we’ve noticed can noticeably improve your ROI from advertising on Twitter, if you’re interested in finding out more then we also have an eBook on Twitter Ads. But we’re always up for hearing about creative new ways that you can market your brand using Twitter’s advertising platform. What have you found to be the best ways to get effective results from your Twitter Ads campaigns?

Previous Story
← 15 Tweetable Social Media Statistics To Influence Your Marketing Strategy
Next Story
[Interview] How Did Innocent Drinks Drive A 35% Engagement Rate On Their Twitter Ads? →

Eye On The Money: How To Be Smart With Your Ad Spend