There are two important parts of delivering a message: the delivery and the message. If one is a dud, it doesn’t matter how good the other one is. You wouldn’t read a story if it was printed underneath a bus, and the most atrocious film in the world is still a car-crash if played on an IMAX cinema. The same applies to your brand storytelling, you can have the most heartwarming and engaging campaign in the world, but if it’s not delivered effectively your time and money has been wasted.

You wouldn’t want to spend months creating an incredible story only for nobody to hear it, would you? Every day there are brands who do this by not thinking carefully about how to present their message to their audience. An intelligent delivery strategy will make it easier for people to hear the story you want to tell, optimizing your chances of turning them into customers. Here’s how to ensure that the story your brand is telling doesn’t get missed:

During Kevin Spacey’s talk at Content Marketing World, one of his key ingredients of storytelling was the audience. He described them as not caring “about the platform--they care about the content.” Does this mean the platform doesn’t matter? No! It means “the audience wants control,” and Spacey believes we should “give them what they want.” How do we do that? They should be able to engage with the content regardless of the platform. Some people prefer Twitter, some spend their time on Instagram, others don’t follow brands on Facebook.

By giving your audience as many options as possible to take in bits of your story, you are increasing the chance of them discovering it on a platform that works for them. With this approach, you also have the opportunity to tell your story in a way that suits the different social networks.

Earlier this year, Twitter released an update whereby you can upload four pictures as part of one Tweet. It provides creative marketers with endless possibilities to create noteworthy social content, but visual storytelling in one form or another became a whole lot easier. Instead of trying to get a whole message across in one image, you can fit in a beginning, a middle, more middle, and an end!

You're closer to the perfect Shock Top pour than you think. Follow these four steps and nail it every single time! pic.twitter.com/C23dqQmHX9

The above example leads to our next point. Stories give you a great opportunity to demonstrate how your product can change or improve your consumer’s life, it can turn information into meaning. This is much more effective than simply telling someone how great your product is. For example, IKEA could simply tell you how great their products are as the #IKEAHomeTour makes its way around the country. But demonstrating one of their creations and how it would look in your home is far more likely to get DIY enthusiasts engaging with their campaign as it comes to their town.

#DIY tip: Use fabric remnants as artwork in RIBBA frames, like the #IKEAHomeTour Squad did! http://t.co/o4WV1nqkXA pic.twitter.com/w4wxOj5pR8

4. Use location targets to help make them relevant

How does the kid in rural Idaho connect with a story in the same way that a young Manhattaner might? They could have different lifestyles, tastes, and needs that your brand could help with. There are ways to speak to them both, but perhaps you could give them both a place in the story that’s relevant to them? Facebook posts and Promoted Tweets can all be targeted at specific areas. This makes localizing content easy, giving you the opportunity to tweak your branded story to make certain areas feel more involved than if you’d solely focussed on the biggest market, or at least one section of it.

5. Have a focus point that tells every last detail of the story…

If you want to go in-depth, find one place where you can tell a fully-rounded engaging story. It can be a film, an article, a mini-site, a podcast, or any other medium that allows you to add plenty of meat to the bones of your narrative. You can elaborate greatly about your journey, your people, your ideals, and paint the full picture for your audience. Have this piece of content as a central hub that other areas of your campaign can point to.

An example of this would be The Chance, a campaign run by Nike’s Academy to find Soccer players from all over the world and look to get them professional playing contracts. On their YouTube channel, they posted a documentary detailing the journeys of all the players and their times at the academy.

6. Give them chapters of the story elsewhere

This approach means you can give them snippets, teasers, trailers, stills, quotes, and single perspectives of the story on more limited social channels to drive traffic to the main story. These should still convey the campaign’s intended message, but in a more manageable chunk.

This Tweet is taken from a later version of the campaign above. It keeps the story going, driving interest in the campaign and fuelling a desire to keep in touch to see how the players perform.

Their first match together was a 4-2 victory. #TheChance players @DarioVandenBuys and Safeddine enjoy it. pic.twitter.com/oHOQBvHW

The best stories often have strong characters, and brand stories are no different. Having a character who is always associated with your brand can be a major asset to your marketing efforts. If well-defined, they can convey key character traits that align with your audience and be a flexible building block in your brand’s storytelling. Also, a recognizable character can already have a well-documented backstory or set of quirks so you don’t need to fill in the audience every time they see the character. Facebook posts with brand characters included in them tended to increase social shares. 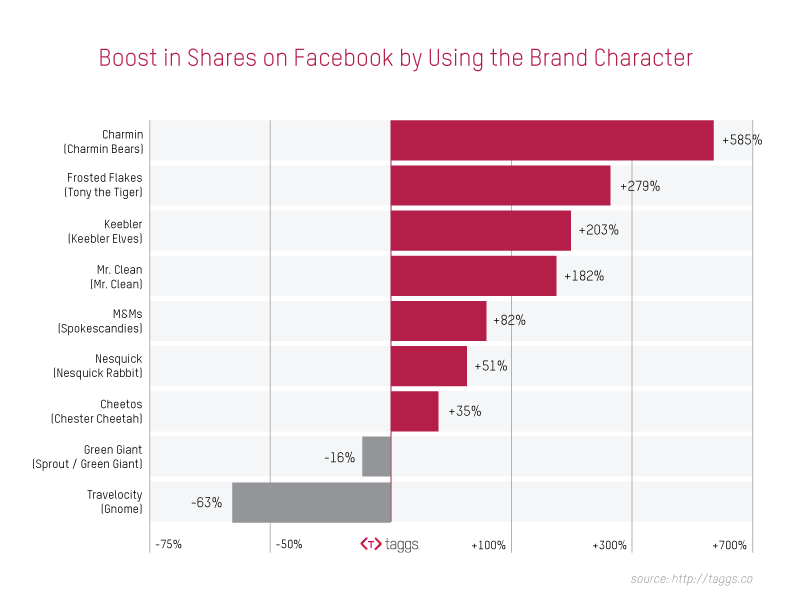 The effect that various brand mascots had on their brand's Facebook shares ( Source).

They can work really well on brands where the product or service isn’t as exciting as jetpacks and roller-coasters. For example, Charmin are only selling toilet roll, yet Facebook posts including the Charmin Bears increased shares by 585%. The characterization of the big, fun bears means that conversations about going to the bathroom can come from them and feel more sharable. Without them, it could feel like a creepy person behind a screen wants to know your personal habits!

There’s more than one way to spin a yarn. Telling tales needn’t always start with ‘once upon a time’. We’d love to hear from you about any great ideas you have used or seen to support a brand’s storytelling. We’re listening...

Previous Story
← NY vs. LDN: Which Fashion Week was more ‘on-trend’ according to Twitter?
Next Story
SMACKDOWN! Why wrestlers are getting more social media interaction than your brand →