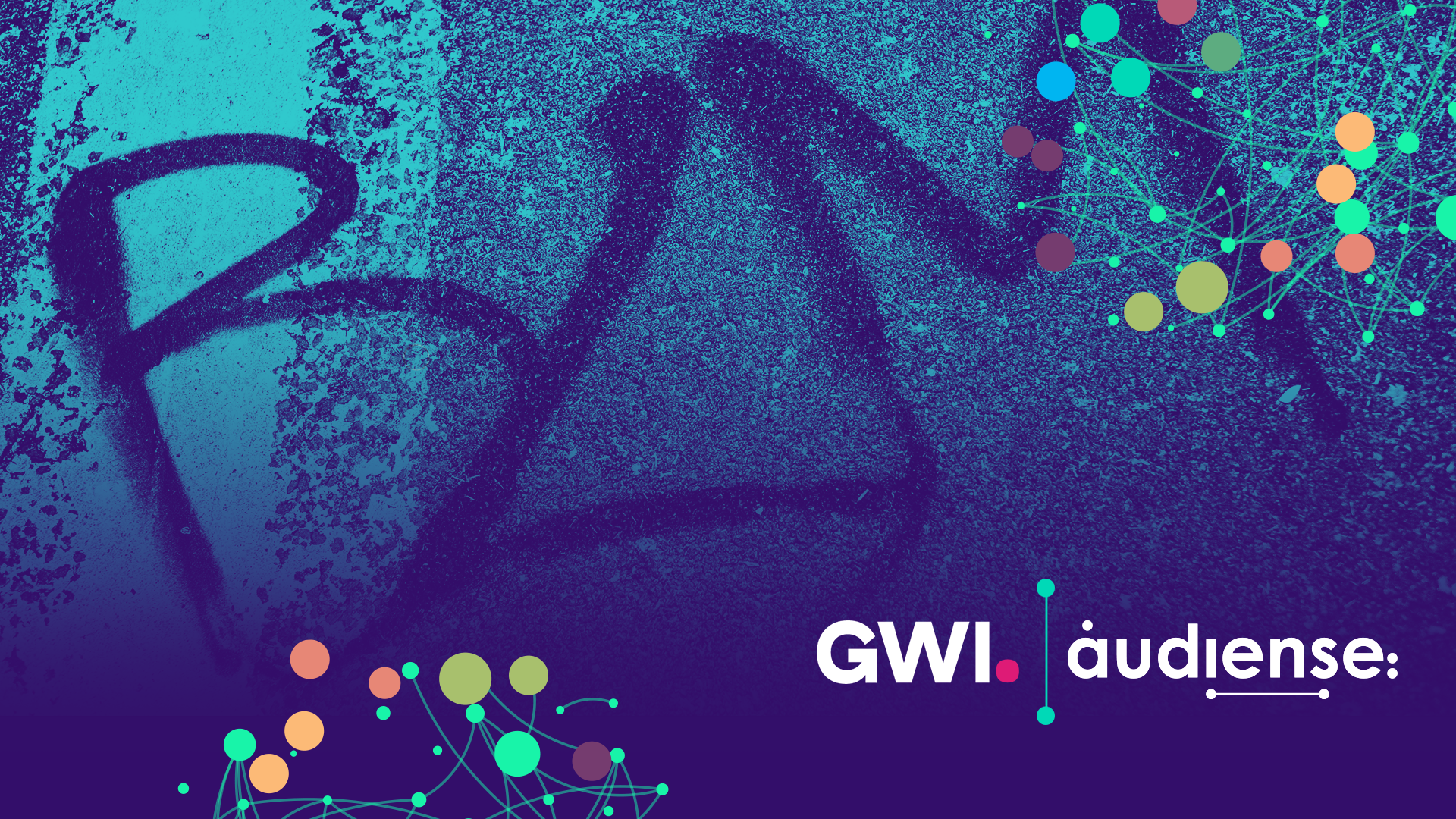 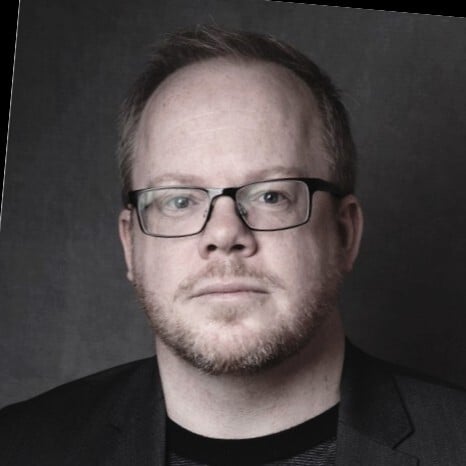 In this article you can learn:

Few social and political movements have shaken the world in recent years like ‘Black Lives Matter’. Seven years after it first came to prominence in the US, the movement saw a huge resurgence and international attention earlier this year after the death of George Floyd and is now a socio-political earthquake which will inevitably shape both governmental and organisational policy for decades.

Understanding audience perceptions of such a movement is vital for brands, governments and third sector organisations, especially given the fact it is a popular movement driven primarily by public support and massive surges of social media activity. For example, the #BlacklLivesMatter and #BLM hashtags have seen close to 1.5 million mentions on Twitter alone in the past month.

As is also the case with issues such as sustainability and LGBT+ rights, brands need to be on the correct side of history here. Furthermore, this isn’t just about brand reputation as many younger consumers now feel that these influential multinational organisations have both the power to enforce change and a responsibility to help deliver it.

The tools for measuring a socio-political earthquake

Successful ‘brands for change’ such as Nike (social justice) and Unilever (sustainability) have demonstrated that delivering on these expectations isn’t about PR messaging and simple, performative acts – it is about clear and impactful action. These are complex issues and so investing in data and insight to inform understanding and strategy is absolutely vital.

Thankfully, the tools for this kind of work already exist and I’m an advocate for using blended data sources to inform this kind of insight, especially where huge social media movements are concerned. Here I’ll be using Audiense alongside GWI, a global survey data platform together to identify a wider range of insights and learnings.

Over the course of the past six months GWI have been tracking audiences’ response to the pandemic, and whilst this is great in itself what is even better is that this dataset is entirely free to access. As part of the fifth wave of this dataset GWI added a section on audience attitudes towards ‘Black Lives Matter’ – and it is here that my analysis will begin… 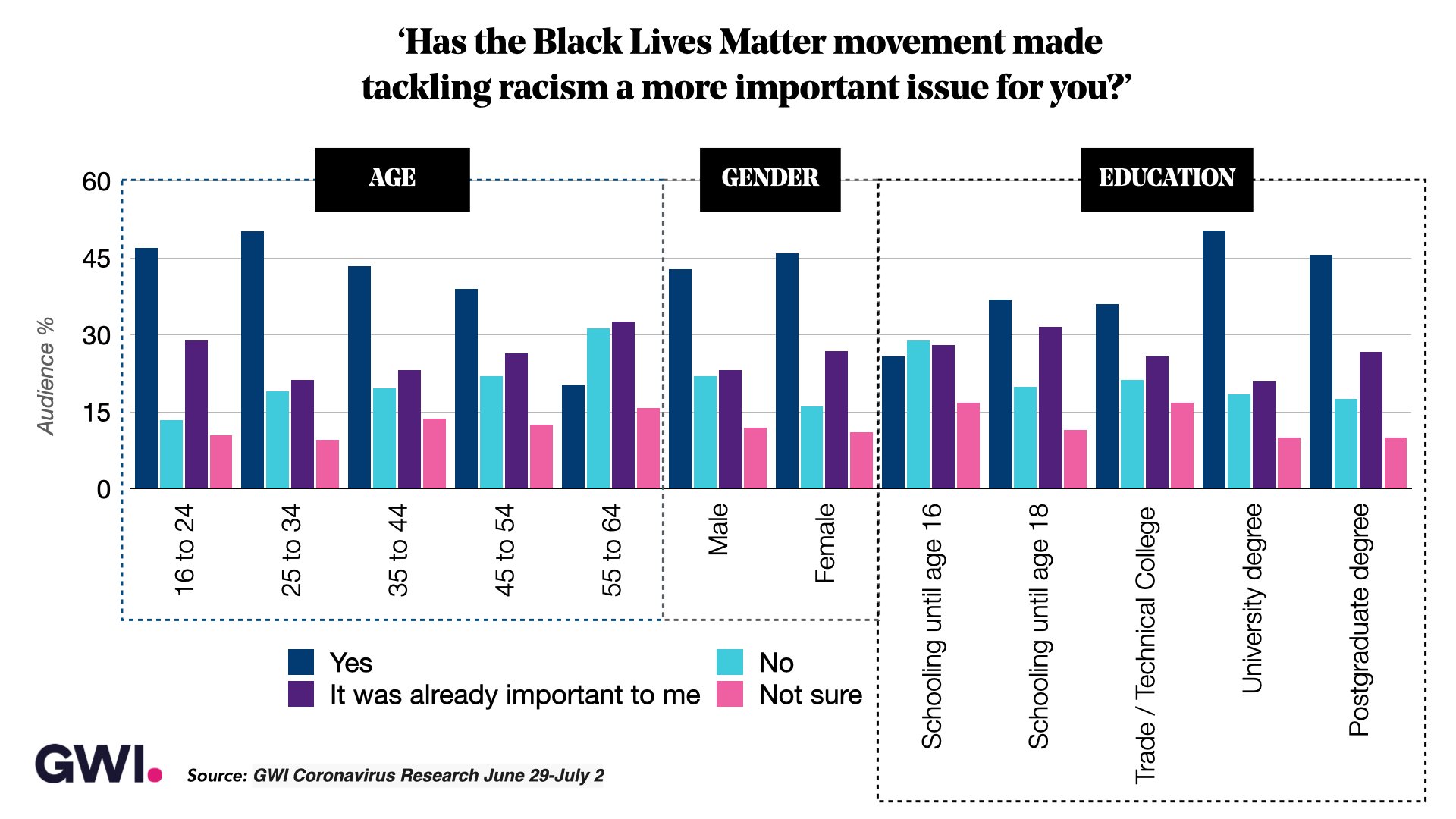 Let’s start with looking at the Demographics - the chart above tracks responses from a global audience of over 15,000 internet users (aged between 16 and 54) to the question ‘Has the Black Lives Matter movement made tackling racism a more important issue for you?’

As a movement which has resonated most with younger audiences it isn’t a surprise to see that the most positive responses here are from younger age groups – which of course are always an area of focus for most global brands trying to capture the attention of potential future customers. Of these groups it seems the 25 – 34 year olds have been most persuaded by BLM when it comes to tackling racism.

What I also find interesting here is the group who would have grown up in the 1960’s and 1970’s and responded, ‘it was already important to me’ – and I’d like to assume this is due to the movements for equality that were active in these decades.

Whilst gender saw a fairly balanced set of positive responses, those with University or Postgraduate degrees were the most influenced by the movement.

While this GWI data is incredibly useful for understanding how demographics are influenced by ‘Black Lives Matter’ we can use Audiense social media data to go even deeper here.

As audience strategist David Boyle pointed out recently, Demographic analysis has some clear imitations while audience clustering based on interests, needs and attitudes often provides a more ‘human’ perspective on audiences – and so this kind of clustering feels like an essential step for a subject like BLM. 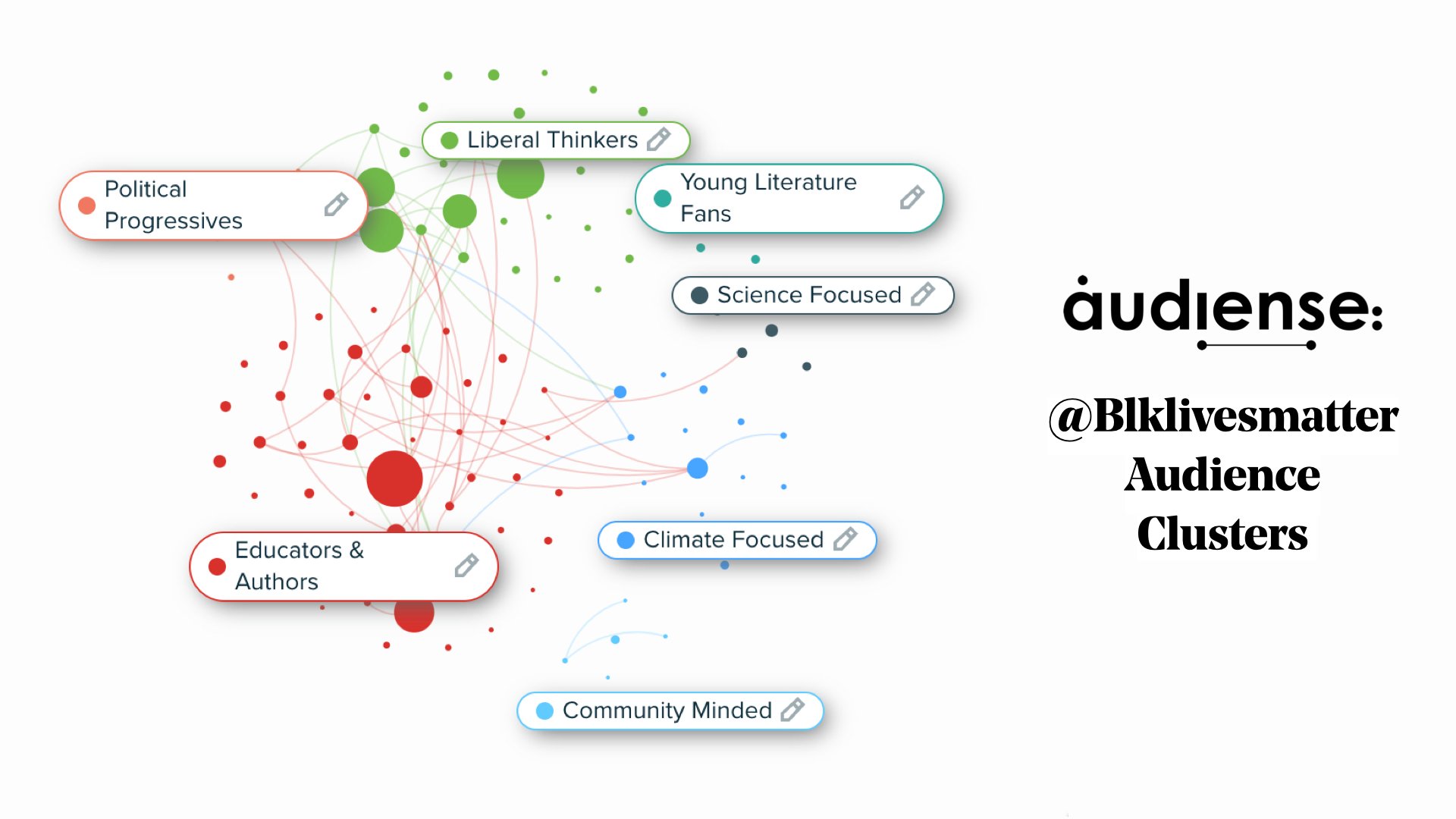 Analysis of a quarter of a million followers of the official ‘Black Lives Matter’ Twitter account (@Blklivesmatter) allows us to consider them in a more detailed way than as a single homogenous group – as shown in the chart above.

Here we see that key groups include educators and authors, a group who are community minded and also a group who share strong concerns around climate and sustainability. In my experience, this kind of segmentation insight into attitudes and perceptions helps drive creativity in ways that ‘colder’ data such as Demographics often cannot.

Another useful tool within Audiense is their IBM Watson powered personality analysis. Using this for the ‘Black Lives Matter’ Twitter audience it becomes clear this group are unafraid of challenging authority to drive positive change, seek connectivity with others and are committed to helping others – and these are factors that I’d recommend brands considering appealing to in their messaging.

If we combine this Audiense data with what we’ve learned from GWI demographics we now have a very clear picture of who this ‘Black Lives Matter’ audience are, their motivations and their values. 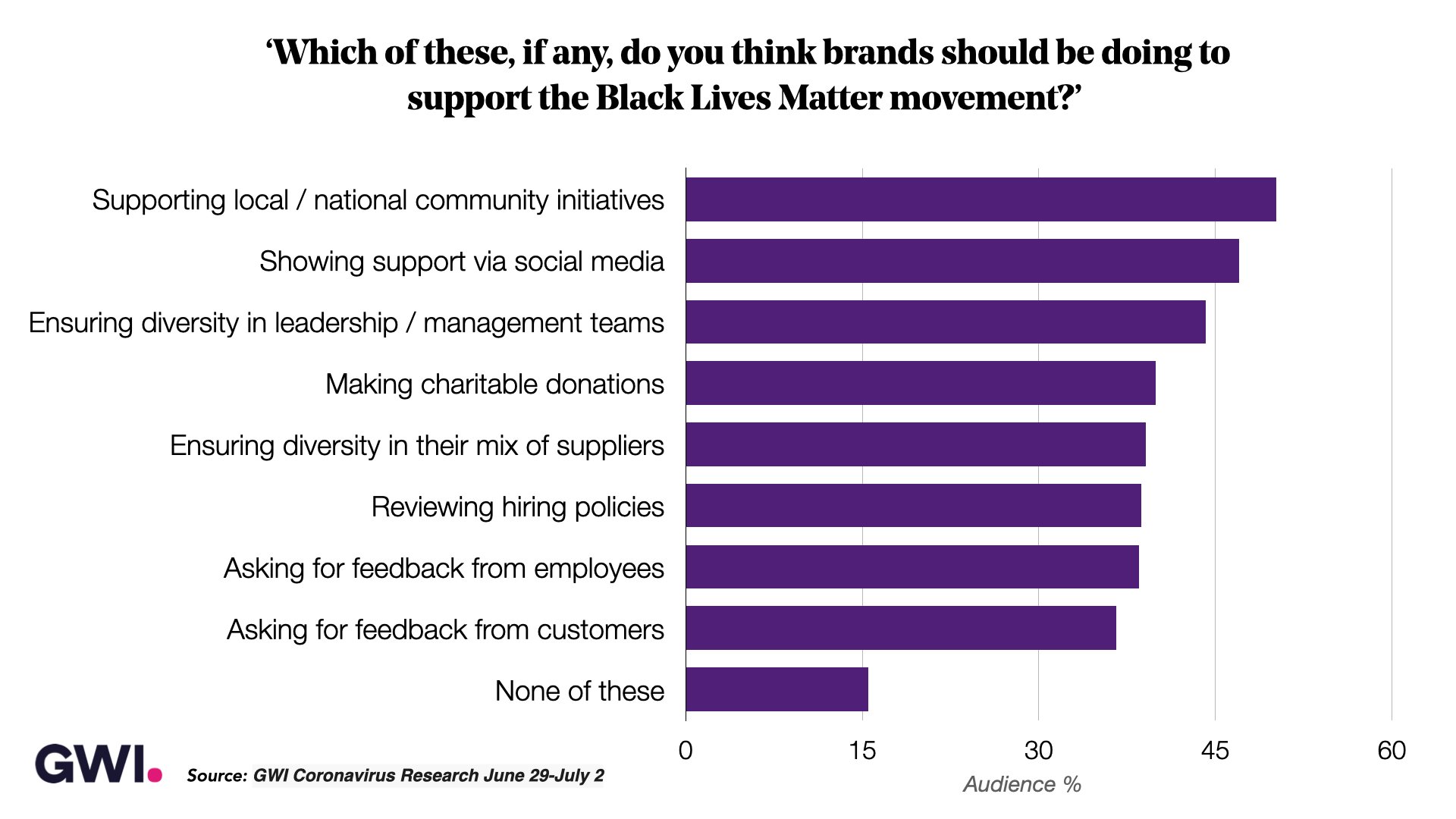 Whilst it is vital to understand the demographics for who BLM has the most meaning, where the GWI data is even more helpful is in determining the appropriate responses brands need to take. The most prominent of these were supporting local and national community initiatives – and the choice of these are likely to depend on the size and focus of the brand.

For instance, a multinational corporate has the resources to deploy global and national initiatives, whereas a smaller, localised brand would be better placed to focus on their local and loyal communities. Either way, there is much that can be done here to raise awareness and educate communities.

University and Postgraduate educated audiences showed a strong preference for brands addressing racial inequality in their own leadership and management teams – and I can’t help but feel that’s a positive sign for the future as these groups begin to enter and influence the workplace.

Social media activity, presumably to drive awareness and support the appropriate anti-racism campaigns, was favoured by younger audiences who understand the impact and effectiveness of these platforms.

Equality should be reflected in brands social media advertising too especially as, according to GWI’s recent ‘Connecting the Dots’ 2020 trend report, only 11% of Black US internet users felt represented in the advertising they saw.

Your brand – your plan?

The insight provided here confirms that brands need to take action to respond to ‘Black Lives Matter’ in a positive way. Whilst I’d encourage every brand to thoughtfully consider how they can support this movement; the brands who are most favoured by ‘Black Lives Matters’ supported need to accelerate this. 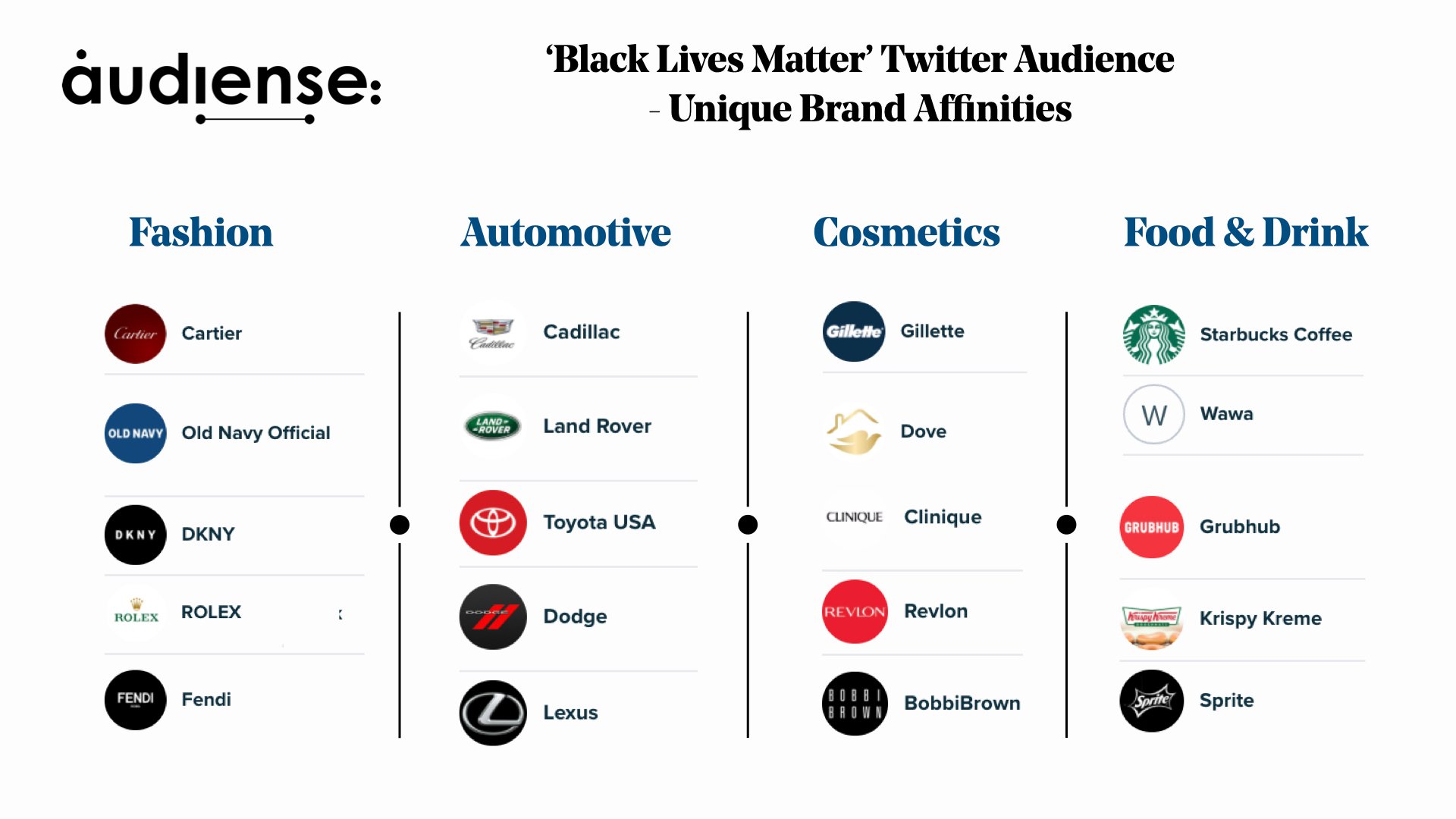 Using the available Audiense data from Twitter followers of the official BLM account it is possible to understand which brands they see the most unique affinity with. Based on the insights show above I’d recommend that anyone from the marketing teams of Cartier, Cadillac, Gillett or Starbucks who is reading this address their brands long term response to BLM, if they’ve not done so already.

Whilst important, more than just marketing and comms will be expected here too as these brands often have an affinity and connection with their audiences which can help drive positive change, as well the power to influence Government policy and actions.

Build a better world with data

In the past five years we’ve seen data and insight gain a reputation as a tool for political and social disruption and manipulation – but as with every tool, it is those using it and their intentions who are most responsible here and not the tool itself.

Socio-political movements such as ‘Black Lives Matter’ feature complex, nuanced issues and so insight and informed decisions are needed when engaging with them.

So here is my invitation to analysts, marketers and brands - let’s show the world what can be achieved when we put these powerful tools to use with good intentions.