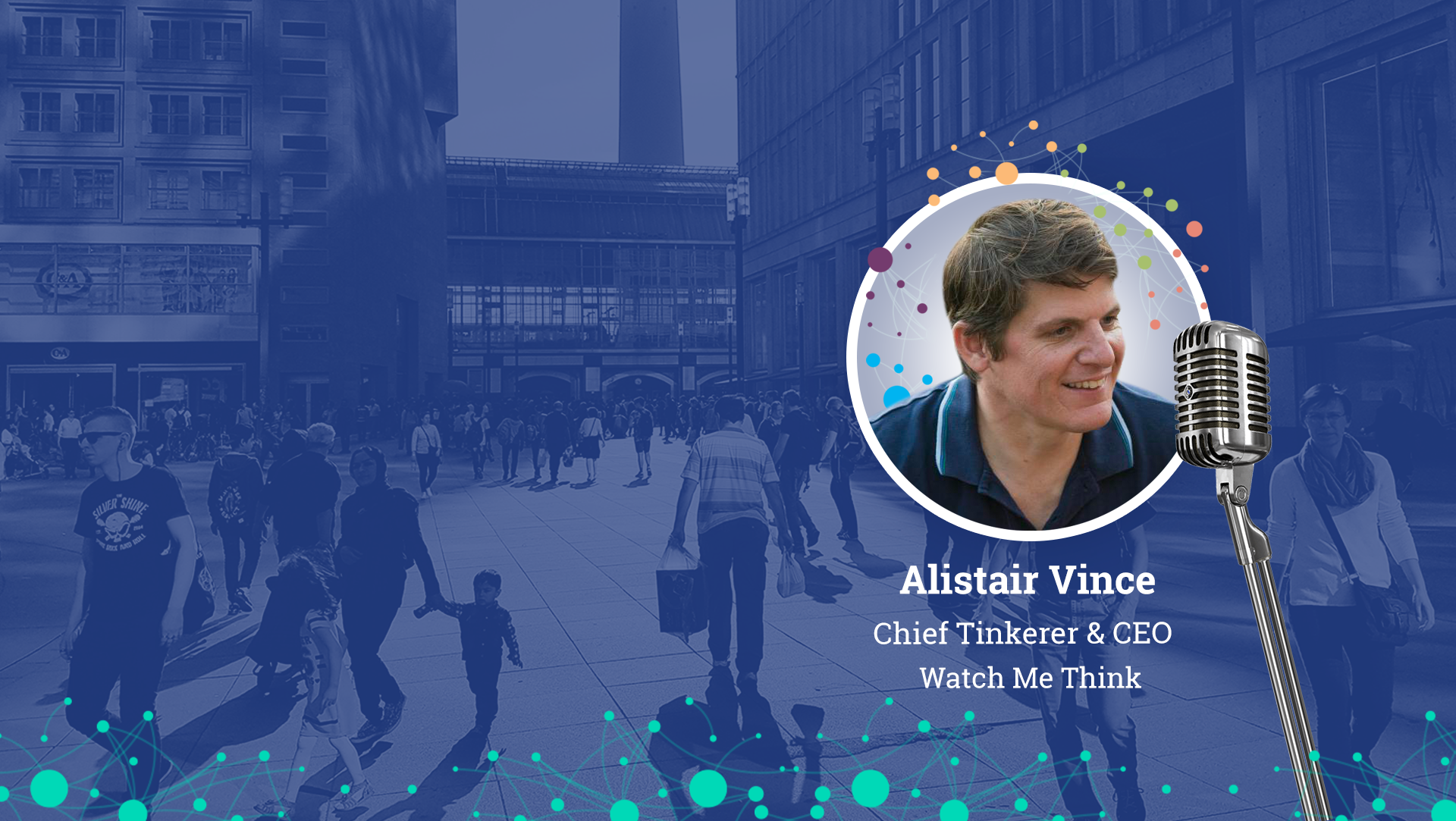 [PODCAST] The path from human geography to behavioural insights

On this episode of Data Stories: Leaders at Work, I sit down with Alistair Vince, co-founder, CEO, and Chief Tinkerer of Watch Me Think – an independent research agency focused on consumer insights: Watching people use products or interact with services, analysing what they say and do, and advising clients on how to optimise their products or services.

Although Alistair spent most of his career in sales and business development roles, he always wanted to start his own business. Starting Watch Me Think with two of his friends in 2011, Alistair and his co-founders have grown the company to include global offices. Serving as the CEO of Watch Me Think, Alistair had wanted to save the world from crap, flawed research and bring a fresh, knock-your-socks-off kind of approach to research.

Struggling to choose a course of study at university, Alistair decided on a degree in Human Geography at the University of Liverpool. While he didn’t excel in anything, he did enjoy geography. Alistair says the human geography side of the field explores anthropological and sociological aspect of geography and brings understanding to people and cultures. Fascinated by the subject since a young age, Alistair says this study of social data is very much what he now does at Watch Me Think.

Falling into market research as a tele salesperson, Alistair wasn’t aware of the field. He says it’s all about understanding people. When he entered field sales, he met a lot of people, and he had the opportunity to meet people around the world. For the first part of his career, he hadn’t been doing what he really wanted to do: the people side of market research – until they launched Watch Me Think.

Alistair had worked with his co-founder John in Australia, and the two had always wanted to work together again. Their strengths complimented each other: While John was good at opening the doors to new business, Alistair was more an account man, nurturing the accounts. During a 2008 seminar, they learned about observational research in an anecdote about people struggling to bend over while using a washing machine. In response to this observation, the washing machine’s company lifted the machine higher. Alistair and John were inspired by a washing machine to start Watch Me Think.

Coming up on their tenth anniversary, Watch Me Think brings to life insights about products or services that people feel they already know. By hearing language and watching behaviors via video, Watch Me Think is able to find these insights. Everything they do is centered around a smartphone camera, GoPro, video camera, and video capture. Every data input stems from video.

Watch Me Think then pivoted from video to bringing in observers to watch behaviors. The people element is crucial to their business: the people who pull the insights and who really investigate the data – all of things that machines cannot yet do. This is why the company has grown as much as it has.

Prior to staring Watch Me Think, Alistair had a thousand failed ideas, and when he was working for someone else, he always wanted the freedom to do what he thought was right rather than being told to do something. He only wishes he had started his own business earlier. Celebrating Watch Me Think’s 10-year anniversary, Alistair credits the people behind the company, including his two partners.

He also credits great mentors. He advises anyone looking to start a business to ask people for help. They will be generous with their time. He recommends getting in contact with someone who is doing what you want to do. Alistair also recommends surrounding yourself with people who are better than you. And he tells entrepreneurs to pay yourself from the beginning. Overall, he says, just do it - Make the jump.

Regarding leadership, from the perspective of a smaller organisation, Alistair says a leader needs to be someone whom people can rely on , have confidence in, communicate with, and have fun with. There needs to be a level of empathy. He says a leader is someone who employees respect, as well as someone they can disagree with. Watch Me Think is a fairly flat structure with a focus on the team, which gives them a retention level unheard of in the research industry. Watch Me Think provides a profit-sharing scheme, flexible working, unlimited holidays, charity matching, along with vacation retreats. Alistair says a happy workforce produces good work. And clients get used to working with the same people.

Regarding competition, Alistair says that Watch Me Think obsesses about their customers, not their competitors. When you say video, people have a preconceived notion of what that means. Alistair says their job is to educate their customers. They also offer a newsletter and annual speakers event to both clients and colleagues alike:

Alistair says the 100 and the speaker event are not about Watch Me Think. They are both curated to help others.

Alistair recommends the Bad Blood podcast. It describes what not to do as an entrepreneur: Don’t build a business on lies and bullying. Alistair has always done Vince Days: book a day off work but not tell anyone at home. He goes to galleries and museums, walks around London, Manchester, and other places. He’s looking to be inspired, and Vince Days keep him going to this day. He says it’s a wonderful way to recharge the brain and get ideas of what to do for his company.

Alistair stresses the importance of positive friends who will tell you, “You’ll smash it today” when they know you have a big presentation. He says not to underestimate how powerful it is to have someone who has your back. He says loads of people helped Watch Me Think on their journey. His co-founders taught him how to sell and how to be a better person.

Alistair’s vision for Watch Me Think is to continue on the same path by working closely with clients, growing every year, and having a fantastic team. There is a leadership team in each region, and they run everything. Watch Me Think is a people business, and an employee business, especially with its profit-sharing scheme. Alistair is actually going on sabbatical soon as of Dec 2021 for a few months.

The full version of the podcast with Alistair Vince can be listened here: