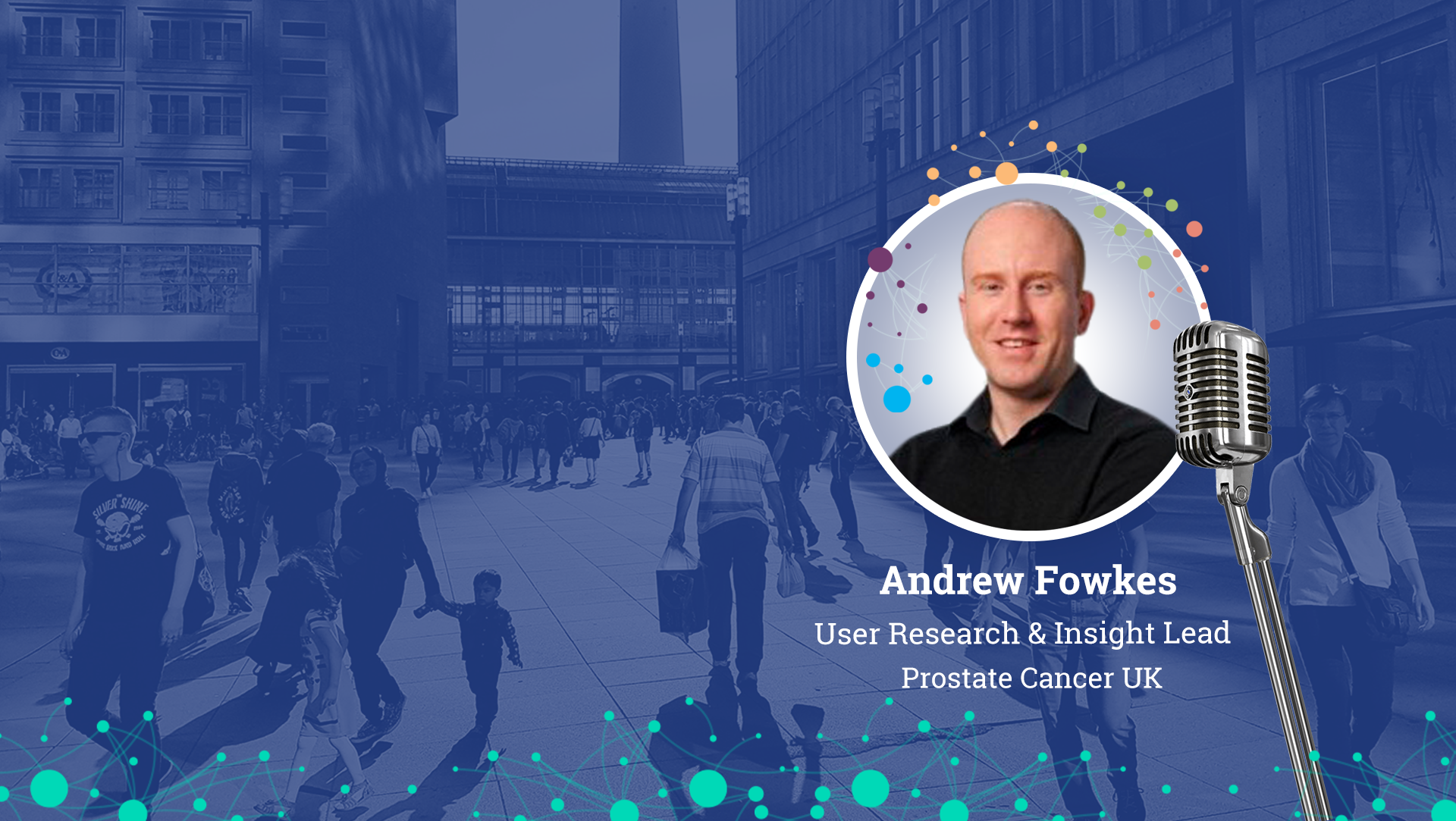 On this episode of Data Stories: Leaders at Work, I sit down with Andrew Fowkes, User Research and Insight Lead at Prostate Cancer UK.

Andy starts out by saying his professional origins fall into two spaces. After he finished his masters, he was looking for marketing roles, but he also liked analysis. Stumbling across a role at an agency named Virtual Survey, which is now known as Insights Consulting, he fell into a position that served as a great training base.

Andy also had a history degree; he liked telling a story with large amounts of data. With an interest in the qualitative side of the profession, he found he was doing quite a bit of quantitative research. And because there is much to quantitative analytics, he’s done mainly that throughout his career. He discovered he was better with numbers than he thought he was. He found himself both falling into his quantitative analysis role and making a calculated decision to pursue it.

Once he finished his history degree, Andy had been looking at a lot of information. He enjoyed telling the story and bringing it all together - the secret to a good history essay. A history or politics degree gives a person good analytics and storytelling skills, and these skills proved useful in his professional sector. To this day, Andy uses the same skills from his history degree to create a presentation. He picks the three or four things he wants people to come away with, and he uses evidence to make those points.

Prostate Cancer UK is working to tap into populations that are already in tune with fundraising to help them. They are also working on making more people aware of their organization to support men who need help. It comes down to raising awareness and finding people who can drive growth from a fundraising perspective. While they are very good at catering to their core audience, they are looking to expand their audience, as well as expand access and awareness.

In Andy’s career path, he transitioned from an agency role at EDF to a client-side position at Prostate Cancer UK. EDF was a different type of organization in a different sector, but he did great work there. The move was partly strategic, but he also found his new role interesting. Not only is his position at Prostate Cancer UK working for a great cause, but it’s also an opportunity to use his skills.

Andy thinks the value in client-side work is synthesis, bringing together different insights from different places. Because he is constantly looking at so many data sources, whether it’s commissioned research or in-house data or syndicated information, he can make sense of the data as an agency professional in a client-side role.

When Andy was working in an agency, he was surrounded by agency people, which was a great thing for learning. Working with clients helps him see how people understand data when they’re not looking at it day-to-day. He feels he can influence change and shift the direction of the agency.

Andy points out the difference between agency-side and client-side roles is that while working for an agency, you’re seeking a solution for the client. For example, if building a segmentation for a client, you need to know what people you’re working with and what you’re going after. The client doesn’t want to know how it’s built; they want to know who to target and market with the segmentation.

For others interested in making the move from an agency to client-side work, Andy says that client-side people are looking at what you’ve achieved in terms of decision-making. If someone has worked on large-scale projects, an agency will look at the capability of delivering the project. For the client-side, they’re more interested in seeing what’s changed as a result of that project: what influence have you had on the agencies you’re working with, how you’ve changed their direction or helped them grow with the work you’ve been doing.

Andy wishes he had known a couple of things before he began his marketing research career. First, he says it’s a marathon, not a sprint. When starting out a career, a person may become hyper focused on moving up. It’s more about deciding what you want to do and where you want to go. Deciding what you’re good at and what you like doing should guide your career. Usually, they are the same thing. Once in you’re in your career, Andy says don’t worry too much about promotions.

Andy thinks the skills essential to be a research professional or insights practitioner depends on the level you’re at. In the beginning, you’ll need attention to detail and curiosity. From that point, as you get more experience, you should also be able to see the big picture and be a storyteller. People take three or four points out of a presentation. Building a story into those three or four points are the best presentations. The best agency-side people understand the organization says Andy. And from there, if you can get into the client’s mindset, you can really take off in an organization.

Regarding personal or professional development, Andy admires cyclist Mark Cavendish who has won the Tour de France and who came back from difficult circumstances. His story shows you never give up. Depend on the people around you when times are difficult, but you never give up.

Andy does read books and listen to podcasts, taking in lots of different perspectives. He’s not looking just in the market research space. There are strains of thinking outside his industry that have a strong influence on him. The best book he’s read is Competing Against Luck by Clayton Christensen: it’s about jobs to be done theory related to design.

People hire products to do jobs for them. For example, McDonald’s discovered that people were buying milkshakes in the morning, and in this discovery they realized that people were driving to work and wanted something to last the length of their commute. Great new product ideas come from consumer insights. Hello Fresh is an example of jobs to be done theory: people don’t have time to shop but want to cook at home.

What stands out to Andy in today’s research market is understanding where those need states are. People will hire a product to do a job for them. When Andy does research in product development, he is much more focused on understanding those needs, understanding social data. If you can build a product that fits the need the best, then you will sell, and you will grow and develop.

Regarding mentors, Andy says different people at different times helped him along his path. Seeing new perspectives and being open to new perspectives shows that there’s always somebody better than you at something. Andy credits his first boss, Karen Schofield at Insites Consulting, for giving him the basis for growth and for showing him how to run projects and how to communicate with clients. Tom Wormald who now works for Blue Yonder helped Andy change his view of analysis. He helped him focus on the three to four points that people will take away from a story. Gonzalo Texeira from EDF taught Andy how to make client-side effective, how to influence up front, ensuring insight is involved in the development of the product.

Andy says a person learns all the time whether it be new techniques or new approaches or new business problems. The market evolves with events like covid-19. Focusing on what people need, what products fit into their lives versus what is commercially viable has value.

In terms of networking, Andy thinks talking to the startup community, project managers, people who are working on that next big step and who are looking to grow is helpful. It allows you to influence the direction of the role you’re in. Understanding what these people do and how they go about it and how they understand consumers and how they build products that meet their needs is critical. Andy also recommends networking in the market research industry.

For those interested in a career in market research and insights, Andy says the most important thing to know is what do you like doing. If you like your day-to-day work, you’re more likely to be passionate about your work and be good at it and be happy. Marketing research and insight involves a balance of attention to detail and telling a story with data (rather than just collecting it). There are roles that steer toward those two aspects. It’s a diverse industry. As you grow in your career, you may move toward telling the story and working with the client.

The full version of the podcast with Andrew Fowkes can be listened here: