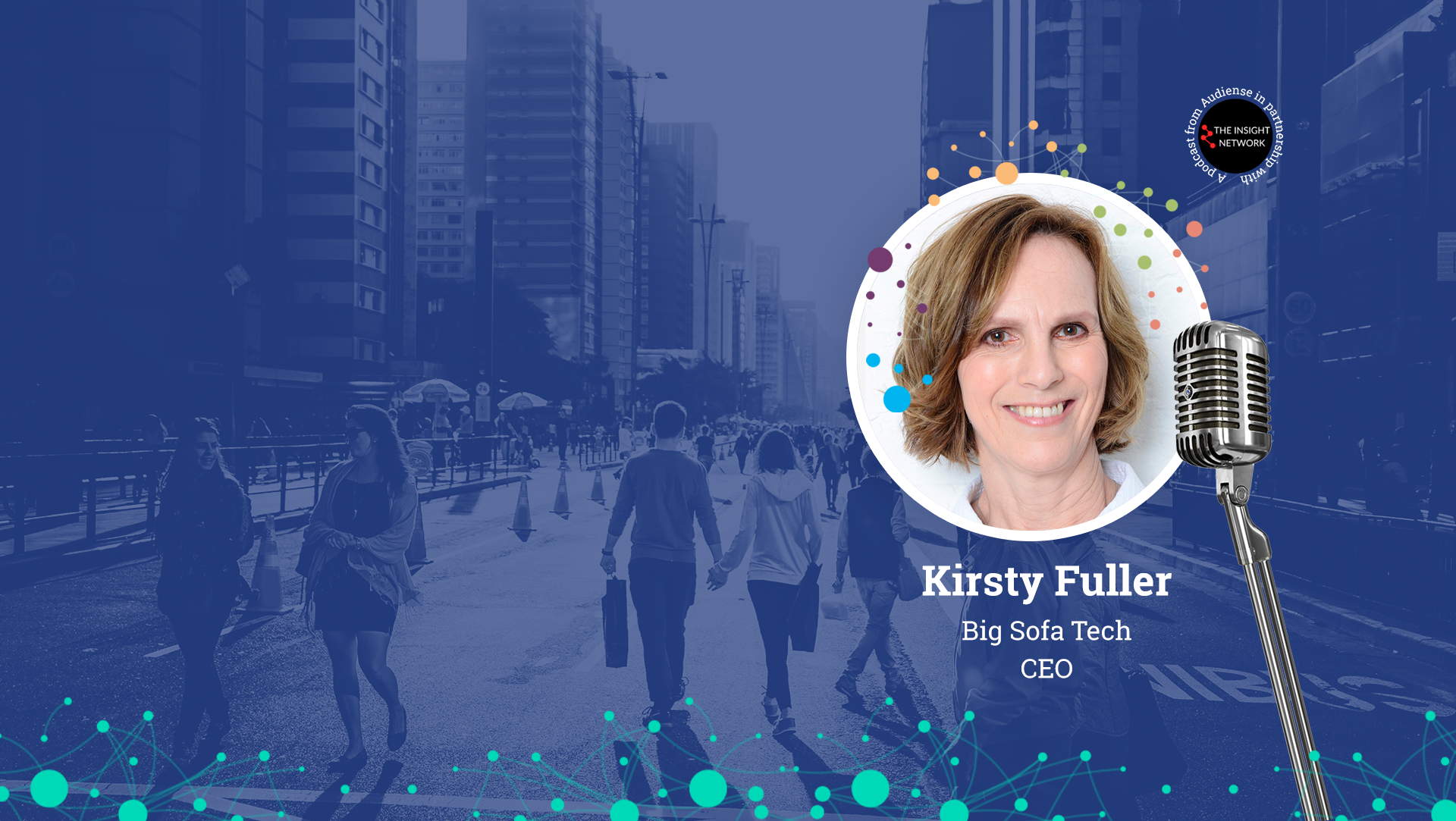 On the nineteenth episode of the Data Stories: Leaders at Work podcast, we talk to Kirsty Fuller, CEO of Big Sofa Technologies.

From an early age, Kirsty was determined to pursue a ‘commercial’ direction with her career. After receiving a degree in modern languages, she was hired by Communication Research where she used her background in French and German in a number of qualitative and quantitative settings. The work was interesting, but the environment lacked career structure, guidance and inspiration. Kirsty quickly moved on to Gillette. Unfortunately, the company experienced a change of strategy just a few years later.

The entire research industry was in an evaluative mode. Instead of saying ‘here’s what we can do,’ it was focusing on ‘here’s what’s not right.’ This involved a lot of quick summary, as well as appealing to the lowest common denominator. Kirsty felt that there was an opportunity to better serve customers through contextualization, working across markets to understand people, culture and values.

After leaving Gillette, Kirsty was hired at RDS to set-up their international offering. She continued to double-down on the idea of context. How did social structure, cultural value and inherited behavior provide a lens to the present? Her background in languages gave her the chance to dig deeper, think in a different way and gain better insight.

Fighting for gender equality in an ‘old male culture’

One of issues that had an impact on Kirsty’s early career was the fight for gender equality. At Gillette, she saw the best of the worst of leadership – an ‘old male culture’ that didn’t promote talent, or inspire others. Kirsty realized that she would have to work harder and be more intentional with how she presented herself. She continued to believe that there was a ‘better way to deliver the best.’

Although, the shift was incremental, Kirsty eventually decided to use these values and turn her joint-venture with RDS into Flamingo, an independent company. There was no ‘blinding light moment.’ Kirsty and her partner, Maggie, built the company from humble beginnings, self-funded with no marketing department and just enough money to cover overhead. It was about slow, organic growth. No fanfare, just a desire to provide a quality service with great people.

Vision is only as powerful as the individuals behind it

At times, it was difficult to be a woman in business, but Kirsty and Maggie’s leadership styles were complementary. While Maggie was more internally-facing and focused on recruitment and cultural values, Kirsty was externally facing, committed to relevance, evolution and positioning. Kirsty attributes their success to having the right combination of people and believes that a vision is only as powerful as the individuals behind it. Flamingo eventually grew to 350 people in many different countries.

Leaving Flamingo was difficult, but after 20 years, Kirsty felt like it was time for something new. She enrolled at the London School of Economics to pursue a Masters in Health and International Development. The experience was humbling because it was the first time she felt ‘old’ and no one knew what she had done. It was odd, but refreshing, to have to earn respect based on what she was saying and delivering at the time, not her role or track record.

About a year after leaving Flamingo, Kirsty began to entertain the idea of joining another company. She missed leadership, and she had a desire to test her skills in a different type of environment. Kirsty was asked to join the board of Big Sofa Technologies. This led to her being asked to step into the role of CEO.

As a public company, Big Sofa seemed like a significant departure from her time in the private space. Kirsty found this transition easy however because she had grown accustomed to reporting in after selling Flamingo to Omnicom before her departure. The biggest shift was moving into a completely masculine space. Kirsty had not thought about gender in a while, but found that technology was largely dominated by men. It was a double-edged sword. On one hand, she could milk the ‘rarity’ of her presence. On the other hand, it made her miss the equal representation of some of her previous stops.

Automated analysis tools are not a replacement for strategic client insights

While the research industry is changing, Kirsty feels like new, automated analysis tools are not a replacement for strategic client insights. Everyone should be confident with numbers, but there is a need to appreciate people in a broader context. Instead of focusing on methodologies and benchmarks, companies must continue to be responsive to clients. See the value of all issues and appreciate the importance of data capture and evaluation. Digital methodologies will continue to increase due to COVID-19.

For now, Kirsty plans to enjoy working at Big Sofa, as well as focus on Purposeful, a charity that strives to secure the voice and place of adolescent girls in Sierra Leone. Kirsty believes that this work is not only important, but necessary. She is excited to move Big Sofa forward and close the ‘say-do’ gap through a cutting-edge visual insight system, which provides a unique ability to re-mine, re-interrogate and playlist data. Kirsty encourages others to listen, think and hear. Know what your ‘special thing’ is and excel at it. Let business be important, but don’t let it take over your life. You’re more than what you do.

The full version of the podcast with Kirsty Fuller can be listened here:

Previous Story
← Money makes the world go round! 4 key learnings from the Financial Services sector
Next Story
Believe it or not, people are generally good judges of character →