3 Steps to Protect Yourself From a Twitter Hashtag Horror

We've all been stopped in the street by an overzealous flyer giver or an enthusiastic pamphleteer. It's an awkward conversation that no one wants to have. When organisations use hashtags to force conversations on social media, this is what they're doing. Offline, people are polite enough to decline with a simple side step and they’re on their way again but the speed and anonymity of online can bring out a different side of people.

You wouldn’t free fall from a cliff, so why jump out on a limb before setting up the safety net? Before creating a social campaign encouraging users to join-in brands need to stop, listen and think. Stop, define and compare your brand image with the public perception. If there is a variance between the two, tread carefully and proceed with great caution. Secondly, listen to your audience, is the topic relevant or are you channeling the ventriloquist we all have within and forcing the words from their mouths. Lastly, think!!! Sounds simple right? WRONG. Be prepared for any situation, think about the different ways the hashtag can be interpreted and used: be prepared for every situation.

Many brands have learned these lessons the hard way, with these three principles, you might avoid being the next brand with a hashtag horror who goes viral for all the wrong reasons.

STOP: Take a look in the ‘mirror’

Sometimes we have to take a good long hard look in the mirror and be honest with ourselves. And if you're not honest with yourself, other people definitely will be. Think about how the brand or industry is perceived by the public, could your hashtag be hijacked by negative consumers?

Here’s where the NYPD went wrong. It seemed like a straightforward campaign to product UGC (user generated content). The NYPD asked Twitter users to post photos of themselves with officers using the hashtag #myNYPD and the result was more than they bargained for:

Free Massages from the #NYPD. What does YOUR Police Department offer? Tweet at #MyNYPD pic.twitter.com/IFWr8exuqH

The #NYPD will also help you de-tangle your hair. #myNYPD pic.twitter.com/nrngQ1bOWv

Responding to the fiasco, Deputy Chief Kim Royster stated: "The NYPD is creating new ways to communicate effectively with the community. Twitter provides an open forum for an uncensored exchange and this is an open dialogue good for our city."

Unfortunately when a campaign hashtag is hijacked and goes virals for the wrong reasons there’s really not much you can do. The NYPD’s response was not to shut the whole thing down and hide from it, they accepted the consequences.

Although the predicament could have been avoided if they’d only thought about the different ways the hashtag could be used. Even if the NYPD believes it does the best work, there's a long history of controversial stories about their policing. Twitter’s public platform makes it difficult to perform ‘take backsies’. Brands have to anticipate all possible outcomes; the negative as well as the positive.

So the next time you think about starting a conversation you won't be able to control - take a look in the mirror, understand how your brand is perceived and consider all possible outcomes.

Take a good look at your audience and the platform you're using. With 89% of 18-29 year olds using social networks, you might just have a young, active audience.

Black Milk's Star Wars Day gaffe is an example of completely misunderstanding your audience. Black Milk is known and drooled over by geeks around the world. Famous for their R2D2 bathing suit, Black Milk's audience is a hybrid of the fashion chic and the geek. Why they decided that posting this for Star Wars day would work, we’re not sure. 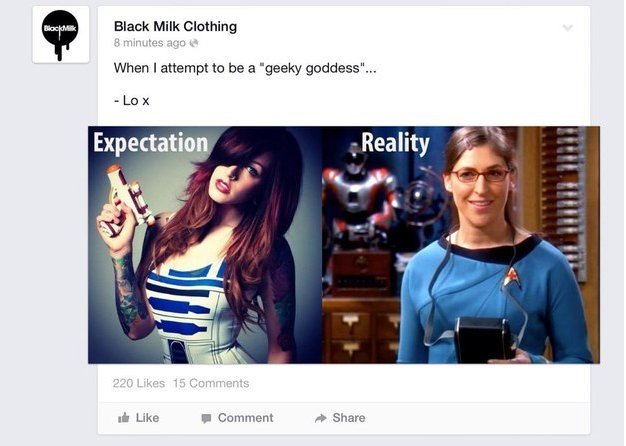 Anyone involved in geek communities knows the issues women often face at conventions, so this one touched a nerve that eventually exploded into a full blown posting battle on their Facebook page. Especially since their "joke" contradicted their core principles and offended an audience who are familiar with The Big Bang Theory. This BuzzFeed article is full of screenshots of frustrated, offended fans who could no longer be motivated by Black Milk's free international shipping.

Remember your audience. Know who they are and know what issues they're facing. A simple understanding of their audience could have made Black Milk more aware of these issues. It's not hard to do your research and avoid massive mishaps like these.

The final lesson. Now that NYPD has made their mark on the social media world with a gaffe that will go down in history next to #McStories, there are some ways that hashtags can be effective.

Understanding the concept of the ‘hashtag’, knowing what it's about and what it’s primarily used for. Hashtags are an excellent way for brands to track social activity surrounding a campaign. However, they’re designed to provoke global, trending conversations. They make it easier for multiple Twitter users to communicate without having to follow you.

Design your hashtags to not only be relevant to your audience but also the platform. Consider the #WaitroseReasons campaign, the promoted hashtag went downhill after users responded with ridicule.

Think about your brand, don’t force it, would users really want to interact with the hashtag? Listen to your audience, do some research as to how they converse with your brand or similar brands.

Audi created a campaign by simply listening to its audience. One Twitter user was so persistent in her love, want and need for an Audi R8, coining the hashtag #WantAnR8 they decided to give her one and create a campaign based on that hashtag. Tweeting, posting and filming the entire giveaway they created some excellent content for the campaign. Users caught on and quickly started tweeting with the hashtag.

I want one. Me saying that proves a lot. right? RT @Audi: #WantAnR8? Prove it. http://t.co/0E3NstzZpq pic.twitter.com/EZvvdKqDaP

Oh, @Audi! Stop teasing! Just meet me at my place with the keys! #WantAnR8 pic.twitter.com/DtZBHJYOzV

The campaign was successful, not only did users continue to interact with the brand on Twitter but because the hashtag had such a great response Audi repeated the campaign again.

Twitter tells its users about trending topics because it wants people to tweet. But brands need to be aware that once a hashtag takes off there is very little they can do to control it, like a nude photograph once it's out there - it's out there.

Forget how many muscles it takes one to frown or smile, think about how much effort it takes for someone to take your hashtag and turn it against you.

The moral of the story is know your brand, your audience and the platform. If you stay true to these three principles, you might avoid being the next brand who goes viral for all the wrong reasons.