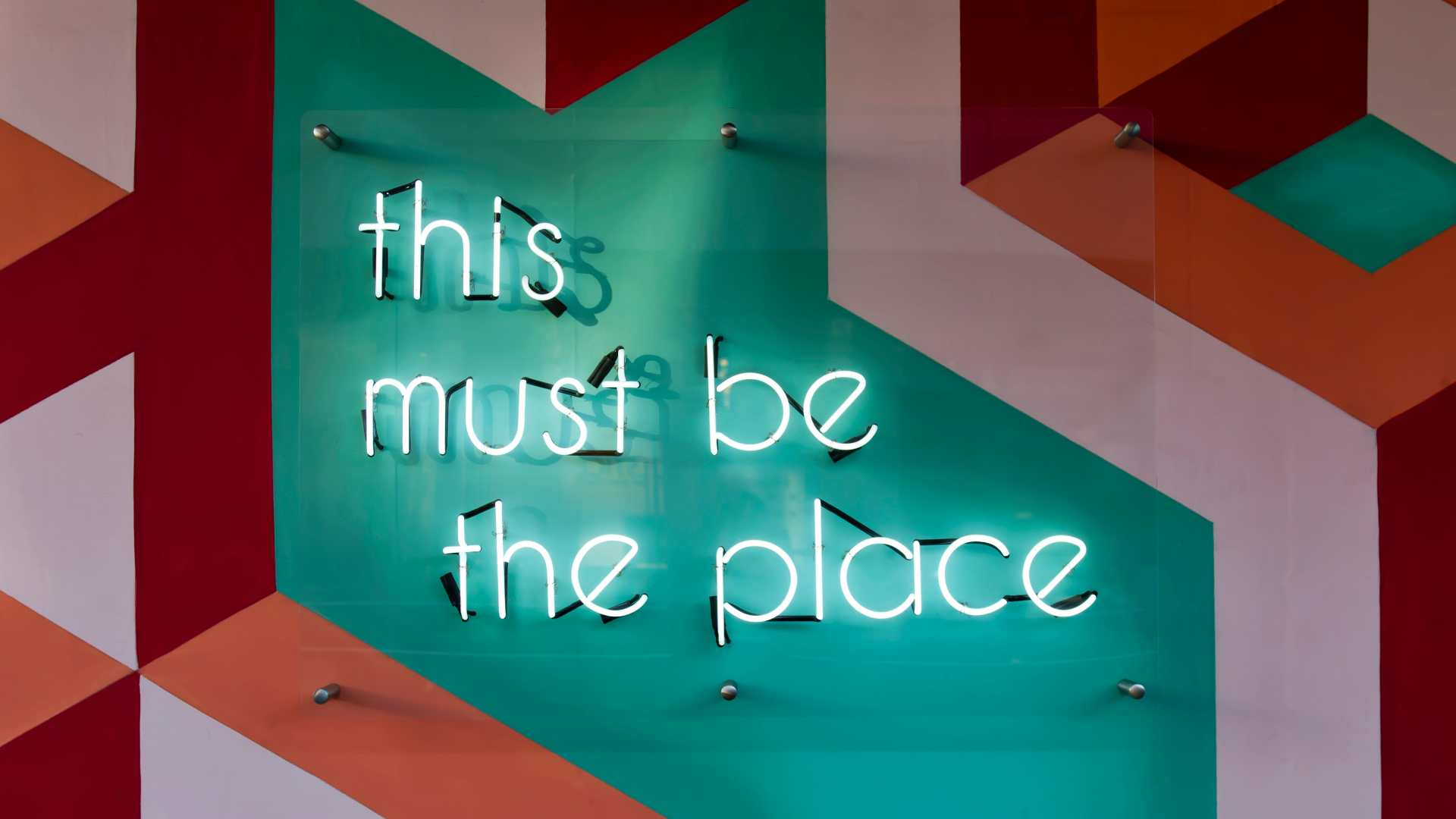 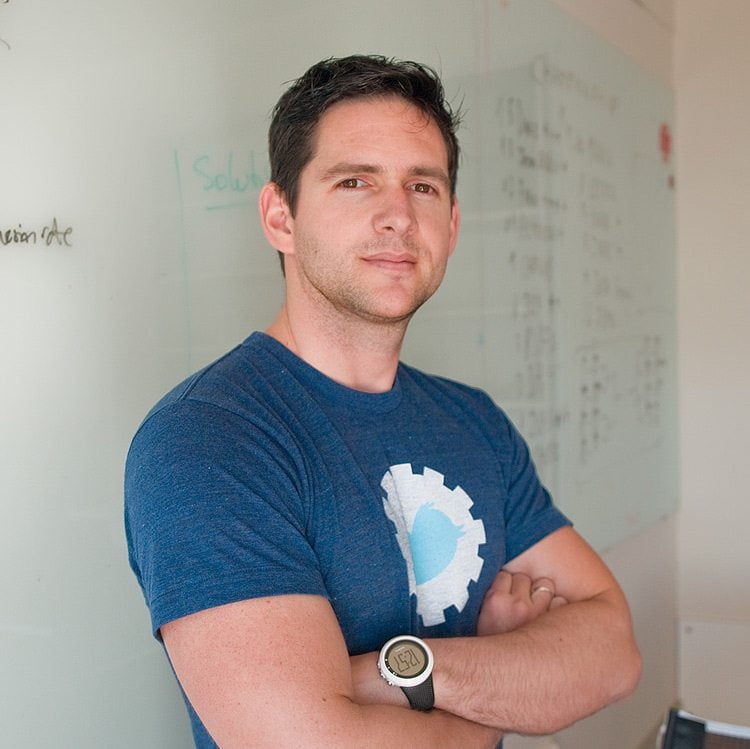 A few months ago we needed to hire for one of those developer roles that are hard to fill. For this, we put a lot of effort in as a team to write a job offer that resonated among the kind of candidates we were looking for, and which answered most of the doubts that people usually have when looking for a new project to move into. We also tried to be as transparent as possible about our way of working, the state of the project and the current level of the team, to avoid people applying with false expectations and wasting time on both sides.

What were we looking for?

We were looking for “software crafters” with experience applying certain architecture patterns and extreme programming practices. Normally, nobody describes themselves that way on LinkedIn, on employment platforms or on Twitter, but people usually list their level of experience with certain technologies or just simply what companies they have formerly worked for.

We ran an organic campaign...

With the offer published on our website, we launched a couple of organic tweets with a very personal touch. The most successful tweet, from my personal account @aartiles, said: "This is the most honest offer I have written in my career. I have tried to make it a faithful reflection of how we work and think here at @AudienseDev. If most of what it says sounds good to you, I'm looking forward to meeting you. My DMs are open."

The reception to the tweet exceeded all expectations, but although there was a lot of interaction with the tweet and applications began to arrive, the quality of those was not as desired. So we decided to do an advertising campaign for a very specific audience.

And so we developed our paid campaign

Since the target audience was difficult to categorize, we had to resort to an advanced audience segmentation strategy, based not on how the developers (our target audience in this case) describe themselves, but who their people to look up to are.

To build the audience, we started by analyzing the Twitter account of @CodelyTV. Codely.TV is a training platform, offering subjects that are very aligned with the offer we had published. Within its community, we identified a segment of “software crafters” that combined just what we were looking for, the knowledge taught in Codely.TV and the mentality and practices inherent in the “craftsmanship software” movement. 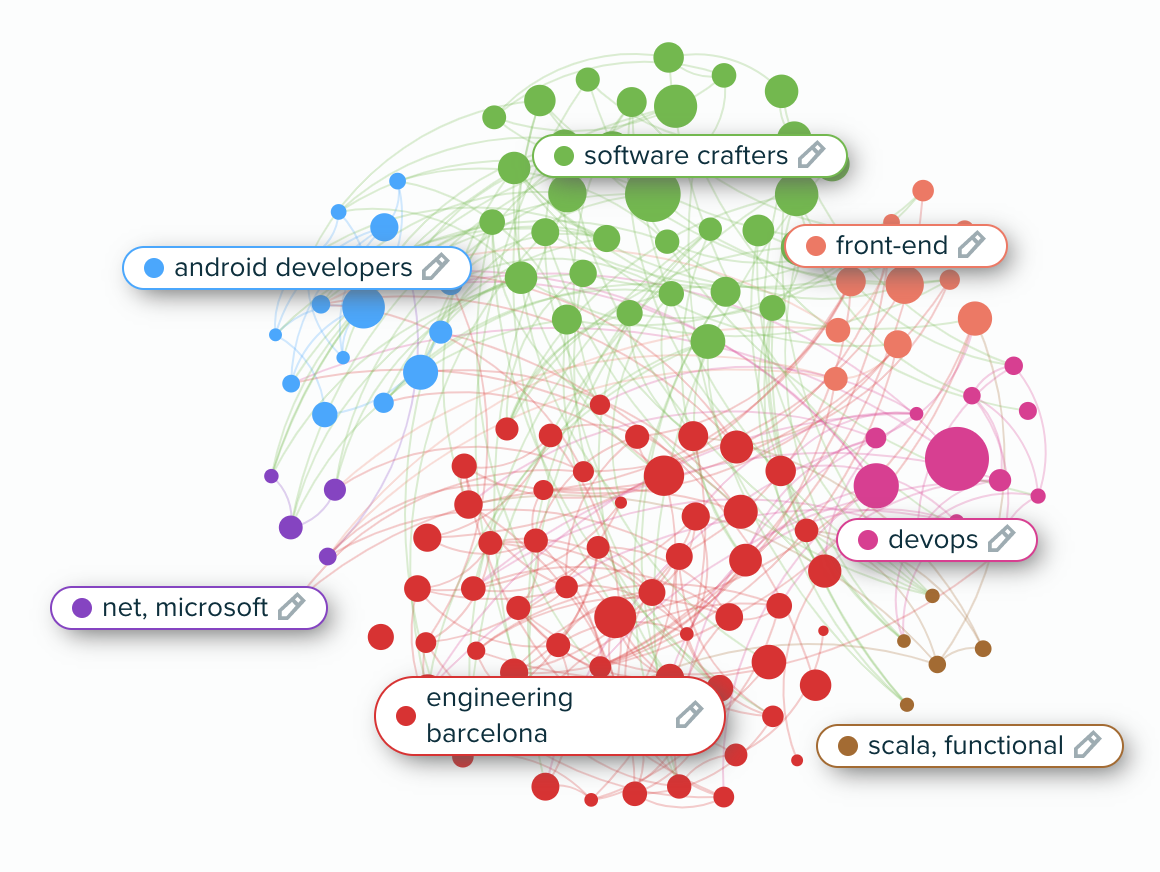 The @CodelyTV community does not exceed 3000 followers and, within it, the segment of "software crafters" consisted of about 500 engineers, so we needed more potential candidates.

The influencers are also candidates

When analyzing the influencers for this segment, sorting by affinity we found key people of interest from the Spanish development community, like David Bonilla. While we do not doubt that Bonilla is a software crafter at heart, not all of his 15.5K followers are likely to be, since he has a more generalist reach.

When ordering by our uniqueness algorithm, we found other infliencers that despite not being as “famous” (with audiences of about 1000 followers on average) had a large percentage of the segment that we were interested in also have an affinity with them. 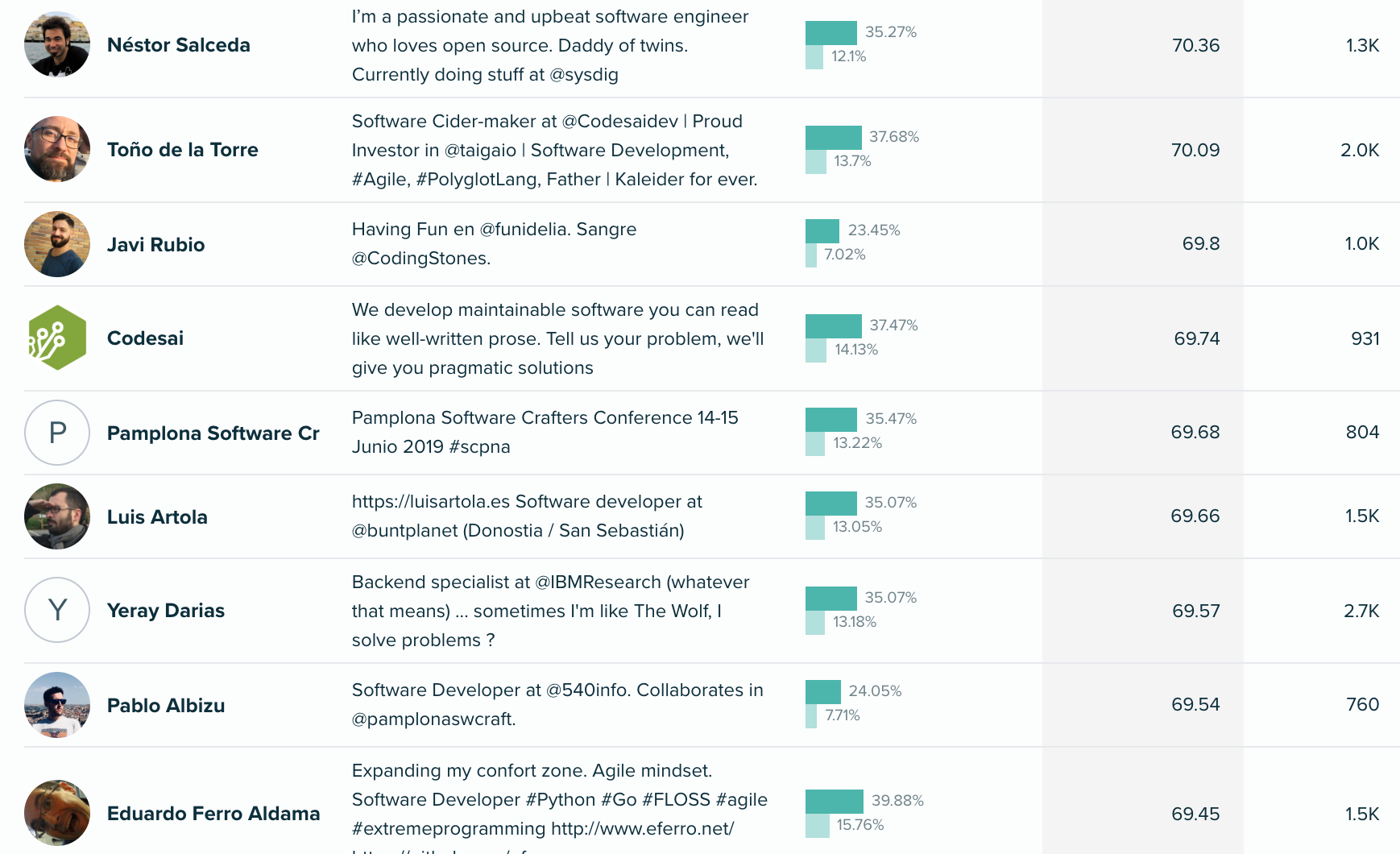 Browsing among the most unique influencers, within the top 150, we saw that they were people who had the same characteristics:

For example, Pablo Albizu, with just 760 followers, only 7.71% of the @CodelyTV community follow him but 24% of the Software Crafters segment follow him.

These influencers were definitely going to be part of the target audience for our campaign, for several reasons:

So we added these 150 candidates to the 500 we already had and created our first audience.

Enlarging the target audience through influencers

650 candidates is a very small audience, considering it is normal that not everyone is active on Twitter and many fewer will be considering a change of job.

The expansion strategy we developed consisted of looking for more people outside of the original audience who follow at least some of these influencers.

For this we used our Audience Manager and built an audience that met the following criteria:

Then we did a manual elimination in batches depending on certain patterns that we discovered to not fit the job offer.

With all of this, we built another audience of about 12,000 potential candidates.

Thanks to our integration, we synchronized these to Twitter Ads using the audience manager, and created a campaign aimed only at those two audiences that we had curated so carefully beforehand.

We created a campaign with the “Awareness” objective and by paying the maximum bid. 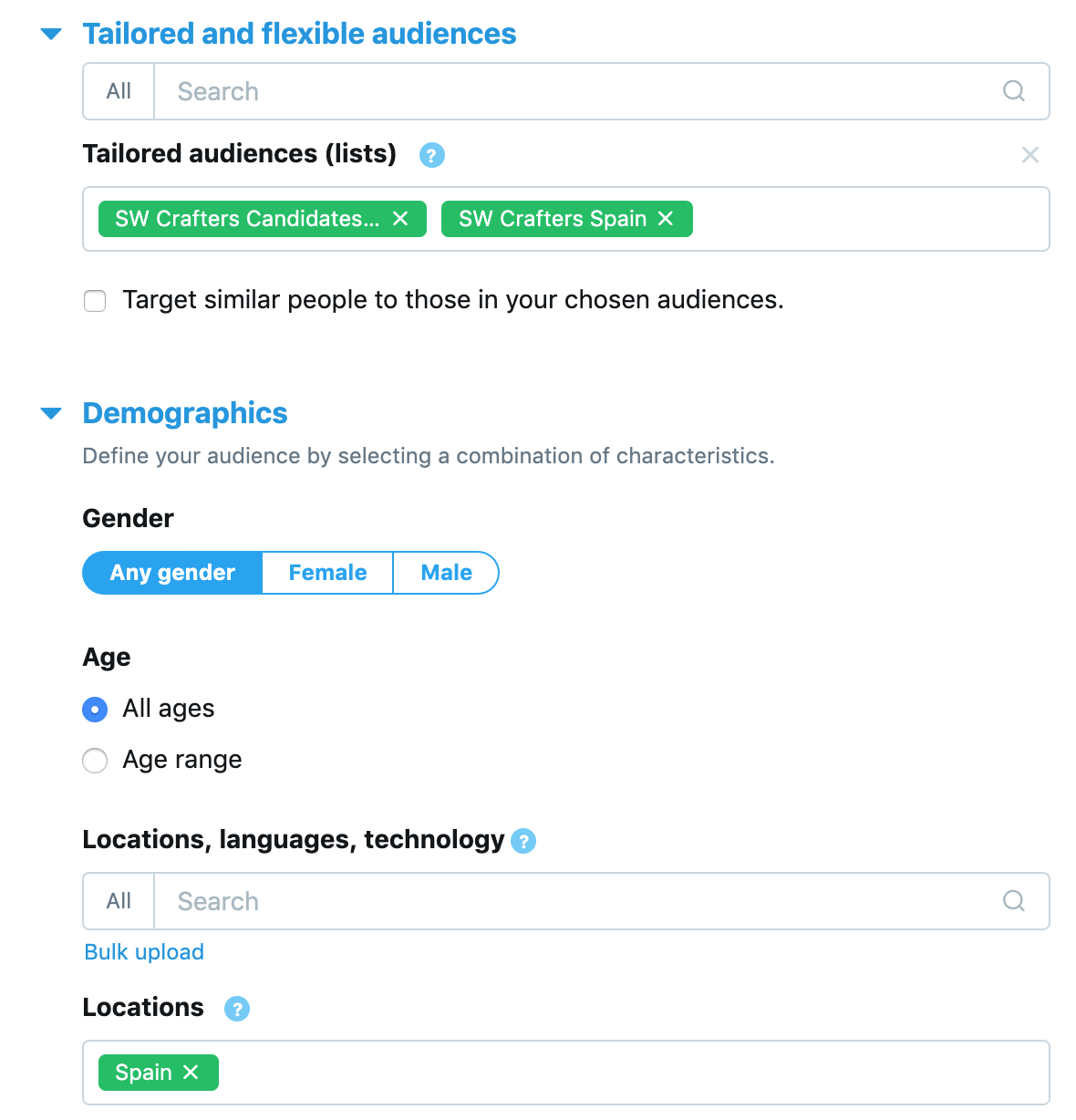 The ROI of our recruitment campaign

Although the level of engagement and impressions was lower than with the organic tweet, the quality of the leads was much greater.

In Spain, the usual fee to run a selection process for a profile like the one we were looking for is between €8,000 and €10,000. In this campaign, we spent about 3 days of preparation and just $100 on Twitter Ads, which has meant roughly a 99% saving. To give a concrete example: it cost us only $5.50 (see image below) to put the job offer announcement in front of the eyes of the 150 influencers mentioned above, which are potentially more unattainable by other methods.

The other great cost that is usually attributed to recruitment is the time spent by the team in the process. Having refined so much with targeting, we save a lot of time by not interviewing profiles that are not relevant and 46% of the candidates we processed are eligible for future opportunities. 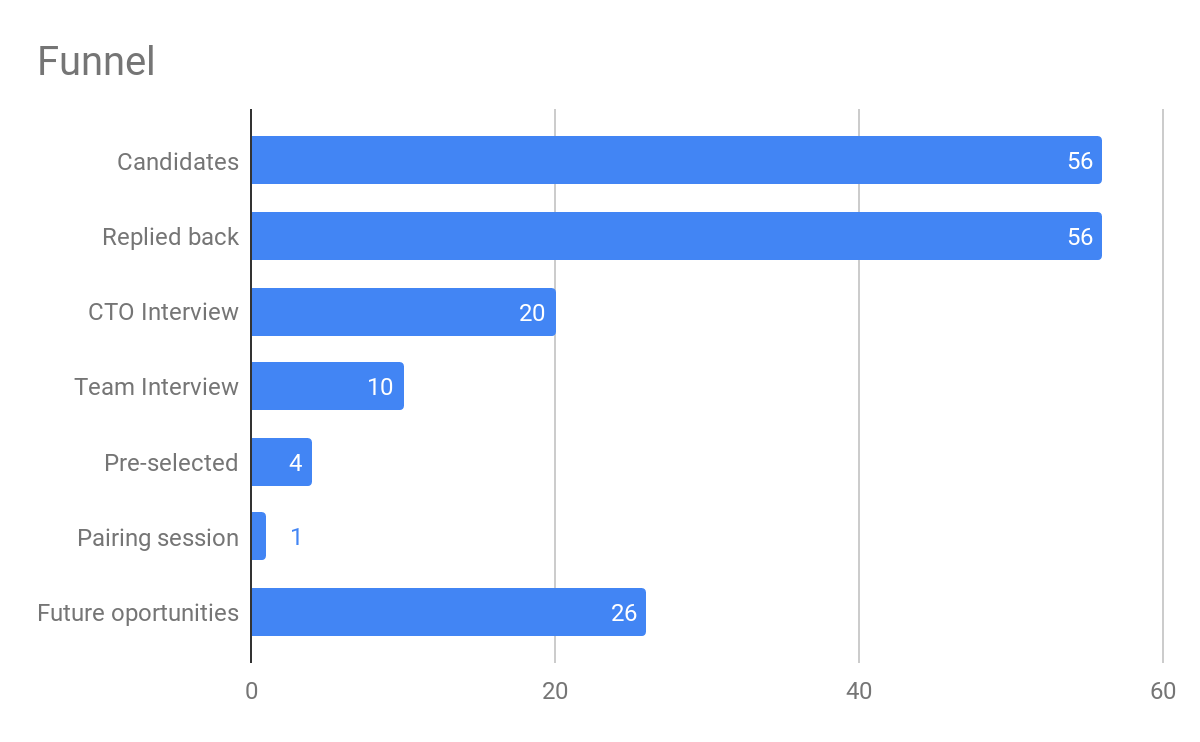 Validating the results of our campaign

The week after our campaign we attended the Pamplona Software Crafters Conference, where most of the influencers we used as a “seed” of this campaign also attended and they had the opportunity to ask in person the impact generated by our ads campaign.

In general, the feedback we obtained was that:

Photo by Tim Mossholder on Unsplash.