The pros & cons of having your CEO on Twitter 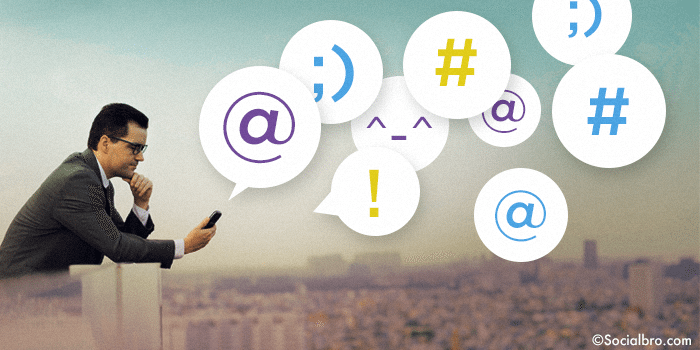 As a company who makes a Twitter analytics and marketing platform, it was a no-brainer for us to have Javier, our CEO, on Twitter! But what reaps rewards for one company may be a fruitless exercise for another… Less than a third of the CEOs for the top 500 grossing companies in America are on Social Media and only 5.6% on Twitter. But CEOs such as Bill Gates, Richard Branson, and Arianna Huffington are vocally supportive of Twitter and make an effort to tweet regularly.

So, why does it work for some companies but not others? You may not know if you should have your CEO on Twitter or not, but you know it’s something you need to consider. Every company has its own unique position to consider, so here are some top reasons for your CEO to stay grounded or join the flock:

We’d rather take Daniel Craig out to dinner than his PR rep (no offence to any wonderful PR reps out there). In a similar vein, a response of some sort (even just a favourite) from a real-life powerful human will mean a lot more to someone than an anonymous response from the brand. It’s all well and good having a company Twitter page pushing your message out, but 77% of people are more likely to buy from a brand if their values are defined from their CEO actively participating on Twitter.

Con: Their Average Salary Is Huge, Easy To Look Disconnected

On the flipside, the average US CEO receives an annual salary of $740,000. The median household income is significantly less than a tenth of that. A CEO earnestly trying to show their personal side, such as displaying their passion for diamond statues of themselves, might accidentally seem out of touch. The 2014 Endelman Trust Barometer states that trust levels for a CEO are only 42% and attribute this to “a much greater degree of trust [being] afforded to those... with similar perspective”. The classic trap of not knowing the price of a loaf of bread has caught out many politicians, could it catch out your CEO too? It’s not something many people would have sympathy with...

A CEO has to represent the company, as a result they can’t spend their whole time locked away in an office. In fact, 25% of their time is at public events and 83% of their time is spent with other people. They’ll be used to engaging with others and will hopefully have a bank of amusing anecdotes ready to roll out at a moments notice. An experienced CEO should already be an expert at giving good impressions of themselves and their company. many of those traits such the ability to listen, to communicate, and to put their best foot forward are all valuable social media skills.

Con: The Ego Has Landed

Let’s be honest, most CEOs don’t reach their post by being delicate little wallflowers, a level of confidence is mandatory. But if they’re not careful it can turn into brashness, which can switch people off. Combine this with a direct platform to millions of people and some will take a giant dive into a deep pool of ugly narcissism.

Living in a boardroom bubble can distort your perception, sometimes you need a dose of reality. In a blog back in 2012, Richard Branson championed the use of Social Media for companies and cited a mix of beneficial reasons and examples. One of the first points he brought up was that “through customers’ comments, we started learning about issues with our products and services more quickly than ever before.” A socially engaged CEO can hear directly from the streets how their product is performing or how their brand is viewed.

How to you drive change? Give feedback, and listen to your customers http://t.co/G2tFpBqFF4 pic.twitter.com/xWOGZnPS6d

Some of a CEO’s better personality traits can translate exceptionally well for Twitter. Creativity is viewed as the most important leadership quality by 60% of CEOs, which means they can look at things from angles others can’t. A unique view on an issue (or even just a well-chosen reaction GIF) can be a big talking point on Twitter, and you can be at the centre of it. Twitter also sees content about business and finance shared at a level 67% higher than average on social media, meaning there’s an audience out there who are more receptive to any lessons they have to impart about their job.

84.7% of people believe that CEOs on Social Media can build better connections with employees. Let’s say your CEO has avoided the social media revolution over the last 15 years and wouldn’t know a Snapchat from a snapback. He or she has decided it’s time to join the party, but has no idea how to start. This is a perfect opportunity for them to engage with tech-savvy junior employees and learn how to use the networks properly, ideally benefitting both employees. This flexible approach to mentoring has been has been adopted by companies such as GE, Hewlett Packard and Cisco.

In the minds of the public your CEO will be inextricably linked to the company. If they’re supporting a popular cause or charity then this could be great. If they stride boldly into a red hot controversial issue then don’t be surprised when their big mouth makes a big dent in your public perception. Chick-Fil-A CEO Dan Cathy has been a vocal opponent of gay marriage, a stance which received a substantial backlash. Their YouGov BrandIndex score dropped from a healthy 65 to a below average 39 in the wake of his initial comments.

Pro: You Have Better Control Over The Conversation

When your brand does something, people will talk about it online whether you like it or not. Jacqueline Gold, CEO of Anne Summers, recently spoke of how “Twitter is the new garden fence, so it is better to be in control of that and have your say.” This applies to drip-feeding daily doses of your brand’s message to your followers, but it also means you can help to turn the tide in your favour if something bad happens. This can be important as 64% of folks believe that a brand’s CEO being on Twitter improved their transparency. Path used this to their advantage in 2012, when it was revealed they had been downloading peoples’ phone contacts. CEO Dave Morin was praised for actively engaging with concerned users on Twitter.

Pro: They stick around

Your CEO probably fought hard to get that role, so they tend not to abandon it too quickly. CEOs stay in their post for an average of 7.6 years, whereas the average worker only stays at a company for 4.6 years. Huffington Post post did a rundown of the Top 50 CEOs on Twitter last year, 45 are still at the same company now and none of the ones who left appeared to go to a direct competitor. This continuity can be a major asset if they build up a following over a prolonged period of time.

Con: They’re high profile if they do leave

Okay, so what if the romance turns sour? There are some stupendously high follower counts in the Huffington Post list above, and the median average was just over 90,000. That’s a community that many companies would invest serious money into cultivating. The CEO presumably got a sizeable following based on their association with your company. When they go they’re taking those people with them on a journey that could be away from you.

Let’s say your CEO does something great, finds something interesting, or generally acts like a nice person. They get Twitter, they get online communities, and they can unlock their potential. Well, their natural curiosity, generosity or likeability will make them a great asset to the Twitter community, who will hopefully respond by sharing your CEOs insights with all of their followers and send your brand’s reach off into the stars.

So, we came up with more pros than cons. It seems we’re in the majority as 81% of people believe that CEOs on Twitter are better equipped to lead their company in the modern world. If your CEO is definitely not suited to Twitter then you could always get someone to tweet for them. 83% of blogging CEOs used a ghost blogger of some sort, so we won’t tell if you decide to ;-)

If you’re looking for some CEOs on Twitter to model yours on, here’s five we think you should check out:

@RichardBranson - The Virgin CEO just gets it, and has a lot to teach about life and business.

@ElonMusk - If something cool is happening in the future, Elon Musk will probably be involved. A co-founder of Tesla, SpaceX and PayPal, he’s a man with fingers in many exciting pies.

@PeteCashmore - The Mashable CEO will always have a fascinating piece to share with you.

@AriannaHuff The Huffington Post creator is a prolific Tweeter, interspersing content with her life in a manner that feels natural.

@JavierBuron - Did we mention that our CEO was on Twitter? He is, and regularly shares highly useful chunks of Social Media wisdom.

Is your CEO on Twitter or not, and why? We’d love to hear from you.