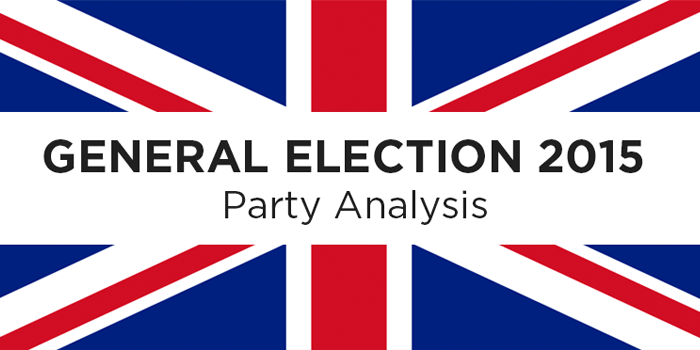 Hitting the campaign trail strong, party leaders from around the UK have been building up their social media communication strategies in an effort to win over the last few fence sitters. Twitter, with its 15 million users in the UK, has played a key role in this year’s election debate with UK citizens taking to the platform to air their opinions on policies, on parties, and on their leaders. With viral hashtags ie. #Milifandom and official hashtags around key televised debates, such as #LeadersDebate, #BattleForNumber10 and #BBCdebate, Twitter can help paint a picture of which way the election may sway. As we enter the final countdown to decide who will govern Britain for the next five years we analysed the different parties Twitter accounts and how they have leveraged the communication platform to connect with the UK public.

The General Election debate has been as aggressive online as it has been offline. With #GE2015 used over 862,440 times from April 1st to the 24th, an average of 1,440 Tweets per hour, peaking around televised debates and the releases of the different manifestos; Labour’s manifesto was the most talked about on Twitter with 4,600 Tweets, the Conservatives lagged behind with 3,780 Tweets. It’s evident that both the Conservative and Labour parties recognise the importance of Twitter in the lead up to the election, with an increase in Twitter activity from both accounts by over 20% since the beginning of 2015.

Of the general election debate Labour claimed a 28% share of the discussion with over 84,000 Tweets, while Tories fell short by 20% with 67,900 Tweets.

The share of voice data also provides interesting insight into the relative influence of the smaller parties. Although SNP have the smallest Twitter audience when compared to other parties their share of the conversation is higher than Liberal Democrats and The Green Party. Interestingly, all four smaller parties received a higher positive reception than majority parties Labour and Conservative.

By examining the gender breakdown, the Twiter data shows that the online debate is predominantly male - over 66% of the total audience. Interestingly over 35% of Labour’s audience identify as female, compared with Conservative’s 29% and UKIP’s 22% - perhaps influenced by Harriet Harman’s Woman to Woman pink bus campaign?

While all parties generally received a positive result, with a positive sentiment of 62% Labour are high in the election stakes on Twitter. Conservative’s were the only party to dip below 50% in overall positivity, with 54% of Tweets plagued with negative sentiment.

Individual MPs are doing a lot to influence the Twitter conversation. Comparing Labour and the Conservatives’ principal accounts, Labour has 28% share of voice and a Twitter audience 26% larger than Tories who hold 22% share of voice and an audience of 151,200 users. However, factoring in the party leaders flips that back, with David Cameron’s nearly million strong Twitter following outmuscling Ed Miliband who has less than half of that. On the other hand, Labour has strength in numbers, with 11 MPs listed in SocialBro’s ‘Top 20 Members of Parliament on Twitter Ranked By Followers’ list and those party members are leveraging Twitter for support.

Although the new government will not be confirmed until after the 7th of May, the above data outlines a competitive environment. The infographic below provides more information on the comparative analysis of the #GE2015 landscape according to Twitter data, and The Top 20 Members Of Parliament On Twitter.

How Twitter Can Help A Party Win The Election!

With all parties actively leveraging Twitter in the fight to win the 2015 election, how they use the platform in these final days could be crucial to the success of their campaign. The Twitter data provides actionable intelligence that each political party can use in a final push to win over voters. Here are some Twitter marketing strategies that can help your party to reach more voters in the final countdown and in future elections.

Brands are constantly striving to build their employees and customers into brand advocates. With each member of parliament aligned to a specific party, who better to advocate for you than your party members? Encouraging your party members to Tweet support or relevant policy views will get your message out to an audience wider than just your official party accounts.

Since the beginning of the year we have seen this strategy from both the Labour and Conservative Twitter accounts. Looking at the infographic you can see the difference in political party followers changes dramatically when the party leaders audience is also taken into account, with Conservative’s audience increasing by 87% when David Cameron’s followers are added. By mentioning and/or tagging the party leader in Tweets each party can attempt to tap into the additional audience members that may be following the party leader and not political party account, and vice versa.

Combine SocialBro’s segmentation tools with Twitter Ads to build and deliver relevant promotional messages from your political campaign to a highly targeted audience. This optimises your spending by ensuring your Promoted Tweets are only seen by an audience segment that you think the messages are most likely to appeal to.

For example, although it started as a fun fan hashtag Labour can use the audience Tweeting #Milifandom to tap into the younger generation, then filtering by age to ensure no underage user is targeted and run a campaign that appeals specifically to those users highlighting what benefits they plan to offer that age group ie. decreasing student fees.

In the final days before the election, reiterate the key points of proposed policy by building different campaigns based on these issues. People are not shy about Tweeting their opinions on political matters, which can help you communicate with them about specific issues they care about. Set up multiple campaigns on Twitter to target people who have Tweeted about a specific issue, making sure that your message is more likely to be one that resonates with them.

Use a Mail Integration Tool SocialBro Twitter to find people on your party’s email database who have a Twitter account associated with that email. This retargeting opportunity will help you to spread messages among your supporters and amplify key points to those who may have missed the original email. You can then run national campaigns for them, or segment them locally, put them into a Tailored Audience list, and then run campaigns for them from their local candidate’s account.

About the data:The analysis of Twitter data was carried out by SocialBro.com. The Twitter Audience data was collected from the @Conservatives, @UKLabour, @theSNP, @LibDems, @UKIP & @TheGreenParty accounts from SocialBro.com. The account analysis timeframe: from 01/01/2015 until 28/04/2015. The additional data was based on a 10% sample monitoring of #GE2015 from 01/04/2015 - 24/04/2015. The stats provided compare mentions of keywords related to each party.

Previous Story
← [Interview] How The UN Uses Twitter To Bring The World Together One Tweet At A Time
Next Story
Snickers Sticker NYC With #HungryMistakes, #MayThe4thBeWithYou & Tweet For London Pride →