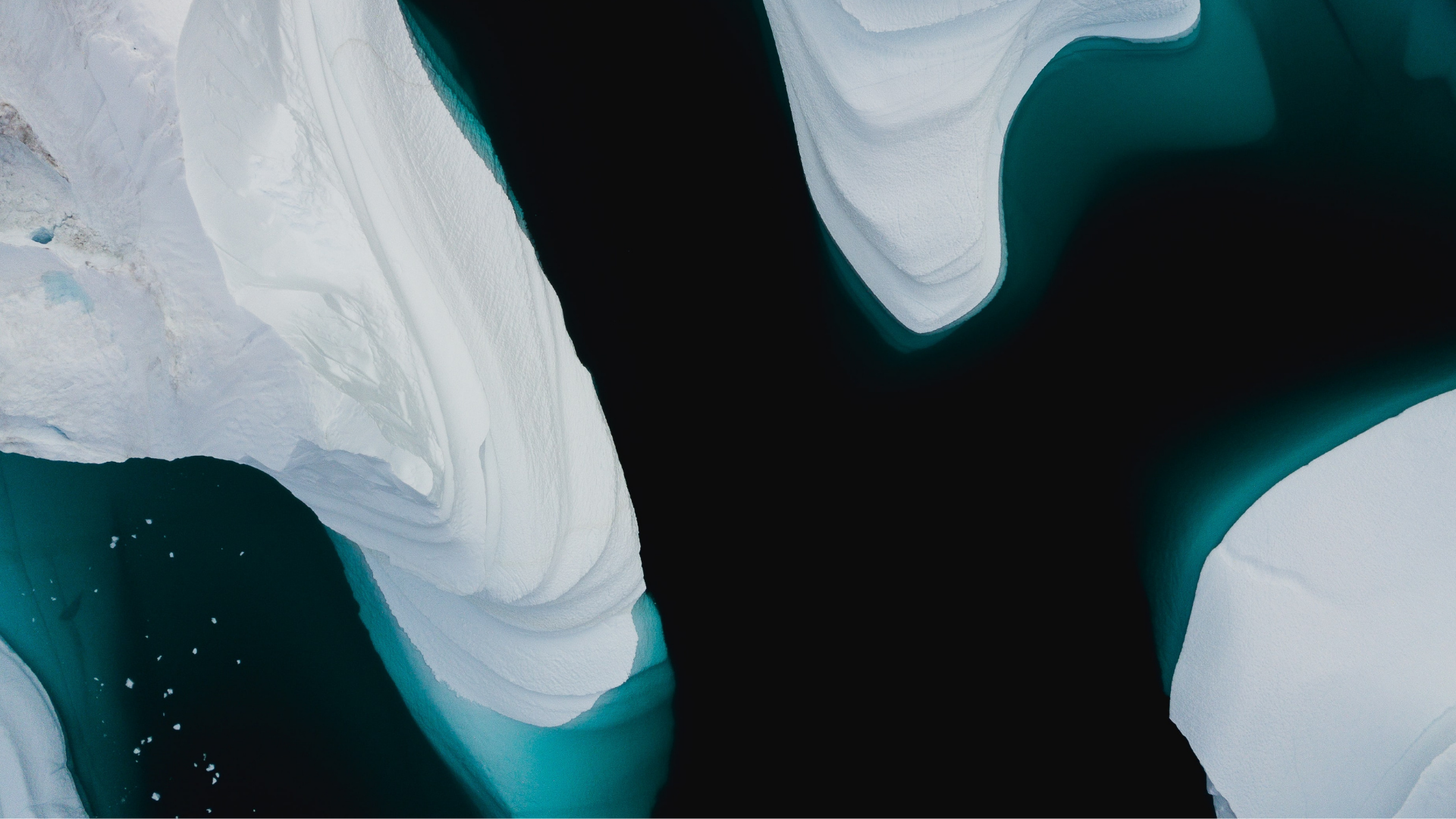 The Climate Crisis: An Audiense (+ others) Analysis 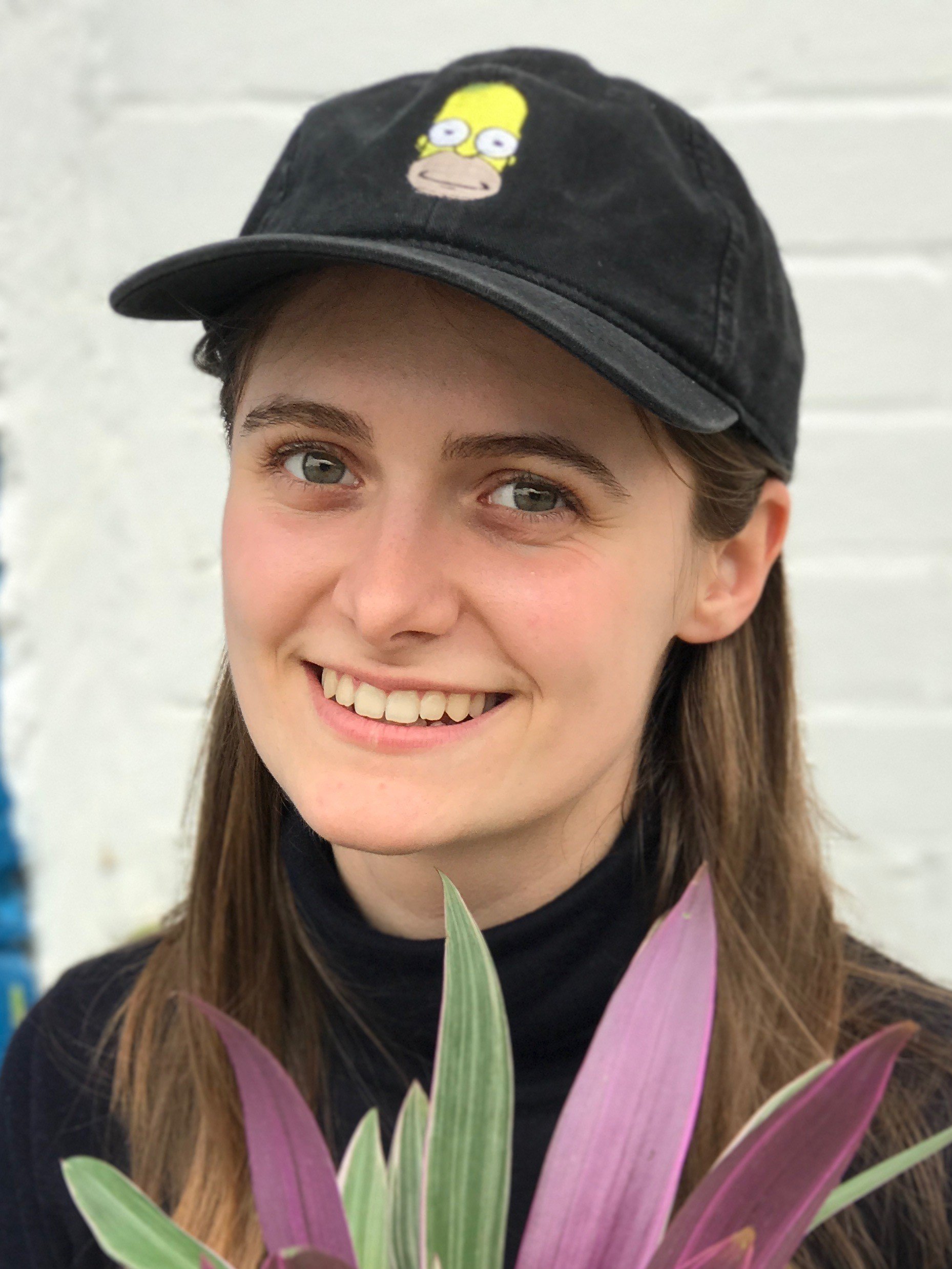 The pandemic virus of 2020 has taken centre stage, but the climate crisis will continue to bubble away and worsen if left unresolved. In the run up to the US elections in November 2020, Democratic party candidate Joe Biden has announced his stance on the US green energy revolution, promising net-zero emissions by 2050, amongst other decarbonising and pro-electric initiatives.

The conversation surrounding the climate crisis topic will be our focus here. At Audiense, we chose to examine both the conversation, and in particular, those behind it and driving it, following this flow:

Identify the conversation via keyword search (in Meltwater)

The objective was to find the key climate-change audience, essentially the people at the core of the movement. To be able to find those who were actively initiating and engaging with content, we started by defining the audience through top conversation keywords. We defined this as including climate change, climate crisis, sustainability, sustainable, recycle, and recycling, specifically used in the United States.

We input them into Meltwater’s ‘Explore’ area to validate the chosen keywords, and to see other top trending keywords that are being used by this audience. The query was extremely large, and the daily average of mentions was reaching past 50K, so we limited our view to a recent, but short, time period. (12-19th August).

Segment the people behind the conversation into communities (in Audiense)

We took the audience from behind this conversation and imported them into Audiense to run a segmentation report on the 97K members. Look at what we discovered:

The political split between segments could have been expected, but the quantity of profiles with categorizable political biases was still a surprise. Ultimately, we wanted to understand the more focused climate-conscious audience, with less blatant political bias. Although politics plays a large part in this topic, it’s not the area we want to focus on right now.

We found segments with interests and engagement towards the Democratic, Republican, and Socialist parties, and even a more distinguished climate conscious segment. This report allowed us to view the communities of this broad conversation, and to begin to understand driving topic factors. We are able to uncover insights on each of the segments, including personality traits, hot content and topics, influential profiles and more.

Their bio-keywords are heavily topic related, and unique to the segment, with the community over-indexing to a baseline which falls empty in cases such as environment/al, energy, sustainability, and climate change. They also take to presenting their role/status in their bio, such as professor, student, scientist, writer, advocate, alum, business, director, and research, thus pertaining to an academic and passionate audience. This can also be seen reflected in a small over-index of their education level compared to the general audience baseline. 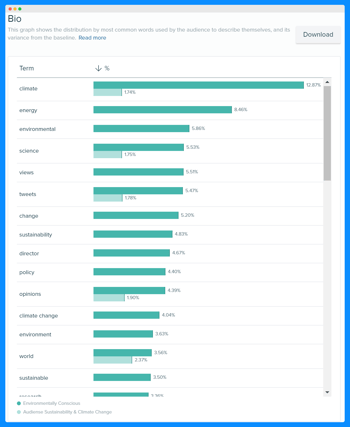 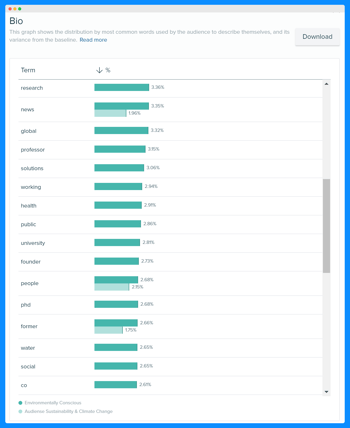 Looking at the profiles that influence this segment, the more unique and relevant ones include many green-orientated organisations and publications, with scientists and climate reporters such as Professor Katharine Hayhoe, Bill McKibben, Andrew Revkin, Michael E. Mann, Coral Davenport and Lisa Friedman. 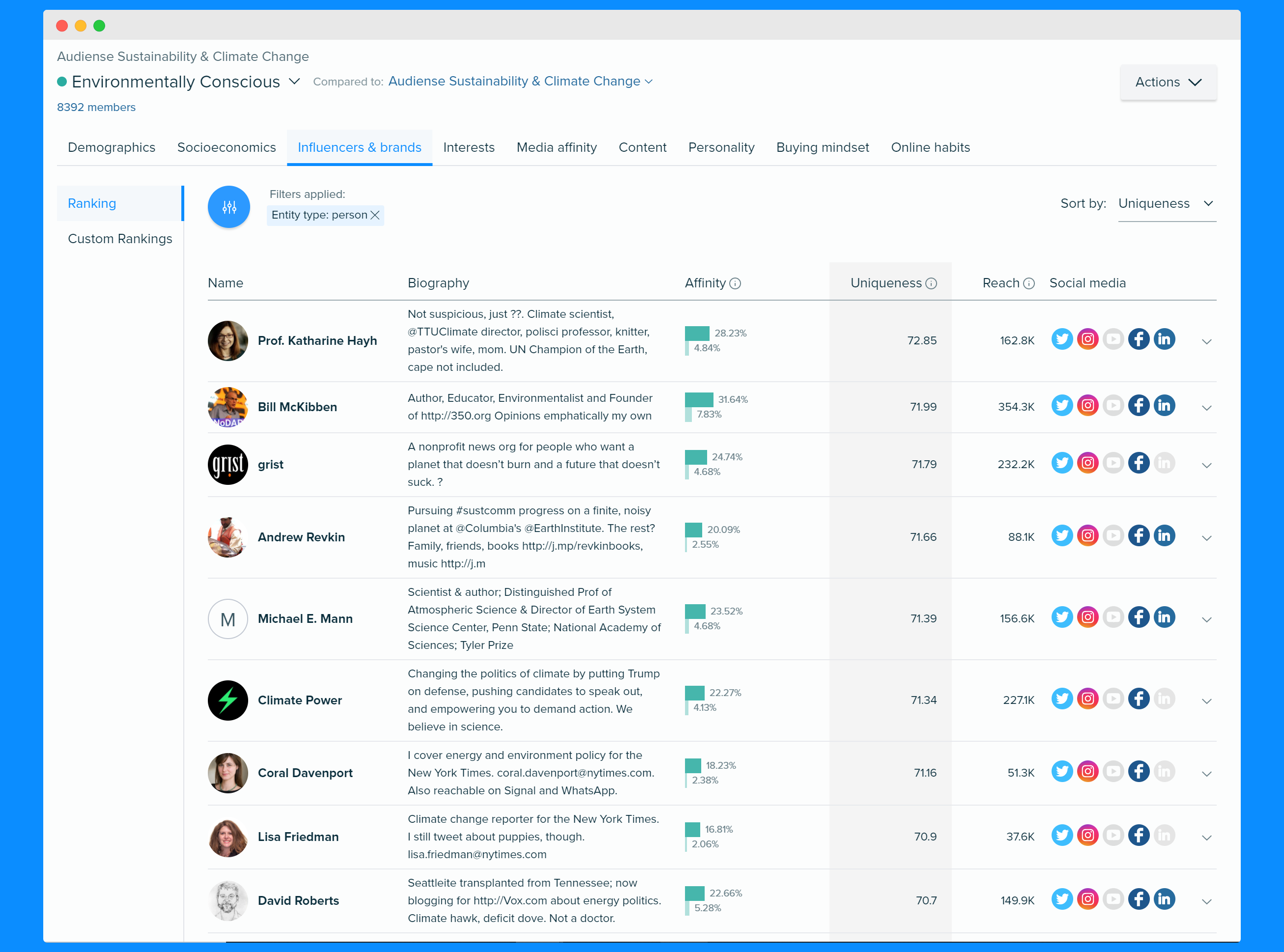 The interests of this audience reflect topics such as ecology, and energy in business and industrial, as well as medicine and disease. The top content resonating with this audience aligns to content shared by the top unique influencers, but still the politics seep in a little, and hashtags being engaged with include #DemCon #sustainability #energy #publichealth and #offshorewind. Their personalities are generally less neurotic (such as more confident and self-controlled), and more conscientious (more driven, persistent, self-assured), more adventurous, and trusting of others also. They’re 30% more likely to respond to campaigns, which could be a positive sign in rallying online or real-word activism.

To add to this analysis, our friends at Onalytica supplied us with a list of the top 500 authors in the environment and climate change topic. We were able to import this audience into Meltwater, and Audiense, and use them as a lens to compare their position with the general climate change conversation members, or even the environmentally conscious segment. This showed us how the scientists and professors continue to rank as most relevant to that segment, but the reporters and politicians are more relevant to the general climate change audience; thus, confirming the trend we had been seeing. 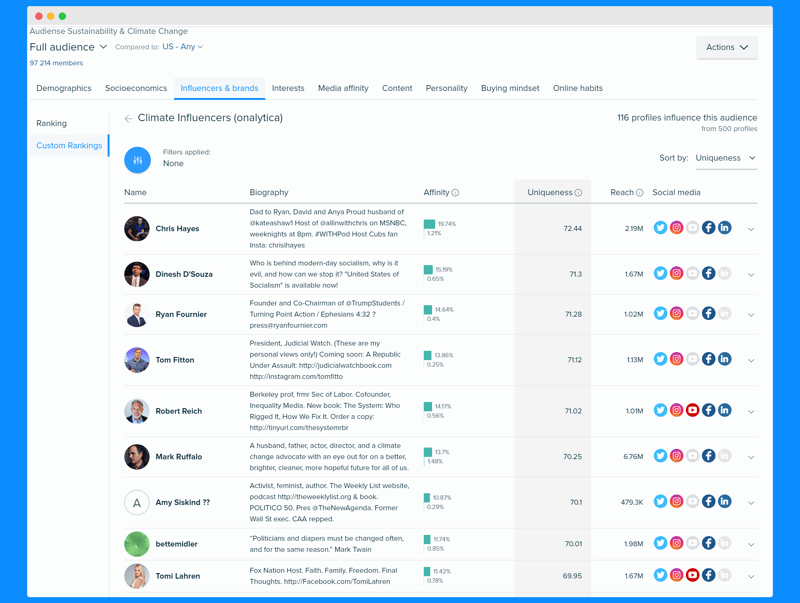 Compare the communities’ wordclouds (in Pulsar)

Our approach here has been to use social listening as a starting point to validate the conversation and to find a springboard from which to jump into deeper analysis. Then, we imported the entire audience into both Audiense and Pulsar. Audiense segments the audience, so that we can understand the conversations within their communities, whilst Pulsar’s integration with Audiense allows us to take a deeper look into the conversations at the community level. The analysis appears to show the environmentally conscious segment as having the environment and climate change at the forefront of its discussions, with this being their leading passion and number 1 cause to fight for, with factually driven arguments towards effective action more void of political bias. 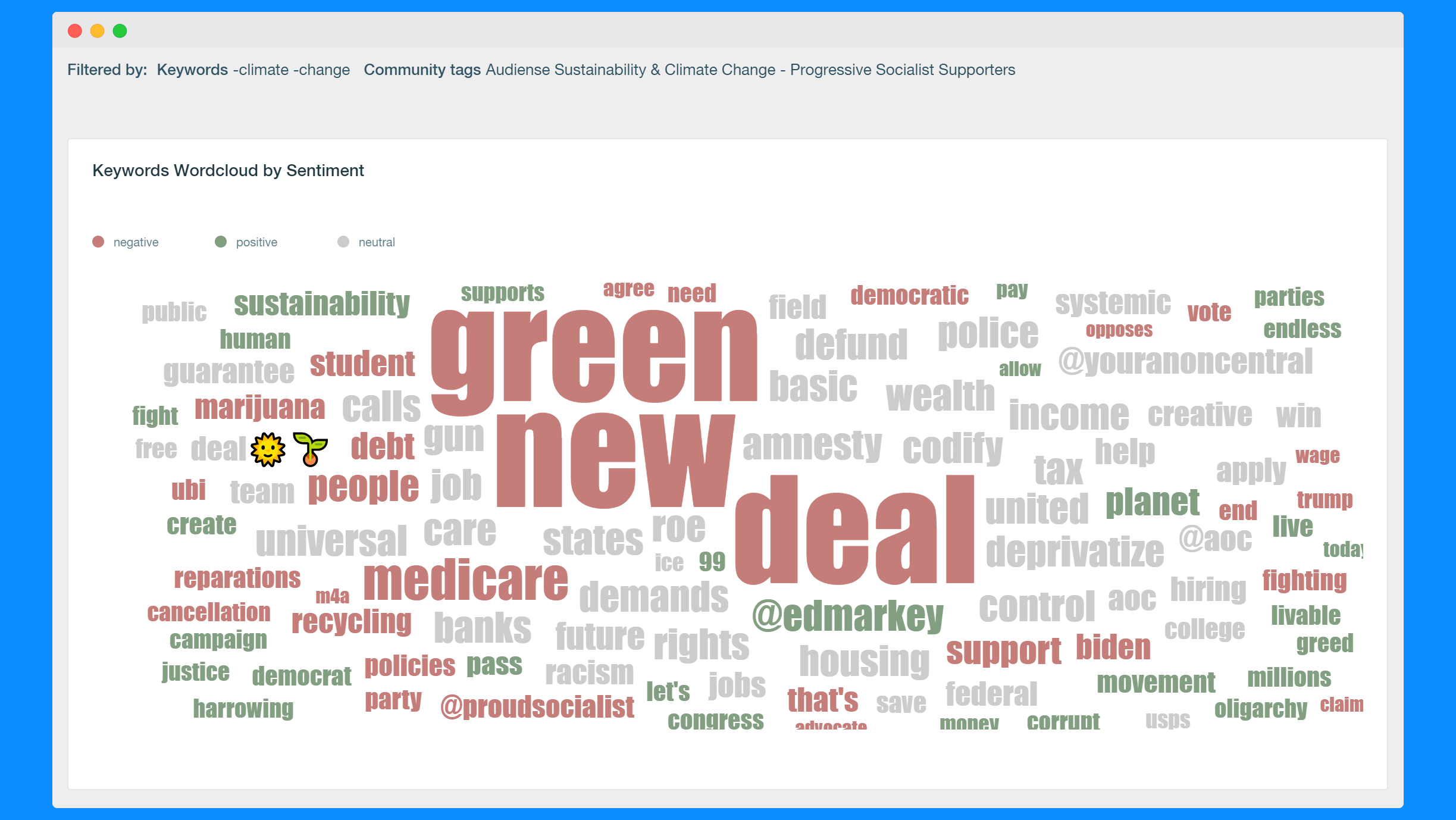 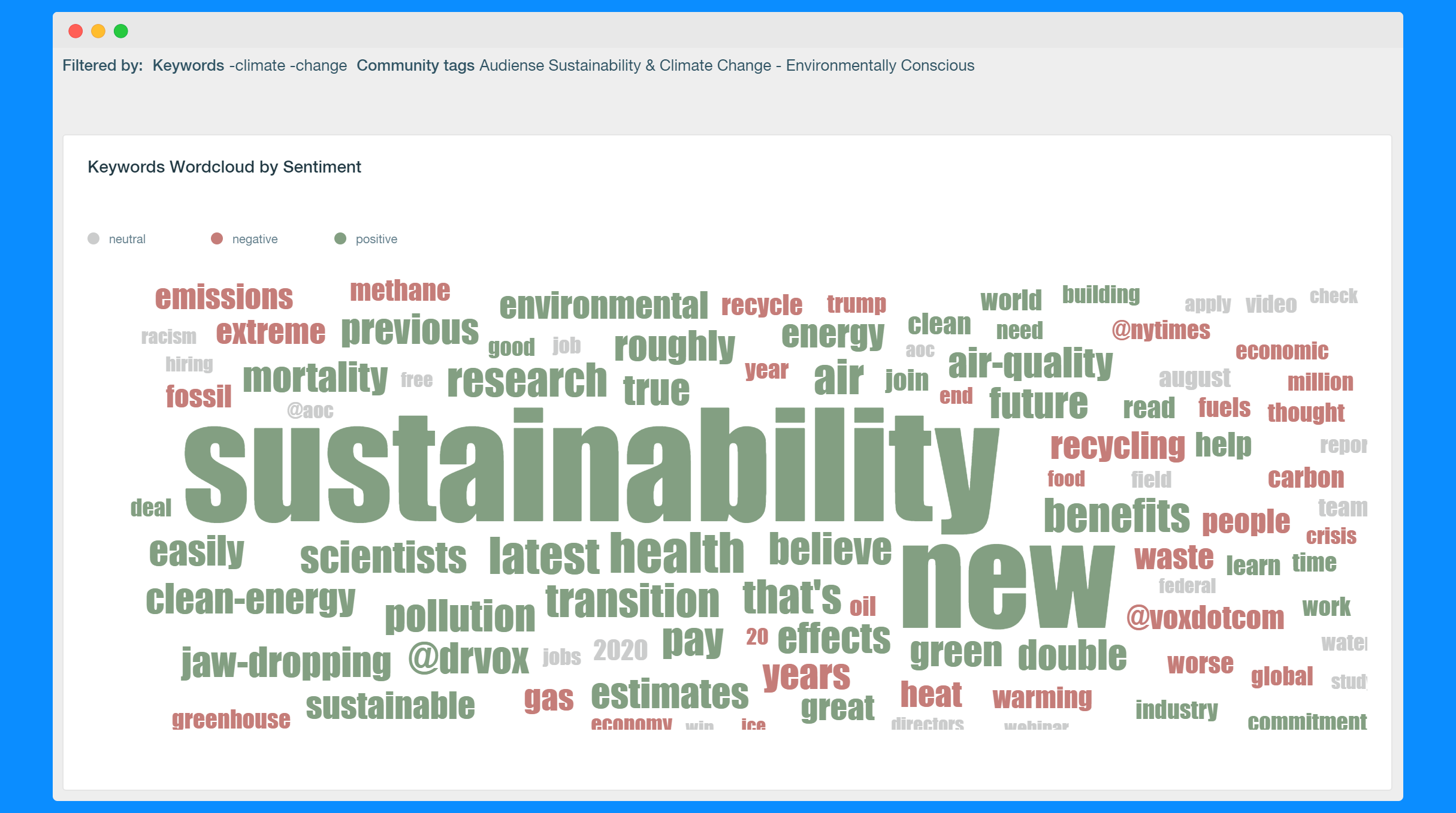 Resegment the key community (in Audiense)

Through Audiense' unique segmentation (segmenting through interaction/relationship) it allows us to cut away the noise, and analyse the people and conversation that we really care about. In this instance we are able to remove the democrat vs republican noise, and focus on the academics and activists that put the climate crisis above party politics.

This led us to running a new segmentation report on the environmentally conscious segment, which turned out to be pleasantly illuminating, allowing us to further distinguish communities from the homogenous group. 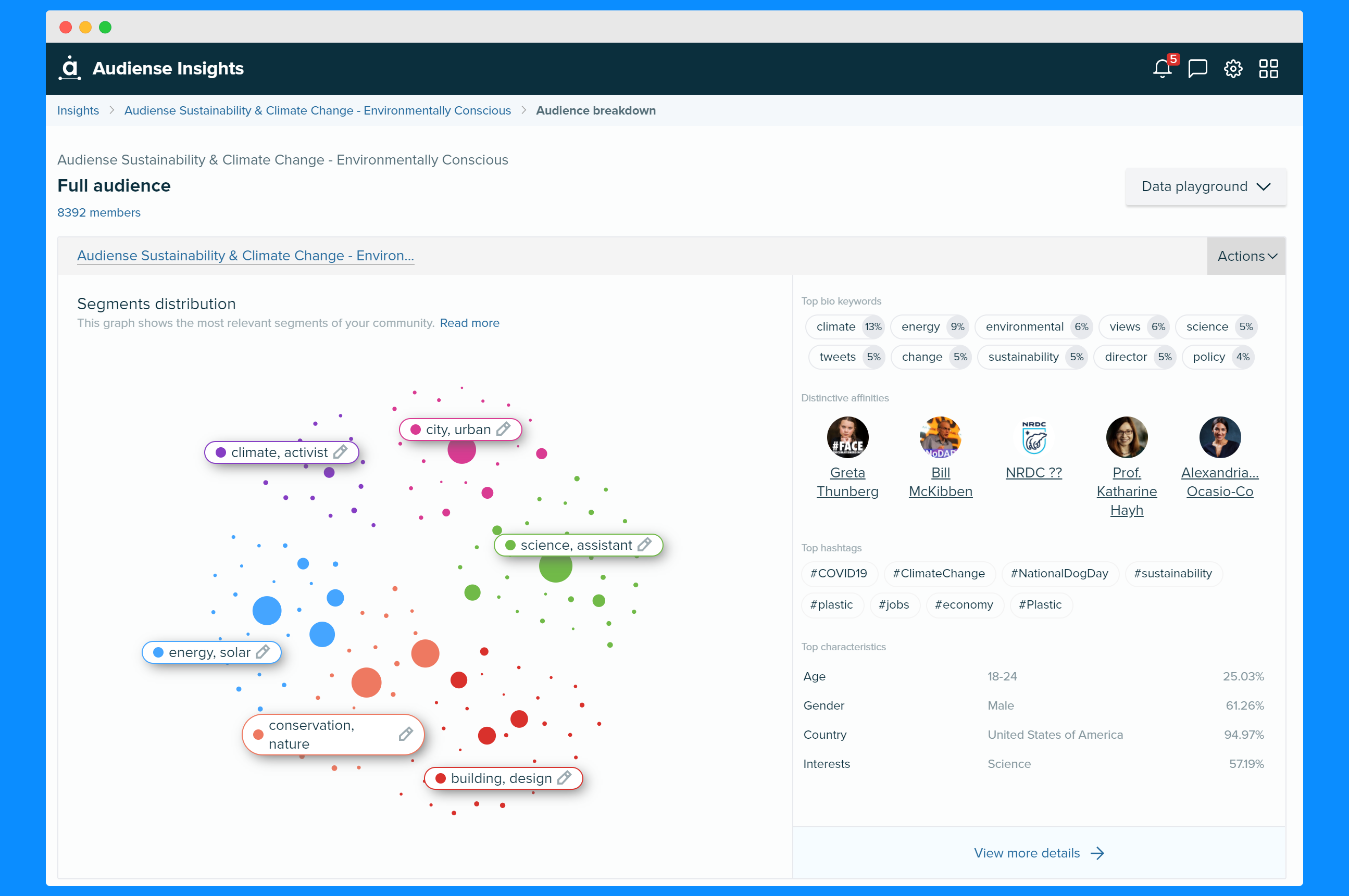 Here we can see communities suggesting urban planning and architecture (with an environmental focus), business concerning renewable and solar energy, scientists, conservationists, and activists. We could then choose to interact and engage with the audience members of these niche communities, or take our campaign to those that influence them. How we choose to act on these findings is the next step, but we can confidently state that we’ve found the hub of the climate change discussions in the United States.

Want to view the segmentation report we created at the start of this journey? You can explore it yourself here.

If you would like to see us explain some strategy and methods of engaging with these communities, let us know in the comments below!

Photo by Annie Spratt on Unsplash