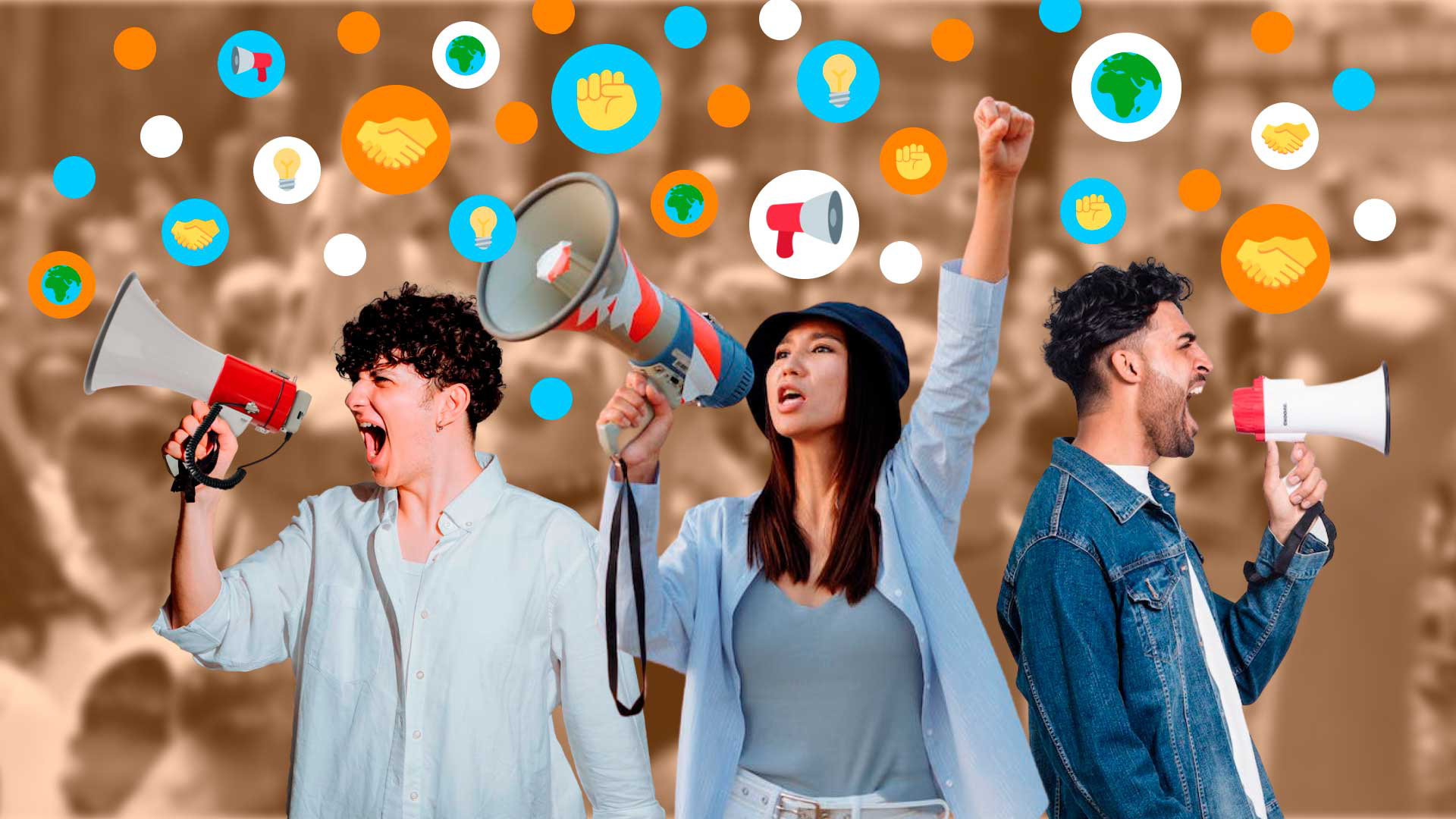 It's the season of giving! At this time of year, brands come out in force to show us their values in the form of a Christmas TV advertisement. For example, British retailer John Lewis used their 2022 Christmas TV spot to raise awareness for children in care, with an ad created in partnership with Action for Children and Who Cares? Scotland.

This Christmas, we’re dedicating our final 2022 spotlight blog to shine a light on brands with a purpose. While many brands put their focus on customer engagement, social activism is close to the hearts of many consumers, and brands that are able to deliver authentic, purposeful campaigns are more likely to enjoy customer relationships that last a lifetime. Here’s why having purpose matters for your brand:

Brand activism done well can be a game-changer for you and your customers. It can build awareness, provide a competitive advantage, and engage customers in a whole new way. In this blog, we’ll explore how Ben & Jerry’s, Patagonia and Peloton are using brand activism to build lifelong customer loyalty – and accelerate their growth.

There are dozens of good causes that brands can champion, from diversity and inclusion to climate change. To help us explore the opportunities for brand activism, we focused the scope of our research on gender activism, building an interconnectivity report based on a number of hashtags related to equality, women’s rights and the gender pay gap.

Looking broadly at our activism audience, we can see that women account for more than half the total audience size. In terms of age, 50% of the audience is made up on women aged 18 to 34 years old, but we also see 16% of the audience is made up of women aged 35 to 44, and a further 15% is 45 to 54. Our data shows that women’s activism is a global conversation spread across the US, UK, India, Australia, Canada and Japan. That said, English over indexes in terms of language spoken, accounting for 65% of the total audience.

Let’s drill a bit deeper into the holistic audience, who are they influenced by? When you take a look at the influencers and brands tab for the full audience of 165,000 people, we can see Kamala Harris, Joe Biden, UN and the UN Women account, and the World Health Organization all appearing prominently. Clearly, politics and healthcare are of great interest to this audience, and they’re engaged with key figures and news outlets, including the BBC, The New York Times and The Washington Post.

But as our regular readers know, your audience is not a monolith. This report gave us plenty of interesting segments to explore, but for the sake of brevity, we’ve focused on the top three segments. If you’re interested, you can view the full report here. 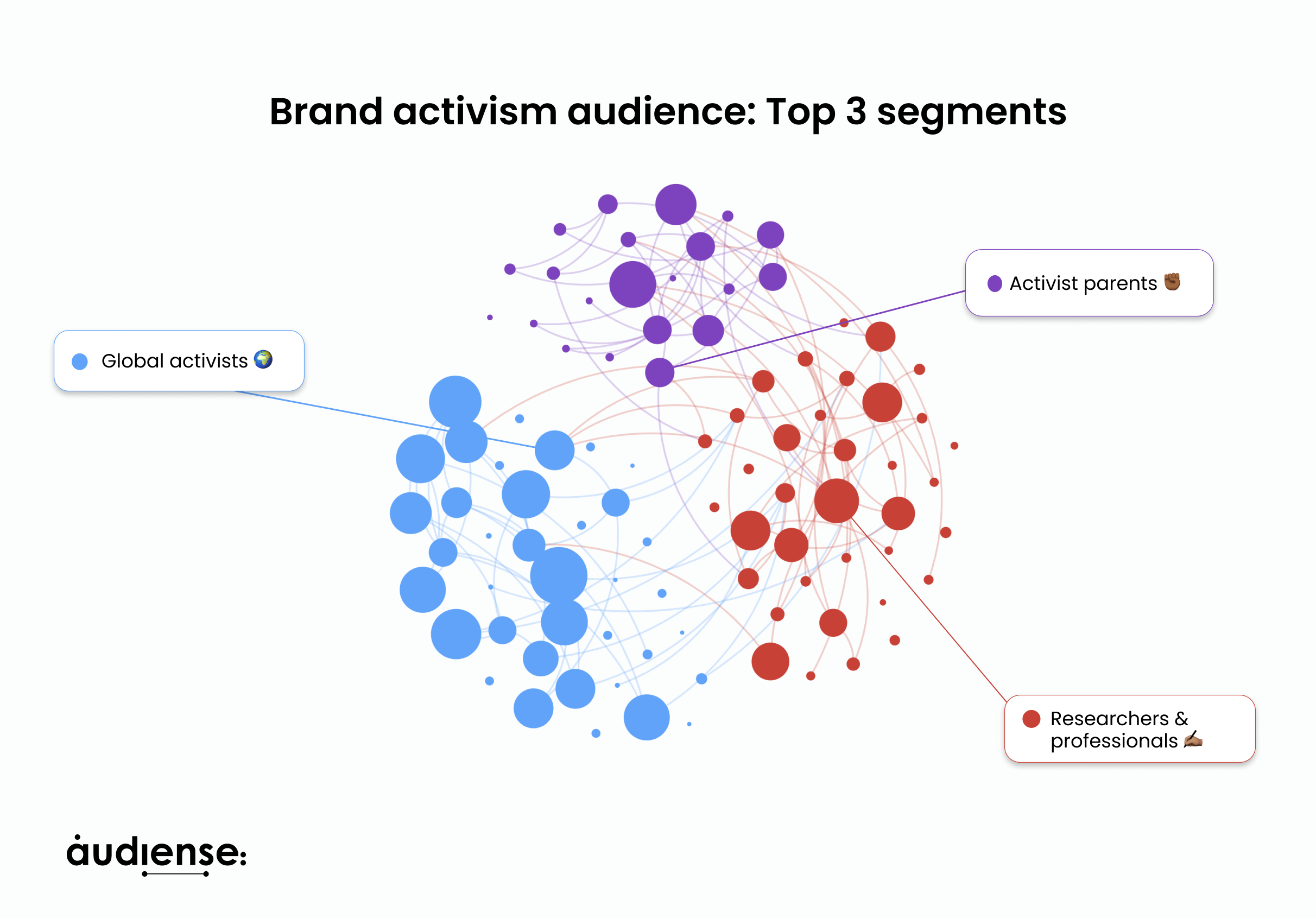 How Ben & Jerry’s, Patagonia & Peloton are making brand activism a core part of their marketing strategy

Given everything we’ve learned about the activist audiences, how can brands create authentic campaigns that demonstrate their commitment to societal issues and connect with their customers? We’ve got some great examples from across industries. Let’s see how Ben & Jerry’s, Patagonia and Peloton are making brand activism a key part of their strategy to attract and retain lifelong customers.

Fitness brand Peloton have faced a rough ride over the last 12 months as they feel the impact of people getting back to their favourite gyms and work-out classes. But what Peloton do exceptionally well is bring brand activism into their content in authentic ways.

We move together. Embrace the discomfort that sparks growth and change. On Wednesday, we will ride and breathe united in two special classes supporting the Black community.

Add the tag #BlackLivesMatter to your profile, and you are invited to wear black in solidarity. pic.twitter.com/5yHetRRZXU


In the wake of #BlackLivesMatter, Peloton listened to their employees and their customers to show their support and help raise awareness in a way that involved more than just updating their logo on social media. Working with Tunde Oyeneyin and Chelsea Jackson, two of their most popular instructors, they created the Speak Up series to support their fitness community and show solidary. Speak Up combined cycling and meditation to create a special series of classes which have been streamed well over 100,000 times.


And they didn’t stop there. Peloton put their money where their mouth was, donating $500,00 to the NAACP Legal Defense and Educational Fund in June 2020 and following up on this activity with a new campaign in 2021 called ‘Together Means All Of Us’, helping them remain accountable to their customers and their community.


It’s worth noting that the Speak Up series wasn’t the first time Peloton has incorporated social causes into their content, and their marketing campaigns.

Every year, Peloton has released special classes for PRIDE, where Peloton members can earn special badges and awards for participating in classes that celebrate the LGBTQ+ community. This year’s special classes included live DJ sessions, Cher and Dolly Parton playlists, and an ode to Broadway - whether you prefer cycling, running, yoga or bootcamps, there really was something for everyone.

Since 1978, ice cream brand Ben & Jerry’s has been serving delicious flavour and most importantly, serving the community. The brand has always had a strong focus on making the world a better place and over the years, they’ve woven human rights, social support and economic justice into the way they position their products and market themselves to consumers.


How do they do it? Using their values as their guiding light, Ben & Jerry’s have been creating socially themed ice cream for decades to raise awareness of causes dear to their hearts including global warning, animal welfare, LGBTQ+ rights and most importantly, supporting marginalised communities.


This began in 1987 with the Economic Crunch, a vanilla ice cream with chocolate-covered almonds, pecans and walnuts which took to Wall Street during the stock market crash in an attempt to brighten a tough day. Since then, they’ve released flavours such as Save Our Swirled for COP21, I Dough I Dough to celebrate love in all its forms in 2015 and One Sweet World to mark 50 years since Martin Luther King Jr’s Poor People’s campaign. Their founders are also not shy in supporting causes. Ben & Jerry’s employees wrote a viral statement on dismantling white supremacy and they hired a corporate social activism manager.

Business people need to do more than just say #BlackLivesMatter. They need to walk the talk. Jerry and I are calling on founders, owners, and executives to sign-on to a letter in support of Rep. @justinamash and @RepPressley bill to end qualified immunity https://t.co/OqvXSSaKnz

We’ve seen some inspiring campaigns from brands, but Patagonia’s approach to tackling climate change caused a serious stir earlier this year when founder Yvon Chouinard chose to give away the company. That’s right, instead of selling the multi-million pound brand, he instead gave it away to two companies that will donate the $100 million of annual profits to “protect nature and biodiversity, support thriving communities and fight the environmental crisis.” If you visit their social media profile, you’ll see their bio simply says ‘Earth is now our only shareholder’.

Hey, friends, we just gave our company to planet Earth. OK, it's more nuanced than that, but we're closed today to celebrate this new plan to save our one and only home. We'll be back online tomorrow.https://t.co/fvRFDgOzVZ


It’s clear that the Patagonia brand, and therefore it’s marketing, follows clear guidelines that put their values and causes at the centre of everything they do. Back in 2017, they launched a campaign called ‘The President Stole Your Land’ to protest former President Trump’s decision to reduce the size of two national monuments, Bears Ears and Grand Staircase Escalante. This bold statement supported the efforts of environmental campaigners and clearly demonstrated Patagonia’s passion for the environment and protecting nature.


Patagonia also put their values front and centre in their online retail experience. Customers can easily navigate to the Patagonia Action Works page, which encourages people to get involved in a variety of causes including protecting rivers and wild places, supporting agriculture, and stopping the climate crisis. Their website homepage drives directly to these causes before you can even start to look at their clothes, putting people ahead of profits. This kind of messaging also feeds through seamlessly on their social media channels.


How can you put purpose at the heart of your marketing in 2023?

As we head into a brand-new year, how can you put purpose at the heart of your marketing? While there are no quick wins, these three brands have given us plenty of food for thought. Here are the key takeaways to consider.

Ready to take the next step for your campaigns? With tools like Audiense, conducting in-depth audience analysis and discovering actionable takeaways is possible for brands that want to approach their marketing strategy with confidence. Sign up today.

Previous Story
← Big news - Audiense’s 1st acquisition, we just got even better!
Next Story
How to build your audience segmentation with free Audience Intelligence reports →