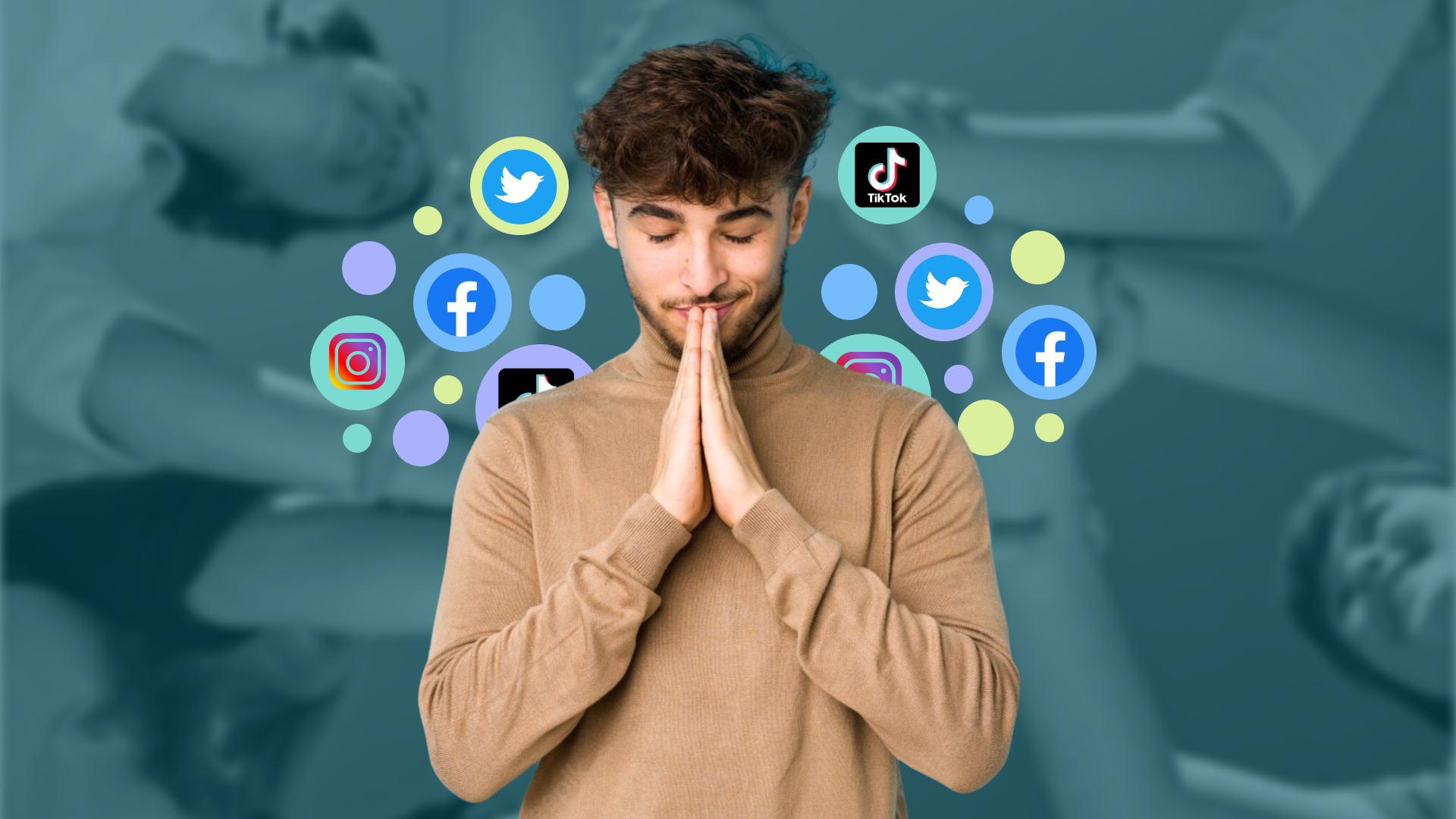 When was the last time you interacted with a charity on social media? Maybe you donated to a friend’s 10k run, you signed a petition to protect a natural beauty spot, or you RTed a cute pic of a panda (guilty).

Charity begins at home is a common phrase, but what if in the 21st-centruy, charity actually begins online? Or at the very least, charity depends on a social media presence to engage existing supporters and reach new ones. It might not be as snappy, but the data is showing us that it’s undeniably true.

Let’s take a look at the current state of play for NGOs online:

Online activism is one of the cornerstones of organic social for NGOs in the digital age, with many NGOs depending on the charity of social media for fundraising, building awareness, and gaining support for their campaigns – whether that’s sharing their latest news and projects or collecting online signatures that will bring about real-world change.

We wanted to pay closer attention to how NGOs are using social media to spread the good word. In this blog, we’re zooming in on how Greenpeace, WWF and the Rainforest Alliance are making social media a success story… and we’ll go behind-the-scenes to understand who is engaging with the online conversation around climate change and wildlife preservation. There’s no time to lose, let’s get stuck in.

Who is engaged with conversation around sustainability?

When it comes to online conversation and NGOs, it’s not just about who is talking the talk, we want to see them walk the walk too.

To understand who is engaging with the conversation around sustainability, we decided to run an interconnectivity report, which explored the intersection of people following Greenpeace, WWF and the Rainforest Alliance. This gave us an audience of just over 70,000 people, who share a passionate interest in protecting the environment and tackling climate change.

Looking broadly at this audience, we can see that it has an almost 50/50 split between men and women. They tend to skew toward the Gen Z demographic, with 30% of the audience being between the age of 18 and 24. While the US makes up around 30% of this audience’s location, we can see that the UK, Canada, India and Australia all significantly contribute to the online conversation around our three NGOs.

As our regular readers know, your audience is not a monolith. Let’s take a look at the audience segments that add up to this larger audience and the insights they bring. This audience actually breaks down into seven perfectly formed segments, but in the interest of not drowning you in the detail, we’re going to focus on the top five segments. 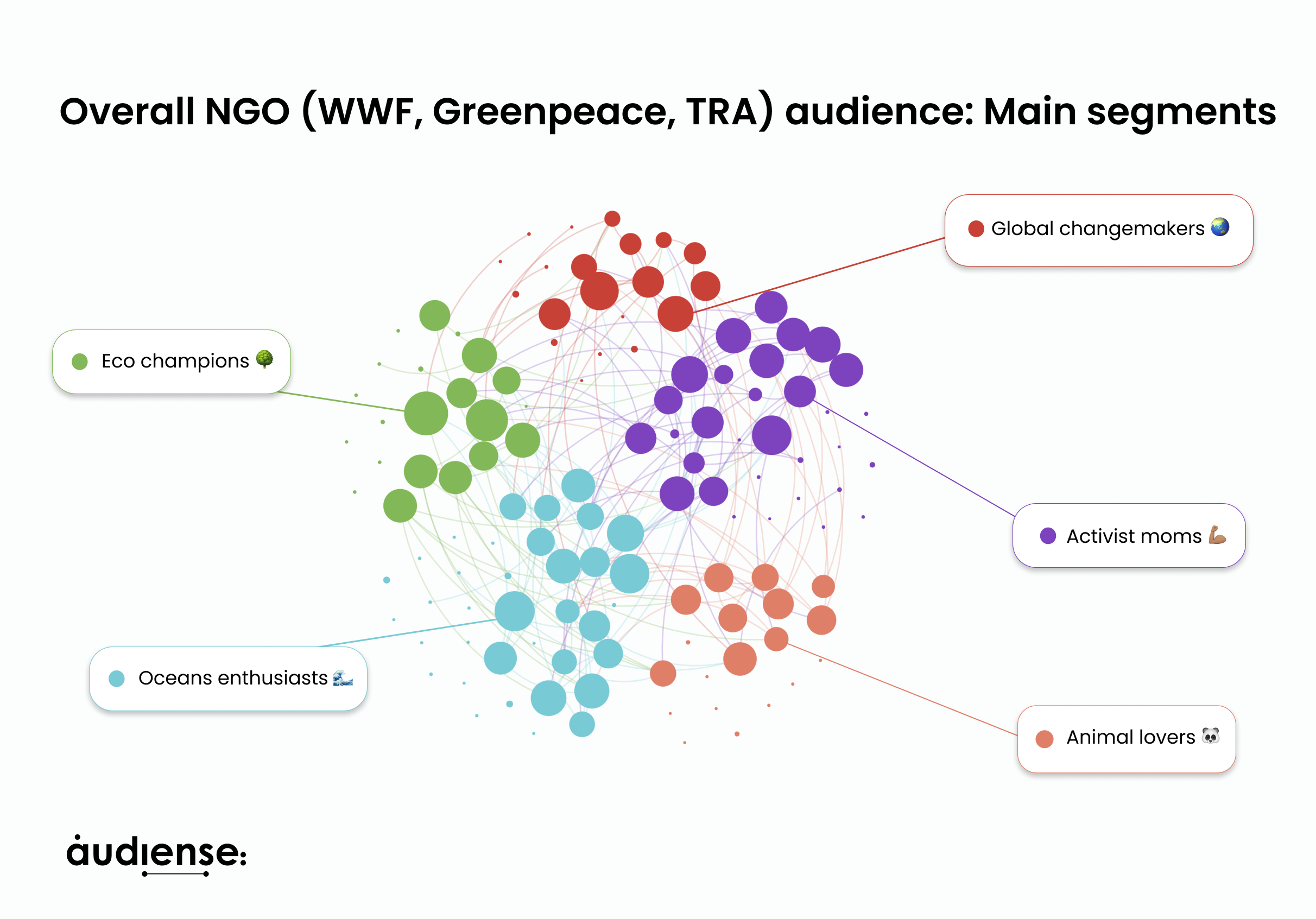 How are NGOs driving change online and IRL?

We’ve spent some quality time looking at each of the segments associated with Greenpeace, WWF and The Rainforest Alliance. Now it’s time to see how this translates into the work they do online. Here are some of our favourite campaigns from these three brilliant NGOs.

The World Wildlife Fund has been busy raising awareness about preservation and the reduction of human impact on our natural world for over 60 years. With thousands of members based in over 100 countries globally, this NGO has serious international reach and plenty of content at their fingertips. What matters most is making sure they’re capitalising on key moments and sharing the good word with supporters old and new.

What WWF does well is embracing different social channels to ensure they’re hitting the broadest possible audience of animal lovers. Most importantly, they’re adept at tailoring their content to ensure it hits the mark. On Instagram, they use high-res photography of smiling otters, stunning jaguars and teeny, tiny primates to create a curated feed of heart-melting animal content – hitting Instagram followers right in the feels.

On TikTok, they transform memes into informational (and entertaining) videos about the policies that are impacting wildlife. They also educate their younger followers by providing content that helps them eat more sustainably, consume responsibly, and embrace lifestyle changes that can reduce their carbon footprint. And of course, we simply cannot ignore ✨corn✨ content. It has the juice.

WWF has been one of the driving organisations behind TikTok’s increasingly green focus. In 2019, they initiated #MyEarthHour2019 on the platform, the world’s largest collective environmental movement. They partnered with TikTok to bringt his event to the channel, inviting users and influencers to support environmental protection. The campaign led to over 50,000 videos being created, 100 million video views, and a cool 4.5 million in-app likes for Earth Hour related content.

We mentioned earlier that Greenpeace believe online action can be as bold and daring as outdoor stunts, and certainly, their Rang-tan advert caused a social media storm that changed the way the public think about palm oil. At just 1 minute and 30 seconds in length, this animated ad voiced by Greenpeace ambassador Emma Thompson aimed to make palm oil as toxic as possible with the heart-wrenching story of Rang-tan.

In the ad, Rang-tan moves in with a little girl after his forest home is completely destroyed by the palm oil trade. When UK grocer Iceland chose to use it as their 2018 Christmas advert, it was quickly banned by the UK’s approval body Clearcast for breaching political advertising rules, which of course, made it go viral on Twitter.

You won't see our Christmas advert on TV this year, because it was banned. But we want to share Rang-tan's story with you… 🎄 🐒
Will you help us share the story?https://t.co/P8H61t6lWu

Thanks to the controversy around Clearcast’s decision, the story of Rang-tan clocked up more than 80 million views across social media platforms. Arguably more than it ever could have done on TV. Furthermore, 1.2 million people signed Greenpeace’s palm oil petition to make businesses take the issue more seriously, and it won multiple awards. It also led to a flurry of schools asking for teaching materials on the subject, helping the message go beyond social media and into the classroom for future generations.

Hot off the press, we have the Rainforest Alliance and their #FollowTheFrog campaign, which ran from 26th September to 2nd October 2022. The Rainforest Alliance is an international non-profit organization working at the intersection of business, agriculture, and forests to make responsible business the new normal. Their aim is to protect forests, improve the livelihoods of farmers and forest communities, promote their human rights, and help them mitigate and adapt to the climate crisis.

This week-long campaign took place across their key platforms – Instagram, Facebook, LinkedIn and Twitter – drawing in star power from the likes of Bonnie Wright and sharing educational content that puts the farmers at the forefront of the campaign. They also secured support from the various consumer partners who proudly display their frog certification.

Next time you bite into this deliciously popular treat, look for our green frog seal! 💚🐸 pic.twitter.com/izDBDF0TWu

This week we're celebrating the @RnfrstAlliance #FollowTheFrog campaign!🐸 Did you know each time you choose AERO you are supporting cocoa farmers & their communities. pic.twitter.com/Sm5nrp2mu7

Encouraging brand partners to share content that supported the #FollowTheFrog initiative ensured the campaign had new and fresh content to build awareness. And perhaps most importantly, it helped spread the message about the Rainforest Alliance as a legitimate certification that promotes fair and sustainable food production practices in a shareable and approachable format.

What can you learn from NGOs online?

Clearly, there’s a lot we can learn from NGOs on social media, no matter your industry or marketing focus. Let’s wrap it up with some food for thought on how you can use social media to build awareness and truly connect with your ideal audiences.

P.S. If you liked this, you should definitely read how WWF used audience intelligence to deliver key messages to relevant stakeholders.

Previous Story
← Fix up, look sharp: 6 Twitter bio tips to make your profile stand out!
Next Story
How audience analysis helped WWF to engage a niche audience for their Nature Positive campaign →