After the uncertainty of the last few years, the travel industry is back and better than ever. As consumers start to think about their 2023 getaway, there’s never been a better moment to take a fresh look at your marketing strategy.

What does the industry have in store for brands and consumers this year? Here’s some of the key trends for travel marketers to consider:

When it comes to the Happiest Place On Earth, providing exceptional experiences is all in a day’s work. Disney is the epitome of marketing excellence. With resorts in Paris, California, Orlando, Hong Kong, Tokyo and Shanghai, Disney is a masterclass in tourism marketing. They’re also experiencing a strong comeback post pandemic, reporting a breath-taking $28.7 billion in revenue last year from the parks alone – a 73% increase year-on-year.

2023 is a landmark year for Disney as a brand, celebrating 100 years since the company was founded this October alongside their current Walt Disney World 50th Anniversary celebrations with experiential activities taking place in the parks. They’re also busy nurturing fans old and new, with the launch of the Disney+ streaming service, continuing investment in much loved franchises, and even the launch of their videogame Dreamlight Valley at the end of last year.

So, how can you be more Disney in 2023? Grab a cup of coffee and get stuck into our first spotlight analysis of the year, unpacking the magic of Disney Parks & Experiences.

Before we explore how you can bring a sprinkle of Disney magic to your marketing, let’s spend a little time getting to know their audience.

To help us understand who makes up Disney’s loyal fanbase, we ran an interconnectivity report which analysed followers of @disneyparks, @disney, @waltdisneyworld and @disneyland. This gave us a total audience of just under 600,000 people.

Looking broadly at our Disney audience, the audience split is nearly 50/50 for men and women, with women being slightly more engaged in the conversation. The audience is largely US based, but we can see on our location map that conversation about Disney is happening all over the world! Key cities include LA, London, Orlando, Chicago and Miami

As a family friendly brand, we’d expect to see a younger age demographic engaging with the brand. But what about Disney adults? 18- to 24-year-olds make up the majority of our audience at 33%, but we can also see that about a quarter of the global audience is aged 24 to 34 years old – which is 6% higher than the 13- to 17-year-old audience.

We see that the keywords love, Disney, life and fan all appear prominently in their social media bios. Top accounts influencing this massive audience include, of course, Disney Parks, Walt Disney World, Walt Disney Studios, and a plethora of Disney brands and franchises. But they’re not just Disney fans, they’re also interested in sports, pets, education and shopping.

What does this actually tell us about Disney fans? While we can make some general assumptions about who they are based on this broad data, as our regular readers know, your audience is not a monolith. So, we’ve broken down this audience into five bite-size segments to help us drill down into individual interests. Here’s all the juicy details. 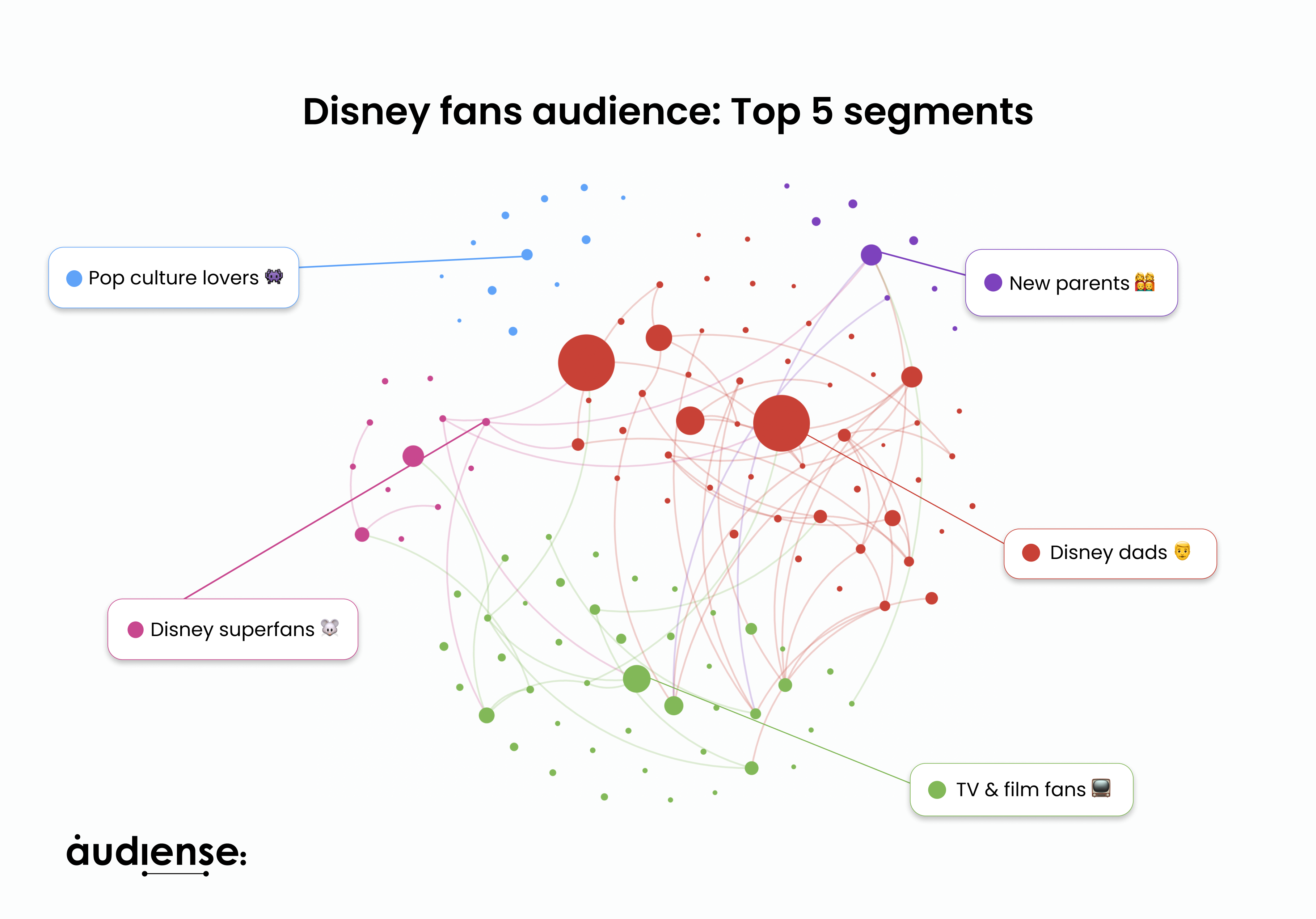 1. Know each of your segments inside out

We talked earlier about the importance of breaking down your customers into bite-size segments and as far as we can tell, Disney does not believe in a one-size-fit-all approach to marketing. With a global audience and a brand that spans generations, from the classic Mickey Mouse lovers to Elsa enthusiasts and Winnie the Pooh collectors, Disney makes tailoring their campaigns look effortless.

Love to get fit in a friendly environment? Sign up for a #runDisney event and start collecting exclusive medals to celebrate your next personal best.


Are you a magpie that loves to collect shiny things and celebrate special memories? Treat yourself to exclusive pins and merchandise, only available in the Disney parks.


An amazing example of this is also the annual Epcot Flower and Garden Festival. While gardening may not spring to mind as a 10-year old’s favourite past-time, this particular event is all about the older demographic. They cleverly tailor their marketing to the appropriate channel, choosing Facebook as the place to reach parents and grandparents with a passion for plants. Commit to your brand across every touchpoint


2. Commit to your brand across every touchpoint

One of the most incredible things about Disney’s marketing strategy is that they’re capable of taking a clear and distinctive brand, rooted in bringing happiness to the masses, and successfully rolling it out across locations, language barriers, and platforms.

To enable this, they literally have a Marketing Centre of Excellence, responsible for promoting resorts, experiences, signature vacations and consumer products. If creating your very own centre for marketing excellence isn’t in your budget, then start small. How does your brand translate across touchpoints?


A large part of Disney’s branding success comes down to expertly executing a multi-channel approach to their digital marketing. In addition to maintaining multiple websites, Disney Parks has a social presence across Twitter, Instagram, TikTok, YouTube, Facebook… you name it. Each account is tailored to the intended demographic and features content most likely to appeal to them.

Are you ready for the EPCOT International Festival of the Arts? 🎨 We hope so because this year is filled with culinary works of art that will add tons of flavor to your palate! Head to the blog to see more: https://t.co/M7MrRFro3J #DisneyEats pic.twitter.com/C2l9aYuctm


But while their TikTok videos may look and feel very different to their Twitter feed, one thing remains consistent. Content is full of emotion, nostalgia and storytelling, all key elements of the wider Disney brand. And if you can’t make it to a Disney Park in the near future? The Disney World website cleverly points customers to their next destination so they can enjoy Disney from the comfort of their own home. 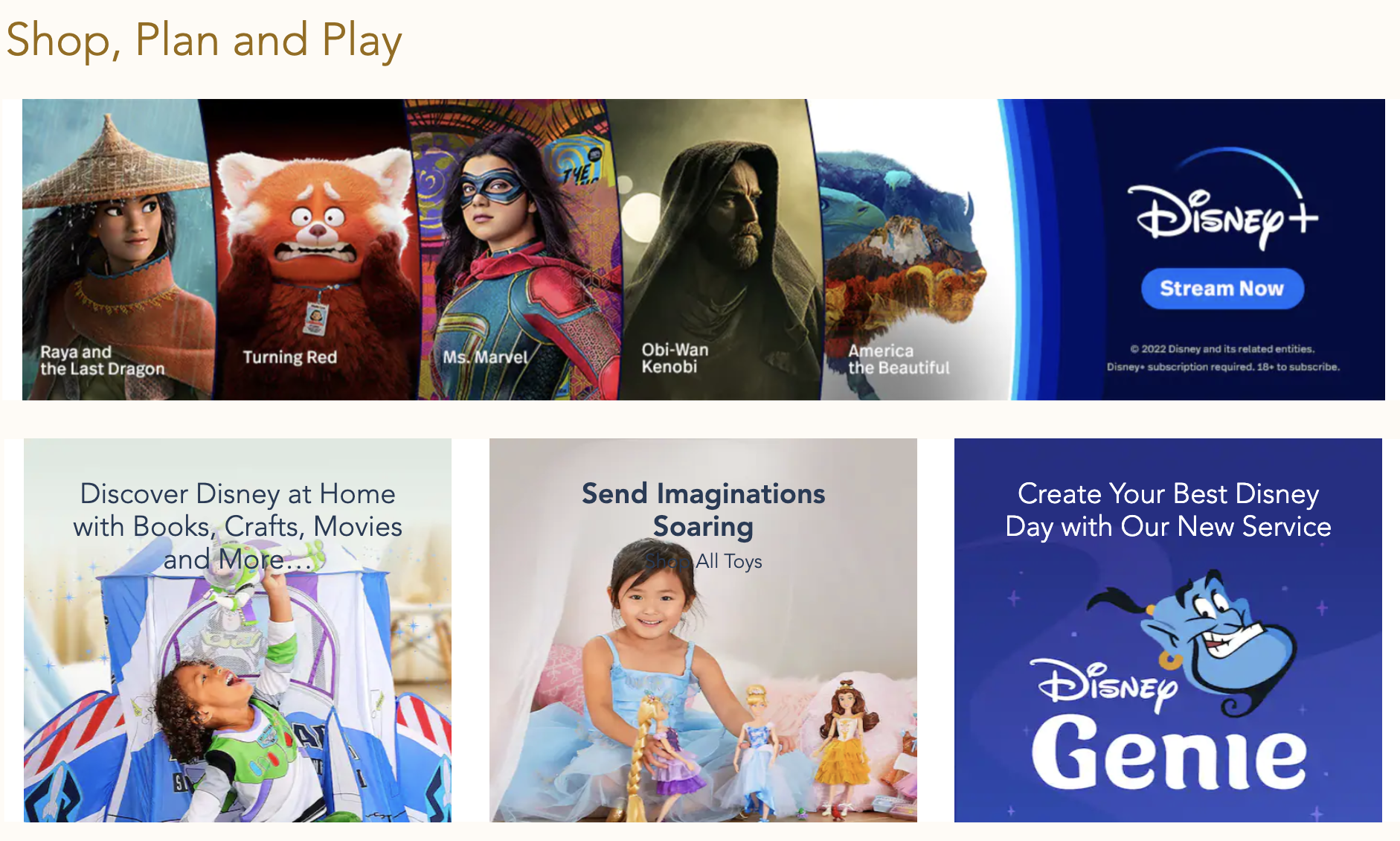 3. Put the experience at the heart of your marketing

Have you ever seen one of those TikTok’s where a parent tells their toddler they’re going to Disneyland? Most kids either can’t stop squealing with joy or they burst into tears. The chance to meet the big mouse himself is just too darn exciting.


Disney have done a spectacular job of turning their parks into a sacred space that their customers make the pilgrimage to as often as possible. This is entirely due to the time, energy and creativity the brand put into making every guest’s experience as memorable as possible. From themed restaurants and menus to seasonal shows and activities, Disney are constantly changing things up and making sure they’re on top of what’s trending.

@disneyparks This year's #DisneyHolidayCelebration line up has us like 🤩 Tune in on Nov. 27 only on @ABC Network 🎤#DisneyWorld #Disneyland #Disney ♬ original sound - Disney Parks


Experiences don’t just have to be in-person. Disney seamlessly connects their physical attractions with digital magic, closing the loop between offline and online, and increasing dwell times in the park.

For example, the Cinderella Castle Mural of Memories, located in their Orlando resort, uses augmented reality created in collaboration with Snap to bring Disney fans together. By using the dedicated My Disney Experience app, visitors can point their camera at the iconic Cinderella Castle attraction and access a mural of memories created by park guests, as well as adding their own photos from their trip.


4. Make your customers a part of your story

As an iconic brand loved by people all over the world, it’s no surprise that people love to share photos of their trips to Disney World or Disneyland on social media. This presents an opportunity for every visitor that walks through those magical gates to become a micro-influencer and a brand advocate.


While it’s nice to have a glitzy celebrity taking photos at key attractions, micro-influencers are a key component in Disney’s marketing strategy. According to research, 61% of consumers trust influencer recommendations and 40% of people have made a purchase based on them. Even better, when a visitor truly enjoys the experience, they’re probably posting for free.

It would be easy for Disney’s marketing team to rest on their laurels and consider the job done. Instead, their team are constantly dreaming up new ways to engage people visiting the parks and capitalise on user-generated content to keep the cogs of the online word-of-mouth machine turning.

Nostalgia is one of the most powerful tools in Disney’s marketing kit. By embracing nostalgia and encouraging their audience to engage with their favourite characters – and probably childhood memories – Disney are able to inspire long-term loyalty and real engagement.


A truly magical example of this comes from their 50th anniversary celebrations and the Disney Fab 50 Character Collections. For a limited time, Disney fans are able to explore the parks and search for the 50 golden sculptures, featuring much loved characters including Mickey and Minnie Mouse, Donald Duck, Goofy, Pluto and more! Fans can snap and share pics, plus you can collect commemorative coins and medallions in 50 unique designs to celebrate the moment.

Oh boy, that was a lot to take in! Let’s recap how you can capture some of the Disney magic in your 2023 marketing plans, whether you work in the travel industry or not.

Ready to take the next step in audience intelligence this year? With tools like Audiense, conducting in-depth audience analysis and discovering actionable takeaways makes creating tailored marketing strategies easier than ever.

Previous Story
← 2022 in review: Cheers to 10 amazing years!
Next Story
The impact of audience intelligence on ecommerce →