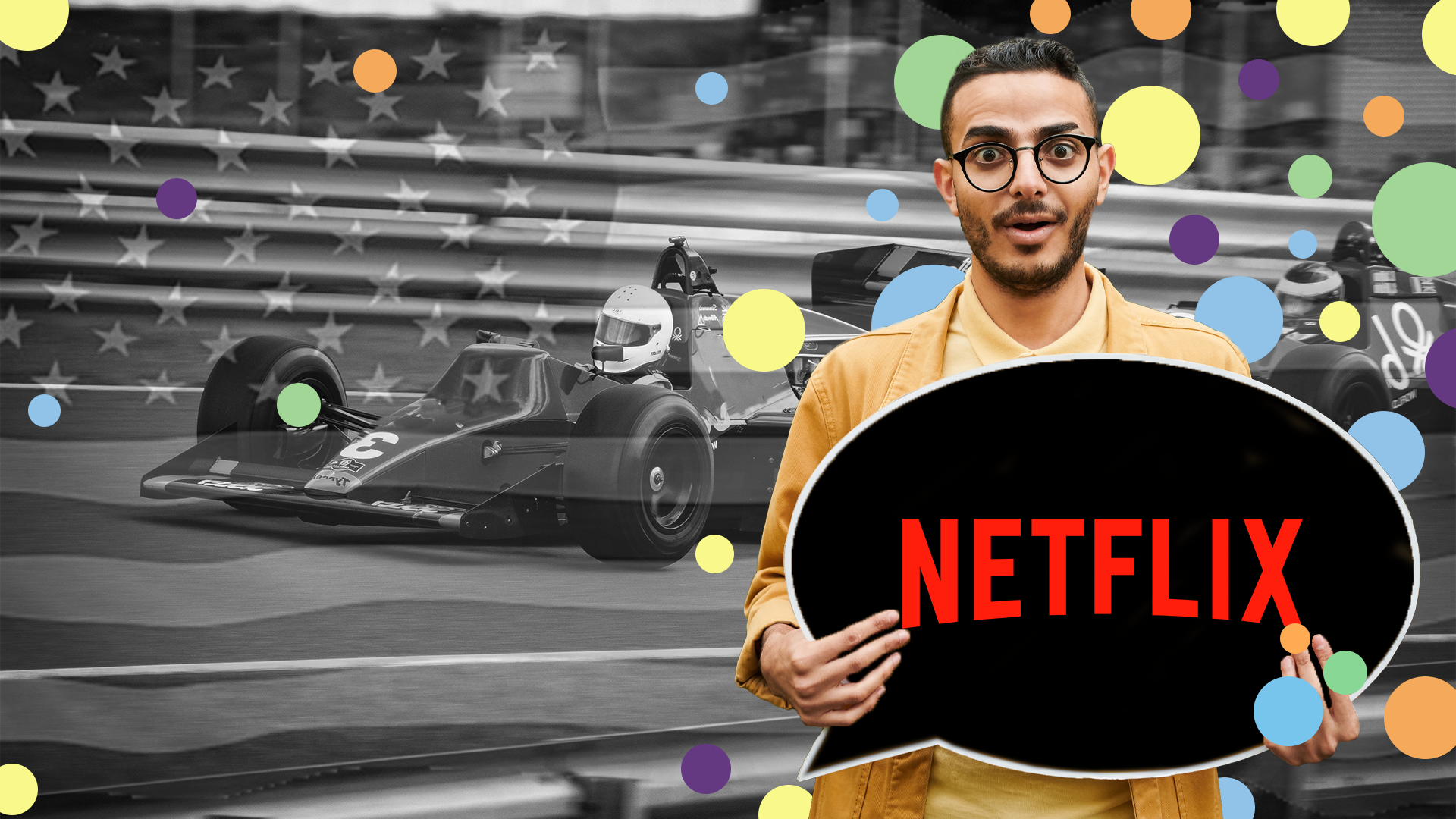 How a Netflix Docuseries Set Off a Rise in F1 Popularity 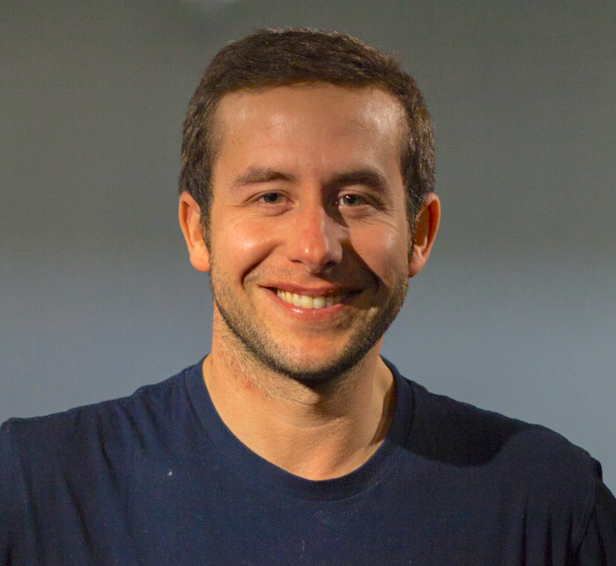 In fact, the final race in the 2021 Grand Prix achieved the 7th largest cable audience on record in the US. It seems the US is ready to get fast and furious. You might be wondering, what exactly is driving this interest? Well, we’d chalk it up to the Netflix effect.

Drive to Survive, the Netflix docuseries, has played a significant role in F1’s meteoric rise, bringing their audience behind the scenes of the racing world. Bringing the high-octane action from the race track and beyond direct to the US audiences’ TV screens, tablets and smartphones has built an intimate connection between world-famous brands and their drivers.

In fact, we’d argue that the main steer of their success comes from audience intelligence. A deep understanding of their target audience helped Drive to Survive and F1 curate more engaging behind-the-scenes content across all the right platforms.

Audience intelligence lays the foundation for marketing success, by fuelling the ability to segment and target individual audiences more effectively. Let’s dive into how leveraging audience data can drive massive growth, as demonstrated by Netflix and F1.

P.S. Don’t forget to bookmark this for later and share it around with your marketing friends, there’s plenty to learn.

How Drive to Survive fuelled F1 viewership in the US

In case you didn’t know, F1 is an international sporting event that involves racing cars. Since the 1950s, the championship has increased in popularity worldwide, especially in Europe and the United Kingdom. But it never quite managed to break the US… until now.

This is surprising, considering the popularity enjoyed by Indycar and NASCAR. So, what exactly was going on with F1? While it’s hard to say for sure, it’s possible that a lack of promotion in the market alongside heavy saturation of existing racing tournaments in the US, made it difficult for F1 to achieve the cut through they needed to race to the top.

But times have changed. With the launch of Drive to Survive in 2019, F1 has experienced a huge increase in viewership. Drive to Survive was developed as part of Liberty Media’s - the parent company of F1 - strategy to expand F1 into new markets.

When you take a deep dive into ratings and their online audience segments, it’s plain to see they got exactly what they wanted. Raceday ticket sales for the first US Grand Prix held after Drive to Survive debuted rose 15 percent. When the show’s third season released in 2021, it only took a few days for it to become the most-watched show, racing ahead of powerhouses like Ginny & Georgia and medical drama New Amsterdam.

This acceleration in audience numbers directly correlated with conversation online. The latest season of F1 also got viewers hyped for Drive to Survive season 4 after the Hamilton and Verstappen feud for the Driver Championship 2021 season, which saw Verstappen win amid HUGE controversy.

The 4th season of Drive To Survive is officially set to release just over a month from today 🔥 pic.twitter.com/XxGJTjTLrH

Watch drive to survive on Netflix. Who would've thought formula one racing could have so much drama oooo 😂

Watching F1 drive to survive has helped me appreciate the NFL a lot more. The use of resources and management of behind the scenes staff is exciting and adds to the on the field action.

Who is driving the conversation around F1?

In early 2019, motorsport series’ global research director said in a Reddit AMA that F1 was struggling to attract a younger audience, with under 25s making up just 14% of their audience. But in the 2021 Global F1 Fan Survey, President of Motorsport Network James Allen said:

It was no secret that F1 had been struggling for years to attract younger fans and females especially and this survey speaks volumes about how the new F1 management team’s digital first approach and the funnel effect of projects like Netflix Drive to Survive are engaging a new generation of passionate F1 fans. And the racing on track is delivering too.”

The 2021 survey had over 160,000 responses and its highest female participation ever, accounting for 18% of respondents, compared to just 10% four years ago. According to Audiense data, things have definitely changed dramatically since 2019.

The online conversation around F1 is now largely driven by the 18-24 demographic, accounting for almost 40% of mentions in the US. This is closely followed by 25-35, who make up an additional 25% of the audience. This is a serious shift for F1. It’s also roughly in line with their established territories. In the UK, the 18-24 segment is about the same and the 25-34 segment comes in at just over 20%.

The increased representation of women noted in the official F1 survey is also apparent. While the demographic data does skew toward men, nearly 20% of the online conversation involves women and we’d be willing to bet this will continue to grow.

There’s a broad spread of newly minted fans across the US, with Chicago, Los Angeles, Austin, Miami and Dallas leading the way. It’s particularly interesting to see that geo-driven segment in Texas (Austin and Dallas, specifically) given these audiences consist of hardcore Nascar fans. So what? Well, these are also the people that are likely to be the most influential in driving that F1 popularity to a broader audience. 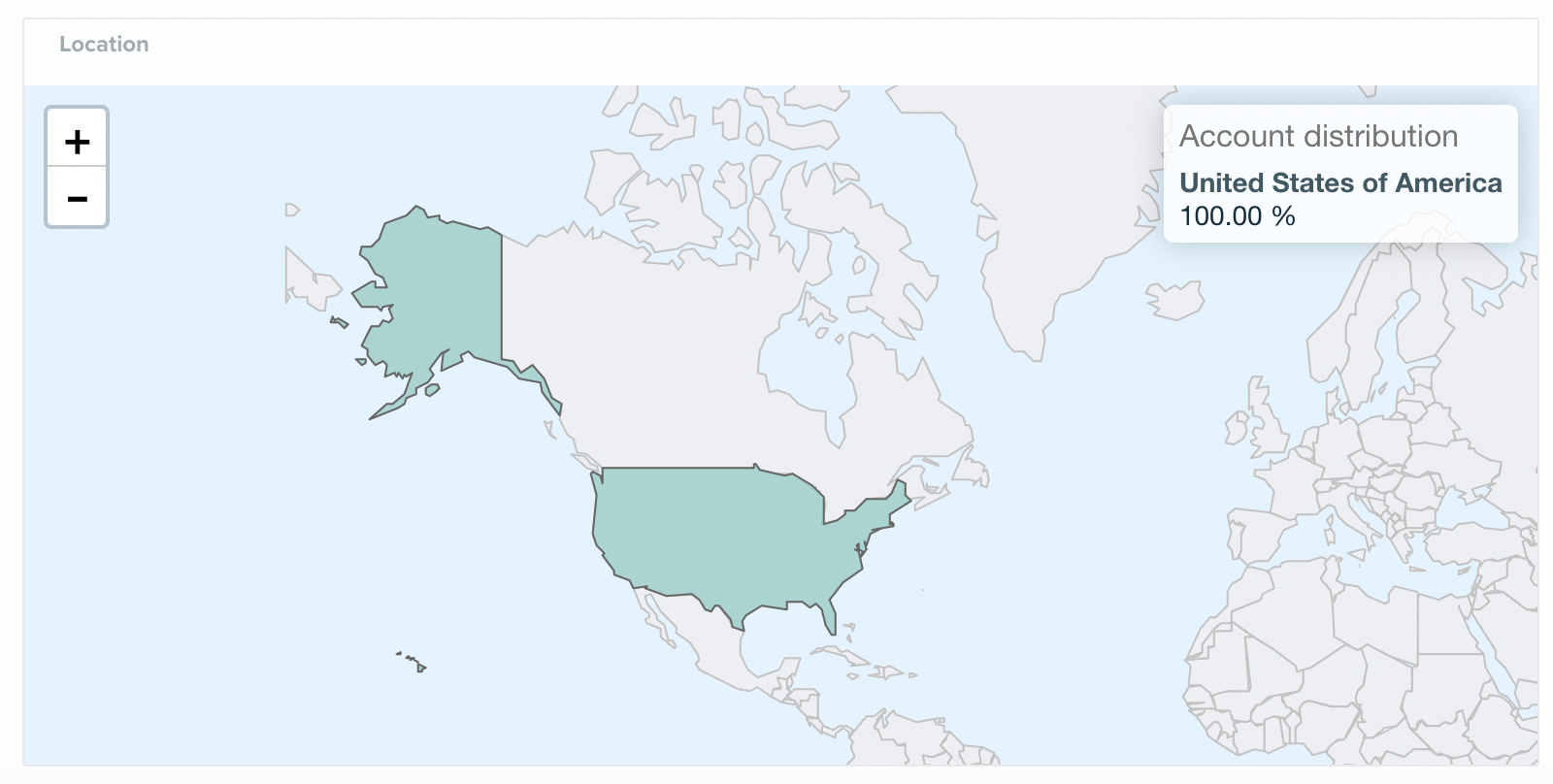 Demographics are all well and good, but if you want to reach them effectively, you need to break them down into distinct segments. A data-driven campaign would focus on influencers, partnerships, and the online habits of their audience to build a multi-faceted marketing strategy.

We’ve taken this massive monolith and separated them into four main audience segments for F1 to tap into, and they’ve produced some interesting findings.

Who they’re influenced by

Let’s take a look at the top 15 brands and influencers. Realistically, F1 is probably not going to be able to get POTUS to tweet about motorsport. But it’s fascinating to see a crossover between motorsport fans and space enthusiasts following Elon Musk, NASA and SpaceX.

It also proves the value of using every asset available to you. Tapping into Lewis Hamilton, Daniel Ricciardo and the various brands that participate in F1 - for example, with behind-the-scenes content - is likely to engage and persuade fans old and new to keep watching. 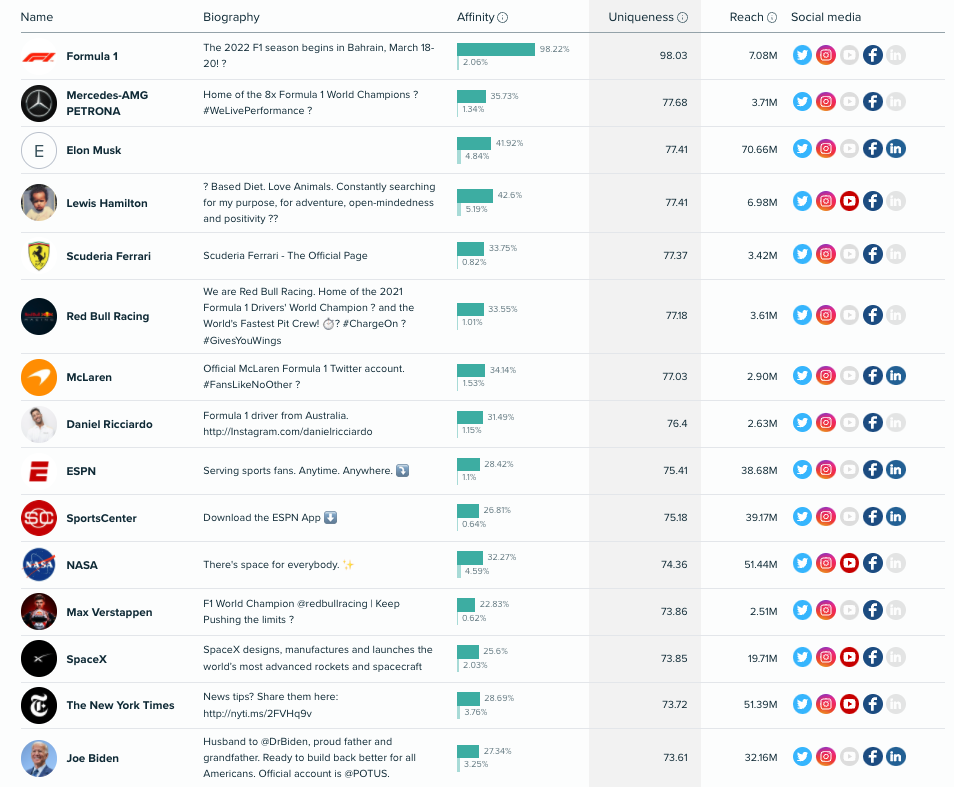 Media buys are hugely important for brands looking to expand their reach and our data shows that F1 fans in the US are most likely to be engaging with: Where are they spending time online?

Where are motorsport enthusiasts in the US spending their time? Data shows they’re active every day of the week but they’re an audience of night owls, spending most of their time online between the hours of 6pm and 5am.

Unlike the general population, they’re significantly more likely to be using a desktop computer or laptop versus a mobile device. This is reflected in the platforms where they spend most of their time, with Reddit, Medium and Twitch all appearing as the top networks for F1 fans in the US.

The main highlights here are F1 fans in the US are 3 times more likely to use Medium and Reddit. They also spend time on TikTok, SoundCloud and YouTube, suggesting they’re likely to consume audio content as well as video. This breadth of platform usage and media formats provides loads of new ways for F1 to diversify and re-purpose existing content to keep reaching new audiences, beyond the standard motorsport superfan. 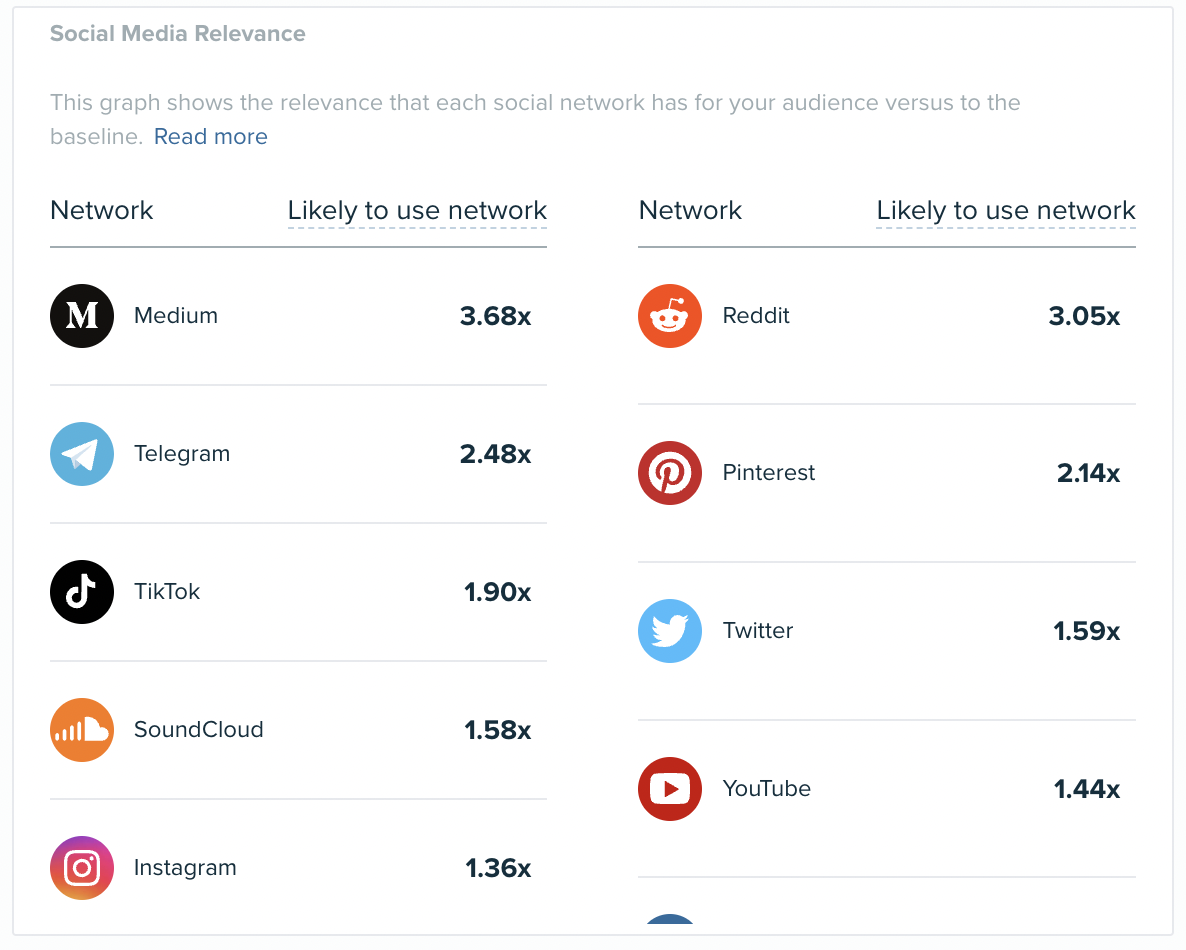 How F1 are steering the conversation in the US

We know who they are, what they’re watching, and where they’re spending time. Now we want to know how exactly F1 and Drive to Survive used this insight to expand their reach into US audiences.

They’ve taken to social media to share latest news and sneak peeks of behind-the-scenes content. In 2020, F1 created a TikTok account that has since amassed over 3.5 million followers.

This was smart, not just because TikTok is an up-and-coming platform for reaching younger audiences, but it’s the perfect place to showcase their vast bank of video content from drivers and car brands, as well as sharing behind-the-scenes content in the form of interviews with drivers and the teams behind them.

They also had a shift change internally, allowing drivers to post more about the F1 world to engage fans. This is revolutionary for the brand, as the former CEO didn’t allow filming inside the paddock unless you were a TV broadcaster.

In days gone by, F1 fans wouldn’t see their favourite drivers unless they were in a helmet. Thanks to Drive to Survive, they’re getting more insight into theirfavourite drivers' lives and personalities than ever before. The behind-the-scenes elements of the docuseries give insight into the driver’s emotions, creating a human connection that is more likely to create superfans that are invested in F1, as a sport and as a way of connecting with their heroes.

Organic content aside, F1 has also been collaborating with huge influencers such as Khaby Lame, who has over 131 million followers on TikTok - easily one of the largest audiences on the platform.

F1 also seems to be paying attention to that gamer audience crossover identified in the audience segments. Lando Norris, an F1 driver who recently announced a new contract with McLaren, has been breaking records over on Twitch, thanks to the growing F1 and Drive to Survive audience. Lando went from averaging 2,000 views to hitting over 70K views on a single broadcast.

With social media and influencers ticked off, another area of focus for F1 is sponsorships and potential partners.

It stands to reason that when you have so many famous car manufacturers such as Mercedes, Ferrari and Aston Martin participating, you want to make sure you’re tapping into those audiences. It also helps that F1’s audience are highly motivated by brand names. Logos are prominently displayed at F1 events, reinforcing that connection.

It could be argued that this is especially important for the car lovers segment we identified. This type of audience is heavily influenced by brands such as Porsche, Audi, Lamborghini, Maserati. But it’s not just the super-powered James Bond cars they’re interested in, household names and family favourites appear, such as Ford, Honda and BMW.

Going deeper into segments like this also creates food for thought for continuing to grow F1’s audience. Between the brands and luxury cars, media outlets such as Car and Driver, Motor Trend and Autoblog rank highly. This suggests they’re not just interested in F1, this consumer segment is hungry to read, learn, and talk about cars as much as possible, massively amplifying F1 and Drive to Survive beyond F1 superfans into petrol heads and people interested in how stuff works, not just the fancy logos. 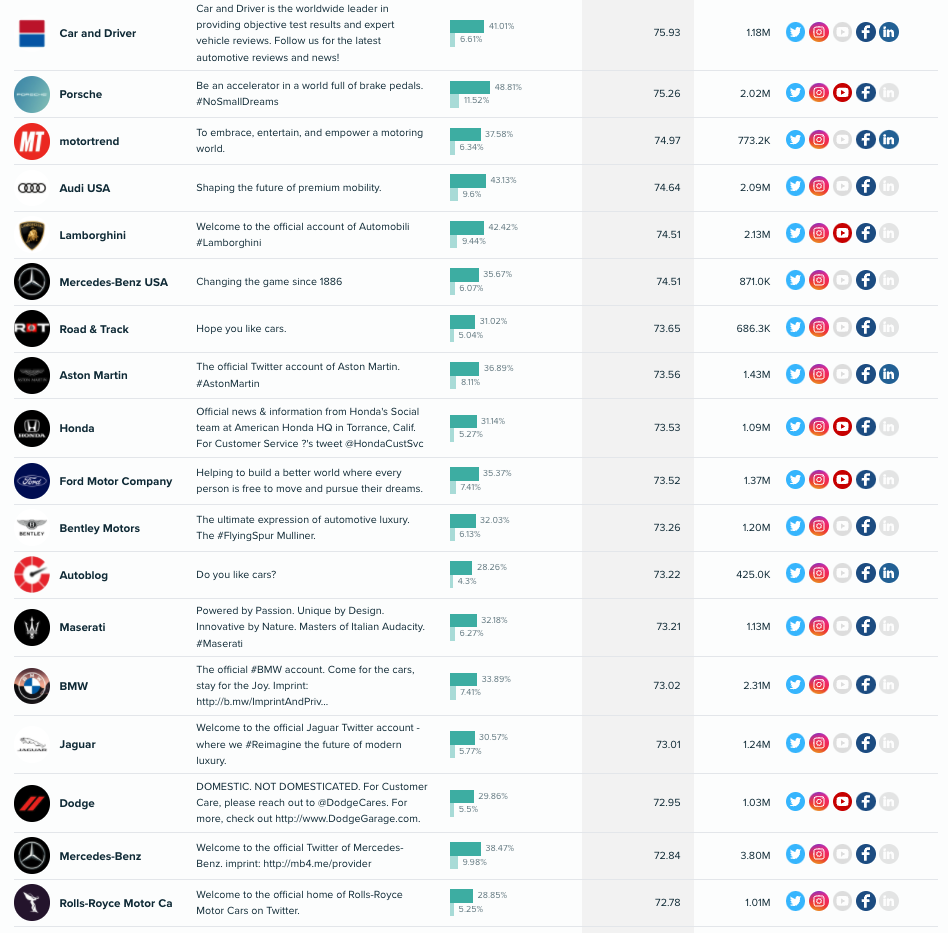 Everything considered, how could F1 go the extra mile in the 2022 season and continue to build their brand in the US market?

Here’s some key takeaways for delivering audience-focused campaigns that are likely to drive brand growth.

It’s just a matter of taking a deep dive. With tools like Audiense, conducting in-depth analysis and discovering actionable takeaways is possible for brands that want to approach their marketing strategy with confidence.

Previous Story
← [INTERVIEW] How TV producers are bridging the gap between social data, risk, and creativity (and how you can too)
Next Story
9 ways retailers can boost sales with user generated content & social media →