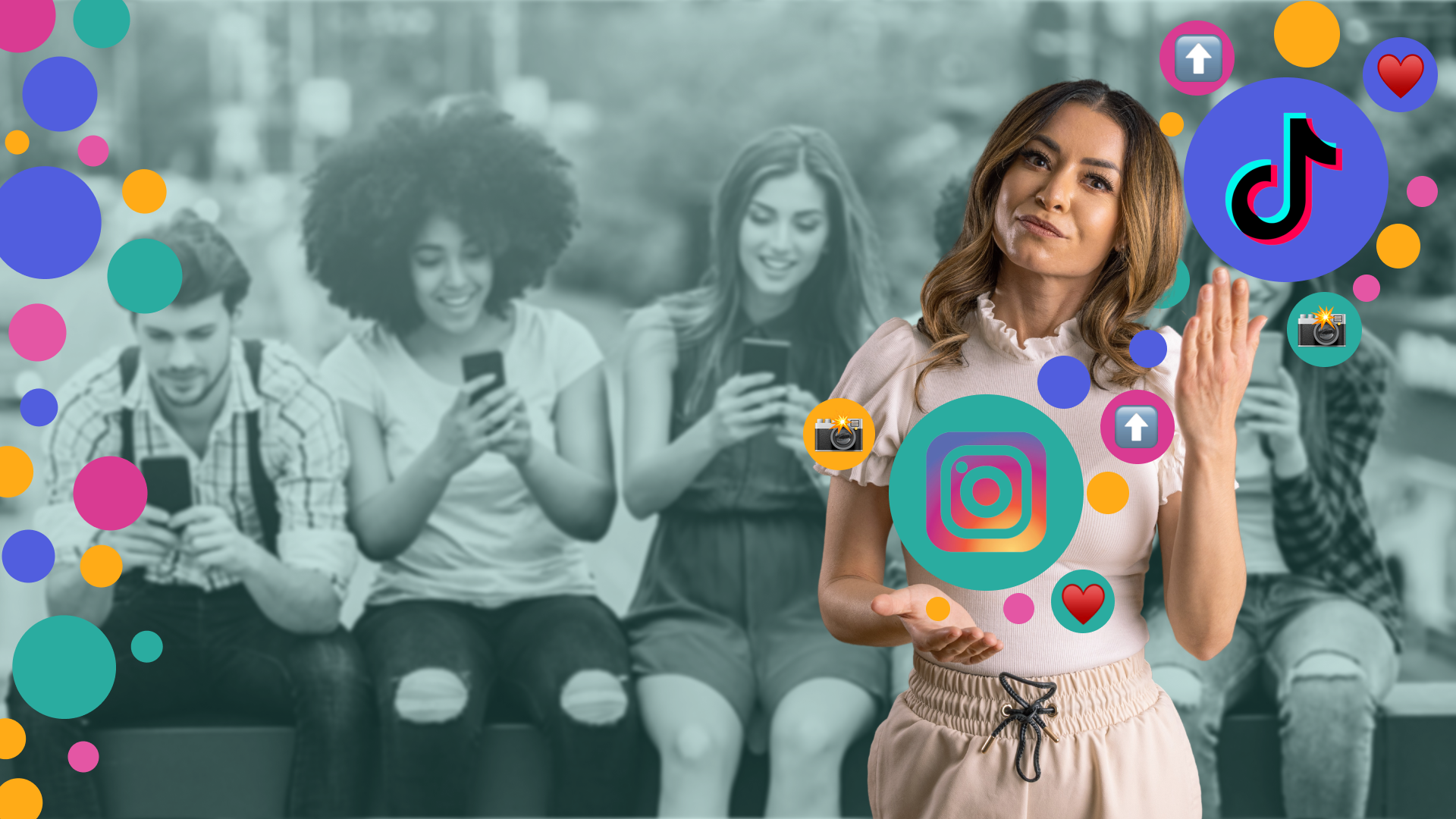 If you work in marketing (and we’re betting you do), it seems there’s always a war between the members of our marketing mix. Content is king, but blogging is so last year. Facebook is dead, except for your relative’s constant check-ins at random locations. Instagram is dead, which to be fair, might not be totally incorrect if Kylie Jenner’s boycott gains traction.

So, what does this mean for influencers? Well, let’s take a moment to refresh ourselves on what an influencer is. Nielsen defines an influencer as a social media user with over 1,000 followers or subscribers who exercises influence, on digital platforms, over digital users and audiences.

Influencer marketing is one of the most striking marketing innovations of the last five years, as brands flock to make the most of viral word-of-mouth. And the love of influencers is backed up by real profits. Here’s a selection of stats you need to know about, about influencers and the space in which they operate.

Clearly there’s a lot to be said for influencer marketing, but where does TikTok fit into all of this and what does it mean for Instagram? It seems short-form snackable video content is the perfect remedy to our short attention spans. After it rebranded in 2018 from Music.ly to everyone’s favourite clock app, the platform has seen a major boom.

While 72% of influencers are currently using Instagram as their primary content channel, savvy content creators develop a presence across several digital platforms. Almost 80% of TikTok’s top influencers are aged 18 to 34 years old and over the last 12 months, the platform saw a 481% increase in engagements.

Of course, none of us have been able to escape the impact of #TikTokMadeMeBuyIt, the popular hashtag that has had over 7 billion views to date and is responsible for the massive shift in consumer products, from books to coffee. A quick search of the hashtag on Amazon will bring up a wealth of products and recent bestselling books, proving the value of this platform as a purchase influencer.

In this blog, we’ll be exploring the rise of the TikTok influencer and brands getting influencer marketing oh-so-right. Plus, we’ll be diving into our usual breakdown of what the TikTok (and importantly, the #TikTokMadeMeBuyIt) audience is actually made of. Let’s go.

Who is spending time on TikTok and what makes them tick?

To answer this question, we ran an affinity report based on people who identify as TikTok users online to understand who makes up the online TikTok audience and ideally, what influences them.

Our overall audience data confirms what we already know, that the TikTok audience skews young with 18–24-year-olds making up almost 40% of the audience. It also shows the gender split is almost 50/50, with men making up slightly more of the audience than women. Many of these users are highly interested in society, education, movies and TV, and music, and as a whole, social media is the number one purchase influence.

TikTok is exceptional in that it is a truly global platform, thanks to its origins in China, which shows in location data. Top ten countries for TikTok users include the US, the UK, France, Indonesia, Philippines, Brazil, Mexico, Canada, Spain and Australia. While 50% of users are English speakers, Spanish, French and Japanese all appear, suggesting that brands with an international presence have the potential to run highly targeted local campaigns on TikTok.

If you’ve read our previous sector spotlight pieces, you know that your audience is not a monolith. That’s why we’re all about breaking chunky audiences down into snackable segments. Our reports can produce up to twenty segments but today, we’ve removed a whole bunch of them to focus on the top four most interesting segments. 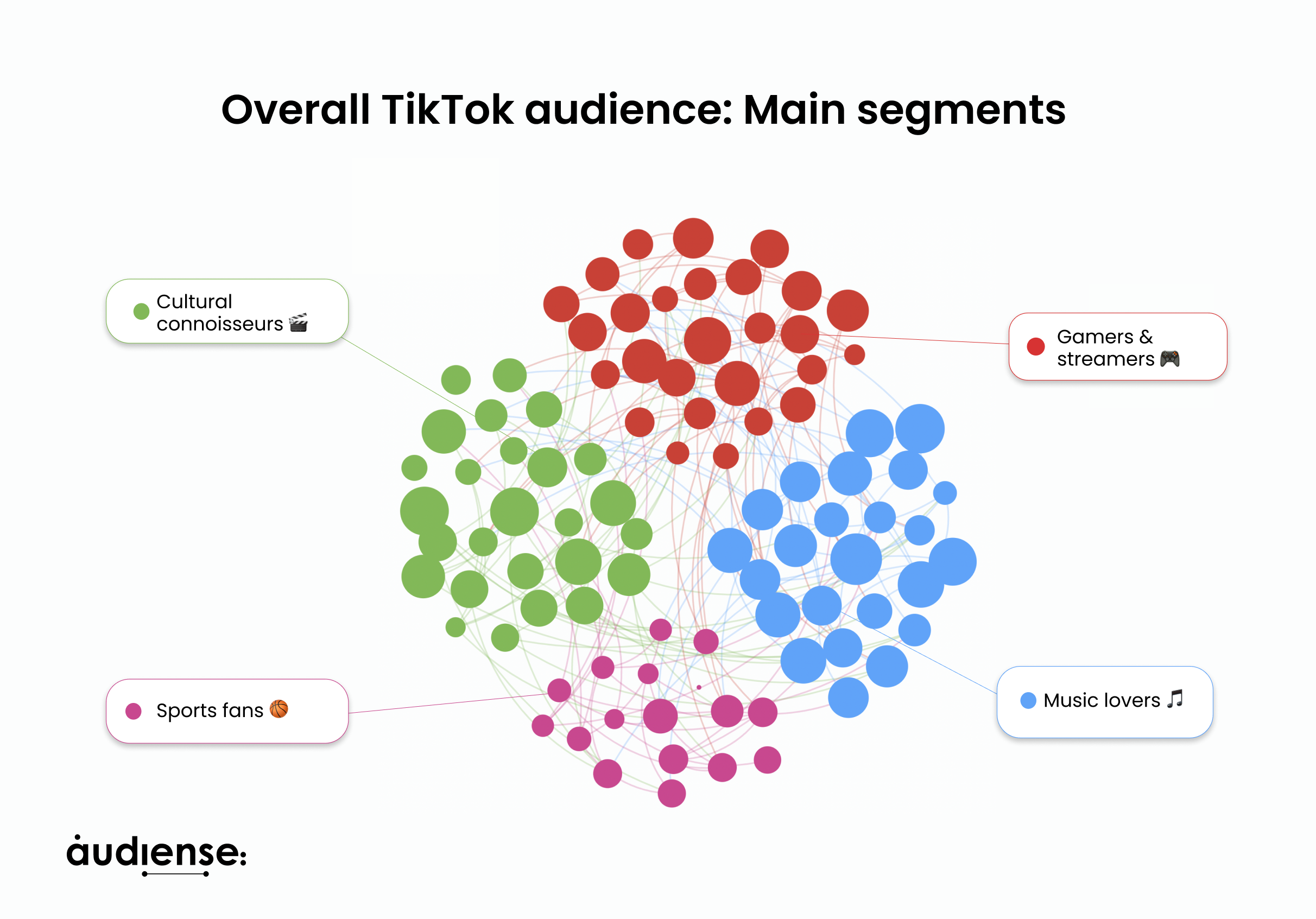 Which brands are successfully tapping into TikTok influencers?

We’ve seen the data, we’ve explored the origins and impact of TikTok, now it’s time to examine the brands who are absolutely killing it on the platform using influencer marketing. Here’s a selection of the best brands we’ve seen using influencers to amplify their campaigns and reach new audiences.

Hailed as one of the most viral campaigns ever on TikTok, Elf Cosmetic’s #EyesLipsFace challenge went truly viral thanks to unprompted interactions from celebs such as Ellen DeGeneres, Lizzo and Reese Witherspoon.

They commissioned a song specifically for TikTok, based on Kash Doll’s 2018 hit ‘Ice Me Out’. The brand clearly understood the TikTok’s audiences’ passion for earworm sounds and dance challenges, capitalising on the music lover segment to create an innovative campaign that spread organically. They were also able to link the campaign to a key brand pillar: ‘e.l.f. is for every eye, lip and face’.

Once they had their song in the bag, e.l.f. hand-picked a small number of influencers to start seeding the campaign on TikTok. As awareness grew, so did user-generated content and excitement. The hashtag clocked up 7 billion views and over 5 million user-generated videos… and celebrities started to join in the fun. It became so big in fact, that the brand collaborated with a record label to create an official music video.

It didn’t end there either. According to agency Movers+Shakers, who worked on the campaign alongside e.l.f., the buzz around the challenge led to 1.5 billion of earned media impressions, the song took the number four slot in Spotify’s Global Viral charts and it was the first-ever brand ad to hold the number one trend spot on TikTok.

Speaking of ground-breaking TikTok activity, in September 2020 American coffee and baked goods chain Dunkin’ became one of the first brands to tap into influencer marketing on the platform by working with rising star Charli D’Amelio. At the time, Charli was the most followed TikTok influencer on the app, famous for her dance moves.

@dunkin So official, we put it in writing @charlidamelio. Order 'The Charli' on the Dunkin' app!🙌 #CharliRunsOnDunkin #TheCharli #Dunkin ♬ original sound - Dunkin'

Dunkin’ worked with Charli to launch their new menu items, including her go-to order of whole milk and caramel swirl, which they named ‘The Charli’. As an extra incentive for Dunkin’ and Charli fans, they also gave bonus loyalty points to customers who used their app to order The Charli.

This influencer marketing campaign was a huge success for Dunkin’, causing a 57% spike in app downloads and a 20% sales boost across all their cold brew coffees. They also made the campaign go further for Charli stans, offering digital opportunities to capture exclusive Charli content in the form of a special AR Instagram filter, stickers, and a dance challenge linked to an original song they created.

@dunkin Song is straight 🔥. Show us your moves to 'The Charli' while you drink 'The Charli'- using #CharliRunsOnDunkin @charlidamelio #dunkin ♬ The Charli - Dunkin'

Fortnite used their entry into TikTok with a fan-focused challenge to help them boost awareness and an awesome prize – the chance to have your original dance move immortalised in-game as an emote! If that wasn’t enough, they sweetened the pot with 25,000 in-game currency and a Fortnite VIP package.

Dropping into Emote Royale with my new emote! Enter the contest and you could get your own emote too. #EmoteRoyaleContest @FortniteGame @tiktok_us https://t.co/7ECMjAF5Ed pic.twitter.com/N6rgxcZfJB

To kick off the challenge, they enlisted Fortnite community creators Jordan Fisher and Pokimane, capturing content with them and adding their emotes to the Fortnite Item Shop ahead of the launch. From there, excitement snowballed pretty quickly.

can't believe i'm saying this, but i officially have my own @fortnitegame Emote! 🤯🥳 it's available at 4PM PT tomorrow if you'd like to get it! #EpicPartner

P.S - you can also enter to have your own in-game emote by submitting a dance via @tiktok_us with #EmoteRoyalecontest 😁 pic.twitter.com/HItsUD3B7x

To date, the hashtag has been used over 250 million times. The brand also made the most of the wealth of user-generated content at their fingertips, using videos to create paid advertising compilations and further spread the reach of the campaign.

This @tiktok_us ad by @FortniteGame is genius (as is the entire campaign). Gives everyone the opportunity to have their own character in the game. pic.twitter.com/0CdKZ9x6VG

After making waves on Instagram with innovative influencer marketing over the last few years growing their value to £100 million, Gymshark approached TikTok with the same level of motivation. In just three years, they’ve been able to rapidly grow their audience to 3.7 million followers by tapping into the passionate fitness community.

@16vjm #gymshark66 before it starts - this is a sign. Let's do this together!! Follow me on my Instagram: 16vjm 💗 #viral #foryou ♬ black out days x another love DJ Lilli - DJ LILLI

They did this with the #GymShark66 challenge, which they’ve been running since 2019 and still gets huge engagement to date. This particular TikTok challenge is centred around the idea that it takes 66 days to form a habit, asking people of all fitness levels and abilities to make a change for 66 days and document it using the hashtag.

For the 2019 iteration, they partnered with six fitness influencers on TikTok to help them reach as many people as possible. The campaign hashtag had over 45 million views in the campaign period and helped inspire many more people to make a positive change. For the brand, they also got to enjoy some incredible outfit transitions and made themselves the face of gym clothing on TikTok.

How can brands use TikTok to amplify their influencer marketing?

So, what are the key takeaways for brands hoping to expand their reach into the world of TikTok? Here are our top tips for influencer marketing on the platform and how to make sure your videos are getting in front of your ideal audience.