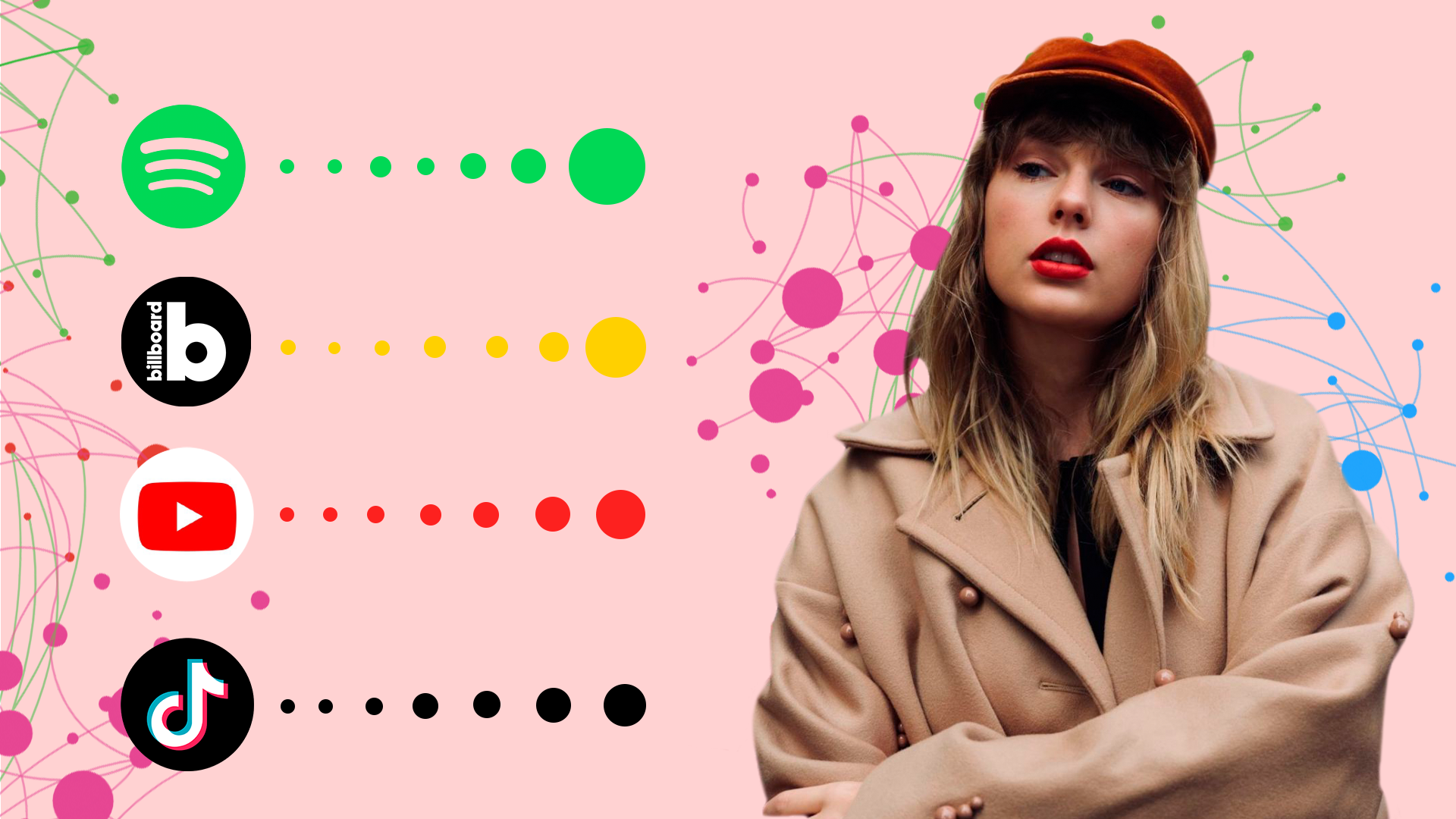 Taylor’s re-release of her classic 2012 album Red has been a massive global success by all means, and we felt it was deserving of its own Audiense analysis.

While you might attribute her success to luck or fate, it couldn’t be farther from the truth (before Red, she had record-breaking success with Fearless, her first re-recorded album). Taylor’s triumph is all in the strategy, and it stems from a deep understanding of her audience.

On November 10th, Taylor Swift entered the top 10 of Spotify’s U.S. daily chart, reaching No. 9 for a song she recorded in 2010! Swifties might remember her centerpiece ballad Enchanted off of the 2010 album Speak Now, which wasn’t promoted as a single at the time of its original release.

To date, Enchanted has clocked up…

You’re probably wondering, “How the hell did she do that?”

That, my friends, is the power of:

The good news? Any brand, big or small, can adopt the same principles Taylor has used time and again to become a master marketer.

In this blog, we’ll dig deep into the makeup of Taylor Swift’s audience and we’ll show you how her team leveraged audience intelligence to create one of the best multi-faceted marketing campaigns for an album the music industry has ever seen.

Our goal is to show you that by truly understanding your audience, you too can see levels of success that your brand has yet to unlock. So, grab a coffee and let’s dive in to learn how we can stop seeing Red when it comes to our marketing efforts and start feeling more enchanted.

Why understanding your audience matters for brand success

Brand success relies on crafting messages that resonate with your audience. But you can’t communicate effectively unless you truly understand them — and we’re not talking about creating generic Gen Z Sam or Millennial Mary buyer personas.

A thorough understanding of your audience sets your brand up for success and can help you achieve the following.

Save time, money, and focus on channels where your audience live

When you know who your target audience is, you’ll be able to create messages that resonate in the places they hang out. This way, you don’t waste time and resources on audiences or platforms that’d yield low results.

Why should you care about the social platforms your audience uses? A study conducted by audience intelligence platform Pulsar together with Twitter found that a 10% increase in brand conversation can lead to up to a 3% increase in sales. Imagine what such an increase could mean for your business.

Furthermore, understanding your ideal audience also helps you figure out which topics and values mean the most to them. Taylor understands this, and that’s why you’ll see her hanging out on Twitter and Instagram — platforms used by the majority of her audience.

For example, in a recent Instagram post, Taylor thanks and celebrates with her followers after All too well, the 10-minute track on the album became No. 1 on Billboard Hot 100. 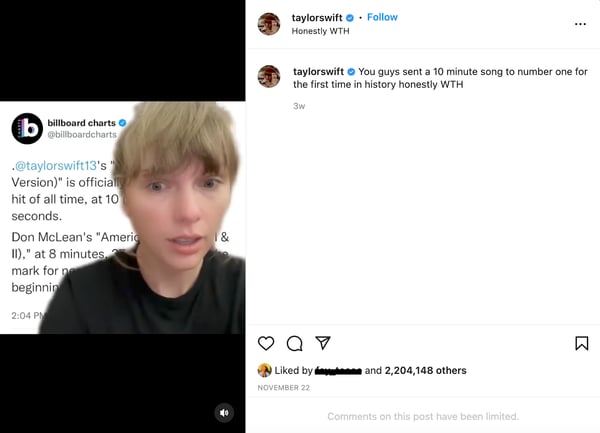 Your audience isn’t a monolith, which makes it essential to have different segments for each customer group. You can then create messaging for each group or segment to offer a unique experience.

For example, Taylor Swift appeals to her audience’s interest by leaving clues and Easter eggs about her upcoming albums on her social media pages.

When announcing the release of Fearless (Taylor’s Version), Taylor and her marketing team cleverly capitalized certain words that spelled out APRIL NINTH — which was the eventual release date for the album. 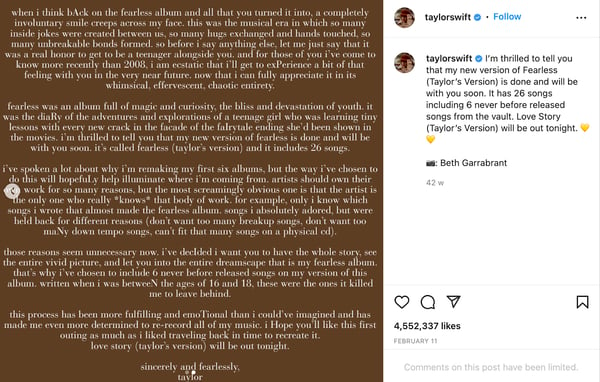 What can you learn from this. You’d be doing your marketing campaign a disservice by putting all of your audience into one category. Instead, use data to truly understand your audience and communicate in a manner that resonates with each group.

A quick report from Audiense shows that out of Taylor’s audience:

Many of these people were likely fans of the original Red album. As such Taylor and her team were not just building an audience from scratch, they knew what the fans already liked.

In terms of demographics, this report suggests that Taylor’s audience has a nice balance between the older and younger generations. 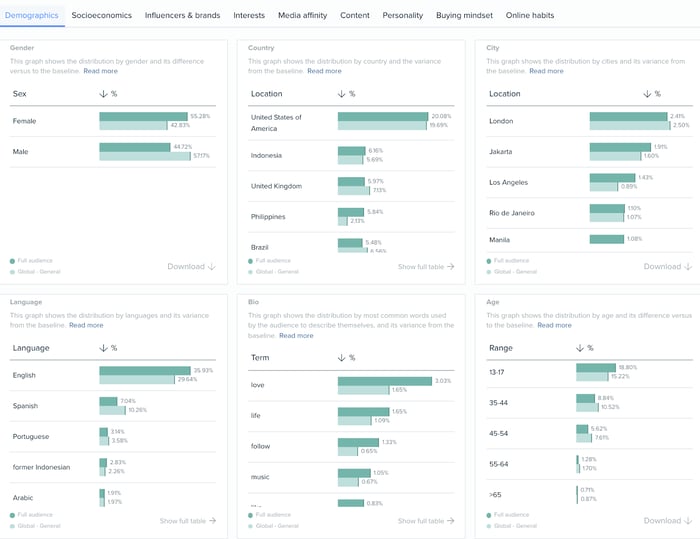 While most of Taylor’s audience live in the United States, there’s still a significant number of them that live in places like Brazil and Mexico. 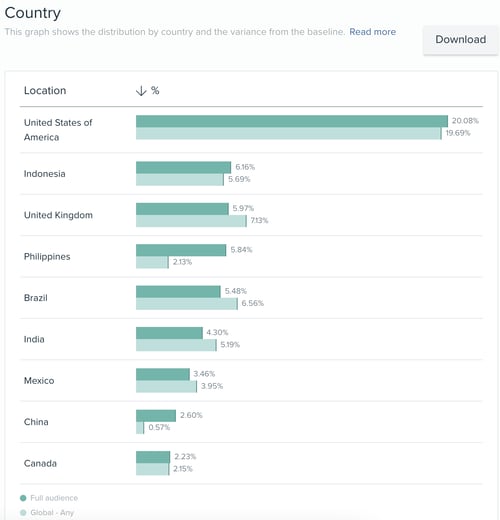 How did Taylor and her team make good use of this data?

For her collaboration with Starbucks to promote the Red (Taylor’s Version) album, Taylor didn’t limit the campaign to the United States. Instead, the promotion went as far as Mexico and other countries where her fans live. 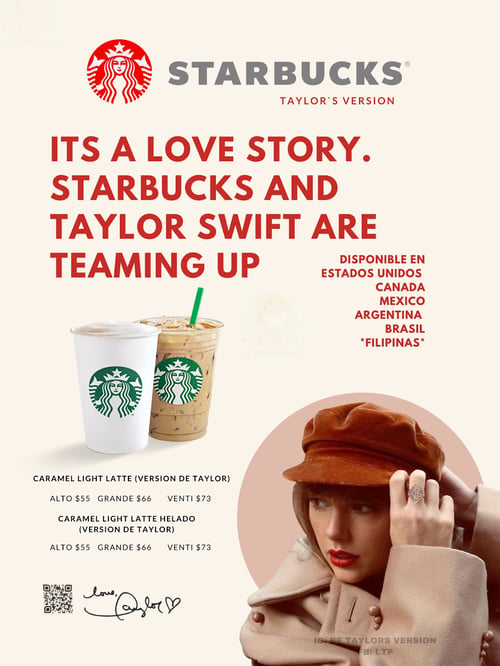 Taylor and her team capitalized on her audience’s frequent social media use to push the Red album release.

For example, here’s a tweet from Taylor announcing that she’s now on TikTok. 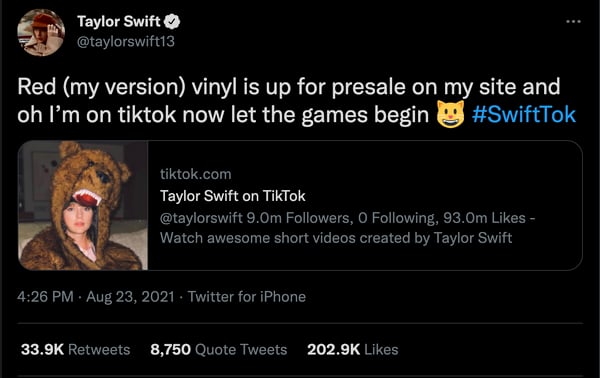 Later on TikTok, Taylor let her fans know all songs were available as sounds and encouraged them to use them by saying, “I can’t wait to see what you create.” 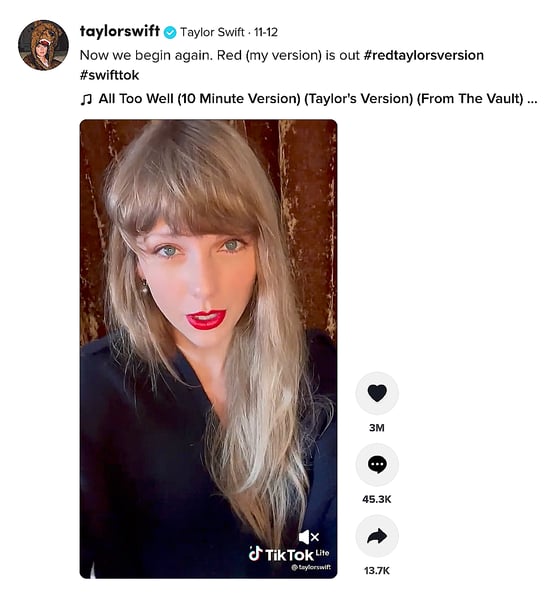 Considering that many people in her audience are interested in fitness and sports, it made sense for Taylor to partner with Peloton to promote her album re-release.

Here’s the Instagram post from Peloton, announcing the partnership with Taylor Swift — the perfect Christmas present for fitness-obsessed Swifties looking to squeeze in a workout over the holiday period and beyond.

Defining your niches and why it matters

It would be easy to generalise and claim that Taylor’s primary audience is women aged 18 to 35. Without the data to back you up, your marketing efforts are destined to fail. You need to tap into the data to truly understand segments within your audience to create campaigns that have real impact.

Here’s what data tells us about Taylor’s main audience segments: 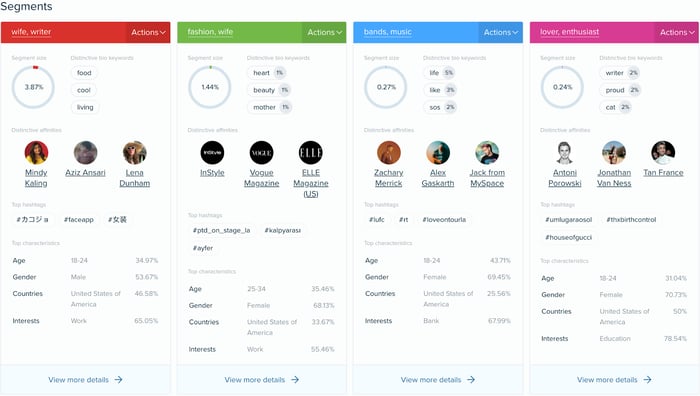 To build hype and engagement for each of her core audience segments, Taylor created targeted marketing campaigns. Let’s consider how she catered to her various niches/audiences and how that ultimately helped strengthen the launch of her re-recorded albums.

One of the most basic audience segmentation methods is to group your audience based on their demographics — such as their age, gender, and location.

Since Taylor has an audience with a wide demographic range, she created different content pieces that resonated with each group within the same audience.

Her older audience is not left out, as she had televised appearances on late-night shows like NBC’s Saturday Night Live and talk shows like The Tonight Show Starring Jimmy Fallon.

Another great way to segment an audience is by focusing on their interests. How did Taylor do this with the Red album?

Given that her fanbase is predominantly female, Taylor tapped into their interest in fashion and style by making her red lipstick and scarf a major part of her marketing.

And what was the result?

Searches for “Taylor Swift red scarf meaning” spiked by 1,400 percent on Google (because she is wearing one on the album art for All Too Well (10-minute version).

This extended into “beauty searches in general,” with searches for “what red lipstick does Taylor Swift wear” increasing by 800 percent.

Aside from capitalizing on her audience’s fashion interest, Taylor also partnered with her famous friends, like Blake Lively, who directed the I Bet You Think About Me (Taylor’s version) music video.

Inviting her celebrity friend to direct the music video creates a halo effect that not only extends her music to new audiences, but also increases her brand authority and credibility.

While you might not have Blake Lively’s cell number, you can identify partners who fit your vibe best to reach a broader audience more efficiently.

Meet your audience where they hangout online

Brands that build communities are the ones that win and Taylor has successfully done that over the years with her superfans. However, as new platforms emerge, it’s essential to learn how you can leverage them to continue to engage your audience.

In recent years, TikTok has grown in popularity and has been a real booster to make songs go viral. Taylor and her marketing team understand this, and they’ve really taken advantage of it. 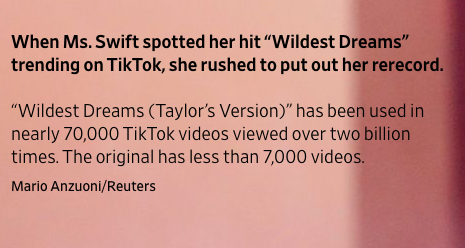 The trend seemed to be encouraged by Taylor herself just a couple of days before it took off. In one of her TikTok videos, Taylor was seen painting her nails red to hype up her Red era, and you can hear Wildest Dreams playing in the distance. Cut to the slow zoom of Taylor in a blue dress, reminiscent of her 1989 era, and the rest is history.

What can you learn? Study your current customers and audience to uncover what social media platforms they use the most, the kind of content they like to consume, and so on.

Taylor Swift leveraged her knowledge of her audience’s core segments to make her album re-release a groundbreaking success. You, too, can do the same for your campaigns.

Here are the key takeaways you can learn from Taylor’s re-release strategy:

Love or hate her, whether you’re a brand, a marketer, or just a listener, you have to respect her. Taylor Swift is a walking marketing masterclass, and it comes down to deeply understanding what her audience values. Mix that with the offline connection she builds with fans at in-person events, and you’ve got a brand that can weather the toughest Twitter storm.

Sign up for free to get the most of our Audiense Insights platform to understand your audience better and uncover new opportunities to create unique engagement experiences with them.

Previous Story
← A look back at 2021
Next Story
New Year's resolutions: What should be on your marketing radar for 2022 →