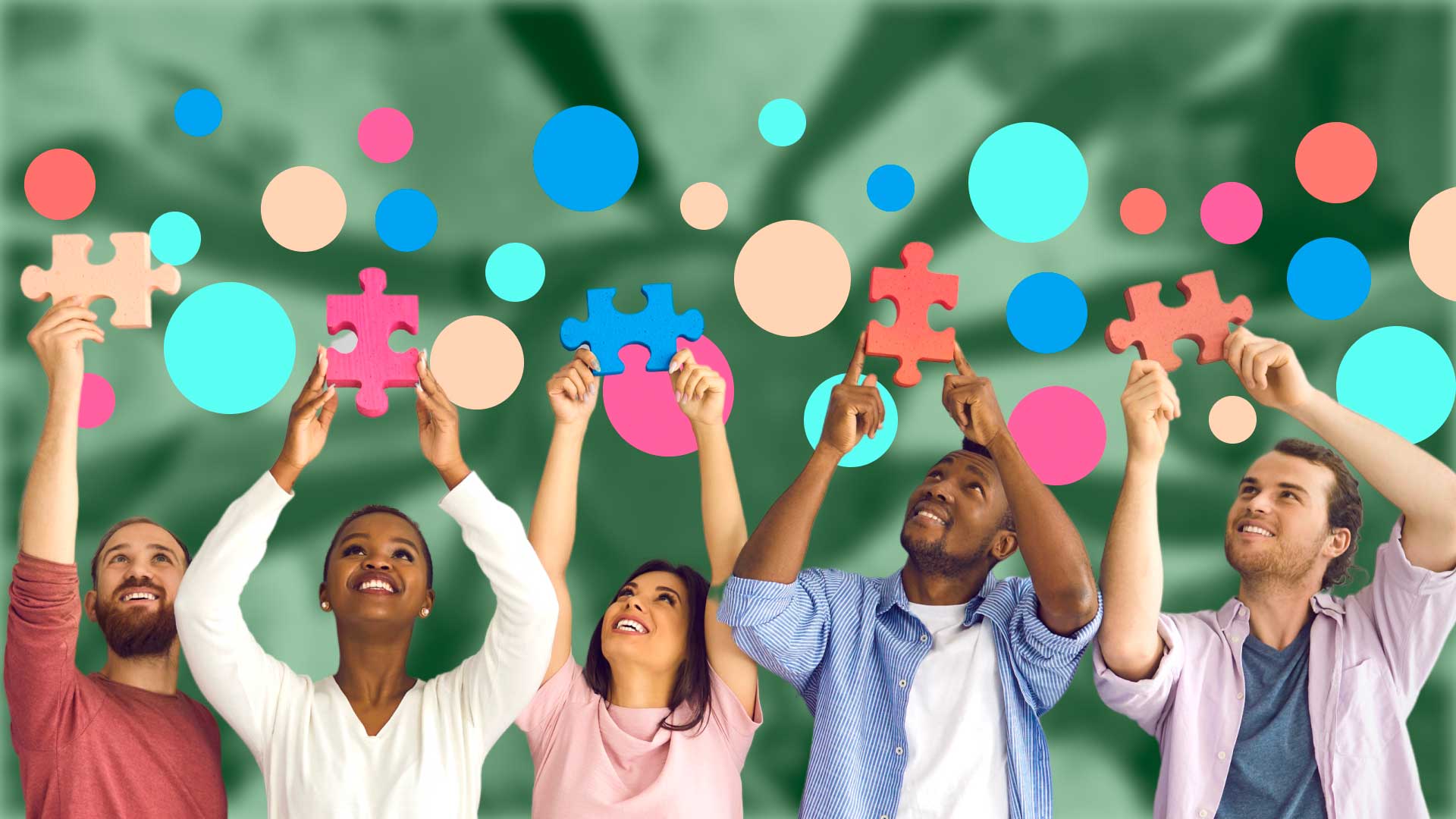 With the 2022 FIFA World Cup about to kick off, we wanted to take a closer look at how brands can use major sporting events to connect with consumers in a changing climate – both economically and ecologically.

While the pandemic disrupted the way people consume content, the emergence of new marketing channels has made audiences more accessible than ever. But that doesn’t mean more traditional activity such as sponsorship is becoming less effective.

Let’s take a look at the current state of play for sustainability, brands and consumers:

It’s clear that with the right message and the right partner – be that an event, a team, or an influential athlete – sponsorship can help you connect with your desired audiences. But amid accusations of ‘sports-washing’ last year, sports properties have been under pressure to end their deals with high-carbon polluters. Consumers want to see their favourite teams, and brands that collaborate with them, walking the walk and committing to their public pledges around sustainability and the climate crisis.

So how can brands achieve this? In this blog, we’ll be tackling how brands can connect with consumers in a changing climate, with examples from Adidas, Disney, and Hyundai. P.S. Don’t forget to share with your marketing friends!

How are sports fans engaging with sustainability?

Creating successful sponsorships and campaigns around major events is all about understanding your audience.

To explore how sport fans are engaging with sustainability, and the brands they find influential, we created an affinity report which searched for conversation around the following terms: @FIFAWorldCup, #FIFAWorldCup, @FIFAcom, “FIFA World Cup” and “green card” (the name of FIFA’s ongoing sustainability pledge). You can check it out here.

Looking broadly at this audience of football fans, we can see that that it’s largely made up of men who account for around 80% of the total audience. We can also see that this audience skews fairly young, with the 18- to 24-year-old audience accounting for almost 40% of the total conversation. English is the most commonly spoken language accounting for about half of the audience, but we also see Spanish, French, Arabic and Portuguese appearing in languages spoken.

Perhaps most interestingly, this audience is extremely vocal about their passion for football, with ‘fan’, ‘football’ and their favourite team names (i.e., ‘chelsea’) appearing in biography keywords. We also see many Premier League teams, players and pundits appearing in influencers and brands, as demonstrated below. 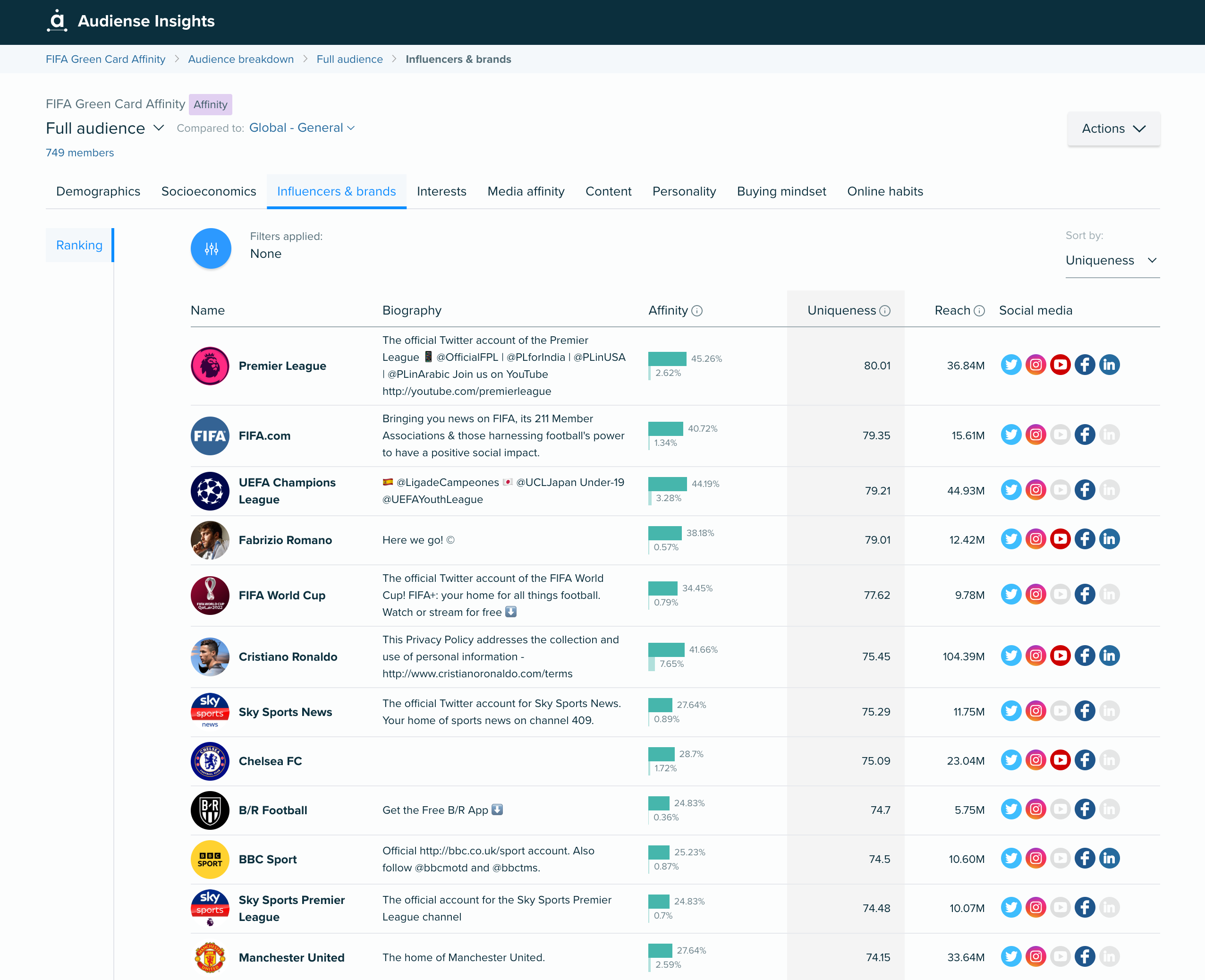 As our regular readers know, your audience is not a monolith. Our football audience breaks up beautifully into four distinct segments, so let’s get boots on the ground and figure out the score. 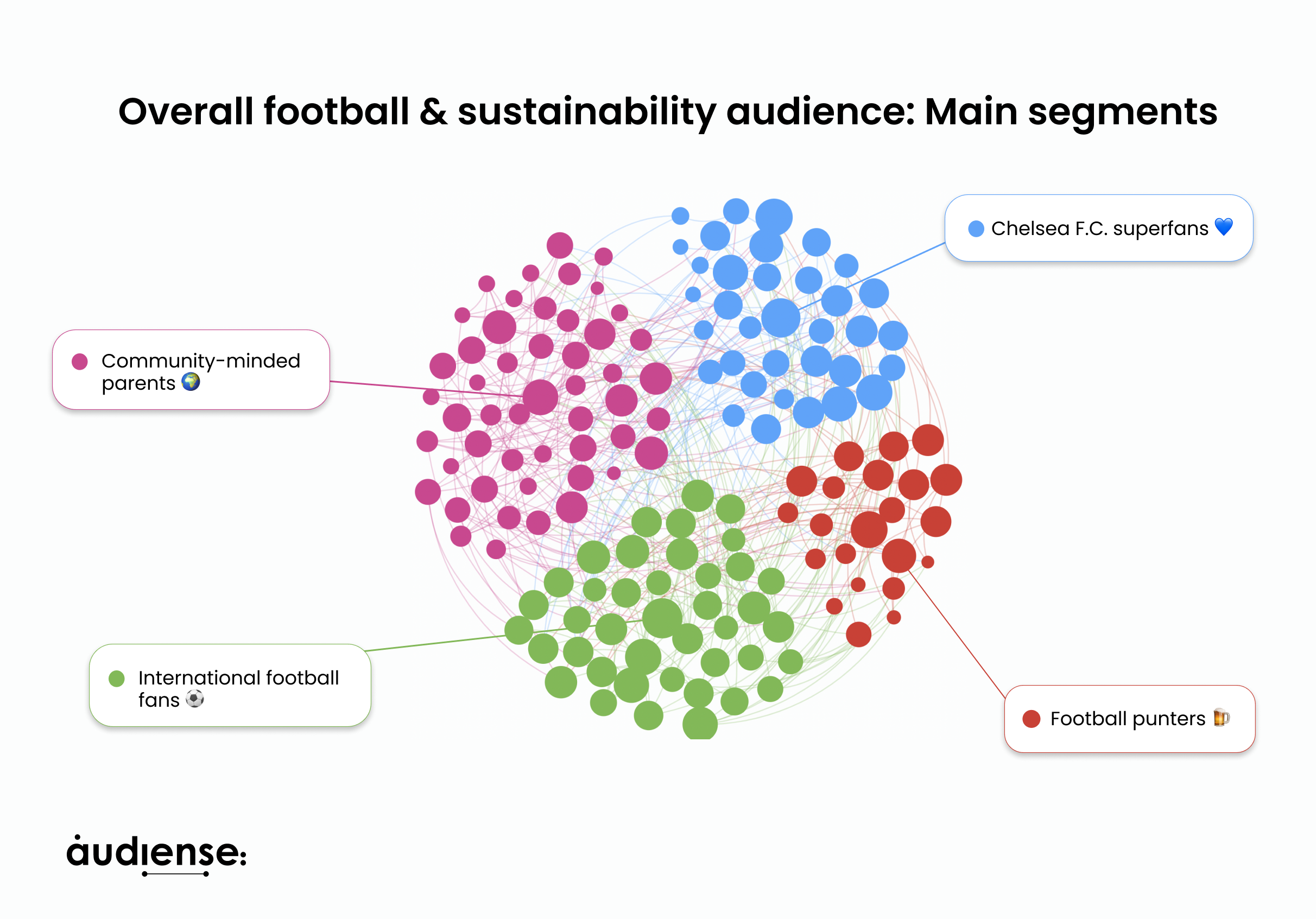 How are brands building sustainability into their marketing?

So, we’ve gotten to know our sports and sustainability audience a little better. Many of them are switched on about climate change and interested in societal and global issues. With the World Cup just around the corner, we wanted to know how three of the main sponsors – Adidas, Disney and Hyundai – are building sustainability and diversity into their campaigns.

One of the World Cup’s biggest sponsors Adidas has been leading the charge on sustainability in sport for several years now. Responding to the growing consumer demand for sustainably sourced materials, Adidas has taken major steps toward low-carbon practices, including footwear made from recycled ocean waste, and leather created from mushrooms.


To promote awareness of their efforts and talk directly to their intended consumers, Adidas launched ‘It’s Not Easy Being Green’ last year. This campaign featured a 60-second ad spot promoted on TV and social media which featured beloved icon Kermit the frog talking about how overwhelming it can feel to tackle challenges like climate change with Adidas ambassador and tennis legend Stan Smith. And to top it all off, they put Kermit on his very own shoe.


This campaign marked a major moment for the brand, as they revamped their signature shoe – the Stan Smith – to feature Primegreen materials, Adidas’ new exclusive recycled materials. In addition to bringing Kermit on-board, Adidas also tapped into their influencer connections to roll out other green icons on their sneaks including The Hulk, Groot and Monsters Inc. Given that our audience research has shown young people feel strongly about sustainability and are likely to be more engaged with the conversion around it, Adidas’ move to combine sustainability with beloved characters from comics and screen holds huge appeal and social media potential.

I know it's not easy being green, but a Greener life is always the best choice

The new Stan Smiths are Primegreen, meaning it is made from recycled materials.
It also features your favorite green Disney characters! I got the #GROOT pair.#stansmith #STANSMITHFOREVER @adidas pic.twitter.com/BK8fHrTq57

Speaking of beloved characters, you might be surprised to learn that Disney is one of the lead sponsors of the England team for this year’s FIFA World Cup. But the US-based entertainment giant has a long and storied history of working with the Football Association (FA) to encourage women and young girls to participate in sport.


In 2017, Disney launched their #DreamBigPrincess campaign in collaboration with the FA, which centred around the England women’s team. Members of the football team appearing in promotional videos to share their stories and talk about challenging what it means to be a modern-day princess. The campaign sought to inspire young women to embody values such as confidence, determination, and fearlessness in pursuit of their sporting dreams.

Shoot for the stars like @England Women's Football team. 🙌🏼
Will you be cheering for the @Lionesses today? ⚽️ #DreamBigPrincess #WEURO2017 pic.twitter.com/MldeMrqaOI


This campaign was part of a wider global initiative, in which Disney invited 19 female creatives from around the world to capture images of strong female role models. This included women from STEM, athletes, authors, and Olympians, to shine a spotlight on a diverse range of empowering stories and encourage girls to dream big.


As we saw from our segments, encouraging diversity in sport is a key concern for many football fans. And given that our community-minded parents are likely to be watching the big game with their children, Disney’s ongoing efforts with the FA and other sporting partners to bring women into football successfully smashes stereotypes.

Turning our attention back to the 2022 World Cup, automotive company Hyundai are on a mission to launch the ‘Goal of the Century’ this winter. This campaign connects with the consumer desire to see brands tackling climate change, with an overarching mission to “build a sustainable and united world”, supported by multiple engagement programmes that will run throughout the event.

Have you met the complete #TeamCentury yet? All of them are ready to score the #GoalOfTheCentury for a better future. Become our supporter and join us on our journey – to create a united world for sustainability!


The main crux of the campaign is a consumer-facing social message. Hyundai are asking people to join the #GoalOfTheCentury online by submitting a pledge to perform a sustainable action if their favourite team scores a goal at the FIFA World Cup. Clearly, the brand has decided to go big or go home, as they’ve recruited no less than K-Pop boyband sensations BTS to help spread the message.


In collaboration with Hyundai, BTS have released a new version of their popular song called Yet to Come, announced with a music video on the Hyundai Instagram account. The new version features lyrics which promote sustainability, and football fans are being encouraged to sing it at upcoming games. Plus, Hyundai have launched a TikTok challenge around the hashtag #TeamCentury12, asking fans to post their own dances.

I LOVE THISSSS GO WATCHHH YET TO COME IS SO PERFECT FOR THE GOAL OF THE CENTURY I SWEAR#HyundaixBTS
pic.twitter.com/lDESd2Ggfl

@hyundai_worldwide Do you want to be one of us? Join the #TeamCentury12 challenge now! #TeamCentury12 #GoaloftheCentury #Hyundai #HyundaixBTS #FIFAWorldCup @BTS ♬ Yet To Come (Hyundai ver.) - BTS


What can you learn from World Cup sponsors?

As Adidas, Disney and Hyundai have all demonstrated, there’s a lot more to sponsorship than paying the fee and plastering your logo on everything. Brands need to focus on creating holistic campaigns with authentic messages that will connect with audiences online and offline. Here are some of the key takeaways: