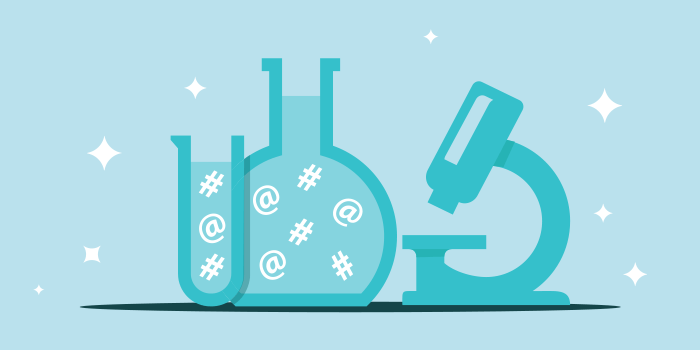 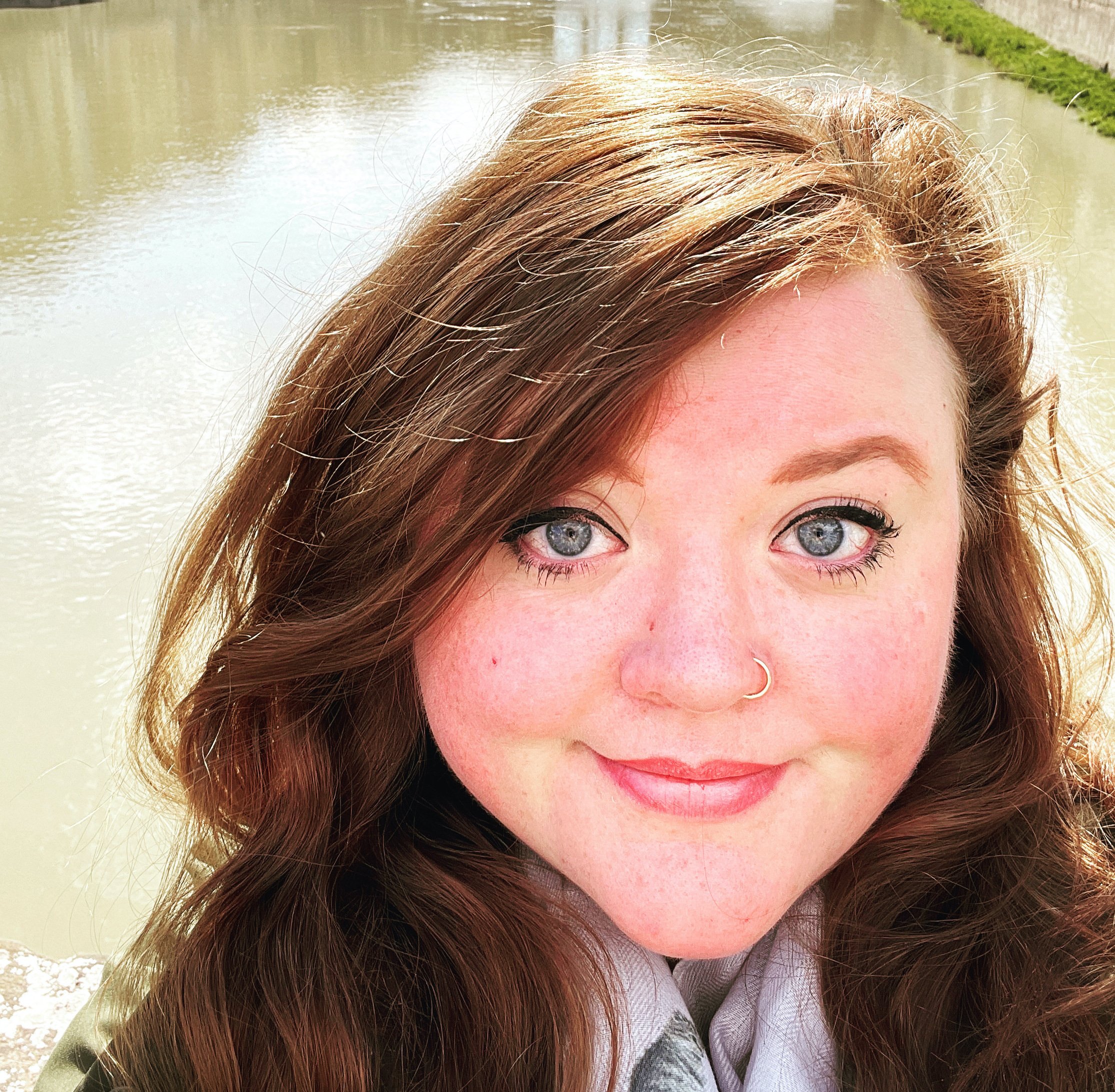 You’ve got your microscope at the ready, your lab coat and protective goggles on and you’re staring into a sea of data that could help change your marketing strategies for the better. So what now? With some clever Twitter data analysis tips, you can apply your data analysis findings to your Tweets, campaigns, and Twitter marketing strategies. Allow us to take the guesswork out of Twitter data for you! Take your data analysis skills to the next level and optimize your Twitter activity with our six pro tips for using the Twitter Analytics platform and Audiense in harmony.

1. Use Twitter data to further define your buyer personas.

With the right tools Twitter data analysis can help you gain insight into your current Twitter community, which can be used to help you outline and define your target personas. Applying Twitter data analysis techniques to a Twitter community opens the additional insight into the type of people your Twitter marketing is attracting and help you further define their profiles with information such as; what they’re interested in, where they’re located, and more.

Twitter Analytics - accessible to all Twitter users - can show you the percentage of followers with particular interests, based on what they Tweet about (see the image below). 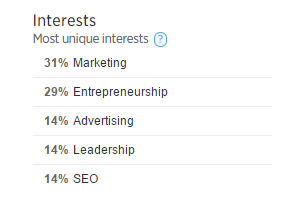 Thanks to Twitter Analytics, we now know that 31% of our Twitter community are interested in marketing. This information can be taken, and cross-referenced with the ‘Followers Bio Tag Cloud’ in Audiense. This data is gathered from the Twitter bios of your followers, and shows you the most common keywords cropping up among your community, to help you build personas of the users you’re interested in targeting.

Combine this new insight from both Twitter Analytics and Audiense for precision targeting. Search using these keywords and add new users to a list, or target them as a tailored audience in your next campaign. Using Twitter data analysis to fine-tune your targeting ensures you’re connecting with Twitter users that could have a real interest in your business and are more likely to become a customer.

2. Analyze the reach of your Tweets to discover when your community is online.

The best way to optimize the engagement of your Tweets is to find that magic time when the majority of your community are online! After all, what’s the point of Tweeting if there’s nobody around to see it? To achieve maximum exposure of your content, you need to know more about how many people your Tweets are reaching, and when your Twitter community is online and adjust your Tweeting schedule accordingly.

Twitter Analytics gives you a general overview of how well your Tweets are performing in terms of impressions (see image below) and engagement. Impressions indicate how many times your Tweets appear in a user's timeline and can be seen. This bar chart of impressions over the last month gives you a good indication into how your content is performing, and areas for improvement. We can see here that impressions are poor at the weekend: is this because people aren’t there to engage with it or because you don’t Tweet at the weekend? Making changes to your Tweeting schedule based on this data could improve exposure and impressions.

The data from Twitter Analytics offers an idea of your potential impressions over a period of time. On Twitter, timing is everything to ensure that your content doesn’t go to waste. Audiense can dig deeper into the behavior of your audience and provide a personalized Best Time To Tweet based on your top followers. You can export this information directly into Buffer or Hootsuite to automatically adjust your content schedule to post at the best times throughout the day. Using the Best Time To Tweet tool to cleverly plan your content schedule allows you to optimize your reach and potential impressions.

3. Find new Twitter users to target and engage with.

Applying Twitter data analysis techniques to a Twitter community opens the door to new followers. Not only can you use Twitter data to further define your target personas, go that one step further and gain more followers by targeting users of similar interests to your current community.

Twitter Analytics outlines the accounts your followers are also following. Use this insight to find new, relevant, Twitter users to target and engage with. 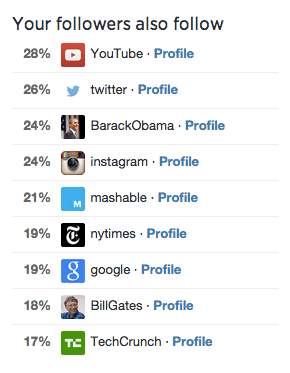 Plug this new insight from Twitter Analytics into Audiense, ie. add the accounts as ‘Sources’ for you to analyze, for precision targeting. Search using these keywords and add new users to a list, or target them as a tailored audience in your next campaign.

You hit the jackpot and your Twitter Ad campaign was hugely successful, getting tons of retweets. Why stop there? Did you know that only 10% of Twitter users follow a business after engaging in a Twitter Ads campaign? Take your successful campaigns to the next level and reach out to all the users that engaged with the Tweets to follow-up and capture their interest.

Twitter Analytics is able to show you information about how well your campaign is performing in terms of impressions, clicks, retweets, replies, followers, and engagement rates (as shown below). Low engagement might suggest that you need to tweak the wording of your campaign, make your copy more engaging, or promote your Tweets more widely.

You’re able to see who retweeted your content just by looking in Twitter, however, Audiense has a tool called Discover Retweeters, which can give you a whole host of information about the users behind the retweets - saving you time and effort when following up. Let’s say we want to find out about the Twitter users who retweeted a particular Tweet to target them with more relevant content. We need to look under the Target section of Audiense and choose ‘Discover Retweeters’. Then enter either the Tweet URL or ID (the sequence of numbers at the end of the URL) and hey presto, you can then view a dashboard of information specifically about that Tweet and the users behind it. Hone in on important information like where the users are located, how many of these people already follow you, and most importantly: who doesn’t and how can you reel them in? 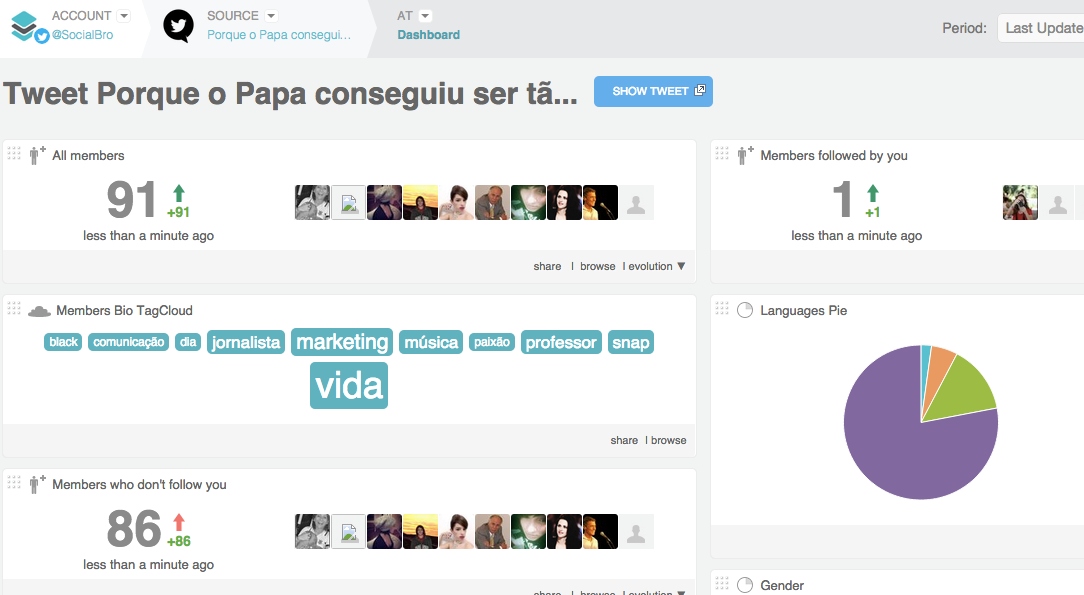 Click on the ‘Members Who Don’t Follow You’ panel to highlight users that have engaged in your campaign but do not follow you. Are they relevant to you? Add them to a tailored audience list to target in your next campaign, or tag them to monitor further activity, or simply engage with them by sending a Tweet thanking them for sharing!

Use Twitter data analysis techniques to find out what content really resonates with your online community. Tailor content to suit different segments of your audience based on your data analysis, additionally use this information as a basis to create marketing campaigns that appeal to your target audiences.

Again using the additional insight that Twitter Analytics offers you can see the top interests of your followers, based on what they Tweet about. 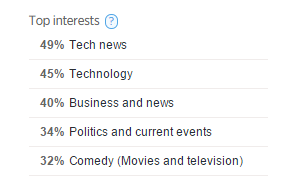 Audiense can show you detailed information about what your followers talk about, the top hashtags they use, and even the links they’re sharing. Combine the insights from Twitter Analytics and Audiense to further tailor your content to suit different segments of your audience.

Twitter Analytics and Audiense can work in harmony to help you monitor how well your Twitter Ad campaigns are performing or have performed overall. There are many ways you can gain better insight into the performance of your Twitter campaigns using both Twitter and Audiense, so here’s a brief overview of the most helpful ways to measure your campaign success.

Twitter Analytics can give you an overview of how well your Twitter cards (if you used a Promoted Tweet) are driving URL clicks, as well as their impressions upon users timelines.

Audiense’s Monitoring tool measures the success of a campaign by gathering historical, or even real time, data. Simply enter any relevant keywords, Twitter handles, hashtags, or even URLs and Audiense will scour through to return all the relevant Tweets. You can then access a comprehensive report detailing how many users engaged, potential impressions, number of Tweets sent around the campaign , as much more actionable data that can be fed back into Audiense for end-to-end campaign management and boosted ROI in future campaigns.


There’s so much more you can gain from analyzing Twitter data and feeding your findings into your marketing. Twitter data analysis offers a wide range of opportunities to your business, make sure you’re making the most of the ocean of data out there.

What else do you analyze Twitter data for? Let us know in the comments.