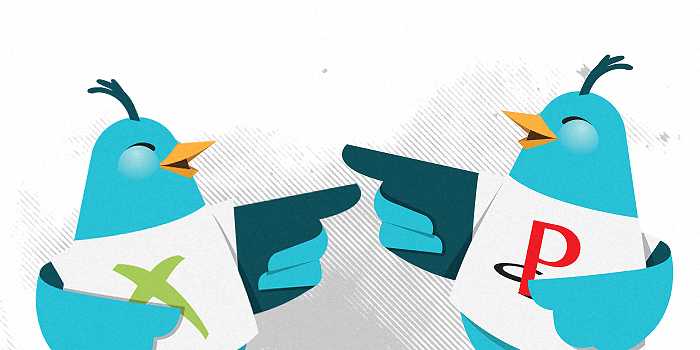 Hey guys! Your brand sucks! Just jokes, we love you! Brand ‘banter’ - when brands engage with each other in conversation on Twitter, in a light-hearted, humorous manner, perhaps even trading insults - is an increasing trend.

We reveal the brands who are masters of the art of banter, examples of when banter goes good and (hilariously)bad, and offer some advice for brand-on-brand banter tactics.

Once upon a time brands never talked to each other, at least not in public. Perhaps they’d exchange nods over a whisky-and-soda in the club lounge. But in recent years, we've noticed a rising trend of intra-brand conversations.

Sometimes these conversations are as friendly as those between two old geezers standing outside a falling-down old pub between pints of ale, puffing on their 16th Lambert & Butler of the morning.

#thatmomentwhen a simple breakfast becomes a not so simple mess, but a big mess… (@Bounty, you’ve got this, right?!) pic.twitter.com/tnPNz64lgb

BUT it’s not always so friendly. Some brands use topical events and trends to deliberately set out to pick fights.
Twitter is of course the ideal platform on which a brand can showcase its tone of voice and (develop) its personality. Those which are most successful at this are clever, quick-witted, and sometimes a little off-the-wall.

Just as it is standard social media marketing practice for brands to engage with their customers on Twitter in an almost throwaway informality, brands are starting to see the value of interacting with other brands in the same way. If it works, the reward for this engagement is the same as when it works with customers: it increases brand reach and exposure, it generates loyalty and advocacy.

While more corporate brands will play it safe, the rewards could be great for brands prepared to take the risk and push their tone from simply chatty and conversational to 'cheeky' (apologies for using this horribly over-used tone-of-voice descriptor) and even to the point where they are maybe 'crossing the line'. The thinking seems to be, 'it’s ok to push it, this is Twitter: this is how it works in this young and trendy channel'. Like many other social media marketing tactics, when it works, great, when it doesn’t, you pick yourself up and try again.

Orchestrated collaborative efforts between like-minded brands with shared values to achieve shared objectives are commonplace on Twitter just as in any other marketing channel, but it may come as a surprise when bitter rivals start complimenting each other. For example, Microsoft put its beef with Sony aside and, imbibing the spirit of Christmas Day 1914, tweeted Sony on the launch of PlayStation 4. Contrived? Yes, of course. But a PR masterstroke.

This forced Sony into the humiliating position of having to reciprocate the love (through gritted boardroom teeth) for Microsoft’s Xbox One:

The calculated brand love-in can be, like unavoidably witnessing a public display of affection, pretty sickly. Take Bud Light’s ‘aimed squarely-at-your-similar-demographic’ chat-up line to Samsung: as smooth as its finish, or a little sleazy?

We see you Samsung with that smooth finish... http://t.co/qvWxteqB9n

Whereas examples like these seem horribly staged, the banter can get really interesting when it becomes a sprawling, drunken conversation between whoever has been left the keys to the Twitter account while everyone else in the office has turned off their devices and gone home for dinner. It doesn’t harm to get a bit of PR if it gets picked up and called ‘Best Twitter Conversation You Will Read Today’.

@RiccardoEspaa7 We're Batman, you can be Robin.

Another example of Tesco Mobile’s use of this tactic is where it goaded the equally well banter-versed O2 in a public rap battle. Is this cool, or an embarrassing fail between two companies who just happen to do business with each other?

@O2 We wanted a rap not a nursery rhyme. Ya old news & we’re prime time. Get out of our way, ya holding us back, oh, & your service is Jack.

Showcasing your off-piste personality is all fine and good, but brand banter is at its very best when it’s not saccharine networking like this, but when it gets a little nasty. The finest exponents of this art are those who have the balls, the agility and the wit to poke a little fun, to start a social media scrap with another brand. It’s a risky strategy – a mis-judged swipe and a clever comeback could destroy you in the very public arena that is Twitter.

Whoever coined the term B2B would turning in their ideation room-themed grave at this playground spat between Old Spice and Taco Bell, both proficient pugilists in the arena of big business bants.

@OldSpice Is your deodorant made with really old spices?

Both come out of the fight well, but is it better to be beaten, bloodied and yet unbowed, or be boring? Even a fail will increase your reach and raise your profile if you’ve shown that your brand is game. Ok, that might not always be a good thing. That’s for social marketing bosses to decide. But for us onlookers, it’s fun to watch.

As a lesson in best practice brand banter, we’ll leave you with this quite bizarre gem between two London catering establishments (with social media accounts quite possibly run by the same person, but hey). We won’t see the like from Microsoft and Sony any time soon, but that would be fun, wouldn’t it?

@Mangal2 every hour at The Dolphin is happy hour. Bro, is it true that half your employees are at primary school?

Previous Story
← The Social X Factor: 7 ways to make your personal brand stand out from the crowd
Next Story
In The Spotlight: Taco Bell's social media strategy →