Hindsight is a fine thing, social media is even finer. Over the centuries, history has been full of scandal, drama and powerful people doing silly things. What if we threw Twitter into this turbulent mix? Well, we couldn’t resist. With a little creative licence, and some facts added for good measure, here’s what we dreamed up. Ever wondered what Henry VIII, Julius Caesar and the Spanish conquistadors might have tweeted about? Wonder no more. Check ‘em out.

Richard III & The Battle Of Bosworth

Infamous Richard III of England didn’t seem to know an awful lot about building strong relationships. He desperately needed the most powerful men in the land on his side, after he shocked everyone by stealing the throne from his 12-year-old nephew and chucking him in the Tower of London. When it came to crunch time at the Battle of Bosworth in 1485, Richard suddenly found himself friendless. Bad times, Richard. We would have tweeted you back, promise.

Julius was a man who knew how to get things done. He overthrew the Roman Republic and made himself the first in a long line of Roman Emperors, he was a successful warrior, and he led the first invasion of Britain. But, people weren’t so impressed by his military feats and considered him a bit of a dictator. With great power comes great responsibility and a duty to make your people happy. They were not. How could it have been resolved? Maybe a Twitter chat to see how his people were feeling or get their opinions on stuff. That could work.

Elizabeth I of England vs. Philip II of Spain

Virgin Queen and all round independent woman Elizabeth I had a penchant for irritating her brother-in-law Philip II. After her sister Queen Mary passed away and Liz became queen, she rejected Philip’s offer of marriage to do her own thing. To add salt to the wound, during the 16th century Elizabeth would quite happily accept Spanish gold from her nobles - who were basically pirates looting Spanish ships - and pretended it was all above board. Poor Philip, he should have made sure all that shiny gold had his lovely face stamped on it. We reckon it would have played out on Twitter a little like this... 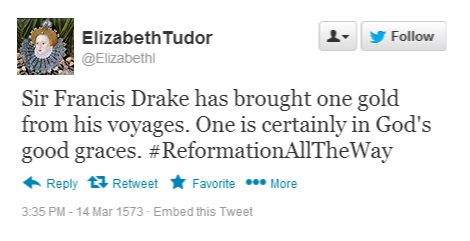 Typically, sensible people like to think carefully about what they want before embarking on a mission - because frankly, if you don’t have objectives it ain’t worth the risk. Ever heard about El Dorado? That mysterious land full of riches ruled by a king made of solid gold? Many a Spaniard went in search of this fantastic land, and many failed. Probably because it didn’t exist, but hey… More time making a map might have helped them get there. Or at the very least, they could have tweeted to ask for directions.

William Henry Harrison, 9th President of the USA, had a rep for lengthy speeches. In March 1891, during a snowstorm, the 68-year-old decided to brave it without his coat and deliver a 2-hour inaugural speech that was around 8,455 words long. That was edited, by the way. We can’t even begin to figure out how far over Twitter’s character limit that would be. Afterwards, he stuck around to chat to well-wishers before heading off to party the night away. Tweeting out that epic speech might forced him to be more concise, and it could have been done from the comfort of his armchair.

Henry II of England had an infamously short temper. Some claimed it was because he was a redhead, others might have said it was because he was surrounded by silly people. Either way, his big mouth got him into some serious spats. When his old friend and Archbishop of Canterbury, Thomas Becket, criticized him publicly, he freaked out. In the presence of his extremely loyal knights and BFFs, Henry II yelled ‘will nobody rid me of this turbulent priest?’. His knights didn’t realize that he was kidding and went chasing off to Becket to do just that. We wonder if they’d ever heard of trolls in the 13th century? This spat would definitely have been a case of thinking before you tweet.

James II of England and Scotland

James II found himself in a red hot mess when it came to dealing with the English. His Catholic ways were downright unacceptable in a country that had undergone a religious reformation. People were angry about his chilled attitude and tolerance towards other religious beliefs, which led to him being booted off his throne by his daughter and her Dutch husband. Oh James, if only you could have checked out the trending topics, or perhaps created a Twitter list of your supporters and enemies? That would have been useful.

We’re sure you’ve heard it before: timing is everything. George III wasn’t interested in giving a timely response to the dissatisfied colonies in America - though we’re uncertain how timely a carrier pigeon can be. The situation spiraled out of control when the Americans dumped a load of tea in the sea (we ALL know how Brits feel about their tea), and the English government responded with even harsher rules and restrictions for the colonies. We wonder how this incident might have played out on Twitter? 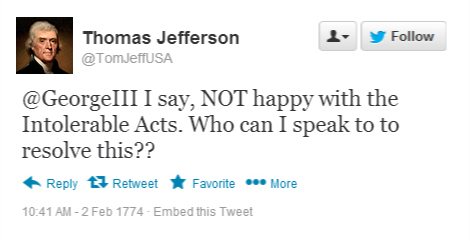 And finally, everybody’s favorite early modern playboy: Henry VIII and his intolerable indecision. The man got through 6 wives and had a love life disturbingly similar to that of a teenager. He switched wives with frightening frequency and had a love/hate relationship with the papacy which culminated in a brand new Church of England. Turns out Henry did indeed like it and often put a ring on it, before getting bored and moving on to the next woman in his life, in the never-ending quest for an heir. Didn’t he know that consistency is the key to being successful? P.S. We dare you to read his tweets without humming along.

See? Twitter could have completely rewritten the history books and made classes that much more interesting. Can you think of any other historical figures who you wish had Twitter accounts? Let us know!