Increasing The Performance of Your Twitter Marketing Campaigns With Personality Insights

Did you know that Twitter users with specific personality traits are 40 per cent more likely to redeem a coupon? Or that people on Twitter with certain characteristics are twice as likely to click through on your Twitter Ads? Those are the kinds of powerful insights that will help boost the performance of your Twitter campaigns, particularly, paid ones.

These conclusions were made by the team behind IBM Watson, who recently conducted a series of studies among Twitter users to understand how personality and behaviour can have an impact on social marketing. No doubt, then, that the ‘Big Five’ personality model is one to keep an eye on for future social marketing campaigns. 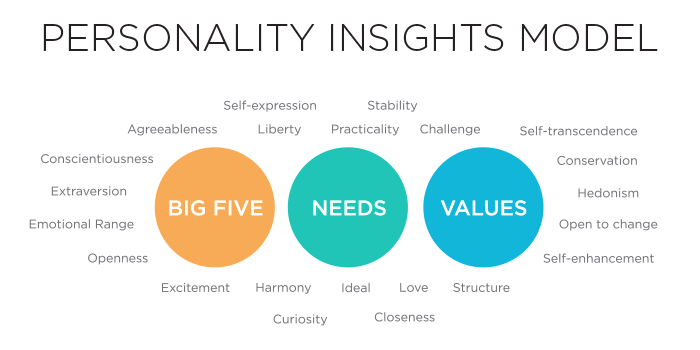 Responding To Tweets - A Study

The first study, ‘Responding to Tweets’ for information collection and spreading tasks, showed that those most likely to respond scored high on dimensions and facets such as excitement-seeding, friendliness, activity level, agreeableness while those least likely to respond scored high on cautiousness and anxiety.
The respondents were asked location-based questions or product based questions, depending on whether they tweeted about being in a particular location or owning a particular product. With Twitter’s current statistics on monthly active users (302 million) and tweets per day (500 million), it is most definitely a noisy world of unstructured and open source data. IBM Watson and SocialBro segmentation does not only allow brands to zoom in to the most relevant and engaged audiences, but also ensures that the money spent on Twitter ads isn’t wasted.

How Did Targeted Advertising Do?

Through IBM Watson’s three personality models, The Big Five, Needs and Values and their personality inference approach, it’s easy to derive the personality traits of a user through their past tweets. For this experiment, the team of researchers created a Twitter-based travel information service and hypothesized that Twitter users of high openness and low emotional range would respond more favourably to unsolicited advertisements of their services. They targeted the top 10 per cent users in the respective range, which resulted inçreases in click rate from 6.8 per cent to 11.3 per cent and in follow rate from 4.7 per cent to 8.8 per cent. Impressive stats!

It’s every retailer’s dream to know what sells and why, what is it that gets a consumer to redeem a coupon and if their campaign will have the desired results. IBM’s highly detailed data mapping provide these insights. In an experiment conducted with a large retailer, IBM sent customers redeemable coupons to validate their hypothesis that those who redeem coupons have the following traits: orderliness, self-discipline, cautiousness. It was validated by using customer data and their inferred traits. The conclusion? Those who rate high on the above traits and low on immoderation are 40 per cent more likely to redeem coupons.

Most brands these days are shooting in the dark. With minimal targeting and segmentation, they hope that their campaign message is going out to the right consumer. Relevant marketing is one of the most important aspects of Twitter marketing and brands are trying hard to get it right. Using a number of Twitter users, IBM conducted a study to understand if their personality traits (‘Big Five’, ‘Values’, ‘Needs’) predicted their brand preference. It was found that a person’s personality characteristics can predict their brand preference with 65 per cent accuracy.

Marrying this data on personality insights with highly targeted segmentation capabilities would help a marketer get the most out of their Twitter ads campaign.

For example: If you had to build a profile of your end-users & execute personalized Twitter marketing campaigns, all you’d have to do is take your brand’s global Twitter followers, add targeted segmentation like gender, language, keywords and match the relevant audience to IBM Watson Personality Insights (within SocialBro). This intense personality mapping would enable a highly detailed campaign to culminate with accurate and desirable results.

Personalization & Customization Gets A Big Boost

One of 2015’s biggest trends in marketing was predicted to be personalization and customization, and it’s here to stay. With every marketer scrambling to get a 360 degree view of the customer and ensuring that their marketing strategy follows the ‘customer centric’ line of thought, IBM Watson Personality Insights and in-depth Twitter segmentation and analytics does the trick. It takes Twitter’s global audience, maps out their personality insights and links it to Twitter’s segmentation, targeting and campaign execution, joining them in perfect harmony to drive better performance and increase revenue from your Twitter marketing campaigns.