FAQ: Everything You Need To Know About Retweets

Written by Rachel May Quin
Nov 27, 2014 9:28:46 AM
Tweeting and retweeting is part and parcel of life on Twitter, but getting to grips with the basics is more difficult than you originally thought. For example, if you’re being retweeted by a spam account and it’s getting on your nerves, how do you block a retweet? If you’re sharing an article from somebody else’s Tweet, how can you add retweet with a comment? We’re here to answer some of the common questions about retweeting on Twitter. Believe us, there’s more to a retweet than you could ever imagine.

P.S. If you’re looking for tips and tricks on how to craft Tweets that will get retweeted, this blog post is one to add to your reading list.

What is a retweet?

Retweets appear on Twitter as a normal Tweet, with the original author’s name and username next to it. Retweeting somebody else’s Tweet means that you are sharing it with your own followers so they can see it too! This is why sometimes if you’re scrolling through your stream, you might notice a Tweet from a total stranger that you don’t follow. Retweets appear in-stream and on your own profile page for others to see. Here’s what a retweet typically looks like.

It’s worth noting retweets can appear differently in third-party applications, so they’re not always identified the same way. If you’re using a mobile app other than Twitter’s official one, it may have it’s own special way of displaying retweets.

So you want to know how to retweet another user? If you see a Tweet you want to share, all you have to do is click the retweet icon (highlighted on the image below) and that’s it! You can check your own profile’s Tweet stream to ensure it’s been retweeted. When using Twitter desktop or the mobile app, the icon will turn green to show your retweet was successful. If you’d like to undo a retweet, perhaps because the retweet was accidental, simply click the icon again. It should turn white, undoing the action. 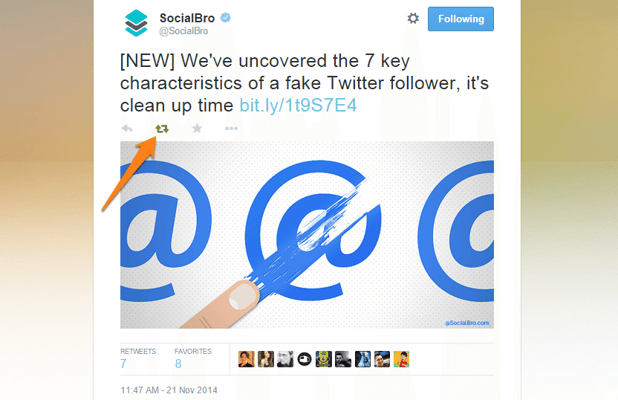 Can I turn retweets off?

If you follow somebody that reshares a lot of content from other accounts that do not interest you, it is possible to turn retweets off for that user rather than unfollowing. To turn off retweets for a specific user, go to their profile page and click the gear icon. Then choose Turn Off Retweets. Problem solved!

It is not possible to perform a mass function to turn off retweets for all users, you have to manually go to their profile pages and repeat the process.

Is there a way I can block retweets?

There is no official way of blocking retweets. If your Tweets and profile are public, than anybody is free to retweet and share your Tweets with their own followers. If you’d prefer your Tweets to remain private and for only your followers to see, you’ll need to protect your profile. We’ve written a whole blog post about what protecting your Tweets means and how to make your Twitter profile private, you can read it here. Essentially, a private Twitter profile means that followers are not able to retweet your Tweets.

As you can see, this Tweet is a little long to add a comment, there’s only one character left. It happens. To make room for your comment, try shortening or summarizing the original content of the Tweet. Typically you’d type MT (Modified Tweet) if you change any of the text or RT if you’re simply retweeting with your own comment. Always credit the original source when sharing content. Whether it’s the account that you saw the Tweet on, or if you're sharing an article, the original author of the piece. 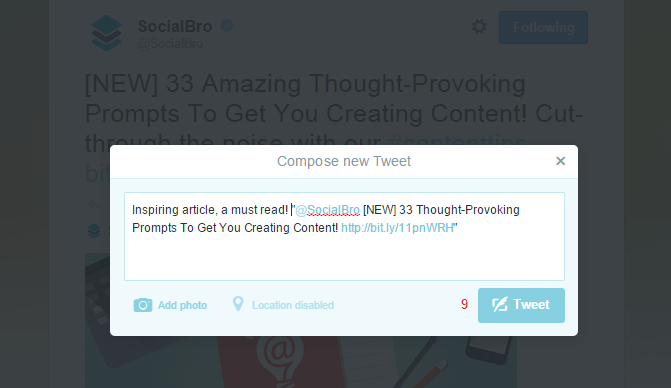 Can you set up automatic retweeting?

No, Twitter has a set of guidelines and best practice advice for automated actions on Twitter. Automatic retweeting is strongly discouraged and if you are considered a nuisance by other users, i.e. your account is being frequently blocked and reported as spam, it can lead to your account being suspended. Automatic retweeting defeats the purpose, as retweeting content is all about choosing Tweets you want to share with your own community, not overloading your followers with automatic retweets. Make sure there’s a human pressing that retweet button!*

*Note: no discrimination intended against any Tweeting animals. Sorry animals. 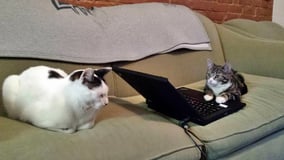 Got any more questions about retweets? Let us know in the comments and we’ll do our best to answer!