On Saturday 3rd June, the final of the European Champions League was contested between Real Madrid and Juventus at Cardiff’s Principality Stadium. We were following the event closely on social media using the Audiense Insights platform to gain an understanding of the audience following the game. Here’s what we found: 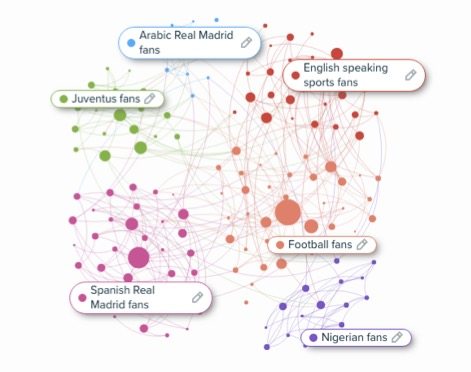 The UEFA Champions League Final audience and its segments

The chart to the right shows the different segments within the Champions League audience – there are six in total, which are as follows:

The Audiense Insights platform has automatically segmented the audience based on common interests and characteristics, including unique influencers, location, language, interests, demographics and even their personalities.

“The different segments that Audiense Insights identifies can influence several key decisions for brands. These can range from tactical decisions, like the copy used in online ads, through to more strategic decisions like audience targeting and personalising campaigns, products or services to the individual segments,” said Juan Fernández, Product Manager at Audiense. “We use artificial intelligence and machine learning to segment audiences. We base this on their interactions, information within the profiles of users and public information including demographic censuses.” 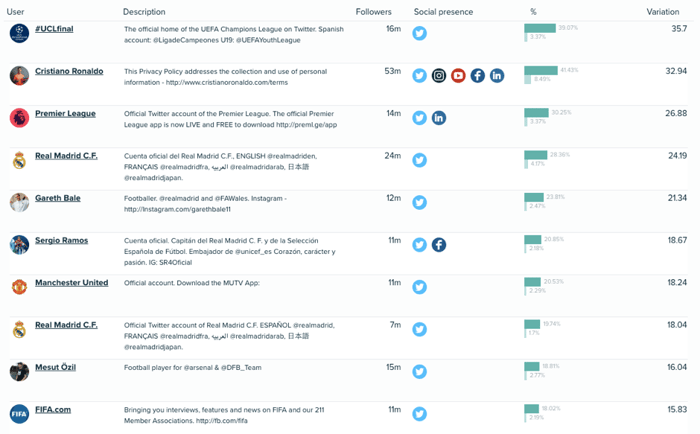 The unique influencers within the Champions League Final audience.

The 10 most influential accounts for this audience includes rival football clubs like Manchester United, key players from Real Madrid including Cristiano Ronaldo, Gareth Bale and Sergio Ramos and organisations including the UEFA Champions League, the Premier League and FIFA.

The interest profile of this audience

The personality of the audience watching the UEFA Champions League Final

As for the audience’s personality, which is derived from Audiense’s integration with IBM Watson, the UEFA Champions League final audience has very little interest in artistic or creative activities compared to the global audience. They don’t shy away from contradicting others and they’re compromising, meaning they’ll use every trick in the book to get what they want. They’re motivated to seek out experiences that give them a strong sense of organisation. They enjoy achieving their goals, are constantly seeking opportunities for personal development and to demonstrate their capabilities to others.

Any brand that wants to advertise a product or service to a very specific audience should consider the emotional factors that move the audience if they really want to connect with these consumers. In this regard, the enormous amount of public data available is a great source of strategic knowledge on audiences and target audiences for brands and agencies.

A few years ago, companies spent months researching their target audiences (with market surveys, focus groups, etc). Today, you can access information about consumers in real-time with unimaginable depth thanks to social media. It now takes a couple of clicks and a matter of hours to organise the data into something actionable.

Previous Story
← #BotsInAction - Blue Robot: All about that Bot
Next Story
Do you know what makes your prospects buy? →